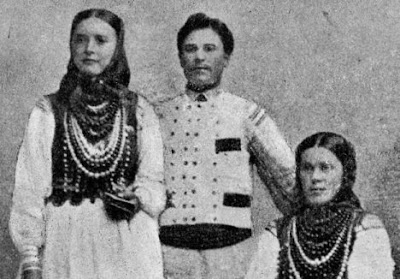 Hello all, today i will talk about the 'mystery stitch' of Krzczonow. For the remainder of the costume, see my last two postings. The cut of the shirt for both men and women is the same, with shoulder insets, 'przyramki' in Polish sewn above the body pieces. For a schematic see my first Krzczonow posting. The older shirts were embroidered on the collar and cuffs, and as you can see from this old photograph, often on the shoulder przyramki. Later on, the shirts began to be embroidered around the front opening as well.
The embroidery consists of linear designs, travelling around the cuff, across the przyramki, down the front,
and on the collars, the design runs across both ends, and then lengthwise along the back edge. So that the whole thing looks like this old shirt. 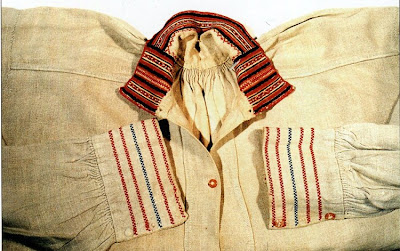 You can clearly see the cut of the shirt in this image. The only real difference between the mens and women's shirts was that the collar is bigger on the woman's, almost like a sailor type collar. Today,  you will also see the embroidery on the mens shirt extending lower down the front, because the men often wear the kaftan, which is open in front. The woman's kaftan is never worn open, and the gorset only shows the upper part of the front of the shirt. Here are two recent examples. 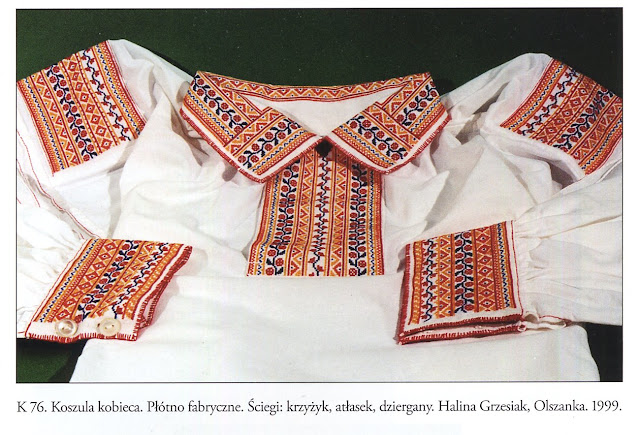 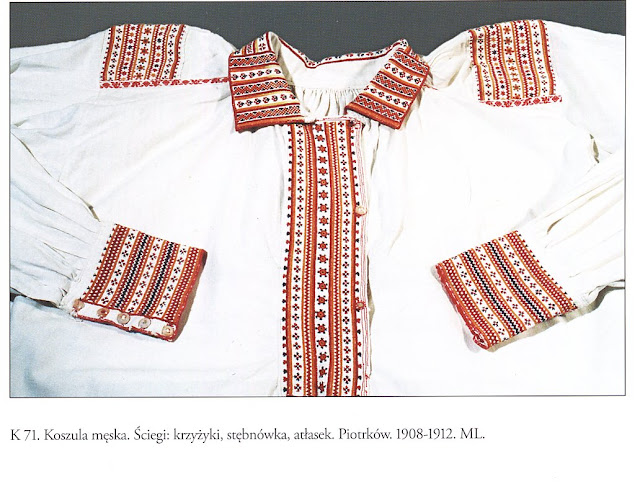 You can see the typical color palette of this region, black, red, yellow with some green. These pieces are done in the modern style, with  cross-stitch. There seems to be a general tendency for many embroidery traditions to migrate to cross-stitch from older techniques, because it is easier. I find this regrettable, many local traditions and unique expressions get lost this way. At least in this region they have developed a style of cross-stitching that is unique and recognizeably of their own tradition. See this photo of a woman doing crafts. 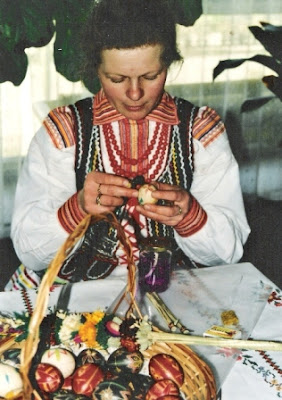 What happens very often is that they start cross-stitching roses, and then go to satin stich roses, [and always blue ones, for some reason] so that they completely lose their own particular tradition. I have seen this in my research from many places around the world,some specific regions of  Mexico, Holland and Albania come to mind. Krzconow has so far escaped this, although i did find this one photo. Some of my Polish books have said that at the beginning of the 20th century, there was a fashion in Malopolska of embroidering in 'Rus'ky' style. [read Rusinsky, e.g. Ukrainian style] 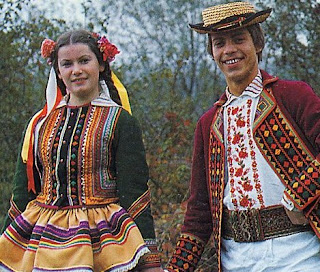 Originally, however cross-stitch was not used. the oldest information we have is from the 18th century, when the woman's costume was made of unbleached linen,with a finely pleated skirt and apron. The collar however was the same shape, and embroidered with the same layout in white cotton, like this. 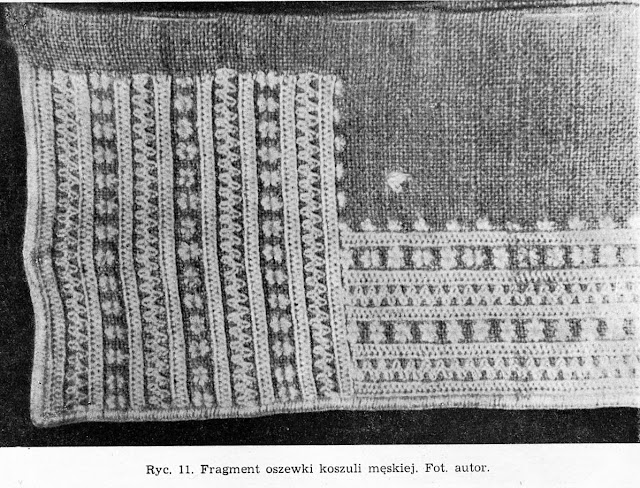 A little later on, some red, and then some black was added, as in this photo 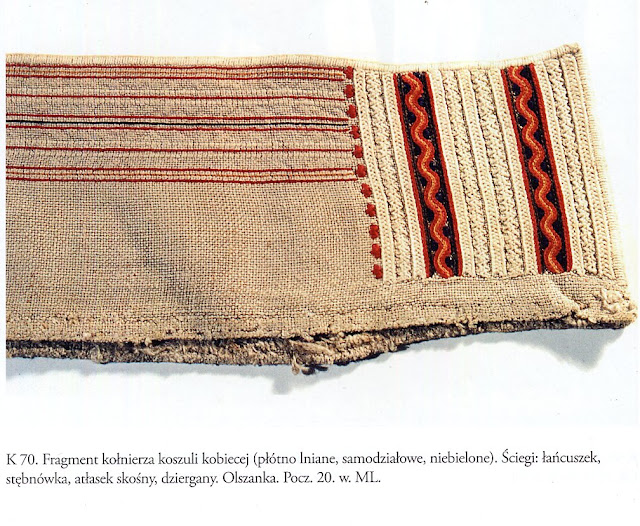 Ok, i see back stitch, i see buttonhole stitch around the edges, i see wavy lines and zigzags made from chain stitch, i see lazy daisy flowers, i see counted satin stitch filling in small areas, but i could not figure out how those wider lines were done. Janusz Swiezy and Aleksander Blachowski said that they were rows of herringbone stitches, although Blachowski does not dwell on the techniques. Here is a drawing by Swiezy of some of the embroidery motifs

You can see the stitches well represented, the 'mystery' stitch is part of the grouping in the lower right corner. Not a convincing representation. It is not herringbone. This explanation was also picked up by Elzbieta Piskorz, as shown here. 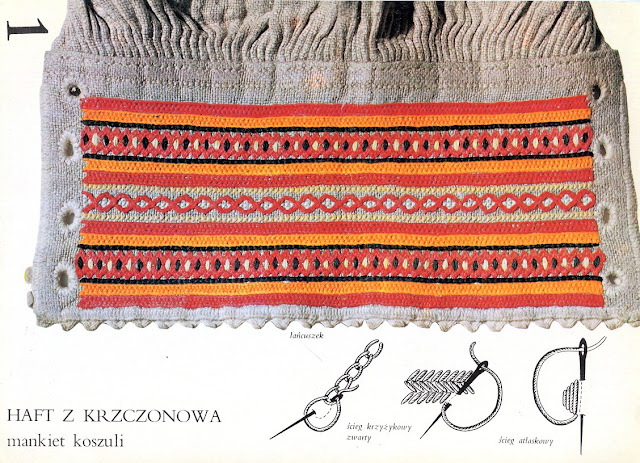 This is from a later period, when more colors had been added to the embroidery tradition. Very attractive. These are the same colors which are still used in the cross stitch tradition. Lets take a closer look.

Very pretty, but that is NOT herringbone. Notice that some cross-stitches are part of the overall design.
Kazimierz Pietkiewicz says that this stitch is a combination of a braiding stitch, 'Janina' edged by two rows of backstitch. Hmm, yeah that's what it would look like, but i don't think that is right.
Jadwiga Turska puts a couple of drawings of this type of embroidery in her book, but does not adress the identity of this stitch directly. You can see her drawing them in this image here below, the wider horizontal lines. 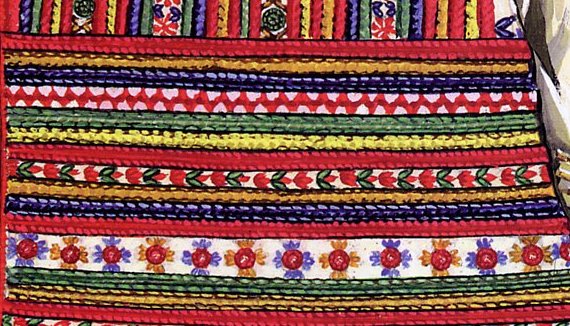 I saw the same stitch in a Bulgarian book. I said, that's it! But it gave no explanation of how to do it. 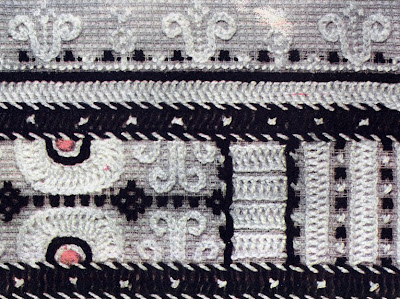 Then i found this description in a general book of folk embroidery by Margaret Ohms. "Turkmen stitch. This stitch resembles a closed feather stitch...forms a characteristic ridge on either side of the crossed filling."
Turkmen Stich? Turkmen?
So i took a look at a piece of Turkmen embroidery that I have, and sure enough, look at this. 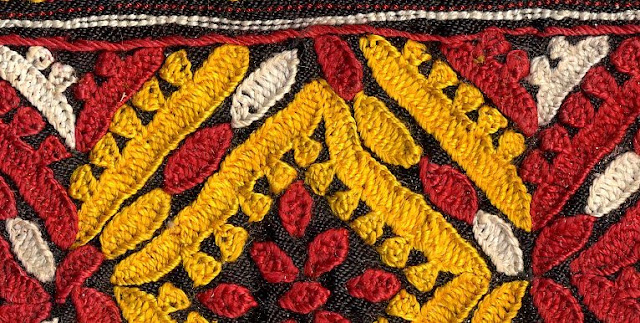 It's the same stitch! The composition and design are very different, but it's recognizably the same technique. Ted Zed suggested that it could have been brought to Poland by Tatars. Well, its possible, but i doubt it. In actuality, this is a variation of the chain stitch, sometimes called closed double chain stitch, in which a wide chain stitch is executed alternately to right and left. Chain stitch is very old, and while it is typical of the Tatars and Central Asian Peoples, it is also widespread in Europe, from Horodok in Ukraine to the Smocks of England. So there is no need to go seeking a foreign origin of this technique. So i am convinced that i have solved this little mystery. I was very surprised that no-one seemed to have noticed this before. But i do embroidery myself, and i always look at a new design with the idea 'would i want to do that?, do i know how to do that?' Here is Margaret Ohm's depiction of how to do this stitch. Notice how the beginning leaves a characteristic gap, at the top in this diagram. 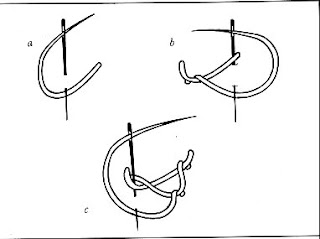 And here we see the same gap, at the bottom of the stitching

So i had to try for myself, here is what i made, a little rough, but i am not practiced at this technique.
I will get better, and i am now convinced that i could make a Krzczonow shirt. This is somewhat magnified, by the way.

So i will leave you with two images of a collar from the heyday of this type of stitching, a black and white photograph that shows details of the stitching, and a color drawing that shows the colors. I like the way that rickrack is used to imitate tatting. 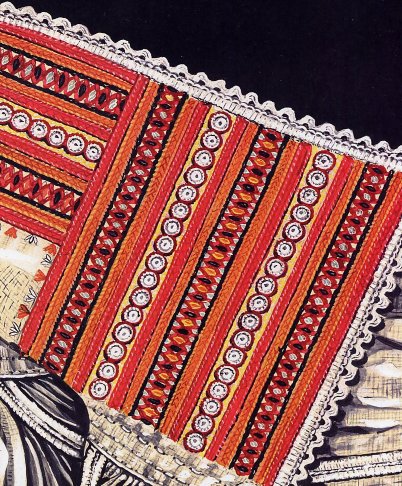 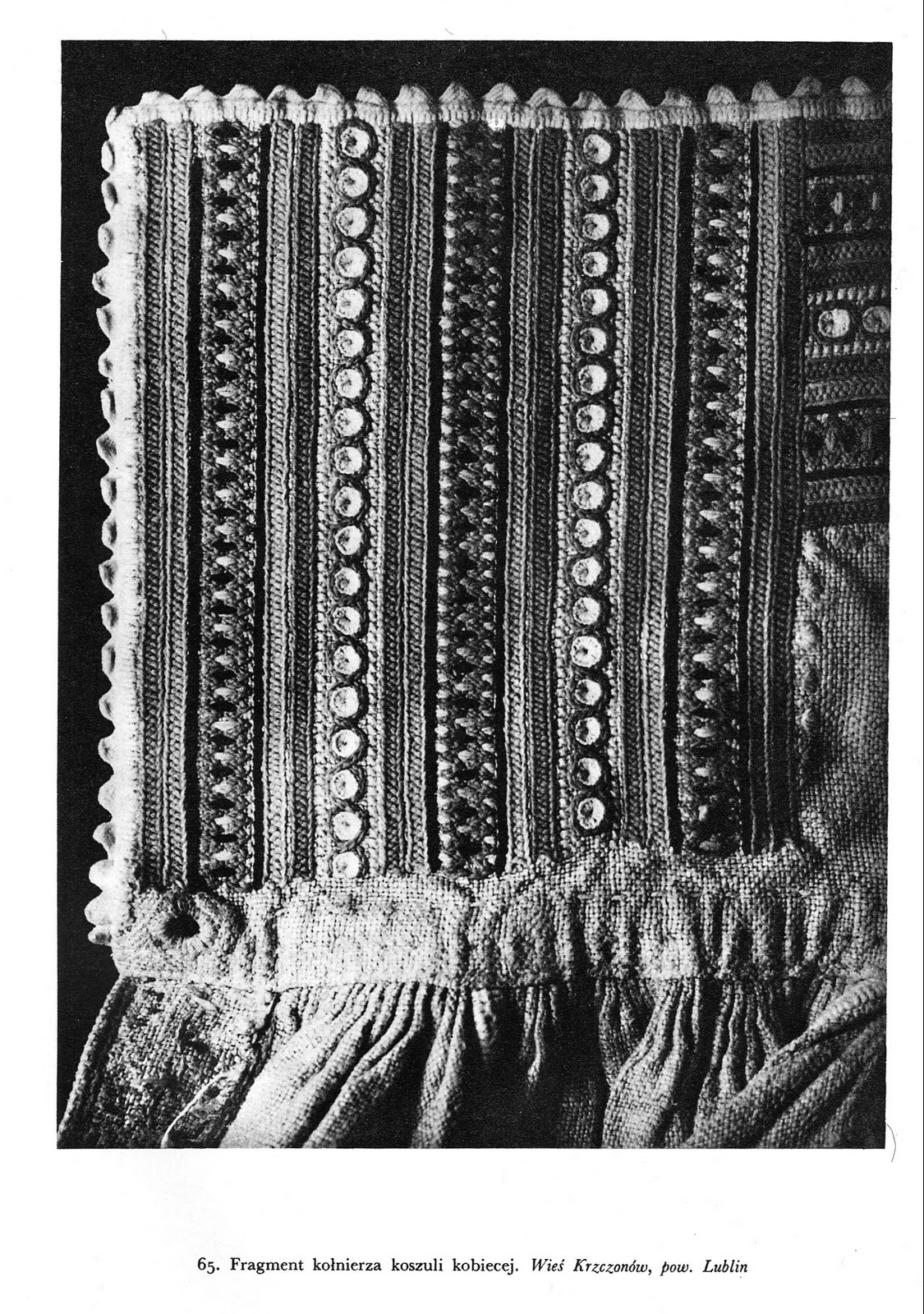 If there is anyone out there who does not do embroidery, i hope you did not find this too tedious.

Thank you for reading, and tune in again. I believe we are done with  the Krzczonow costume. I expect all of you to be able to go out and make one now.
Go and be creative.
And hello to mr. Calabash.