Orest requested this for a friend of his. This proved to be a bit of a challenge. I covered the Hutsul costume in a couple of my previous posts, and often in photographs, the shirt is simply not visible. By the time the Hutsul man puts on his kyptar, his serdak, slings a bag over one shoulder, a powder horn on a strap over the other shoulder, you can't see his shirt.
Nonetheless, I have come up with some information. What i see in my library are two kinds of shirts, one is what has become the standard Ukrainian shirt, with Hutsul embroidery on the band collar, the cuffs, and especially down the front. This is perfectly fine. Here is an example from my personal collection. By the way, for you textile enthusiasts out there, embroidery may be reproduced perfectly well on a copier or a scanner. This is a scan of one of my shirts. You can see the typical Hutsul style 'nyzynka' embroidery. This is the color scheme that has become synonymous with Hutsul ornament in the minds of many people. In fact, the Hutsuls use a wider palette depending on the particular area. The embroidery was done on a counted thread material, as you can see on the inside of the collar. The cuffs, collar and front plackets were then sewn onto thin cotton which was made into the shirt. Here is a closeup of the embroidery This type of shirt has become standard all over Ukraine. Mean wear it with modern slacks when they wish to be somewhat formal, or show their identity, or participate in a festival, and it is often worn with a suit. It is also used in stage costume, or by local performing groups. The only current distinction between regions is the type  of embroidery, of which Ukraine has a tremendous variety. But even this is often ignored. The older traditional shirts tended to have embroidery which stopped halfway down the front, or even shorter, but the modern shirt usually takes the embroidery to the beltline. The embroidery varies in width from about a centimeter for each strip, to wider than the collar. This dates back, more or less to the 1950's, about the same time that women started cutting the chemise in two parts horizontally, to be able to wear the embroidered shirt with modern clothing. Here is a photograph showing a man wearing this type of shirt. Note that his does not actually have a cuff. Both cuffed and cuffless shirts are known.. You will also notice that his shirt has the traditional constuction, with the so called 'drop shoulder'. [the only kind of sleeve that anyone wore until recently, but it has become necessary to explicitly tell people that no, you don't need that curved seam at the point of the shoulder]. 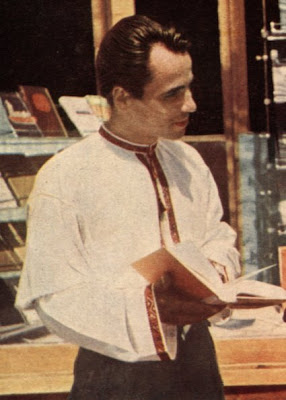 As for the traditional Hutsul men's shirt, i did find one schematic for a shirt from Kosmach.

One piece for the body of the shirt, folded over the shoulders. Sleeves joined at right angles to the body. Neck opening cut into the middle of the shirt body, Panels under the sleeves to widen the shirt, plackets under the arms. Embroidery on the cuffs, turn down collar, along the sleeve seam, and around both the front and sleeve openings. Note that the embroidery does not extend past the opening. Typical Kosmach embroidery, which will be the subject of a future posting. This is borne out by some of the old photos I found. These two were in the posting about kyptary. 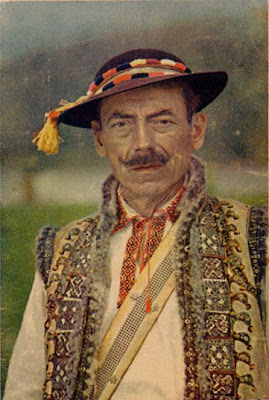 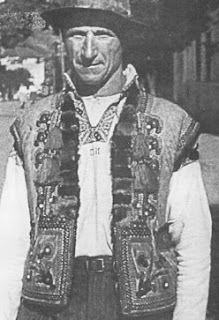 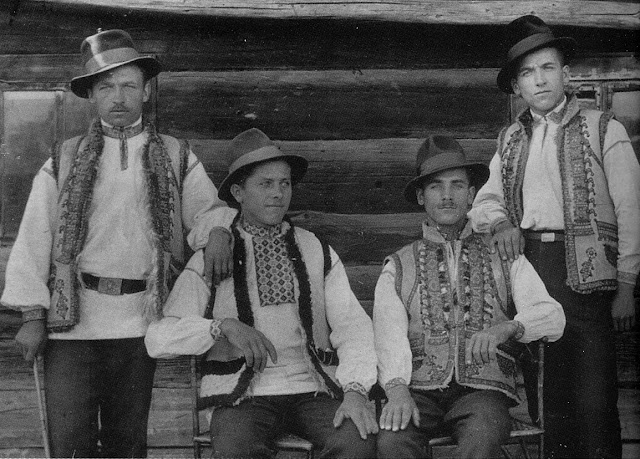 You will notice a wide range in the extent of the front embroidery, from none at all, to a narrow strip, to a wide singe fold over placket. This is still typical today, depending on how ambitious the individual embroiderer is. In keeping with Kosmach tradition, all of the shoulder seams show a narrow strip of embroidery, this is not the case in all of the Hutsul region. The shirt is traditionally worn outside the pants, reaching to mid thigh, with no embellishment on the lower hem. You will sometimes see a narrow strip of embroidery, or some whitework or hemstitching, [merezhka] but this is confined to individual villages or particularly ambitious embroiderers. Mens work shirts were sometimes not embroidered at all, while women's work chemises always had at least a narrow strip. here is a group of Hutsuls most of whom are in everyday summer clothing from Pechenizhinsk. 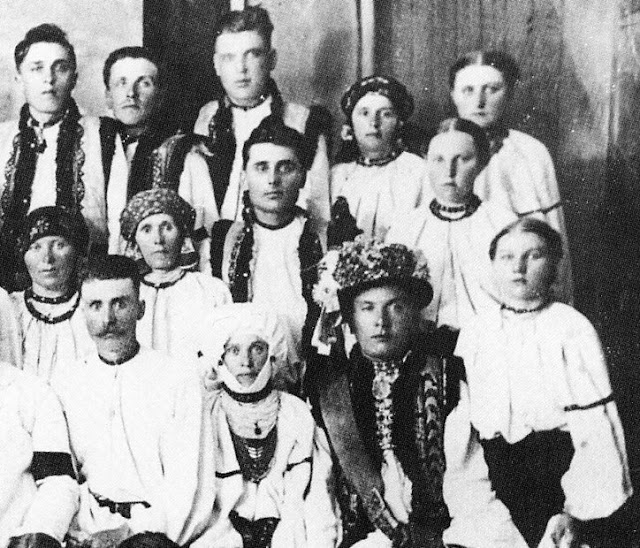 You will notice the narrow collars and lack of front embroidery on many of the men, while the one young man in full regalia has embroidery around the front shirt opening, but not extending any lower. Not all Hutsul shirts had fold down collars. Here is an example from the village of Biloberezka, in the county of Verkhovyno, showing a band collar, and the typical cool color scheme of that area. This shirt was made in 1939, I am not sure how old the custom of putting the little colorful addendum underneath is. Hutsul shirts were apparantly always gathered into cuffs, which makes sense, given the cool weather in the mountains.  Here is a closeup of the cuff of another man's shirt from the Verkhovyno area from the 1970's. You will notice the floral design, which was a popular development in the nyzynka technique at the time. This area uses a unique form of gathering which gives this texture. Instructions may be seen on pgs 139-140 in Tania Diakiw O'Neill's wonderful book, 'Ukrainian Embroidery Techniques'. Hutsuls do, in fact do other kinds of embroidery, especially in those areas which border other regions with their own embroidery tradition. But conversely, Hutsul embroidery has been widely admired and copied in lowland regions, especially eastern Halychyna, around the city of Ivano-Frankiwsk, to Lviw and other city areas, adapted in parts of western Podillia and Bukovyna, and even in Poland and Hungary.
I suppose I should stop here. I find I have trouble confining myself to discussions that are appropriately short enough for a posting. One topic always leads to another.

I am trying to do research on the traditional shirts of Halychyna. I would like to appeal to my readers if they have any material on the costume of the area from Nadsannia to eastern Halychyna. This is one of those 'blank areas' which appear on the maps of folk tradition and costume in most countries, where industrialization came early, with the resultant loss of the local tradition. Or perhaps distinctive traditions never materialized. My own family is from this area. The costume of the Yavoriw area is of course well known, and the costume of the southern strip of foothills has some attestation as well. I would love to obtain information about the costume of the rest of Halychyna, especially around Peremyshl and east of Lviw. Thank you in advance.
And thanks to all of you for reading. I hope you found this interesting and inspiring.