Hello all, today i am going to do a quick and dirty posting,  By which i mean that little research was required. I will cover the history of the rubacza, [shirt] embroidery in the Lowicz region. Pronounced Woah- veach to rhyme with beach. Most people pronounce it this way, but some purists insist it should not be a W, but a dark L. This is one of the Big Three when it comes to Polish costumes, along with Krakow and Zakopane, and is extremely well known, besides being a living tradition to this day. You can go to the region on Corpus Christ, or some other holiday, and see the people all dressed up. The costume is very well known, so i will not talk about it today. I am not original in talking about this development, it is well known. I will cover the embroidery on the shoulder, cuff and collar of the women's rubacza.
In the 19th century, the typical embroidery was mainly chain stitch, stem stitch, back stitch and other related stitches that were arranged in semi geometric designs that were very beautiful and graceful, but somewhat modest. Here are three examples. 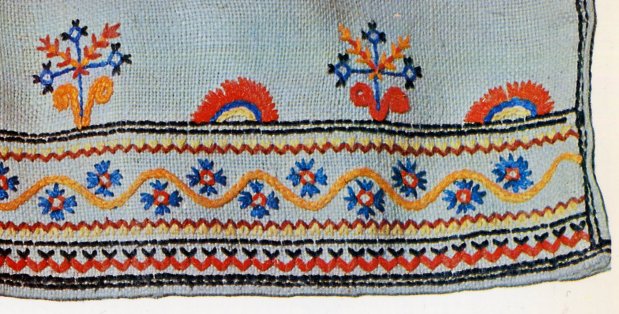 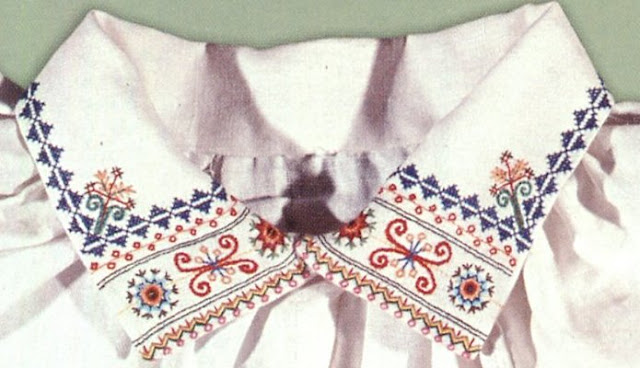 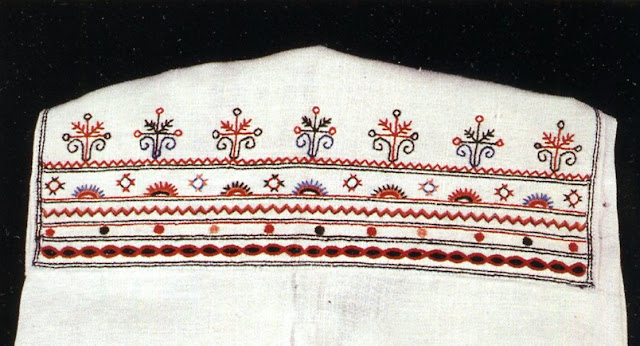 This tradition is being revived today, for table linens and such, it is quite a lovely style.
The entire costume was developing though, and was becoming more colorful and flamboyant, while the linen used for the shirts was becoming finer. So they switched to a standard colorful cross-stitch style, which while attractive, was not very unique, as in these examples. 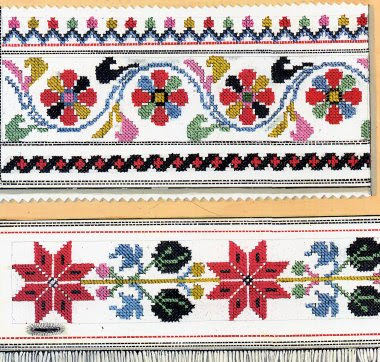 Still later, the move was to naturalistic floral cross stitch, reminiscent of Berlin Work or Danish Flower Embroidery. The results are quite lovely, but even less distinctive. Here are a few examples. I have seen some of this work in museums, and the stitching can be incredibly tiny and very impressive. 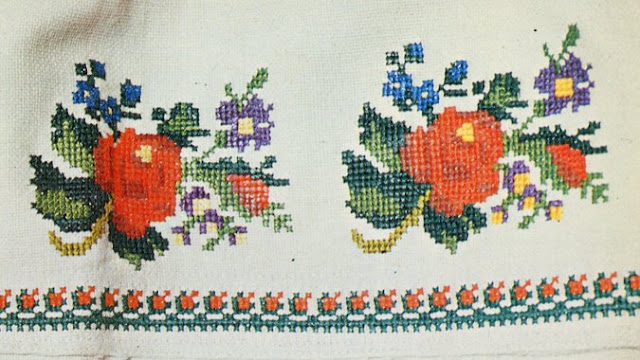 Still later, the move was to satin stitch, in part because they no longer weave their own linen, but buy it commercially made, with a weave so fine that counted thread work is simply not practical any more. It remains floral, with pansies, forget me nots, violets, and of course, roses. 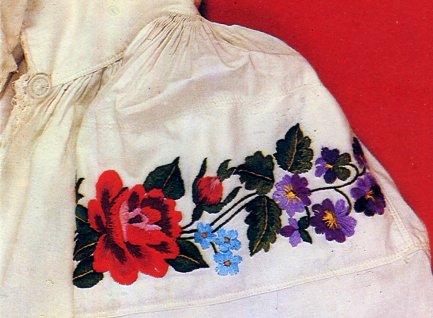 The most recent development has been the loss of the cuff completely, the sleeves shortened slightly and cut in a bell shape, and the addition of Richelieu embroidery on the collar and lower sleeve. 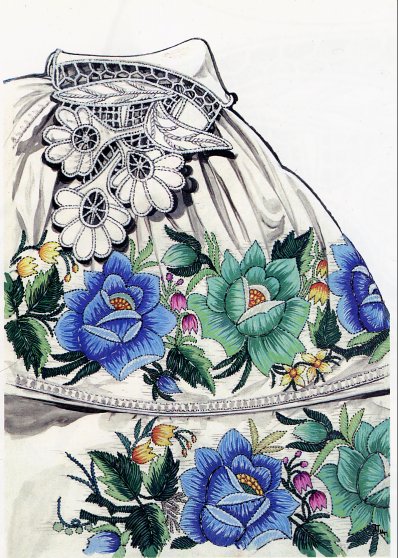 And there they are! Blue Roses! Very pretty, quite flamboyant, but not as unique or distinctive as the original embroidery style. One would be hard put to distinguish this embroidery from that of Volendam in Holland, or the modern Huipil embroidery from central Mexico. But then, folk embroidery has often followed the common fashion. Many of what we think of as distinct local traditions started out as widespread fashions that were only remembered in a few places, e.g. Hardanger and Poltava cutwork, which were originally from the same Renaissance tradition.

I hope this proved interesting, I will occasionally put up this sort of easy posting. In fact, i could post one Ukrainian embroidery design a day, and not run out for years. While i enjoy covering details and history, one of my major objectives is to display folk costumes and embroideries for admiration and inspiration.
I hope that i have inspired some embroiderer to make something today.
Thank you all.
Please feel free to contact me for requests for research, or commissions to research/design a costume for a performing or other group, or to make or embroidery something for an individual.
Roman K.

Here is a video showing the costume as worn today
http://www.dailymotion.com/video/x6stno_lowiczanka-jestem_music