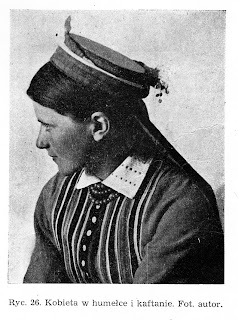 Hello all, Welcome again to Krzczonow, Lublin Province, Poland. I thought that the original posting was starting to run long, so i decided to split it. This posting will cover one garment only, the Kaftan. For the rest of the Krzczonow costume, please refer to my previous posting. I will be writing a posting on the historical development of Krzczonow embroidery in my next posting. Kaftan is a rather generic word meaning some sort of overgarment, usually a long one. In Krzczonow, and some other parts of Poland, kaftan specifically refers to a short jacket. I will talk about the men's kaftan, and two closely related types of the women's kaftan as well. The woman here on the right is a young married woman wearing the slightly older form of the kaftan. The kaftan is of a  solid material, usually wool, with ribbons sewn on the front parallel to the opening, each of which turns at a right angle and continues around the waist. The colorful ribbons alternate with strips of plain cloth covered with decorative topstitching.
The following two photos also show the old style woman's kaftan.

The ribbons are often of different colors, but the main colors used are black, red, yellow and green.
here is a drawing of an old kaftan, showing details of the ornamentation. 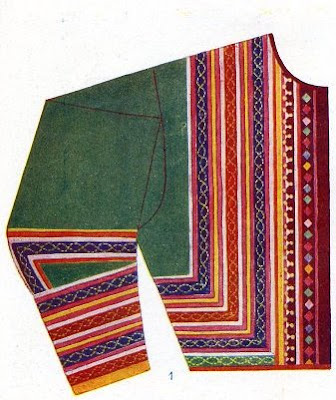 And this is a schematic of the cut of the woman's kaftan. Notice that the cuff is a separate piece, there is no collar, also there is no peplum, the garment ends at the waist, and it buttons down the front. 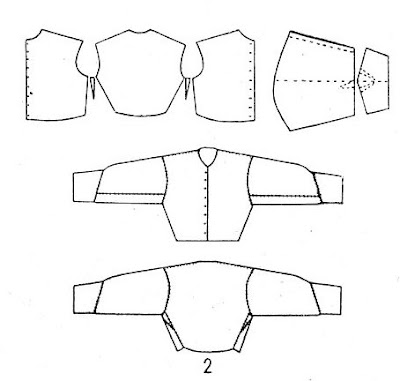 Next, Here is a photo of a modern version of the man's kaftan. These two are students at the Jagiellonian University of Poland who participate in their dance group, Slowianki. 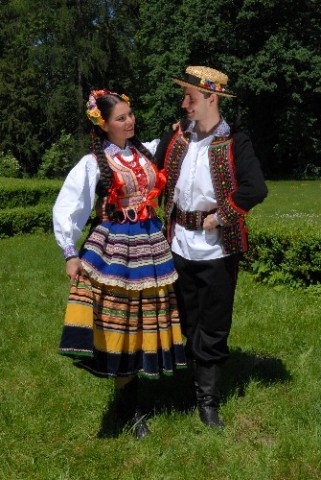 Two wide strips of black or dark cloth are then sewn to the front edges of the kaftan. Each has one, two or three rows of diamond-shaped openings cut into them, which are called 'okienki', [little windows] under the openings are sewn pieces of plain colored red, green and yellow ribbon, each of which shows through one of the openings, in a form of reverse applique. These wide strips are then secured with topstitching in a contrasting color, which binds the edges and also adds a decorative effect. In one form of the kaftan, the outer edges are cut in a toothed or saw-edged design, and rows of colored ribbon are sewn underneath the edges, which are also topstitched as in this drawing. All this is repeated on the cuffs. In the photo above, you see a variant of this which is common today, in which the edges of the wide strip of cloth 'z okienkamy' are cut straight and edged with a short brush fringe, to give contrast to the edges. 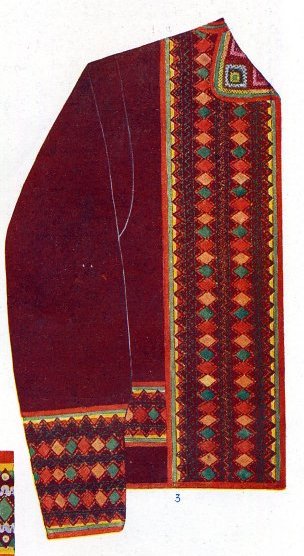 Following are a couple of other photos of old kaftany. 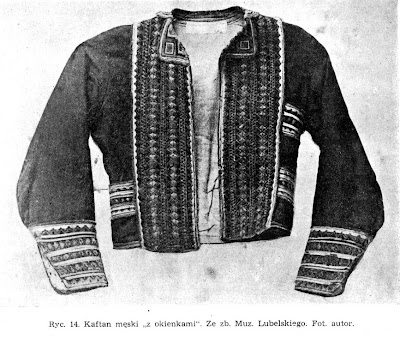 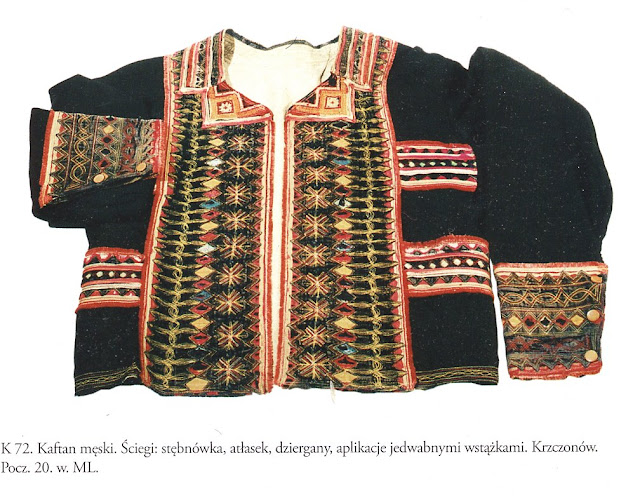 The front top corner of the kaftan is folded back and tacked into place to form a small lapel. This is ornamented either with embroidery, or appliqued ribbon, around the edges and in a little square.
Then a rounded collar is sewn on to the back, also edged and ornamented with stripes of narrow ribbon. Here is a closeup of the collar in the black and white photo above. 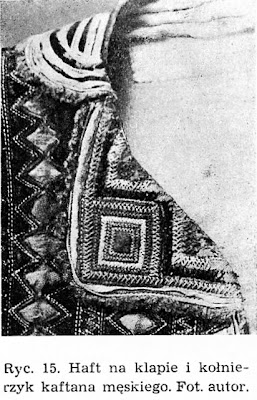 There seems to be some variation in the back of the garment. Some people, like the group Slowianki, sew an additional similar strip around the waist in the same manner, the ends of which are under the strips sewn on to the front., like this. 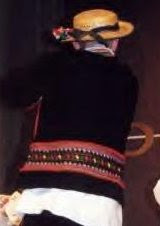 This would seem to be consistent with the drawing above. However, examination of the two photographs might lead one to conclude that there is no such strip, but rather three patch pockets sewn on to the front of the kaftan decorated in the same manner, with reverse applique, ribbons and topstitching. If you consult the video of the dance group 'Mazowsze', you will see that they sewed separate patches on the back of the kaftan rather than one long continuous strip. I don't know if there is a 'correct' way. I suspect there were always variations. I have provided links to dance videos of both Mazowsze and Slowianki at the end of this posting.
The man's costume is completed with a belt worn over the shirt and under the kaftan, either made in the same reverse applique method, like this:

or made of velvet with gold trim and sequins sewn on, like this.

Somewhat later, the women's kaftany were also made 'z okienkamy', with ornamentation in this same reverse applique and topstitching method. A full, gathered peplum was added to these kaftany. The peplum was ornamented with rows of ribbon in the same way as the skirt and the apron. Here is one artist's depiction of this type of kaftan. 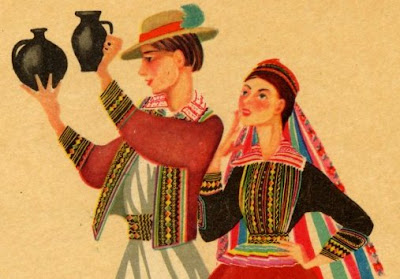 Here are two photos showing the front and the back of a woman's kaftan 'z okienkamy'. 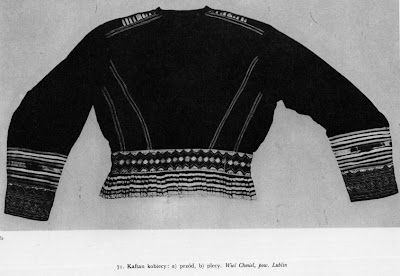 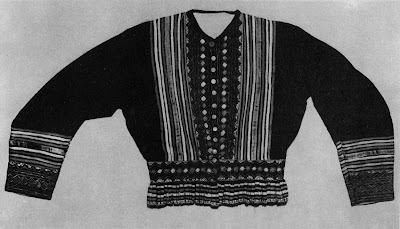 And finally, here is a closeup of possibly the same kaftan drawn by the textile artist Jadwiga Turska. The round red objects are the buttons. 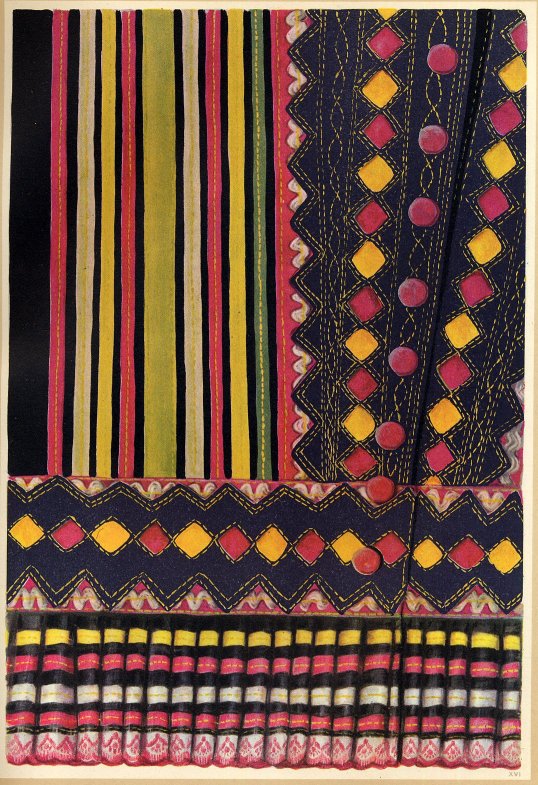 Thank you very much for reading.
Stay tuned for the next exciting installment, lol.
As always, i encourage you to use these ideas to create something. Help these beautiful ideas and items live again in a creation of your own.
And as always, i welcome any requests for research, as well as any commissions to make, research or embroider costumes or other textiles.
Roman K.

And here is a link to a company in Krakow called Perfekt, who make and sell Polish [and some other] Folk Costumes for stage groups and others. They are quite good for stage costumes, although not the equivalent of having one made in the village, which would be very difficult.
.http://www.perfekt.krakow.pl/stroje/lublin
﻿
Feel free to contact me with requests for research. I hope to eventually cover all of Europe and the Former Russian Empire/Soviet Union. I also gratefully accept tips on source materials which i may not have. I also accept commissions to research/design, sew, and/or embroider costumes or other items for groups or individuals.