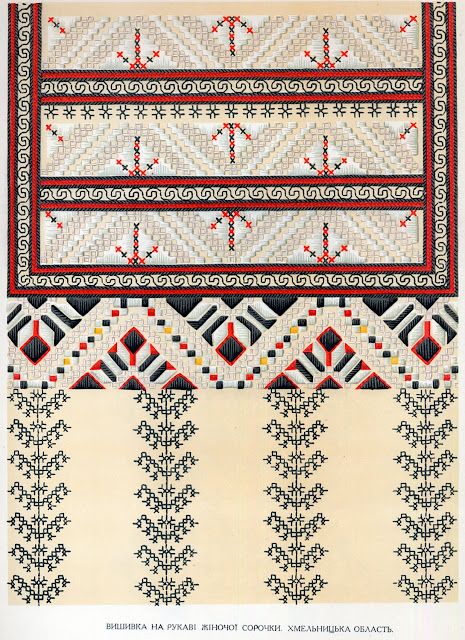 Hello all. I have been working a lot and have limited time, but i wanted to put a short post in. I talked in my first post about the three-part embroidery on the sleeves of traditional chemises from Podillia, Bukovyna, Moldova and Wallachia. I have here three examples. Often charted or painted examples do not bother to explain the arrangement on the sleeve of the three motifs.
This first one is Ukrainian,
from the Khmel'nytsky oblast [administrative region]. Which is part of Eastern Podillia, the section which was under the Muscovite rather than the Austrian Empire. The upper portion of the embroidery is done in flat stitch, also called counted satin stitch, in white thread on off white linen. Between the motifs are diagonal lines of outline/holbein stitch also in white, over 4 threads, most likely. The outlines are composed of braid or long legged cross stitch, with a wave design in between also of outline or Holbein Stitch. There are large cross stitches in red and black seperating the areas of flat stitch. The second design, which occurs at the level where the sleeve is no longer stiched to the body of the shirt, but to the piece of cloth which forms the inside portion of the sleeve, is usually somewhat longer. In this case, with black and white flat and outline stitches with accents in red and yellow, echoing the upper design. [for the cut of the chemise, see my first blog enty, Podillian Pillow Embroidery]
The vertical stripes, which continue down to the wristband, are composed of a black outline stitch design.
Ukrainian shirts of this type often have 3 completely different designs, whereas Romanian shirts often have the top and bottom designs based on the same motifs.
This design is published in the book 'Ukrainske Narodne Dekoratywne Mystetsvo' 'Ukrainian Decorative Folk Art' subtitle 'Dekoratywne Tkanyny' or 'Decorative textiles' Head Editor V. Zabolotny, Kiev, 1956.
There is an old tradition of artists painting designs like this, i assume because the available photographs were black and white, and of very poor quaility up untill quite recently. The Artist who painted this image was V. Kasian. Many older books, and even some recent ones, are full of Artist's images like this. It is an art form in and of itself. 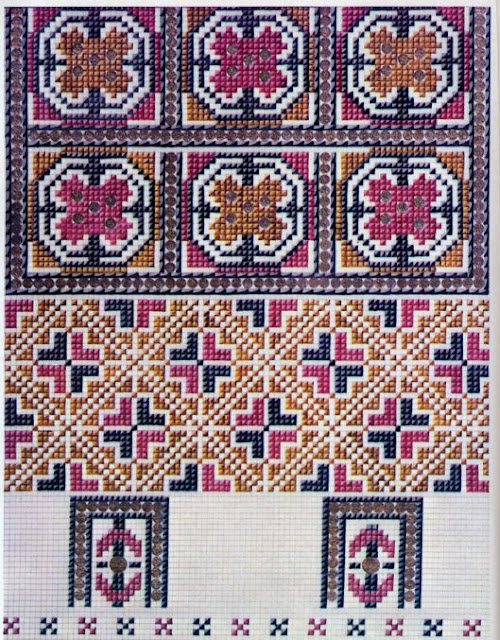 This second image is of the sleeve embroidery of a chemise from the Brichany district of independant Moldova. All three designs are almost completely executed in cross-stitch, reflecting the simplification of design which occured in the 20th cent. This again was painted by a textile artist, the individual stitches being depicted as tiny pyramids. The round objects are flat metal sequins, quite common in this type of embroidery, at least in some regions. They would normally be without the cup that sequins in America usually have. The oulines in the upper part are depicted as elongated cross stitches, which i assume would be the braid or long-legged cross stitches as shown in the first image. At the bottom is a narrow design to be used on the wristban, collar and the front opening of the chemise, the stripes would also continue the length of the sleeve, as in the upper design. This image is taken from the book 'Moldavian National Costume' by V. Zelenchuk, Kishinev, 1985. In Romanian, the upper part of the desing is called altita, 'upper part', the middle design is called incretul [insert?], and the bottom stripes are called riurile. This third design is not an actual painting of the embroidery, but just a charting of the stitches. The upper and lower designs are based on the same motif, in black and red cross stitch and holbein stitch. Notice that there are two different desigs which alternate for the lower sleeve stripes. These stipes do not continue around the sleeve, but are only executd on the outer portion. Again there is a border design shown at the bottom for wristbands, collars and front opening. The central design, you will notice is not shown by stitch. This may be done in cross stitch, but more traditionally would be executed in flat stitch, adding variety to the finish of the stitching. Again this is the somewhat simpler design typical of a later period. The boutique blouses sold today executed on cotton gauze might well feature this design. This design is from the town of Pipirig in the district of Neamt, in Romanian Moldavia.
The chart is from the book 'Broderii Traditionale si Artizanale Moldovenesti' by Ibrian and Dunare, Bucarest, 1984.
Happy stitching, i hope this inspires some of you.