I decided in my first blog to talk about the piece that i chose as the background of my screen. This is the piece in full. 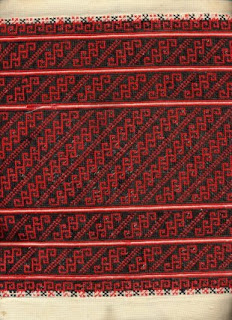 It is a case for a decorative sofa pillow, embroidered in cross stitch with herringbone stitch for the edges. It was embroidered by my mother in 1957, and she finished it about the same time as i was born. Embroidery is extremely important in Ukrainian culture, even today. You can see the detail of the stitching at the edges of this page. Here is a graph of the design. 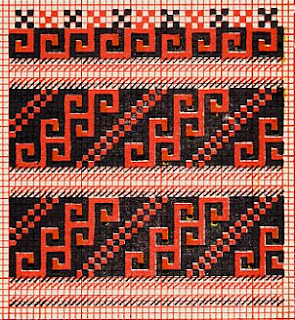 There is a Ukrainian Women's Magazine called 'Our Life' out of Philadelphia to which many people subscribe partly because they feature an embroidery design on the back cover of each issue.
This design was originally used as part of a rectangular shaped piece of embroidery done on the top of  woman's sleeve, on the shoulder-upper arm area in Podillia. Traditionally, a design such as this one is repeated horizontally, seperated by embroidered lines, and also edged on the vertical sides with lines and often a small embroidered motif such as that at the top of this one. The main ground color is usually black, and the design is usually very densely worked, if not covering the entire ground of the cloth. here are a couple other examples of such designs. The ones i have chosen for today are done in cross stitch, but other stitches are also used. 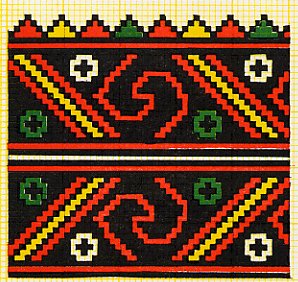 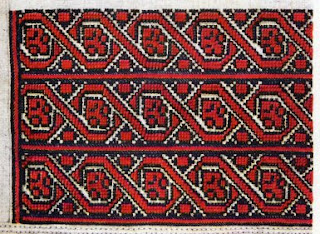 Under this patch of embroidery, there is most typically a wide horizontal stripe of embroidery in a different design, most commonly in a completely contrasting color, and often in a completely different stitch or stitches. this hangs on the sleeve somewhat above the elbow. The rest of the lower sleeve is covered with embroidered stripes, either vertical or diagonal. Here are just a couple examples. 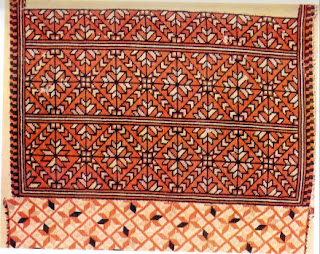 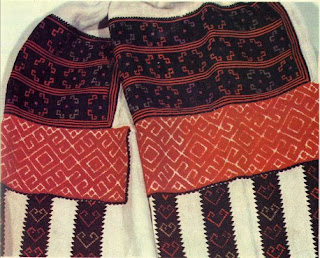 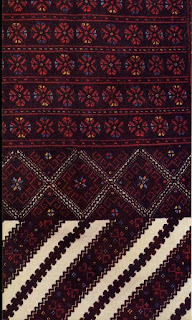 The sleeves for this chemise are cut in one piece, which is unusual for Ukrainian Women's Costume.
The shoulder pieces are usually cut out seperately, and are almost always the focus of the embroidery.
The cut for Podillia is this. 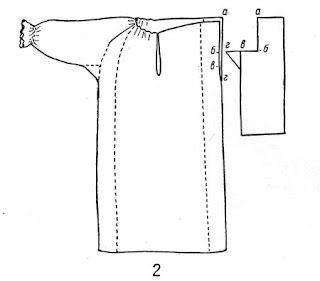 The seams shown on the body of the garment are
determined by the width of the looms in the peasant houses. If one is making such a garment today there is no reason to be restricted in the placement of the vertical seams on the body. The chemise, or Sorochka, is the base garment for all Ukrainian costumes. As you can see, the garment covers the body roughly to the ankles or somewhat above. Unusually for Ukrainian costumes the bottom hem is not embroidered. Starting around the 1950's or so, women would often make the chemises in two pieces, to make the equivalent of a blouse and a slip, so that it could be worn with modern skirts or even pants, but originally it was one long garment. The cuffs are often finished by gathering into a wristband, rather than gathered into a frill, as shown.
This is one of the 5 main types of Ukrainian costumes, [about which i will compose a blog later], the costume with the Obhortka. The Obhortka is one of the overskirt types used in Ukrainian costume. The word Obhortka means 'that which is wrapped around' It consists of a rectangular piece of cloth, woven from wool,
heavy and stiff with narrow stripes or designs at both ends, and a border, like so. 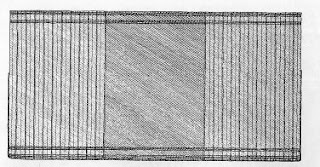 It is wrapped around the hips so that the ends overlap in front, and secured with a wide wool sash, wrapping twice or more around, the ends of which hang down in back. This costume is most unusual in that it is not normally worn with an apron.The garment is also called the Horbotka, as a result of dyslexia, i assume, or the Fota, which is the Rumanian word for the garment.

This basic costume is worn in Podillia, Pokuttia, and Bukovina, and the same basic costume is also worn in Moldova, the Romanian province of Moldova, and Wallachia. There are differences in the colors and designs of the embroidery, the designs woven into the obhortka, the overall length, and other details.
Most commonly, one of the front corners is lifted and tucked in at the waist, for ease of walking. Sometimes both corners are tucked up. The completed outfit is worn like this. 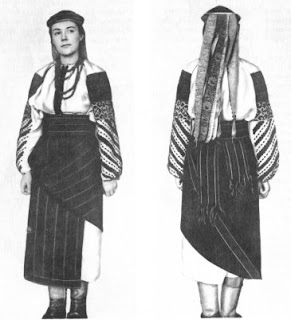 For the benefit of those who are wondering where Podillia is, here is a map of the western part of Ukraine.
Podillia comprises the two areas labelled as II-4. 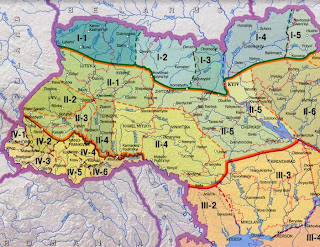 This map is from a new book called "Traditional Ukrainian Clothing" vol 1 by O. Kosmina, printed by Baltia Druk in 2008. A wonderful and useful book.

This completes my first blog. I am open to what people would like to find out, and i am always willing to do research on a specific topic. Thank you for reading and please give me feedback.