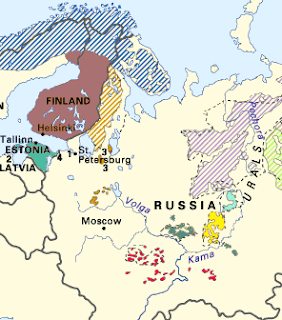 Hello, This blog will be about one version of  the Folk Costume of the people who call themselves the Mari, in older documents they are referred to as the Cheremis. They are distant cousins of the Finns and Estonians, speaking a Uralic language. On the map their territory is shown in a dark army green color, south of the word Russia, and north of the Volga. There is another settlement shown east of the Kama river. There are three main branches of the Mari People, the Hill Mari, the Meadow Mari, who both live in the Autonomous Republic of Mari El, the main area north of the Volga, and the Eastern Mari, who live east of the Kama River. The capitol of Mari El is Yoshkar-Ola, and this is their flag.

This map shows some of the ethnic diversity in the Russian State, in fact there is even more, because this map only shows the Uralic peoples. The Chuvash, Tatar and Bashkir people also occupy this area. I will do a series of  posts concerning these, who are referred to as the Volga Peoples. The costume i am addressing today is this one, found in the State Museum of Ethnography of the USSR

This costume is typical of one group of the Meadow Mari, called the Shymakshan Mari, who occupy the central portion of the Mari El Autonomous Region. This Costume is very rich in embroidery, and is obviously one worn for festive occasions, the headcovering shows that this is for a married woman.
Here is photograph from 1914, showing Mari people at everyday tasks. 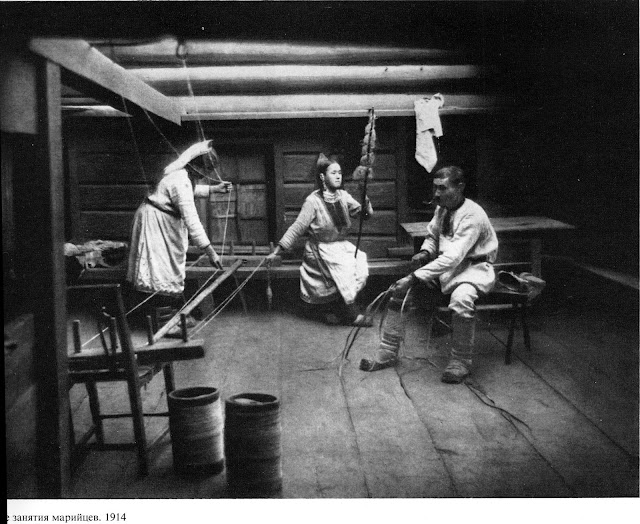 The Man is plaiting shoes from birchbark strips, the girl in the center is spinning, and the woman on the left is laying out warp for a loom. 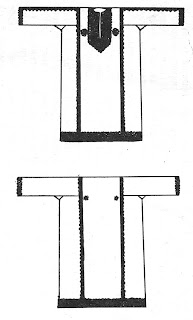 The basic garment is the chemise, as it is for many other European peoples. The center portion is made of one long length of linen, with a hole cut for the head, which extends the length of the garment both front and back.
The sleeves are each one width of linen sewn at right angles to the main body. and there is a third length of linen sewn into the sides of the chemise. There is a gusset sewn into the intersection of the side panels and the sleeves. There would have to be a small slit in the side panels to admit the gusset, which is square. In later garments the gusset is often of red calico. The width of the panels is determined by the width of the home loom on which the linen was woven. Embroidery is executed along the hem, the cuffs, the neck opening, and the vertical seams. They do patterns of Holbein Stitch in dark brown or black, but more commonly they do patterns of slant stitch, sometimes called Slav Stitch, rather like a half cross stitch in dark red, with small amounts of other colors, outlined with Holbein Stitch, with many little hooks.
This is typical of the Volga area, and is also found in Bulgaria.
Here is another chemise, showing detail of the embroidery. The chemise is folded in half in this photograph, showing both sleeves on the left side. 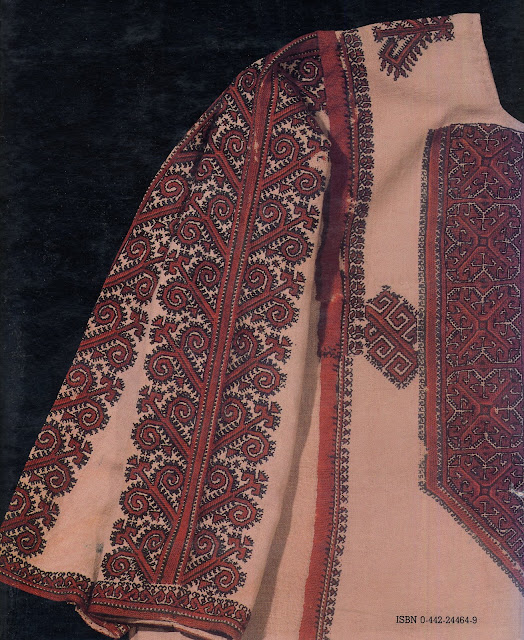 and here are a couple of examples of the sleeve embroidery from a couple other chemises. 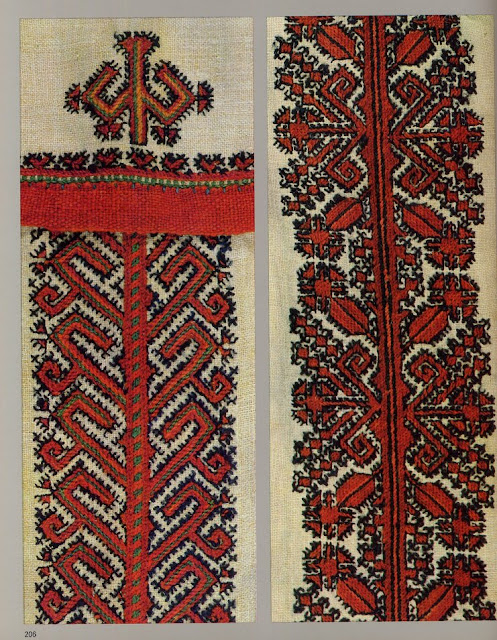 The pointed headpiece is called the Shymaksh, which gives its name to this particular costume. The Shymaksh is a rectangular piece of cloth, with one short end sewn together to make a small hood. You can just see this in the top photograph, under the kerchief. You can also see the woman on left in the black and white photograph wearing the shymaksh without the kerchief. This figure shows how to prepare the hair for wearing the shymaksh, using a small birchbark cone. Amazingly useful stuff, birchbark! 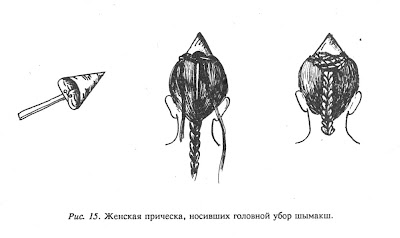 The Shymaksh is hung on this little cone, and the flat end hangs down in back. The seam at the front and the bottom edge are embroidered.

here are a couple examples. 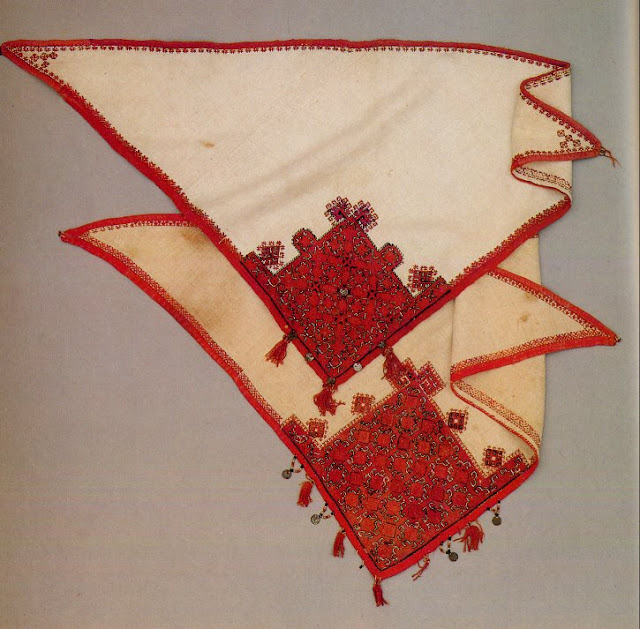 There are linen pants worn under the chemise, in cold weather woolen cloth is wrapped around the lower legs and tied in place. Footcloths, and either bast shoes, or boots if one can afford them are worn on the feet.
There is a simple rectangular embroidered apron and a woven sash. 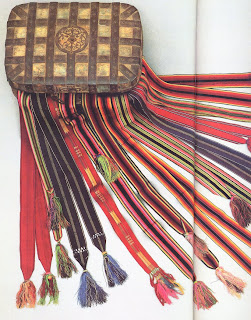 Here is a more contemporary photograph of the Shymaksh costume. Notice the hemline is quite a bit shorter than either of the above examples. This also shows how the kerchief and Shymaksh look like from the back. 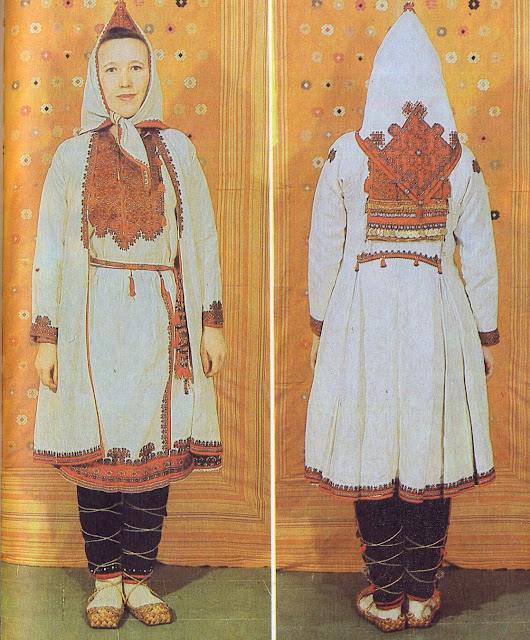 This woman is also wearing a linen caftan over the chemise. If you look closely at the black and white photo above, the middle woman is wearing an ornament around her neck. similar ornaments, adorned with beads, coins, tassels, fringes, etc. are very common in the Volga area among all the various peoples, worn either around the neck, slung over the shoulder or hung from a waistband, as we will see. Here is one example of such an ornament as worn by the Mari. 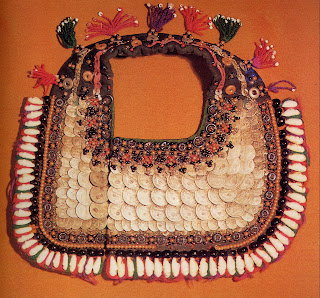 The Men's outfit consists of linen pants, a sash and a shirt which is very similar in cut to the woman's, except it is shorter, ending above the knee. The everyday shirt is made with minimal or perhaps no embroidery. The festive shirt is embroidered, like the woman's chemise at hem, cuff, and neck opening. Unlike the woman;s chemise the seam embroidery does not extend all the way to the hem, but rather crosses the body of the shirt at some point below the sleeve. Here is a schematic. 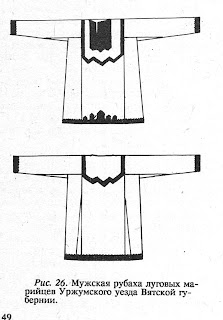 The cut shown here is somewhat different from the one shown above for the chemise, either variation may be used for both men and women. Here as one final image is a young couple, the girl not yet married and wearing a headband instead of the Shamaksh. 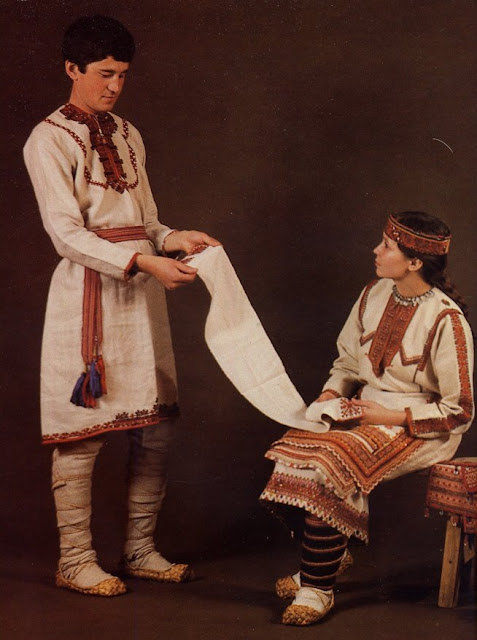 Thank you again for visiting my blog, and as always i welcome comments, corrections, and suggestions as to the subject to be researched.