Foreign Embroidery in the Ukrainian Tradition

Hello all. I intend to continue my series on the Volga region costumes, i have yet to cover the Moksh-Erzya, [Mordvin], and the Chuvash, i am waiting for the arrival of a couple of books that will provide more information on this topic.
Today i want to talk about two particular embroidery designs that have come from outside Ukraine but have become very important in Ukrainian Culture. This is the first one. 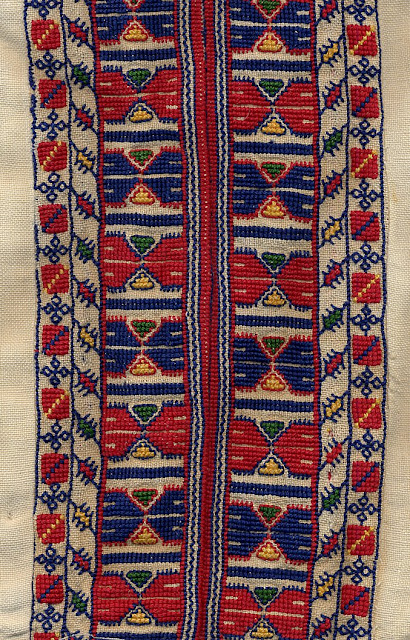 This piece was embroidered by my late grandmother, Maria Kozak. Believe it or not, this image is a bit larger than life-sized. The original piece has about 20 cross-stitches to the inch. Originally it was made for a shirt that she embroidered for my father, some time in the 1930's. After he outgrew it, she took the embroidered pieces and made them into a cover for a sofa pillow. This is very typical. In any Ukrainian home where someone embroiders, you will find several decorative pillows lined up on top of the back of the sofa. 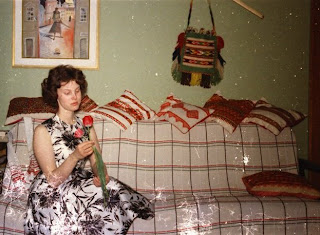 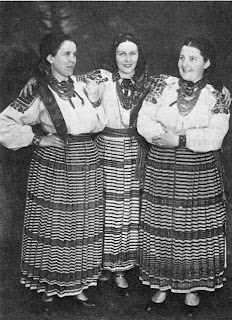 The image on the left is a photograph of my grandmother taken in 1935, about the time that she embroidered this piece. She is the one on the right. This photograph was taken in the city of Lviw, during an event that was called a "Folk Costume Fashion Show". Many photographs exist of this event. I admit to wishing fervently that i could go back and visit it with a high-resolution color digital camera. The image on the left shows my grandparent's flat in the 1950's. The admittedly cheap couch is covered with a cloth woven in crosswise stripes and many embroidered pillows. I always remember her house and that of all of her friends being full of embroidery in this manner. That is my mother sitting on the couch. This image was remastered from an old slide, which explains the scratches. On the wall is one of my grandfather's paintings and a woven shoulder bag from Ukraine. 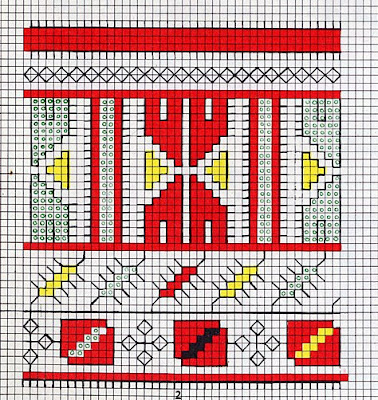 Here is a graph of the design shown at the top of the posting. The green circles indicate that the area should be embroidered in blue cross stitch. This graph is taken from the book 'Ukrainian Embroidery Stitches Designs and Stitches' which was published by the Ukrainian Women's Association of Canada' in 1958. It was not unusual to graph designs with symbols representing various colors. Blue is rare in Ukrainian Embroidery, and adding an extra ink color would substantially increase the cost of printing. This design is universally referred to as 'Polubotok'. It is definitely not a design that fits into the Ukrainian embroidery tradition, especially not the northeast region, which it is associated with. The name refers to Het'man Pavlo Polubotok, from the Chernyhiw region, who lived from about 1660 to 1724. He was an important figure in Ukrainian History. You can read more about him in Wikipedia here. http://en.wikipedia.org/wiki/Pavlo_Polubotok

I half-remember a story my grandmother told me that Het'man Polubotok obtained a shirt embroidered with this design, whether as loot or ransom or a gift  I have read in other sources that he married a foreign woman who wore this design on her chemise. In any case, according to my grandmother, the design was copied far and wide by embroiderers because of its connection to this important person, and because it was different from what they were used to. The design is more reminiscent of the embroidery of the Volga region or of the Balkans, [which have a historical connection through the Bolgar tribe] than of Ukrainian embroidery.But because Het'man Polubotok stood up to the Romanov Tsar, fighting for the rights of Ukraine, this design has become almost a symbol of Ukrainian Identity. In more recent years the design has often been embroidered in sky blue and gold, which are the Ukrainian National Colors. It is also widely embroidered because its various components lend themselves to being rearranged, so being able to form many compositions. Here is one example. 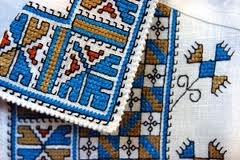 This piece was embroidered by Nina Ipatiy. She is a very accomplished Ukrainian embroiderer who makes her work available online. She is very skilled, and her website is worth a visit.
Embroidery by Nina Ipatiy
Here is yet another example in another color scheme.

(c) 2006 D. Dmytrykiw Ukrainian Ethnographic Collection, Archives, & Library of Avon Lake, Ohio; used by permission.
This item is part of Danylo Dmytrykiw's collection of Ukrainian Costumes and Embroidery. You can see this and other items from his collection at the Website of the Ukrainian Museum of Cleveland.
Their website is also well worth visiting, with many wonderful examples of Ukrainian embroidery and other folk arts. http://www.umacleveland.org/embroidery.htm
The polubotok image is on the bottom right. You can click on it to see a larger image.

The second design i wish to talk about it this one. 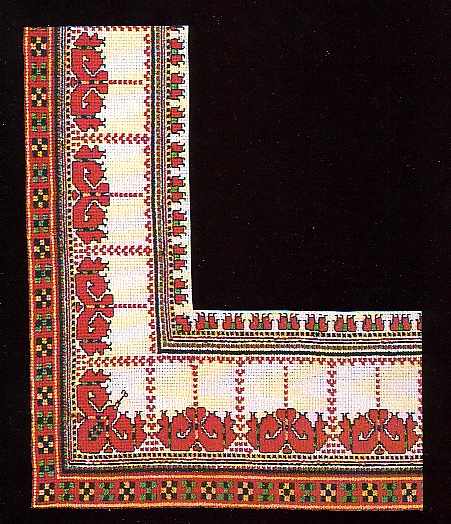 I noticed this design appearing in Ukrainian households all over the place a couple decades ago.
I was very mystified, as it does not  resemble traditional Ukrainian designs at all. I found out that this image had been published in the book.
Invincible Spirit"...
"Art And Poetry Of Ukrainian Women
Political Prisoners In The U.S.S.R."
Smoloskyp Publishers, 1977
Baltimore-Chicago-Toronto-Paris
This book published poetry and photographs of embroidery created by women who were being held in Soviet camps for political prisoners. These women were standing up to the Soviet government, asking for basic human rights, and for their speech, writings, and participation in demonstrations were locked up for years in concentration camps. These embroideries were made by these women while in camps in the Mordovian Autonomous Republic.
It was then that the source of this design became clear. If you compare this design to the ones in my previous blogs on Mari and Udmurt embroidery and costume, it is clear that it is from the same basic tradition. The biggest difference is the replacement of the slant stitch with cross stitch. One of these women must have picked up the design, or the idea for the design from the local Mordvin women. Once it was published, many Ukrainian women copied the design as a sign of solidarity with their sisters suffering in the concentration camps in the Soviet Union. So this foreign design has now become an integral part of Ukrainian Culture and history. I wish to stress that the imprisonment was the work of the Soviet Government, and has no reflection on the Mordovian People. The Soviets made a habit of transporting political prisoners out of their homelands to hold them among people foreign to them. [I also apologize to any Moksha or Erzya who might read this for use of the term Mordovian, i do know better, and i will do a posting on this issue in the future, but it is simpler for the sake of the item under discussion.]
For a fuller explanation of this book, and its contents see this website.
http://www.artukraine.com/old/embroidery/mordovian.htm

These two small glimpses into history show how art and design become part of the fabric of our lives,
and how they can have very strong significance to a nation and to individuals.

As always, thank you for reading. I welcome your input, and corrections.