Hello all. Today I will give an overview of Hutsul Costume. The Hutsuls are a Ukrainian tribe who live in the Carpathian mountains at the point where they bend from extending east to extending south.
The Hutsuls wear the third type of Ukrainian Costume, the double apron costume. This costume is amost as commonly depicted as the Poltava/Central Dnipro region costume in depictions of Ukrainians. In fact, the Hutsul region is rather small, but the Hutsuls occupy a huge place in Ukrainian culture, literature and song. In spite of that, the Hutsuls do not have a politically recognized district of their own. They live in the eastern end of the Transcarpathian oblast, around the town of Rakhiw, the southern end of Ivano-Frankiwsk oblast,
south of the town of Nadvirna, the western end of the Cherniwtsi oblast, west and south of the town of Vyzhnytsia, and a small adjoining area of Romania. Despite how this may sound, this is a compact area that forms only one region. This is not uncommon for mountain people, as flatlanders tend to draw the borders, and they seem to think that along a mountain ridge is a good place for a border. The three oblasts mentioned maintain the historic division of Ukrainian territory between Hungary, Poland, and Moldavia, respectively. 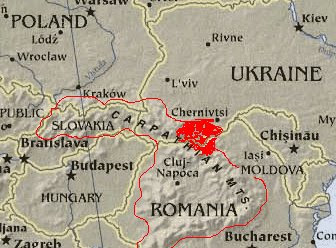 This is, very roughly, the Hutsul region. I have a much more detailed map, but i have not been able to figure out how to color it to make the different regions visible. I can email it if someone is interested.

Here are a couple of  historic photos of  Hutsuls. This is an old Postcard, pre 1910 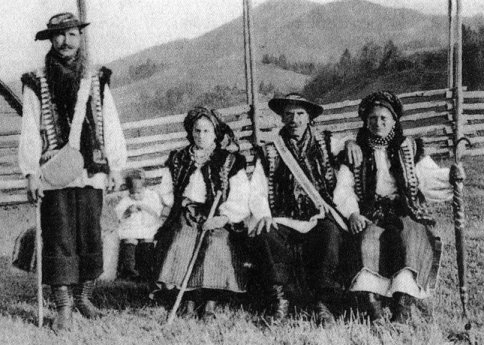 And here are a couple of photographs taken by Oleksander Pezhanskyj. 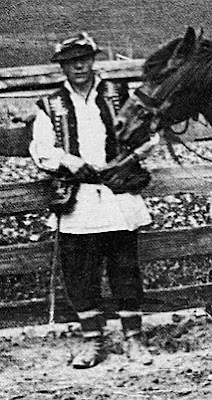 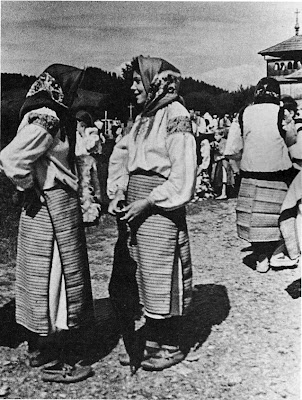 The basic item of the woman's costume, is [of course] the chemise. In Ukrainian it is called the sorochka. The front and back of the chemise were made of separate pieces. There were shoulder insets, called ustawky, which were sewn to the sides of the chemise, rather than on top, as is more usual in Ukrainian costumes. The four pieces were gathered into the neckband. The Lower sleeve was sewn perpendicular to the body of the chemise and to the ustawka. Both the body and the sleeves were less full than in other parts of Ukraine, as well as being made of  heavier linen. Here is another photograph that shows the cut of the chemise. 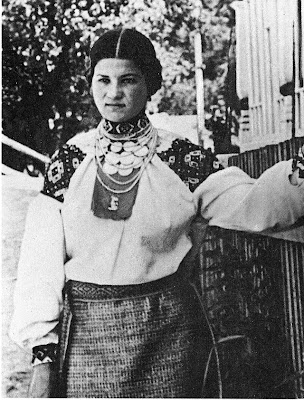 As you can see, the shoulder piece is embroidered in a wide band along the lower edge, next to the seam.
The lower sleeve is often slightly gathered, with a unique technique that gives the gathering a specific texture.
The embroidery in most villages was of the technique known as nyzynka. This is basically a darning stitch, which is found from Norway to Southwest China. What is very unusual about the Hutsul version is that most people stop when the design is finished, like this. This could be the design on a woman's collar in Voss in Norway. 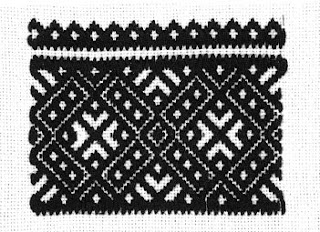 but continue by filling in the fields with various colors, like this. 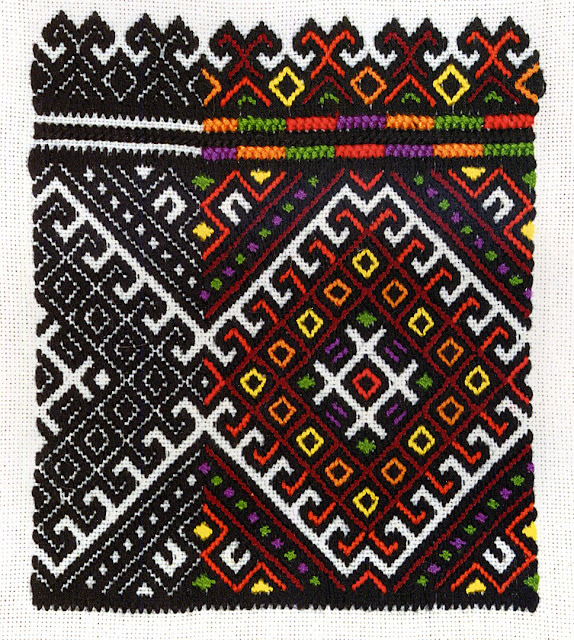 Both of these examples were executed by the artist Evdokia Sorokhaniuk. This one is done in a warm color scheme, which is often considered typical for Hutsul costume, but they are also done in a cool color scheme like this example from my private collection. 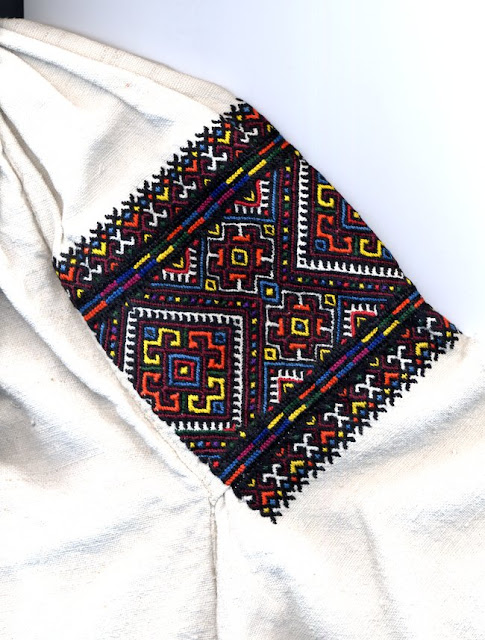 You can see the seam where the ustawka, or inset was sewn to the body of the chemise, and in the center, you can see the seam where the lower sleeve was sewn to both. In this case, the lower border was embroidered on the sleeve. The seam itself is covered with a wide black line in the embroidery. The neckband and wristbands are also embroidered, the lower hem, unusually for Ukrainian costume is typically not embroidered. I will further explore Hutsul embroidery in future postings.

If you take a quick peek at the photos above, you can see how the embroidery falls on the arm.
You will also see the distinctive feature of the Hutsul woman's costume, the double apron. These are two separate rectangular pieces of cloth, woven with fine stripes and bordered in a wool braid, that are tied on by strings attached to the upper corners. The back one is put on first, and then the front one. Then a colorful woven sash is wrapped around the waist. Here is a closeup of the weave of one of these aprons. The braid that edges the piece is visible at the bottom. The color of the aprons varies from village to village, from dark like this example to golden yellow/orange in the town of Kosmach, as in the example shown below. One of my readers pointed out that there are no actual orange threads used, but rather a combination of red and yellow, along with other colors, but the overall effect is a golden/orangy color. 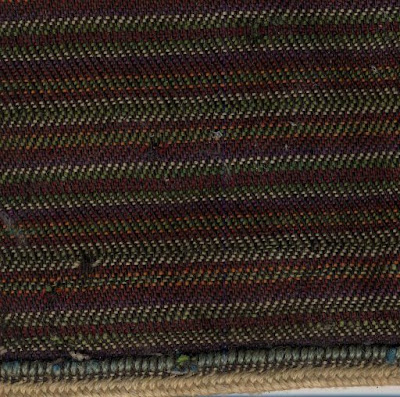 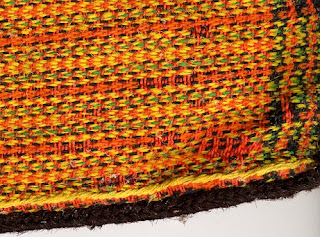 ﻿Here are a couple examples of Hutsul woven sashes, which are called kraika. 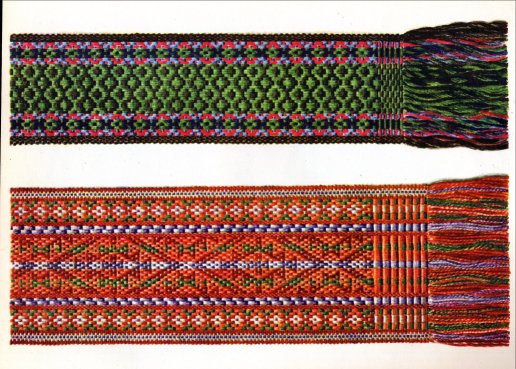 Here is a closeup of  footwear from a display in the Museum of The Folk Art of the Hutsul Region in the city of Kolomyja. 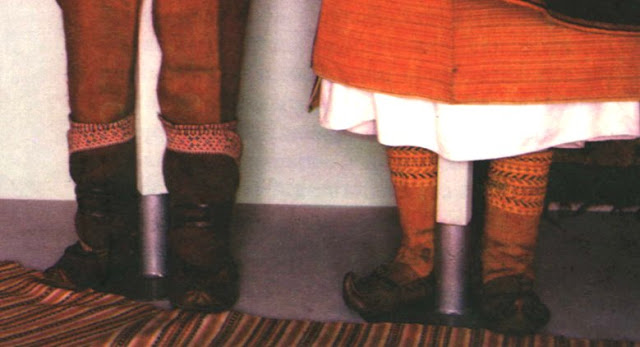 These footcloths are called kapchuri, they are cut and sewn from a very heavy and stiff woven wool cloth.
This same cloth is used for outerwear. Knitting is not a craft which forms part of Ukrainian tradition. Today you will find Hutsuls using knit socks, but this is a recent development. [As an aside, the famous artist Jan Brett illustrated a children's book depicting the Ukrainian Folk Tale 'The Mitten'. She made the mitten knitted, one of many inaccuracies in her drawings. I really wish she had done more research, Much of what she drew in that book is Scandinavian instead of Ukrainian. Just petting one of my peeves here.] There is a part sewn to fit the foot, and another piece sewn on to form the leg of the sock, the edge of which is embroidered. The top is wrapped around the lower leg, and held in place by straps attached to the footwear, a type of moccasin which are called Postoly. Here are some closeups of kapchuri and postoly. 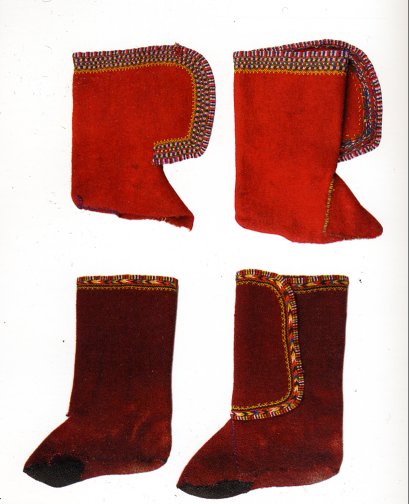 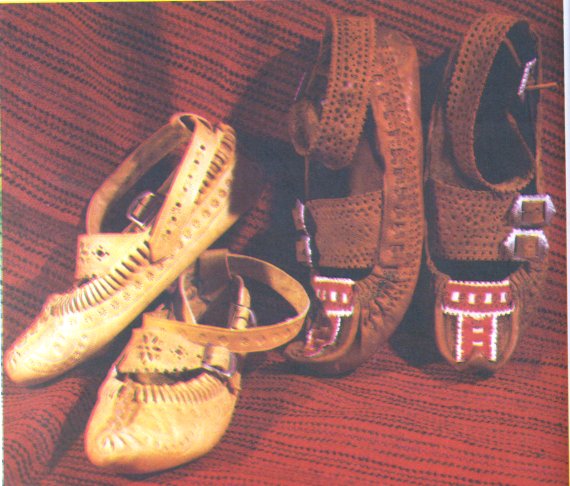 I think i will need to stop this posting here. I will continue in the next posting talking about the outer wear,
Kyptar and Serdak, and headgear.
Here is a photo of the man's costume from the town of Kosmach. Embroidered shirt, worn outside the pants, sash or wide leather belt, called the cheres, linen or woolen, according to season, pants tucked into the kapchuri, the embroidery down the side of the pants is most unusual and one of the distinct characteristics of this town. Postoly on the feet. a heavily decorated round black felt hat on the head, walking stick in the shape of a little axe, called the topirets. Sheepskin vest, called the Kyptar or Keptar.

Again, thank you for reading my blog.

I hope that i have impressed you with the beauty and creativity of ordinary people, and maybe inspired you to make something beautiful to use in your life.
Feel free to contact me with requests for research. I hope to eventually cover all of Europe and the Former Russian Empire/Soviet Union. I also gratefully accept tips on source materials which i may not have. I also accept commissions to research/design, sew, and/or embroider costumes or other items for groups or individuals.