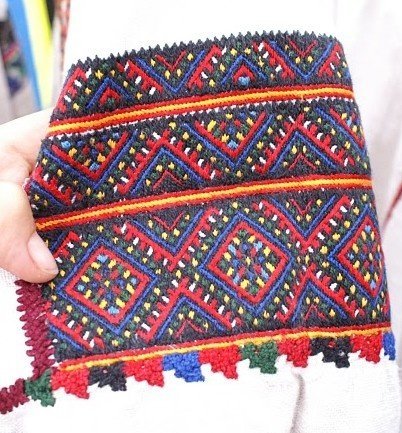 Hello all,
Horoden'ka is an extraordinary crossroads of embroidery styles, the influences of Podillia, Bukovyna and the Hutsul territories combine to form a rich local tapestry of embroidery styles. Today I will examine one local embroidery stitch which seems to be found nowhere else in Ukraine. Above you can see a photo of an ustawka, or shoulder inset embroidered in nyzynka, framed with herringbone stitch, attached at left to the body of the shirt with merezhyvo typical of Podillia, and then finished off on the bottom with a row of interlacing.
The local name for this design is 'merezhka khvostata'. Merezhka means net, and usually refers to hemstitching, although it can also refer to other types of hand work which resemble a net.
This type of interlacing embroidery is found nowhere else in Ukraine to my knowledge, but it IS found in Malta, Sind, and Armenia. The Armenians claim to have invented it, and there are historical data which show influences from Armenia to both Malta and Sind. It is well known that there were colonies of Armenians in Halychyna, to the point where they had their own Archbishop and Cathedral in L'viw. [The only city in the world ever to have had three concurrent Catholic Archbishops, Roman, that is to say Polish, Byzantine - Ukrainian, and Armenian]. So it seems clear that this technique was borrowed from the Armenians, although why here, and not elsewhere in Halychyna is not clear.
Armenians call this type of interlace embroidery Marash work, after its historical city of origin, or Heusvadz Gar.

In Horoden'ka, this type of embroidery is only used as an adjunct stitch on women's chemises, in a band just below the shoulder inset, taking the place of morshchynka in the second part of the sleeve design. Typically, there is no embroidery on the lower sleeve.The embroidery on the ustawka may be nyzynka, cross stitch, or in another  technique. 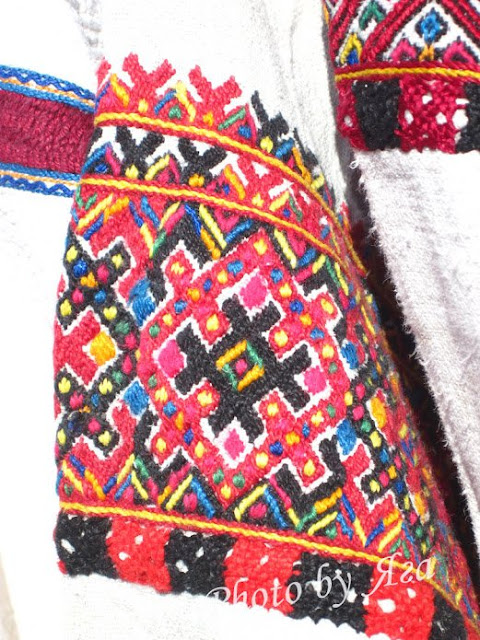 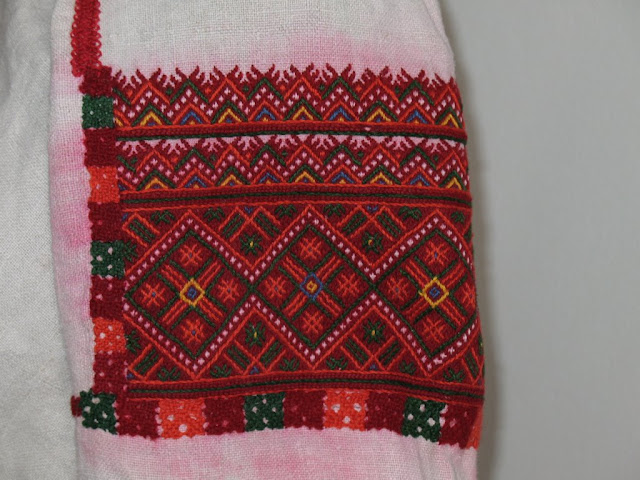 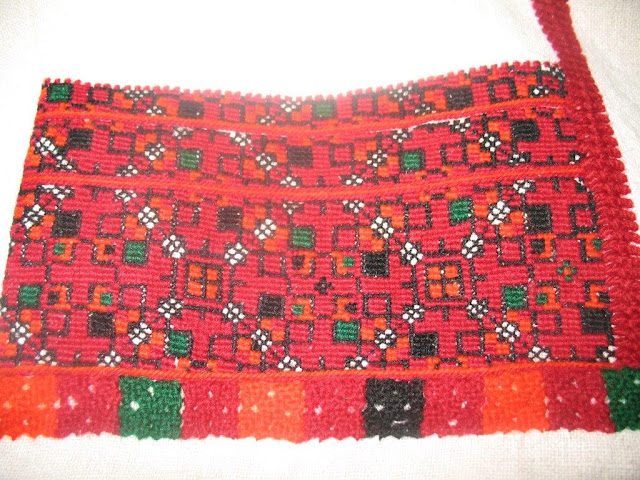 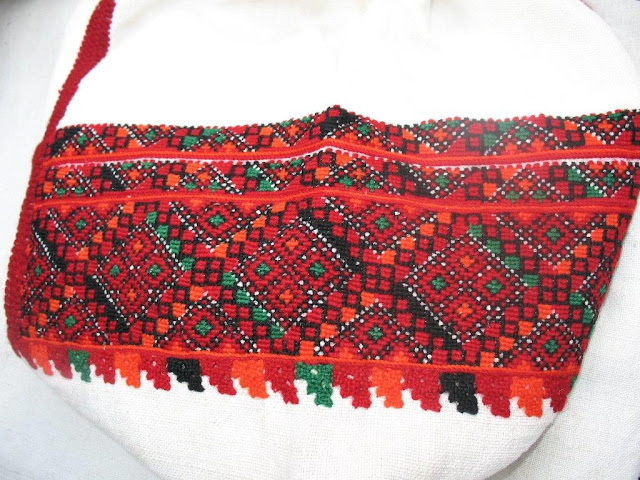 In fact, only three designs are used, all of which are variants of a single motif. 'Cross', which may 'be seen in the second and third images above, 'tailed', which is the cross with one arm missing, which can be seen at the top of the article and just above, and 'slanted', in which two opposite arms of the cross are missing, and the motifs are stacked so as to give a diagonal design, as in the following two photographs. In all of these, each succeeding motif is executed in a different color. 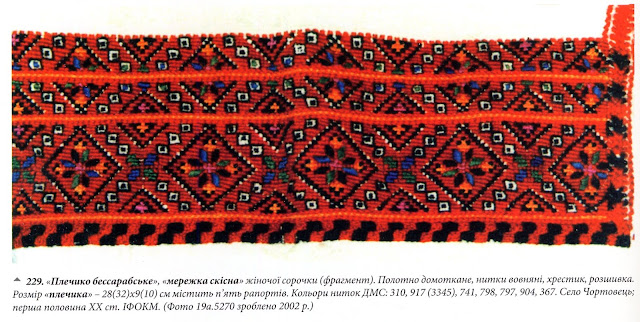 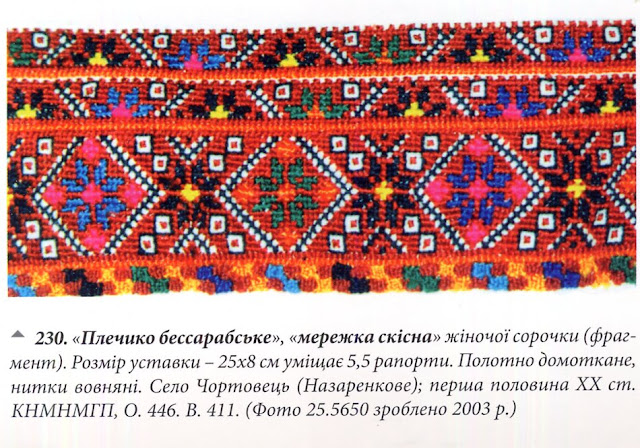 Here are the three designs side by side.

This paucity of design is another indication that this is a borrowed technique. However, they undoubtedly enrich the chemises of Horoden'ka, and are used in a unique way.
For comparison, here is a piece of Armenian embroidery completely executed in Interlace stitch. 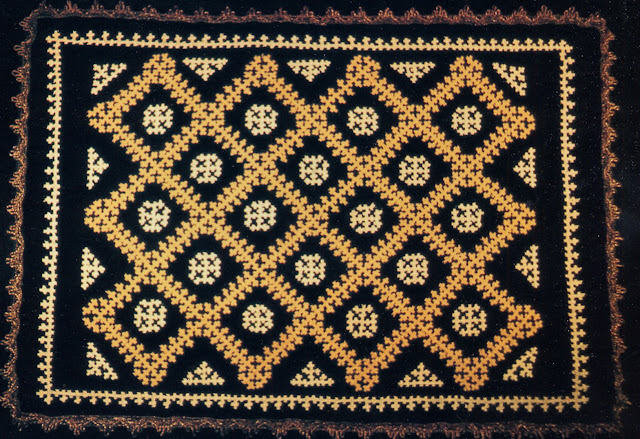 You can see that although the Ukrainians may have borrowed the technique, they reinterpreted and adapted it to their own tastes rather than just copying the Armenian embroidery.

This type of work is executed in two parts, first a lattice is laid down, and then the embroidery thread is twined around the lattice without ever piercing the ground fabric except at beginning and end. You can see the lattices laid out for the three motifs above. Here is a schematic of a completed cross.The cross is always executed in one color. Here the two parts have been colored differently so as to make it easier to understand the technique. 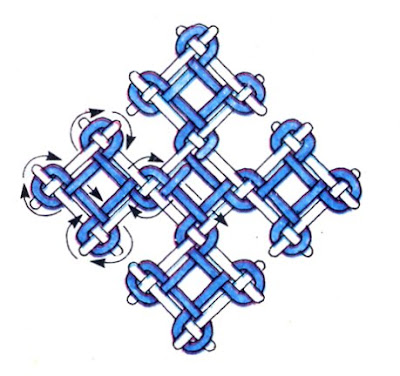 The Armenians and Maltese use the cross like this, in Horoden'ka, the cross is worked on the diagonal, as seen above. When  laying down the lattice, it is very important that the lattice threads cross above and below one another alternately. Here is a closeup of the lattice. 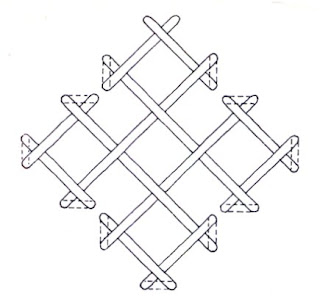 Here is a step by step diagram of how to embroider the cross. The Armenians mark the cross on the material first. Ukrainians do not do this, instead laying the lattice in a counted thread technique. I present the diagram on the diagonal, as done by Ukrainians. 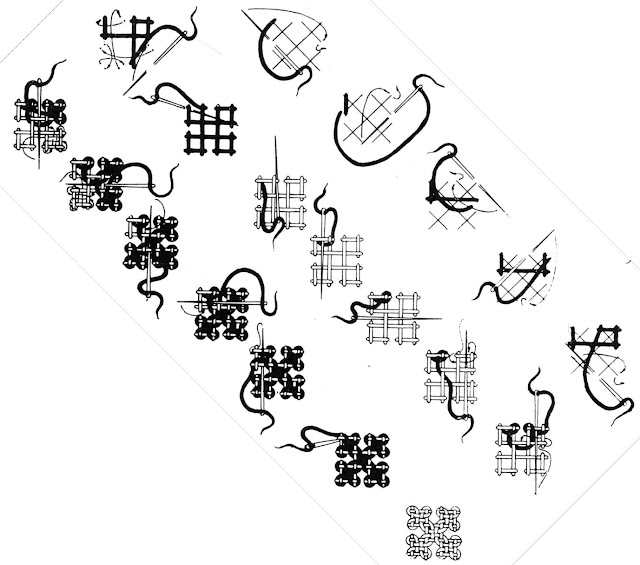 This can be easily adapted to the other two designs.
It is this type of added detail which adds richness of texture to the traditional embroideries of Ukraine. Modern adaptations which turn everything into cross stitch loses a dimension, becoming flat.

I hope that you have found this interesting and inspiring. Obviously this technique can be used to decorate many things.
I will close with a couple more images of this embroidery. 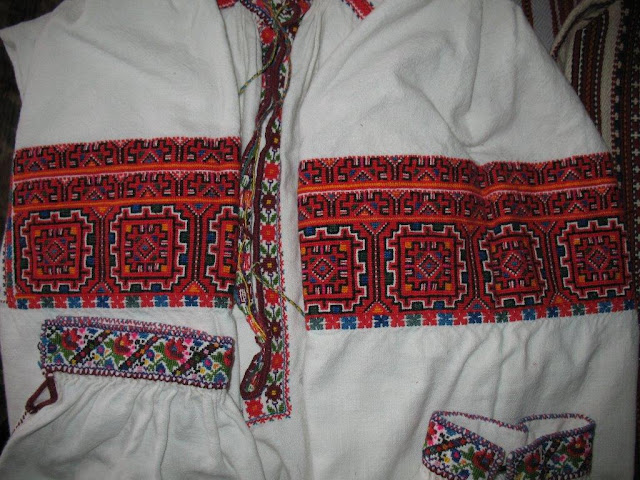 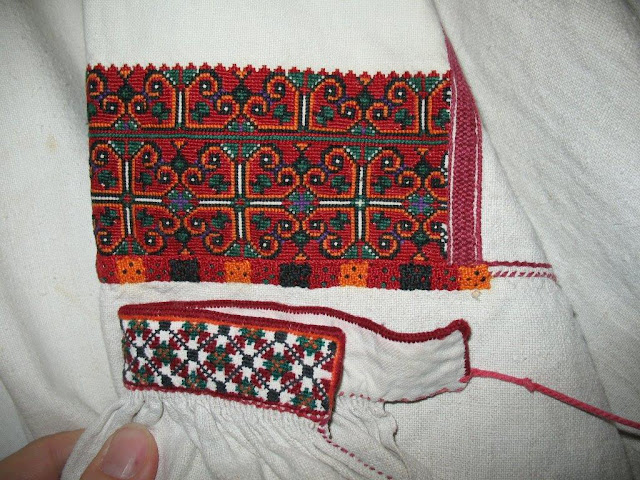 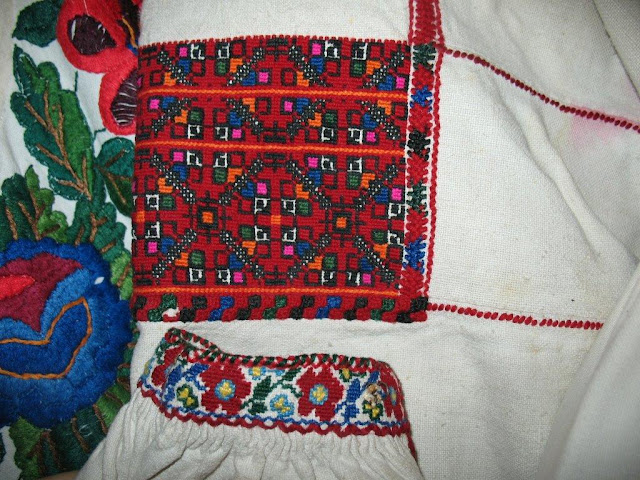 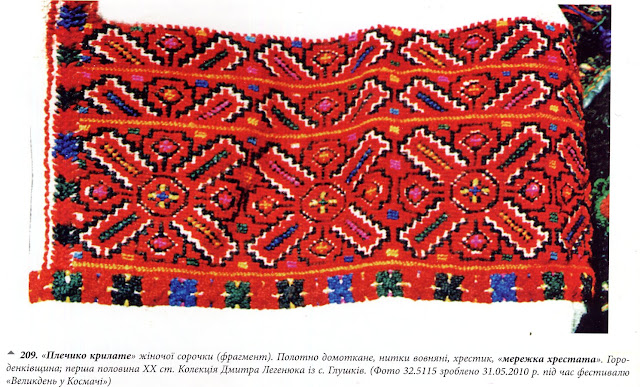 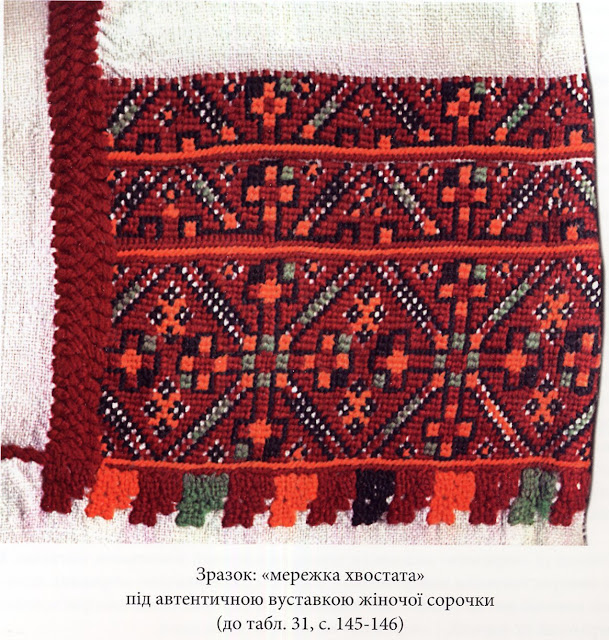 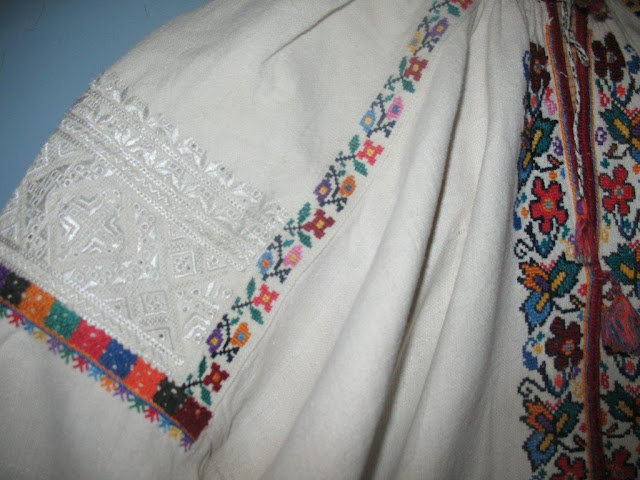 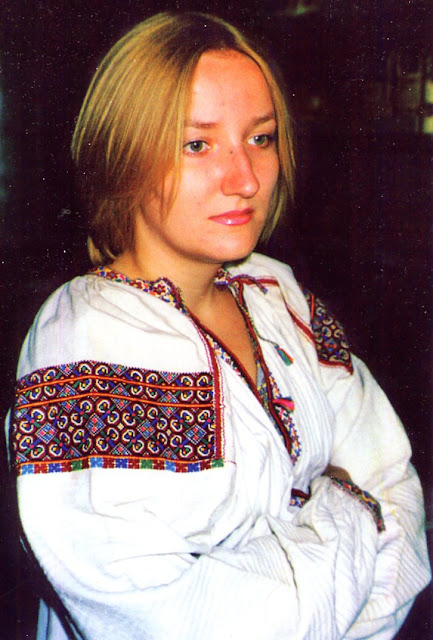 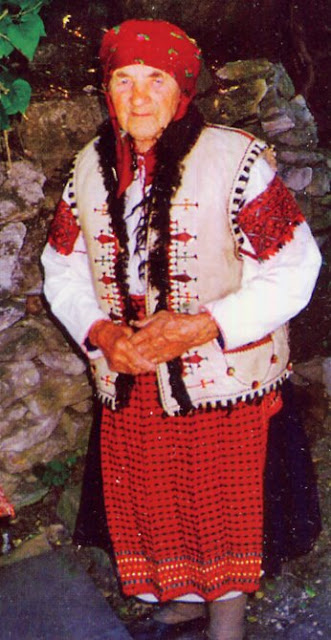 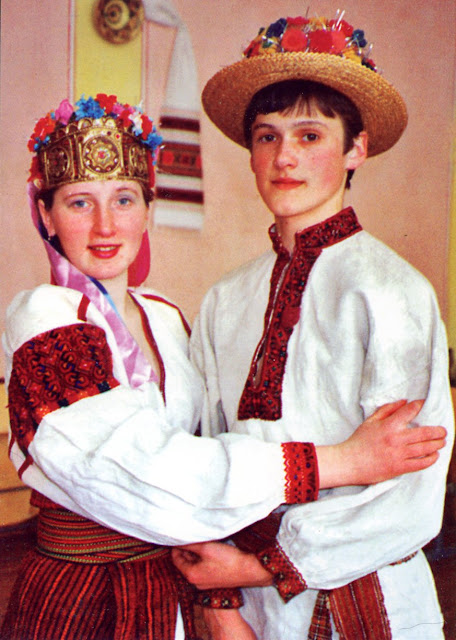 I am indebted to Vasyl Jula for many of the large closeup images used in this article.

Many of the rest of the images are from the work of Iryna Svyontek, which I highly recommend.