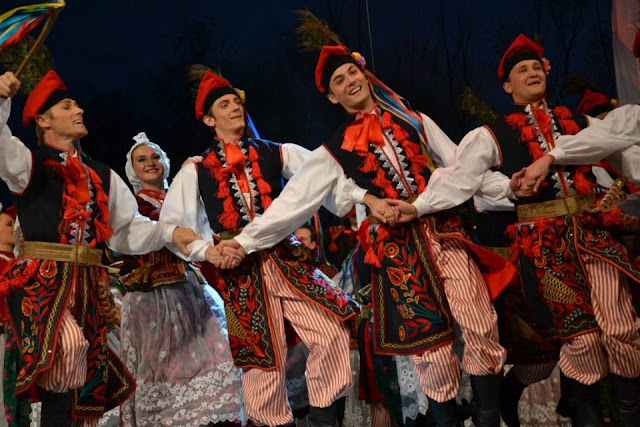 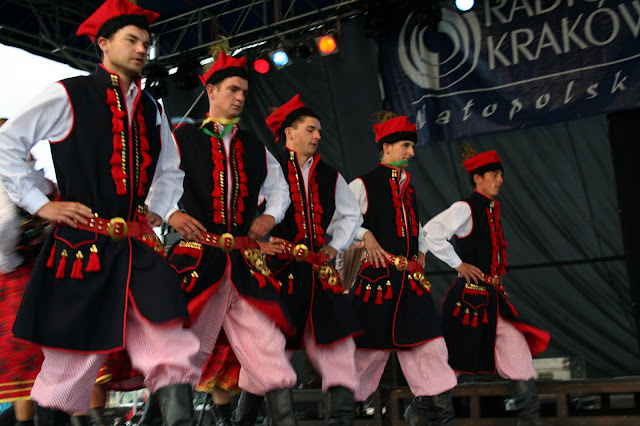 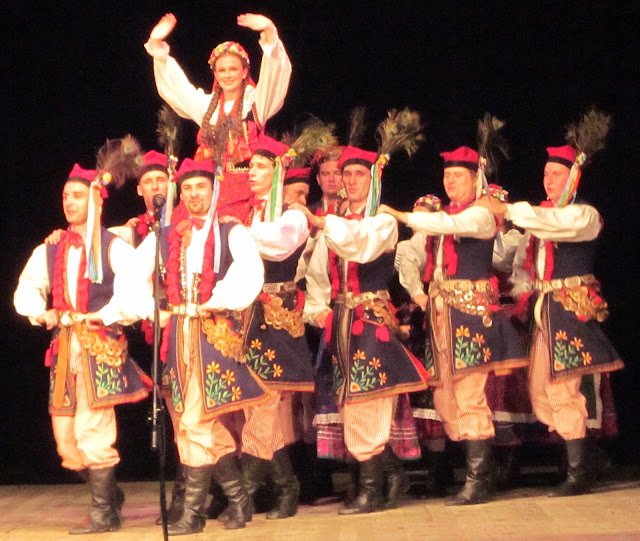 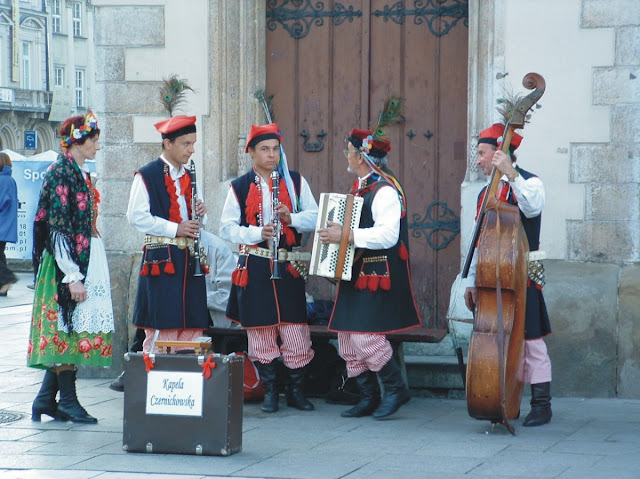 Here you can see the mens Krakowiak costume as it appears on stage and in parades today. This one variant has taken over. The only significant difference is in the embroidery on the front corners of the kaftan. In actuality there was much more variety of clothing worn by the men in the Krakow district.

This version is based on the one which was taken as a military dress uniform for the Polish army for a time. There has always been a strong influence of military uniforms on mens costuming.

The shirt is of linen with full sleeves, as is usual in European traditional costume. The neck is fastened with a red ribbon. The shirt is usually plain, but here is an exceptional example from the village of Rudawa which is embroidered. The construction is typical. 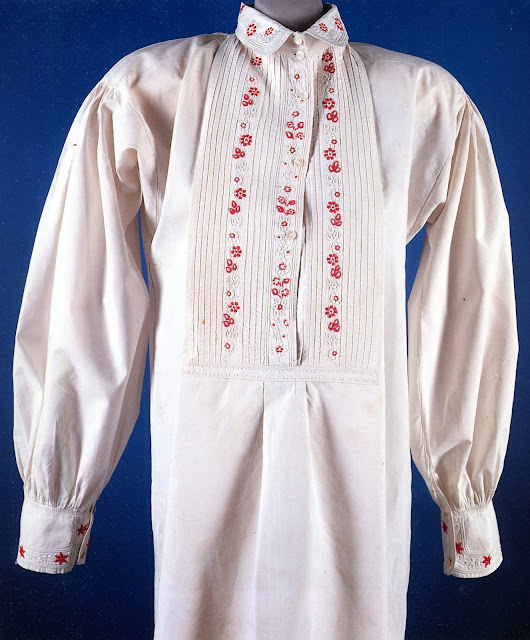 A long vest called kaftan is worn with this costume. It most commonly comes almost to the knee although shorter examples are known. They are blue or sometimes black. They have tails in the back for riding, and are usually decorated with buttons, tassels, and sometimes embroidery on the front corners. The pocket flaps are also decorated. 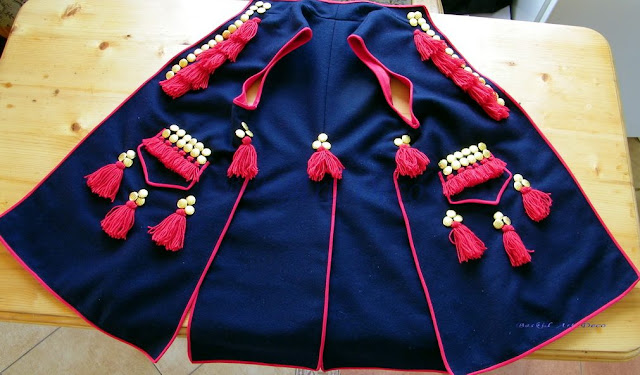 The kaftan is often belted. Of the various belts used, three are most typical;
the wide belt known as Trzos, decorated with studs, embroidery and tassels. 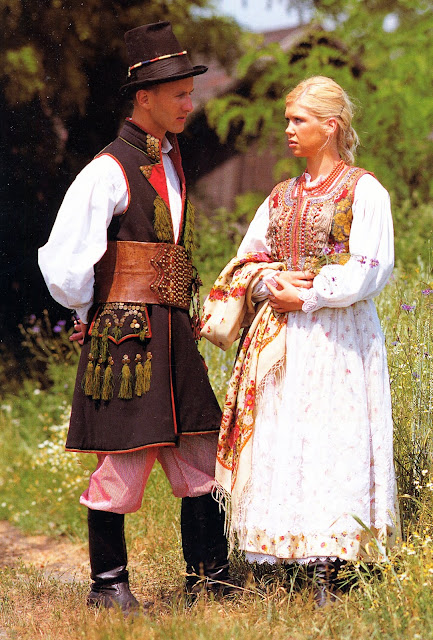 A narrow belt with small cymbals attached. This is the kind usually seen in performances. 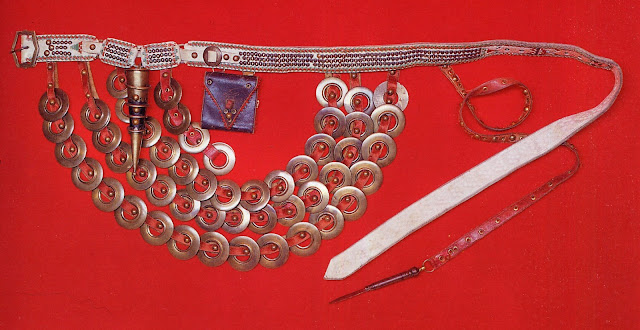 A narrow belt with metal plates called smyczka. This is wrapped two or three times around the waist, similar belts are worn by Slovaks.

As in many other places, things like pouches, flint and steel, knives and hoofpicks were often hung from the belt and sometimes attached to it.

A long wool overcoat called Sukman is sometimes considered to be the most symbolic of this region. There are many local variations in detail of ornament, but in general they are of white wool with a standing collar in West Krakow costume, and of brown wool with an embroidered cape-collar in some East Krakow costumes. These are often worn over or instead of the kaftan. 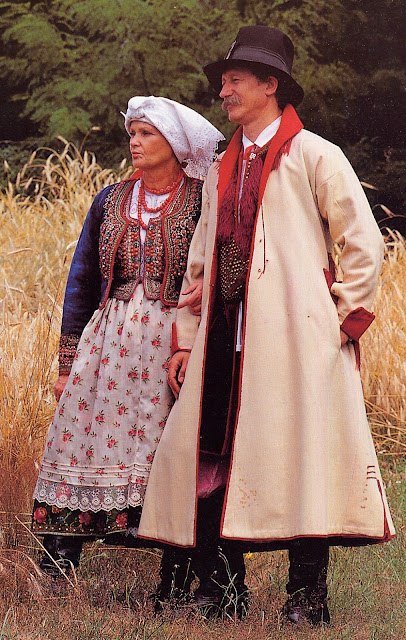 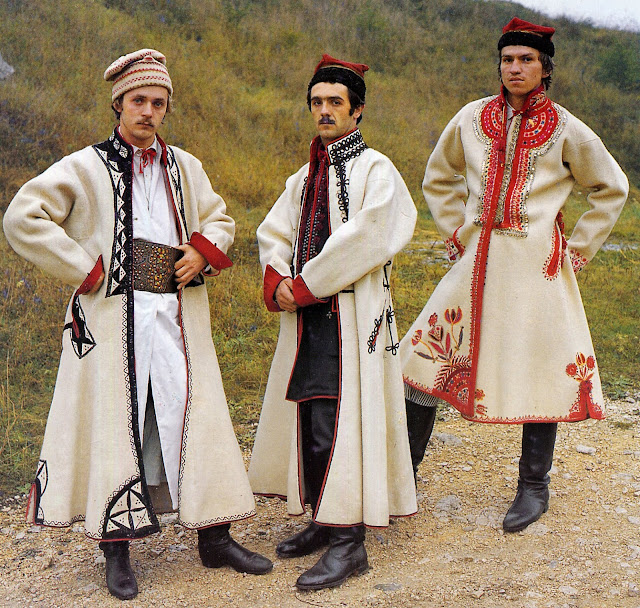 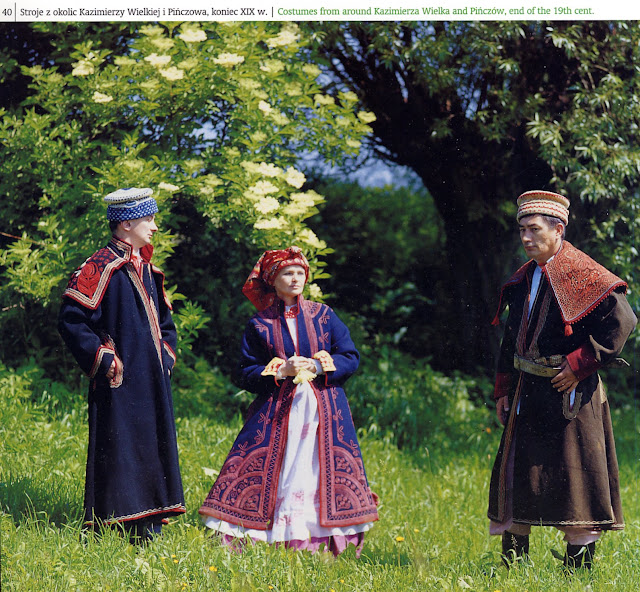 The embroidery on these collars varies quite a bit by district. 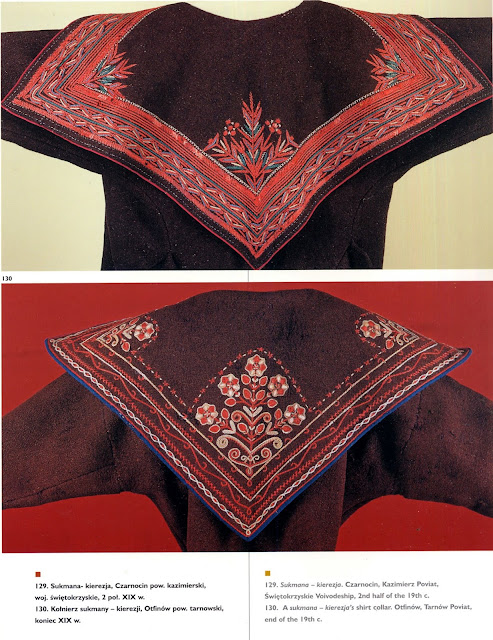 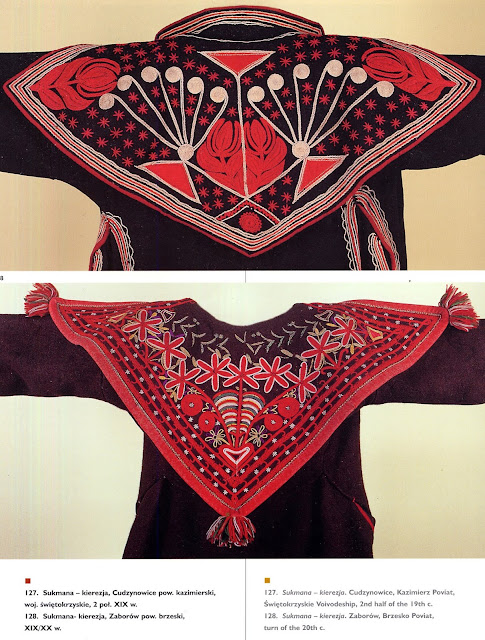 Three kinds of hats are most commonly associated with this costume, all of which may be seen in the above photos.

1. The Rogatywka, the four-cornered hat which is sometimes seen as the very emblem of Poland. This is usually decorated with peacock feathers, and sometimes ribbons and flowers for weddings and other very special occasions. 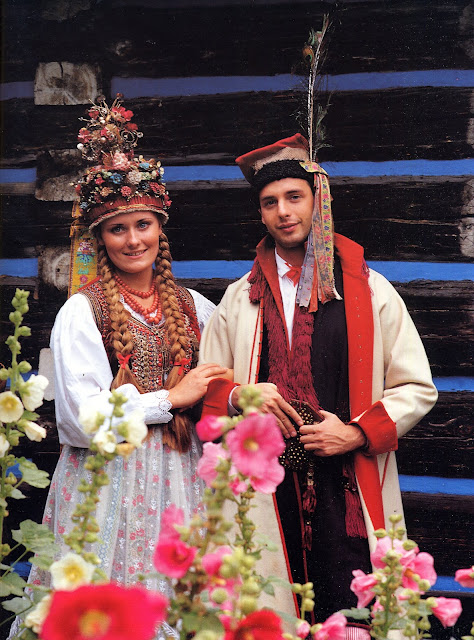 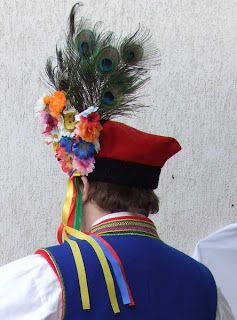 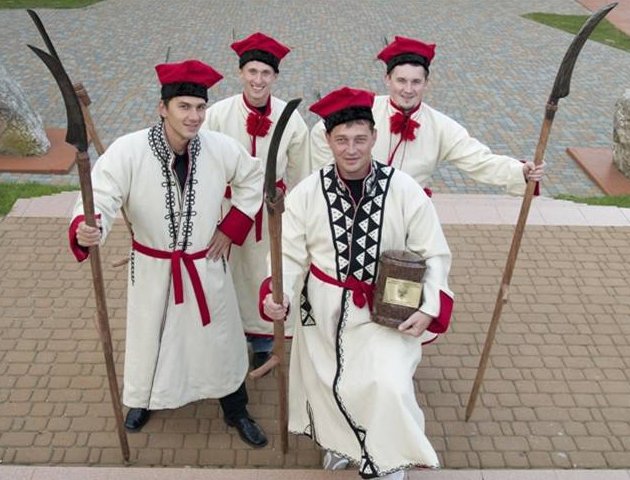 2. The Magierka, a round knitted cap which is usually tan colored with small designs knitted in. This is very popular with farmers especially. 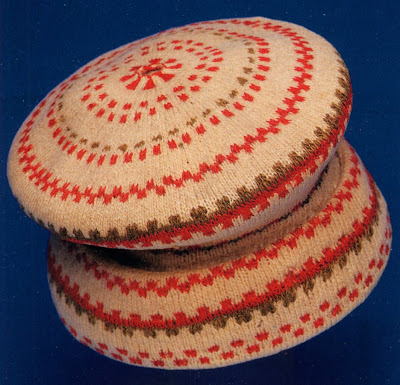 3. A dressy, slightly conical top hat called Celender [cylinder]. This was later replaced by a modern felt hat, which is unfortunate. 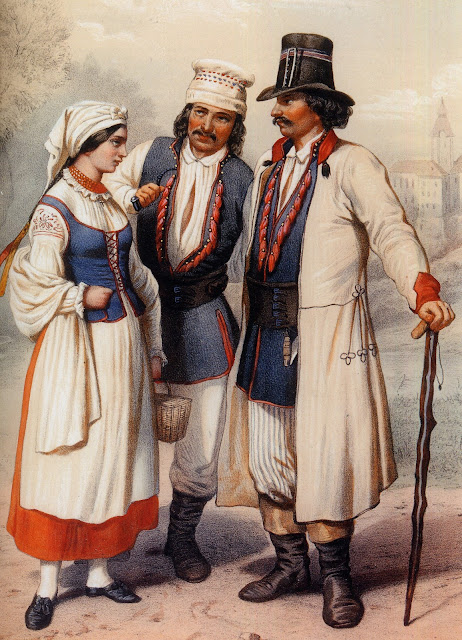 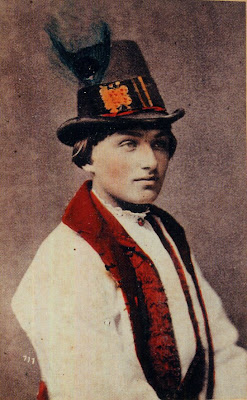 There are other, lesser-known garments and variants. Sometimes the kaftan has sleeves, in which case it is often called a żupan. Here is an example from the village of Mników, it also is ornamented with red braid and mother of pearl buttons to match the woman's gorset. This ornamentation is also found in the sleeveless version. 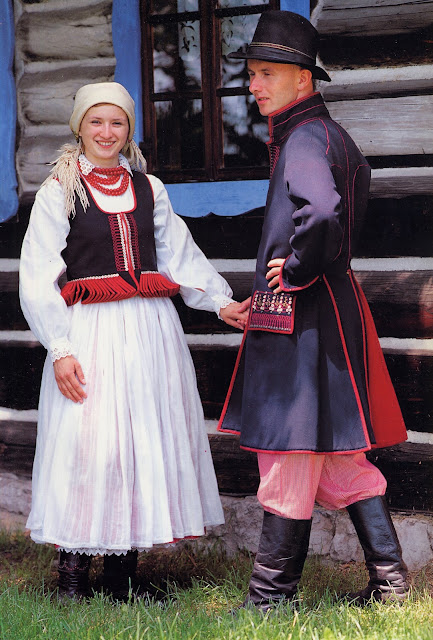 Here is a couple from Bronowice wearing a similar costume.

There is a short jacket which overlaps and buttons in front called Kabat. This is decorated with topstitching and may be worn alone or under the kaftan or Sukman. This garment became very popular in Western Poland, the red variant in Wielkopolska and the blue in Silesia. Both were  also worn in the Krakow area. 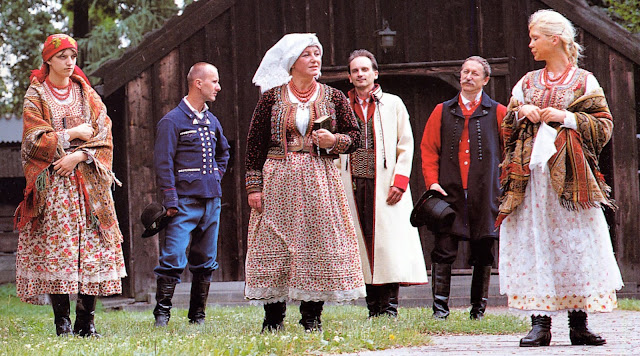 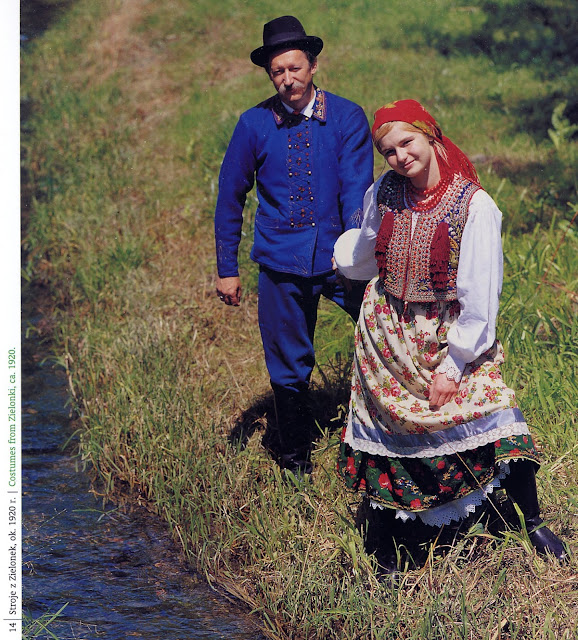 There is a long linen coat which resembles the sukman, but is minimally decorated. This garment is also found in Ukraine and other countries, but in Poland is called płótnianka. This is worn in warmer weather, which of course, also calls for a straw hat.


In winter in the Krakow region, as in most Slavic nations, they wear sheepskin hats and overcoats of wool or sheepskin.

Thank you for reading, I hope that you have found this to be interesting and informative

This website offers vintage costumes from Poland and other places for sale.
http://www.easterneuropeanart.com/polish.htm

Here is a Polish website which specializes in Krakow costume. These are contemporary pieces.
http://www.perfekt.krakow.pl/stroje

A video of the Polish college group Slowianki doing the Krakowiak.
https://www.youtube.com/watch?v=VXbtEdgvNFU