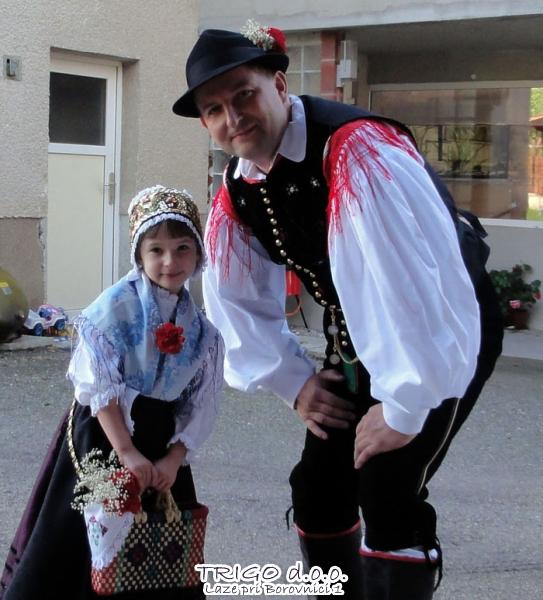 Hello all,
Today I will continue speaking about the costume of Gorenjsko, talking somewhat about the men's outfit.

This is at least as much in the Alpine Tradition as the woman's. It is only very slightly different from that worn in parts of Austria.

The base is a linen shirt with full sleeves, as is true for almost all folk costumes.
The cut is very similar to that of the woman's costume, with a shoulder inset on the sides of the body. 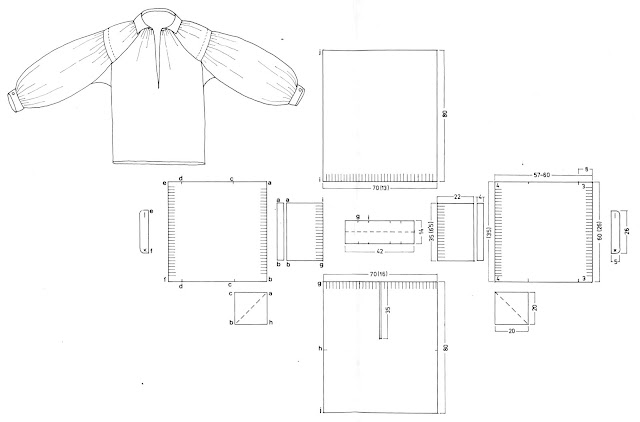 Long linen under-trousers are worn with these, reminiscent of those worn in Spain and similar to those of Croatia. 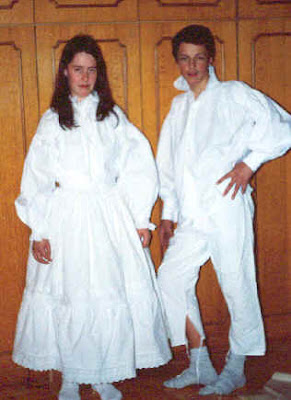 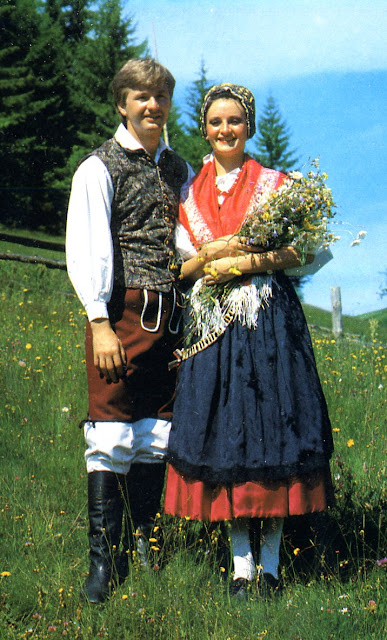 Over the long linen pants are worn leather knickers, these are knee-length, and are ornamented with green stitching, much like those which are found in Austria. Cloth trousers are worn as well, but leather are preferred. These in the image above are rather short, and are not leather. You will occasionally see men wearing short Bavarian-length lederhosen, but these are not correct. Traditionally they are made of leather from the Red Deer, but in practice, they are made of many types of leather. 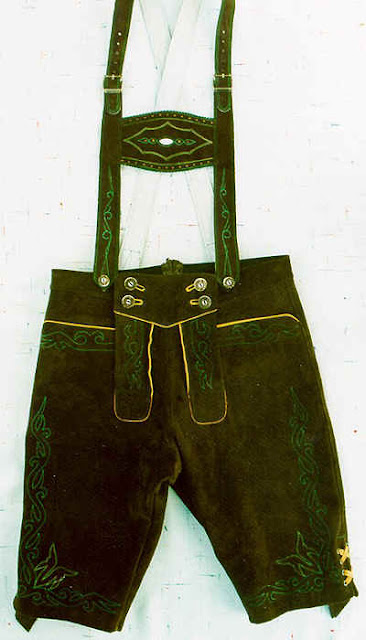 I see images on Slovenian websites of suspenders attached to these knickers, but I wonder if they are in fact worn because they are never visible in images of men who are dressed. I suspect that they are simply bought that way from Austria. This garment is very practical in the mountains. 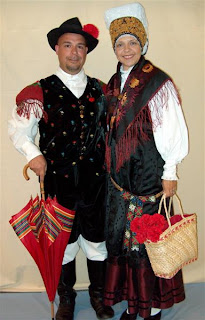 The men wear a silk shawl over their shoulders which are highly ornamented, and very similar to those worn by the women, although often smaller. 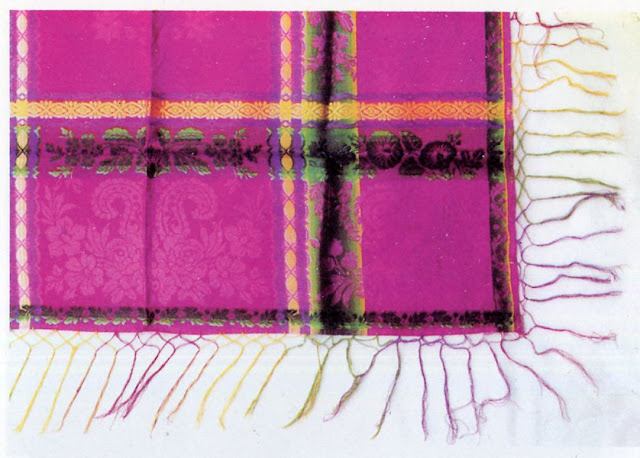 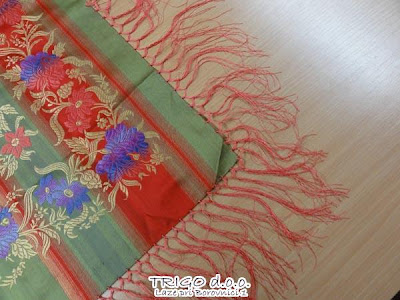 Over the shawl they wear a vest. The cut varies slightly, but in general it is made of either a solid color or a material with a small ornament repeated across its surface. It is closed by many silver buttons which crowd the front opening.

Usually the bottom is cut straight across, but occasionally you see the two points which are typical of western vests. 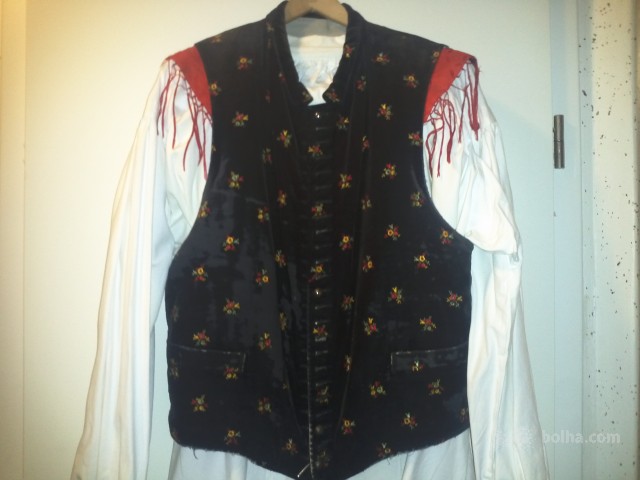 A few more examples. The vest is the main object of ornament which distinguishes one man from another. Since the shawl is only visible on the upper sleeves under the vest, sometimes they cheat and simply sew a corner or piece of shawl to the vest. 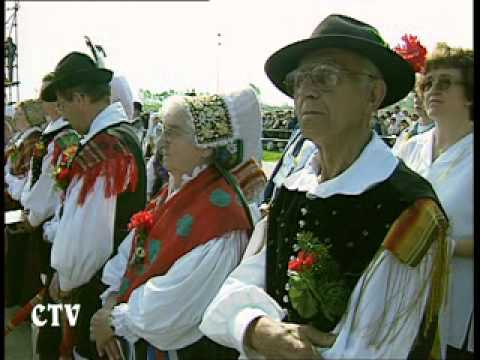 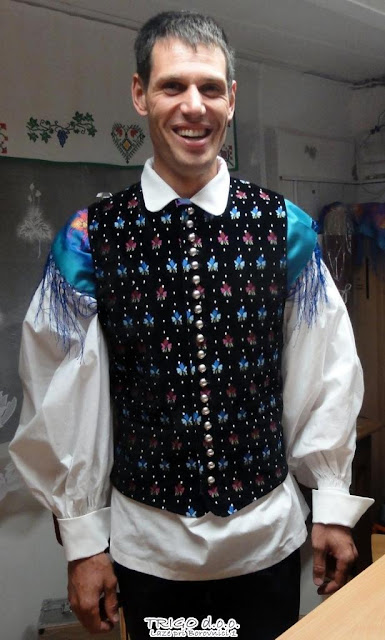 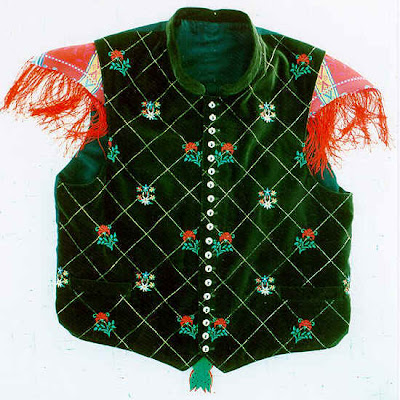 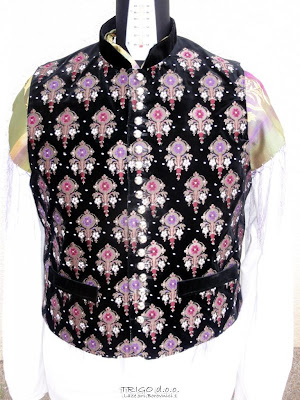 Very similar vests are worn by the Bunjevci of Vojvodina.

Boots are worn with this costume. They almost always leave the linen undertrousers visible between the boot top and the leather knickers. The boots may be ordinary, or they may have a cuff at the top, which may be ornamented, or occasionally they may be very tall, extending above the knee. 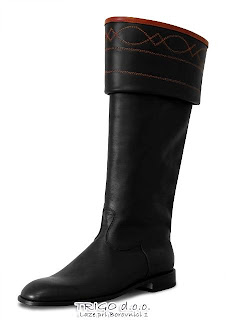 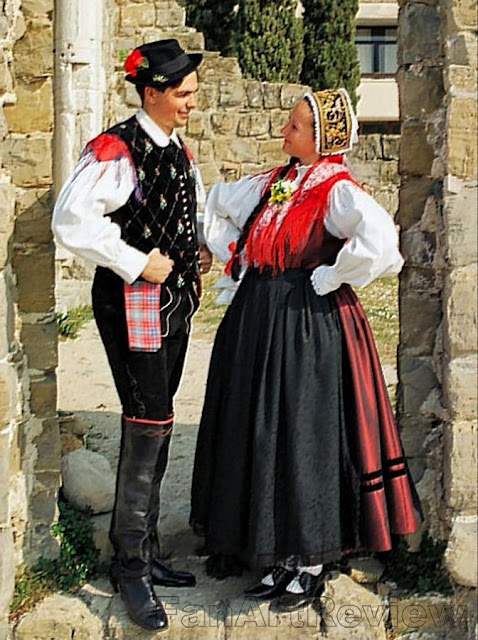 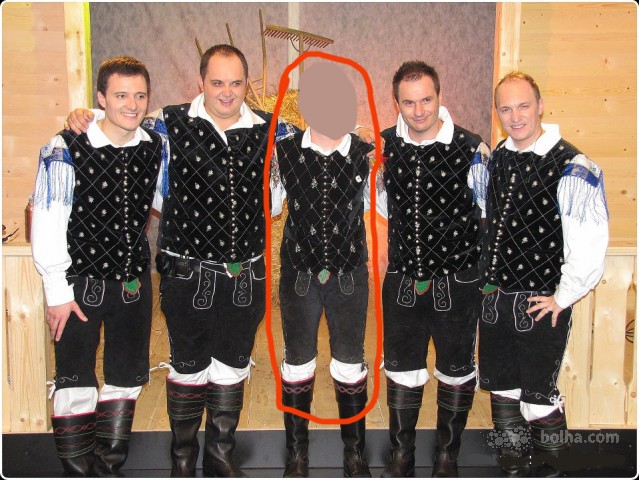 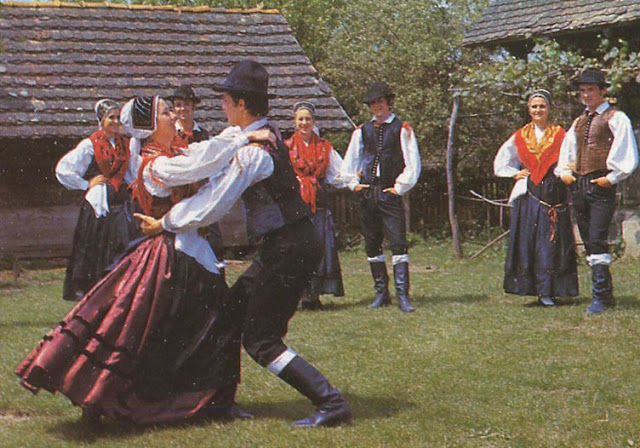 An Alpine style felt hat and pocket-watch on a chain and fob complete the costume.
Oh, and the red umbrella, can't forget that. 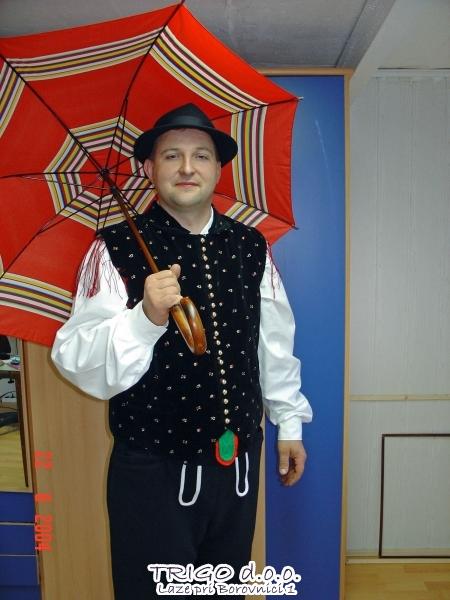 Just a couple more images of this costume.
Thank you for reading, I hope that you have found this interesting. 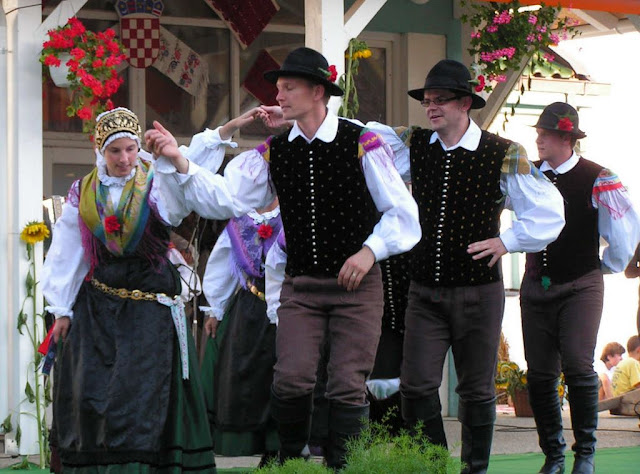 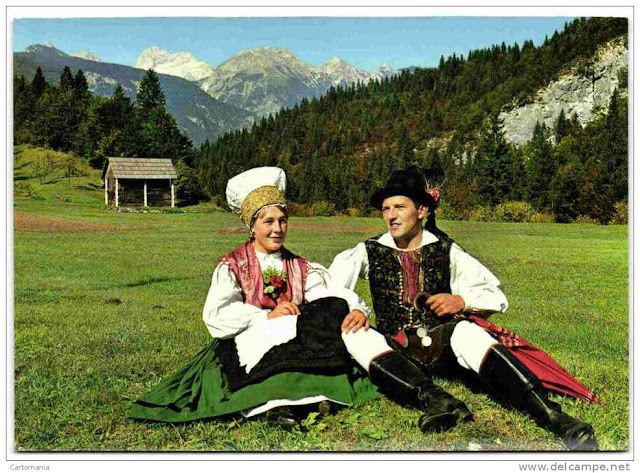 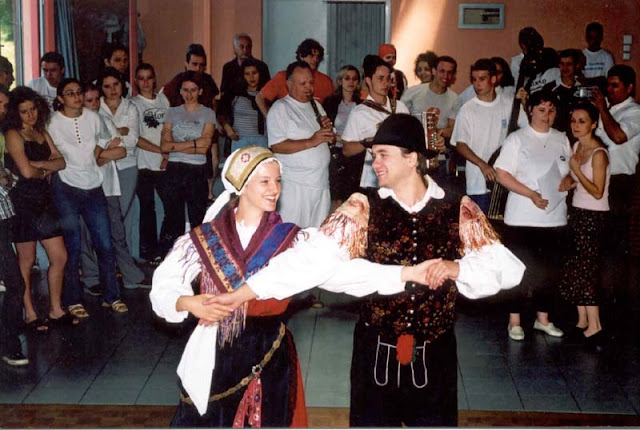 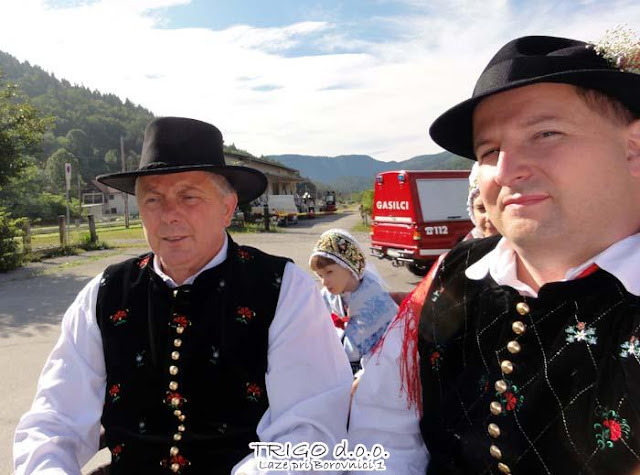 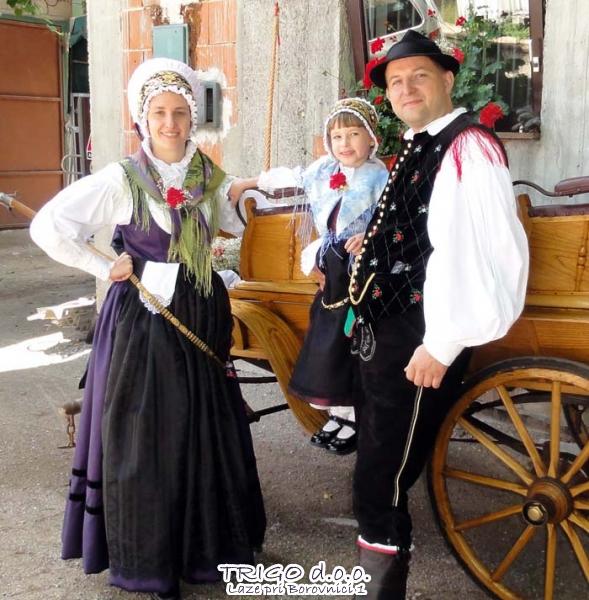 Another site with much good information
bojan.knific@guest.arnes.si

A slide show from a children's group in Toronto
https://www.youtube.com/watch?v=v5Lgn_OWr8Q&feature=endscreen

A dance concert in Ljubljana, showing dances from this region. Both the music and the dances are typically Alpine. This group is wearing costumes from the area of Rateče, which is distinct in some details.
https://www.youtube.com/watch?v=EraeEqKuYU4

Here is a website, in Slovenian, that has many images of individual costume pieces. These mostly seem to be of recent make, and are sometimes simplified.I believe that you can order costumes and costume pieces made at this website.
www.trigo.si


There are many facebook pages devoted to Folk Costume these days.
They are becoming a valuable resource.
https://www.facebook.com/pages/Slovenska-ljudska-no%C5%A1a-Slovenian-folklore-costumes/130416587165737