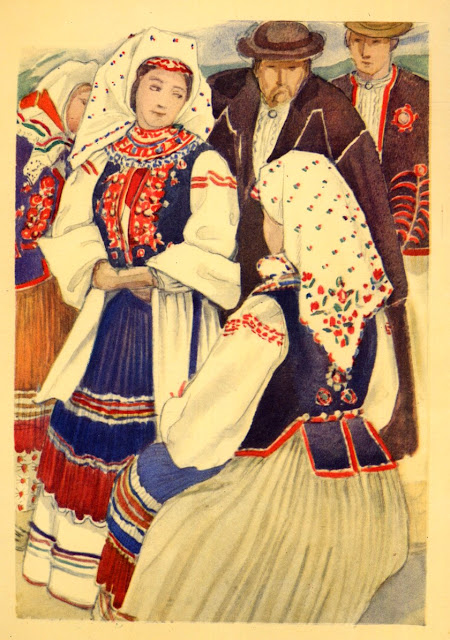 Today I need to make myself clear. I am NOT  going to talk about the Native American nation known as the Comanche, but a Lemko village and region which is currently within the borders of the Polish State. In Polish it is spelled  Komańcza, in Ukrainian and in Lemko it is written
Команча or Команчe.
Ethnic identity of the Lemki is somewhat controverted. Ukrainians consider them to be a branch of the Ukrainian Nation with very distinct dialects and customs. The Polish have at various times tried to alternatively suppress, cleanse, or assimilate them. Some insist on calling them Carpatho-Russians. Some claim that they form a micro-nationality who call themselves Rusyny, usually translated into English as Ruthenian. You will find individual Lemki who identify with each of these camps. 'Lemko' is a tern coined by their neighbors, referring to a word used in the Lemko dialect 'lem', which Ukrainians and Poles do not use. Some Lemki have accepted this term. This term is not used by the Rusnaks who live south of the Carpathians or by the neighboring Slovaks.
In any case, they form a distinctive group of people with a distinctive group of dialects, whether they are considered to be a branch of the Ukrainians or a closely related brother nation.

The painting at the top of the article was made by O. Kul'chytska, an artist who went around in the 1930's painting the traditional clothing of villagers in many parts of West Ukraine. Her work has been invaluable for those of us who came after.

I have rewritten and expanded this article, Please look at the new one here

Here is an interview with an old lady from Komancha, telling how things used to be. She is wearing a modern Ukrainian blouse, but has Lemko embroidery and costume pieces around and shows them off towards the end
http://www.youtube.com/watch?v=XXcny2TvtZg


Here is a link to a website showing various Lemko costumes made by Vasyl' Jula
He has asked me to point out that these were made for the stage and real costumes would be somewhat more subdued.
http://www.lemko.org/art/jula/