Some Chinese or East Asian Medallions 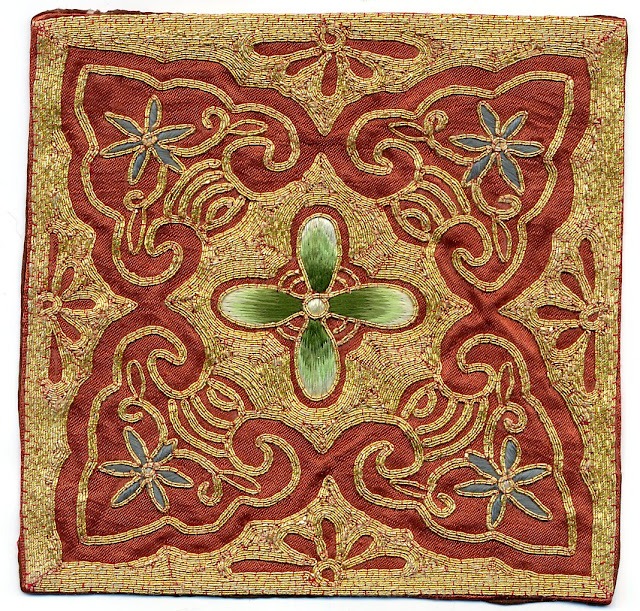 I apologize that I have not been posting as regularly lately. I am currently researching the Costumes of Savoy, and it is more work than I had anticipated.
For Easter, I thought I would share these examples of Asian Embroidery. I found these medallions in  a thrift store. I do not know where they are from.
This style of embroidery originated in China, and spread to Korea, Japan, Vietnam and other places, which of which elaborated on the style in their own way.
I also have no idea what these are intended to be used for. If anyone out there knows, please inform me. I don't know what I will do with them.
The majority of each of these designs is couching with a narrow metallic gold thread, done in runs of two. Each thread is half a millimeter wide.
The majority of each motif consists of negative  space, of which the Chinese are masters. Then other  motifs are embroidered in non-twisted silk thread.
The medallion above is 5 inches wide. Here are a couple more examples.This one seems to have pineapples. 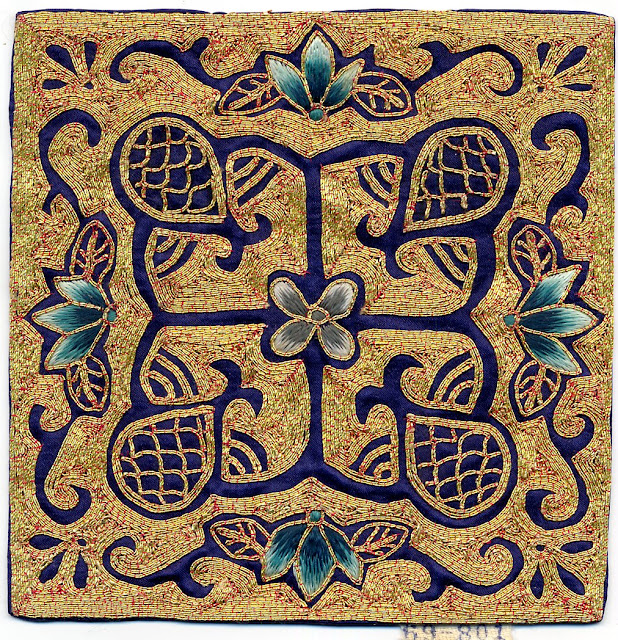 There are various background colors. 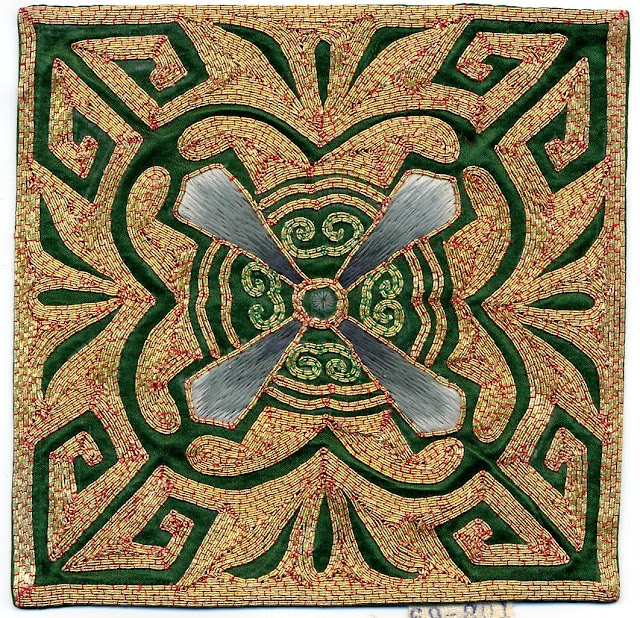 Some are square, others are round. This one incorporates butterflies? These are the same size, 5 inches. 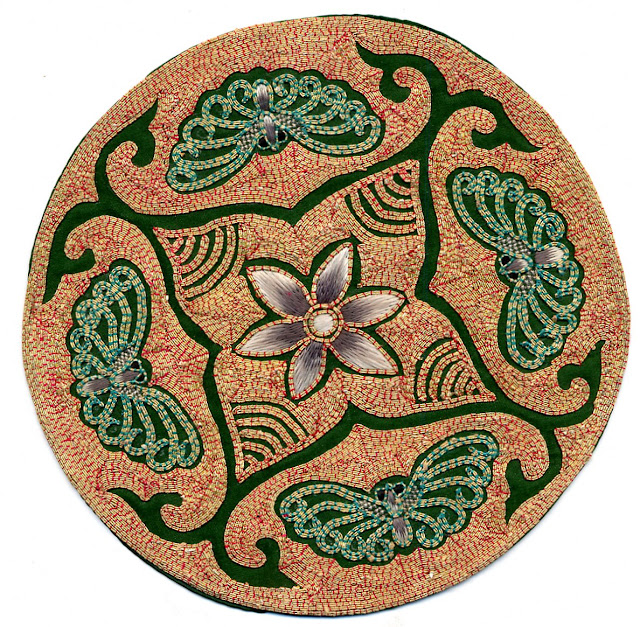 This one incorporates bats, a symbol of Happiness, as in Chinese, bats and happiness are both pronounced 'Fu'. 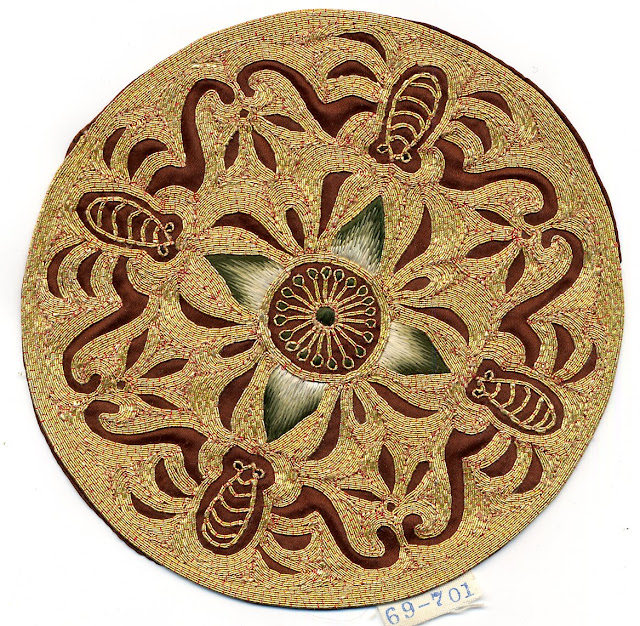 This example has squared off designs, reminiscent of the designs on ancient Chinese bronze vessels. 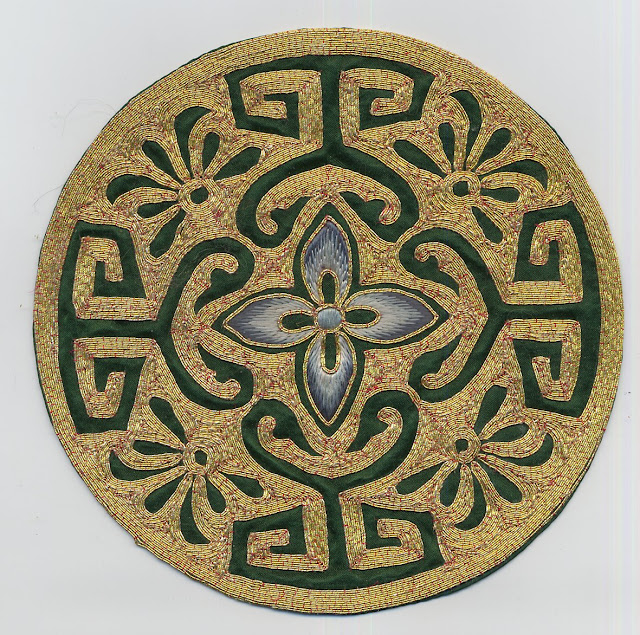 These next few are somewhat larger, 6.5 inches wide, so the designs are correspondingly more complex.  This one incorporates a Chinese character, I do not know which one. 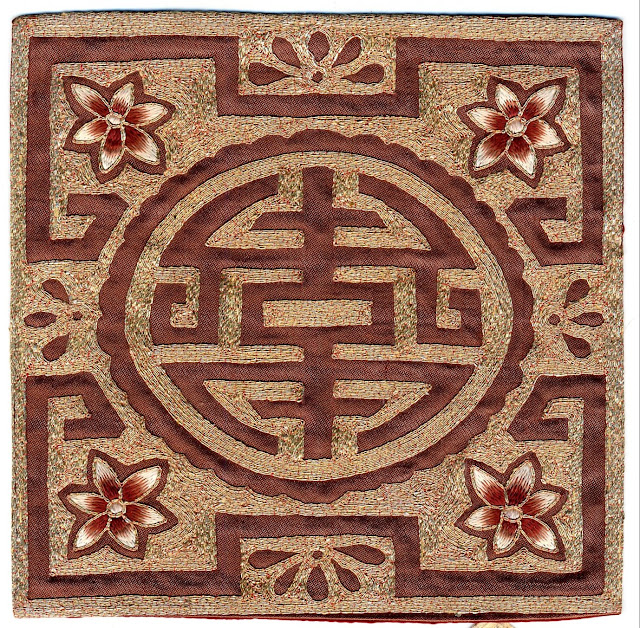 Each one is different. 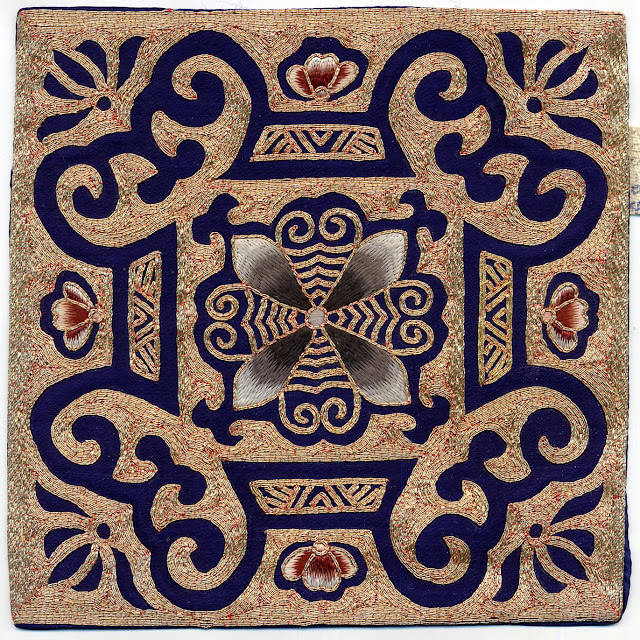 This design is  one of my favorites. Again, reminiscent of ancient bronze vessels, there are three animal faces at the top. Each eye can be seen as being on the head of a phoenix, two of them, facing each other. The Phoenix is a symbol of femininity, Yin. Alternately, both eyes can be seen to belong to the face of a Tiger, the nose being near the center of the design. The tiger is a symbol of masculinity, Yang. Oddly enough, the tiger is also a symbol of the ancient Chinese Mother Goddess, Queen Mother Wang of the West. Controller of disease, a ruthless and powerful figure.
[ Kuan Yin, who is sometimes called a Chinese Mother Goddess, is not Chinese, but from India, not a Goddess, but a Boddhisvata, the Buddhist version of a Saint, and not a woman, but a man, whose original name is Avalokitesvara, the Lord of Compassion. It is a surprising development that he became very popular in China as a figure of loving care and compassion, and became feminized. But if you look carefully at Chinese depictions of Kuan Yin, you will see no hint of breasts.]
So is this a depiction of the balance between Yin and Yang, or is it a depiction of the power of the female? 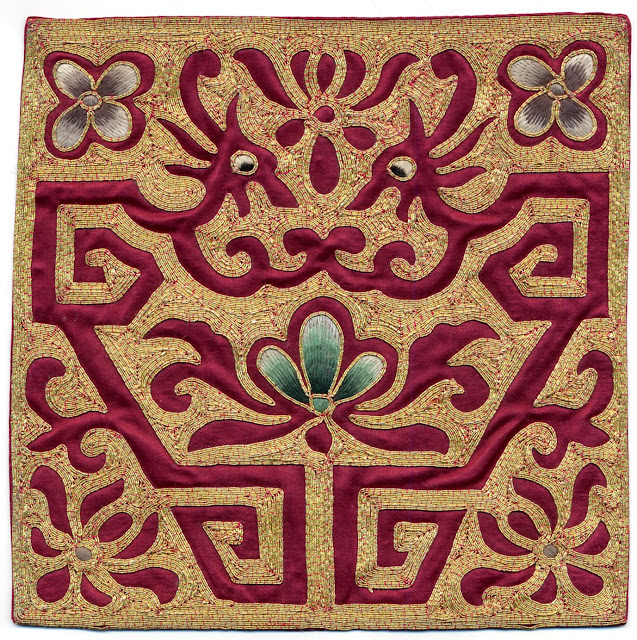 These next couple of medallions are 8 inches across, and  have more detail. Here is a bulbul? singing on a branch of a flowering cherry tree. 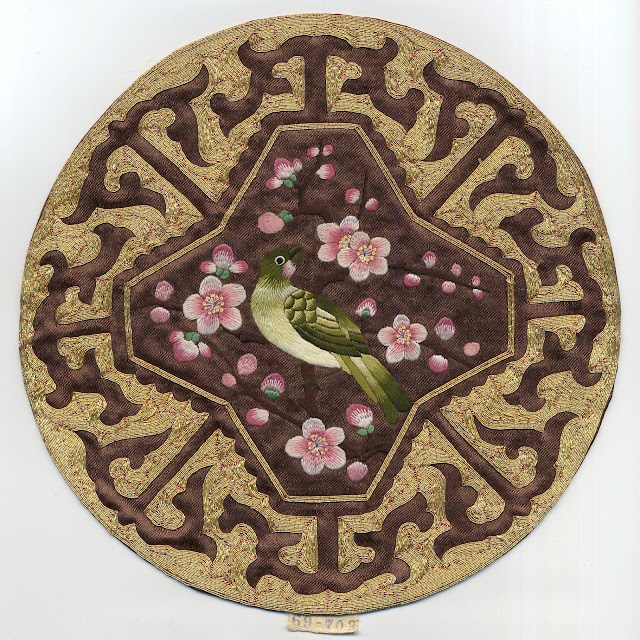 Here is a beautiful goldfish swimming in a pond. 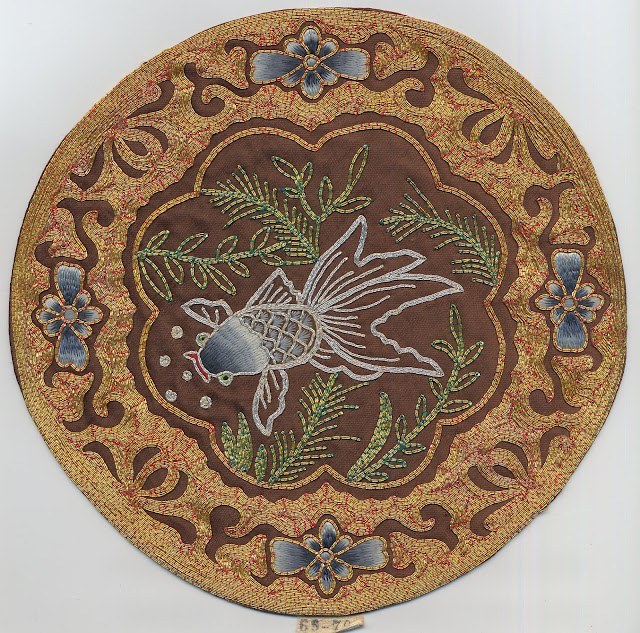 A Chinese Swan Goose  swimming. Notice how the feathers on the wings were depicted. A beautiful effect. 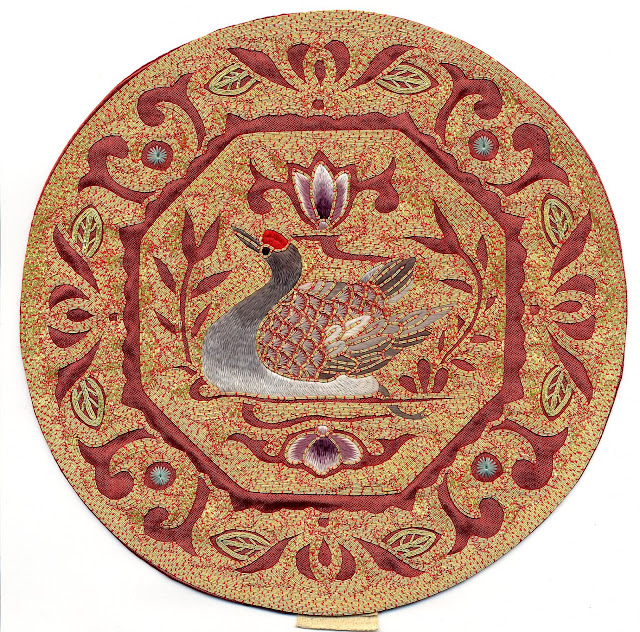 A surprisingly subtle color scheme in this one. Note how the large petals consist of threads running at right angles and anchored by cross stitches. 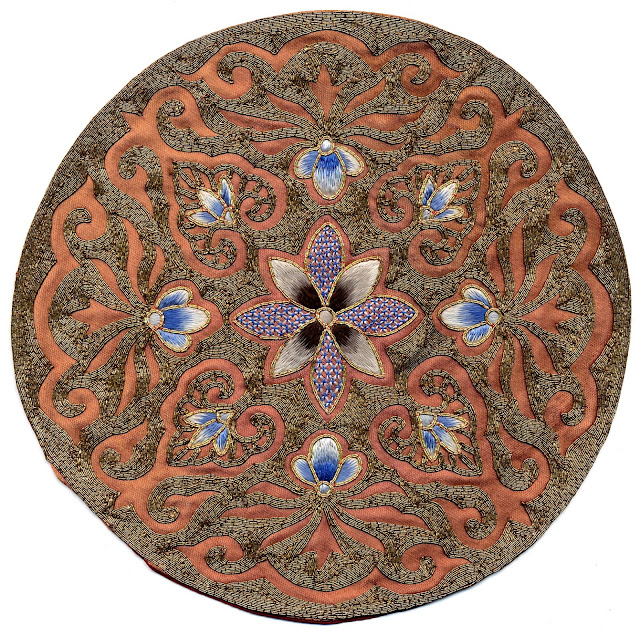 One last one, showing a bird [a kingfisher, maybe] flying or diving between water lilies?. This one is 10.5 inches wide, and did not fit on my scanner. Note the fine shading of color in the silk embroidery. 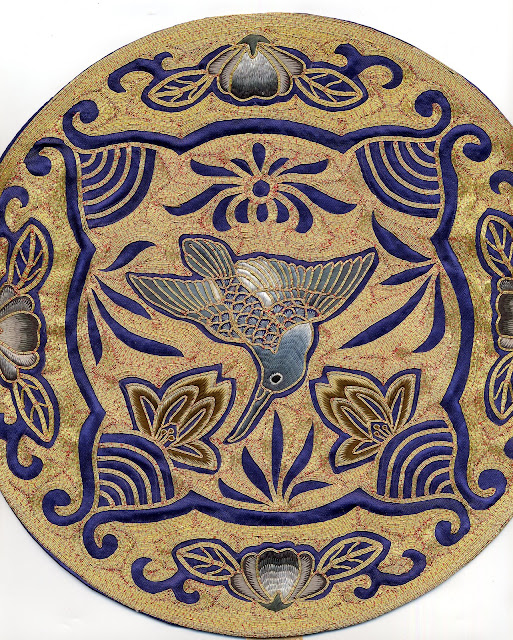 I hope you have enjoyed this post. I certainly enjoy looking at the beauty of this handiwork. If anyone knows what these are for, or has ideas of what to do with them, please let me know. Or perhaps you would like to acquire one.
Let us surround ourselves with beauty, and let us be inspired to make beautiful things to use in our lives.