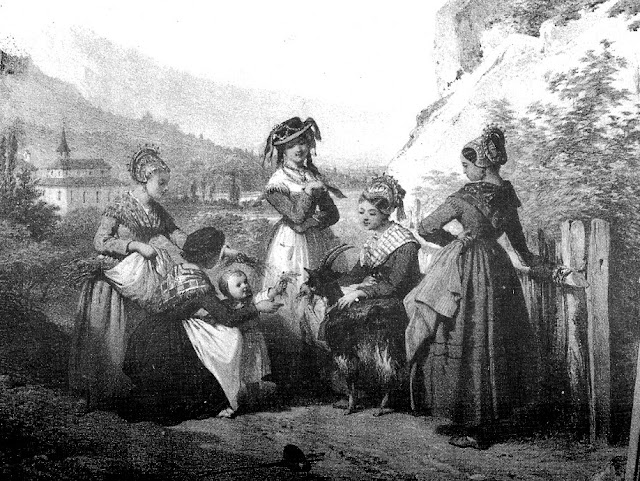 Hello all,
Today I will cover the costumes of Tarentaise, with an emphasis on that of middle or Moyen Tarentaise. For an introduction to Savoy, see my previous posting. In this image above, you can see costumes from various parts of Tarentaise.


The costume of Moyen or mid Tarentaise is one of the most famous in Savoie, along with the costume of the Valley of Arves in Maurienne. Tarentaise consists of the upper valley of the Isere River along with its tributaries. It is divided from Maurienne by a range of mountains. Here is a closeup of Tarentaise.

I will divide this region into three parts,
1. the headwaters at the right, consisting of the area around Tignes and Val d'Isere,
2. The tributaries at lower left, consisting of the Valley of Belleville on the left, the center valley which includes les Allues, and the valley of the Vanoise on the right, with Pralognan at its head.
3. Moyen Tarentaise, which is the main valley from Moutiers up to Saint Foy. In this map there is a highway marked in red which runs up that part of the valley. This is the part of Tarentaise in which they wear the famous Frontiere. 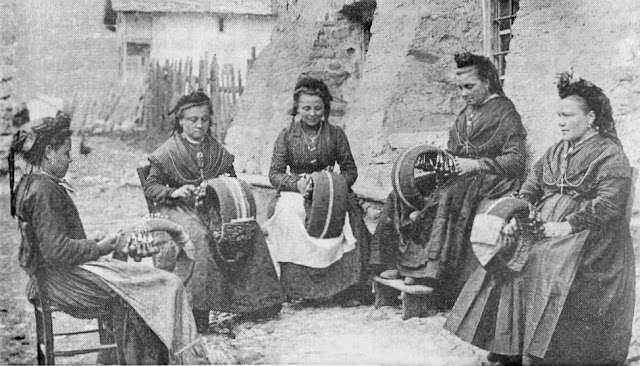 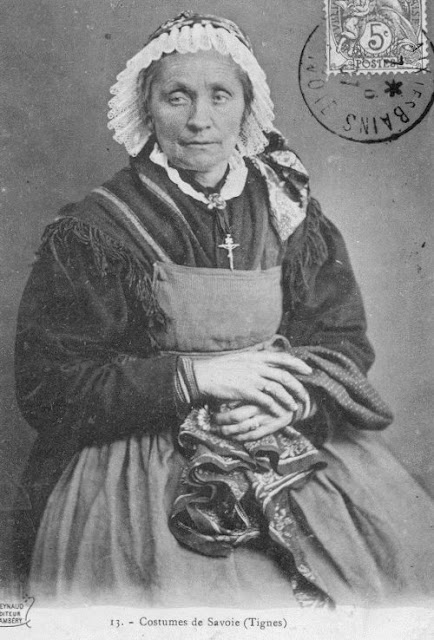 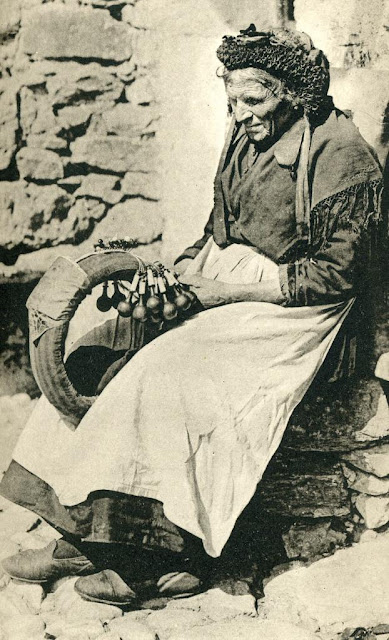 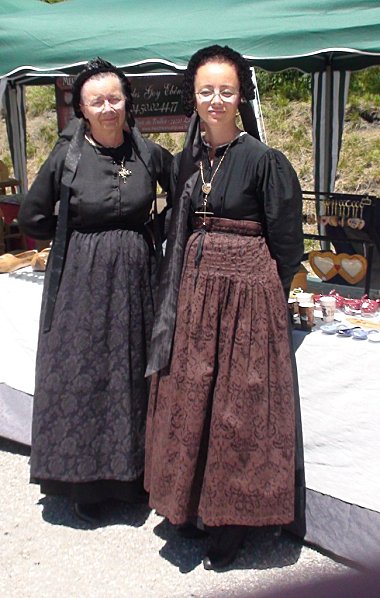 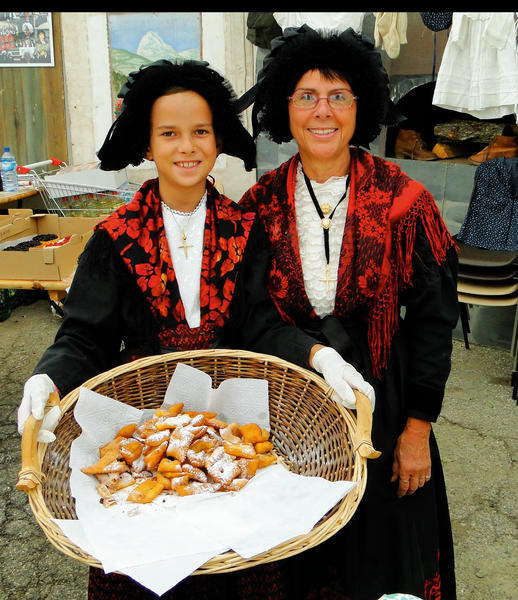 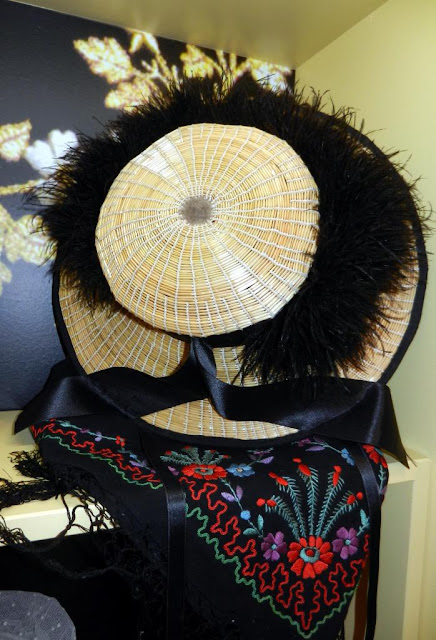 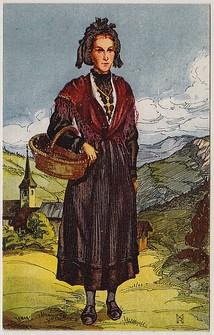 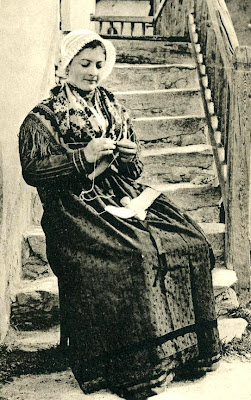 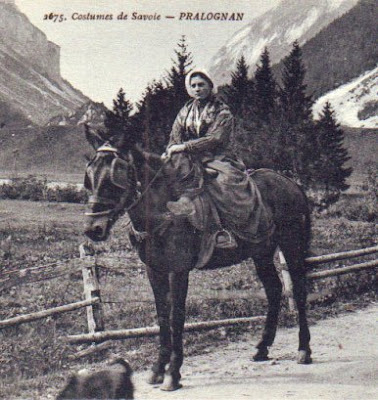 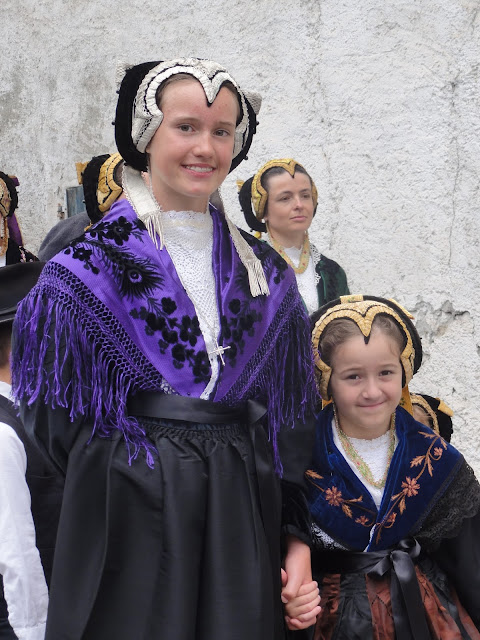 This is the costume which most people think of when they think of Tarentaise. In fact, the basic costume is the same as these above, a dress,  an apron in rich colors. a plastron edged with lace the obligatory cross, and a shoulder shawl. It is made distinctive by the headpiece, known as the frontiere. This looks much like a relic of the Tudor Period, or was there a princess of Savoy which married into the English Royal House? 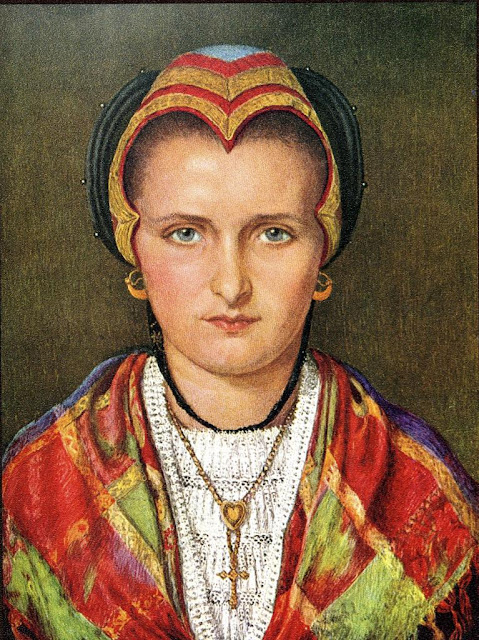 You can clearly see the plastron which is ornamented with lace here. This is pinned in place. A narrow piece of linen with a standing frill of lace is pinned around the edge of the plastron and also continues around the neck. This is called 'guimpe' and is also found in some other regions, notably Arles in Provence. This lace frill acts as a border for the shoulder shawl. Over this is worn the cross with the heart which is typical of the region. You can see the frontpiece, guimpe and cross in these images. 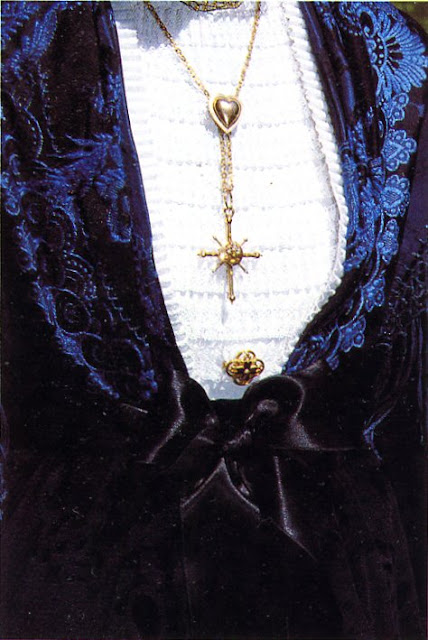 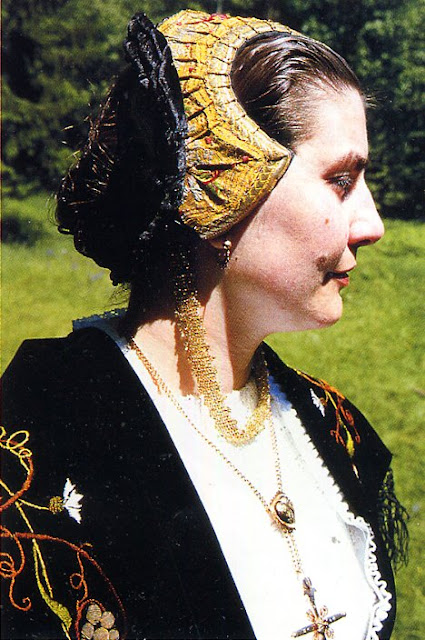 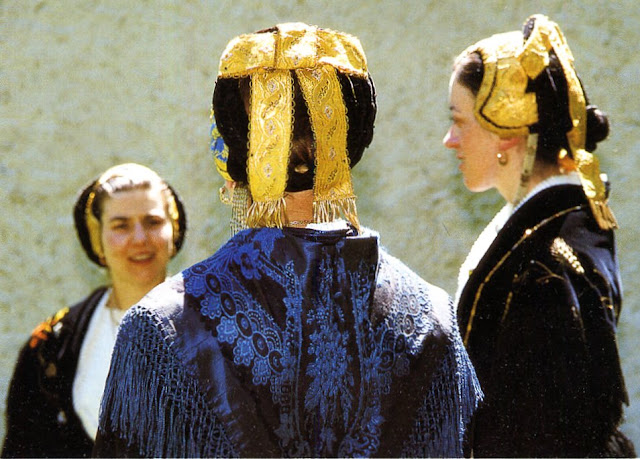 The  shoulder shawl, or fichu, may be of silk brocade, or it may be embroidered. 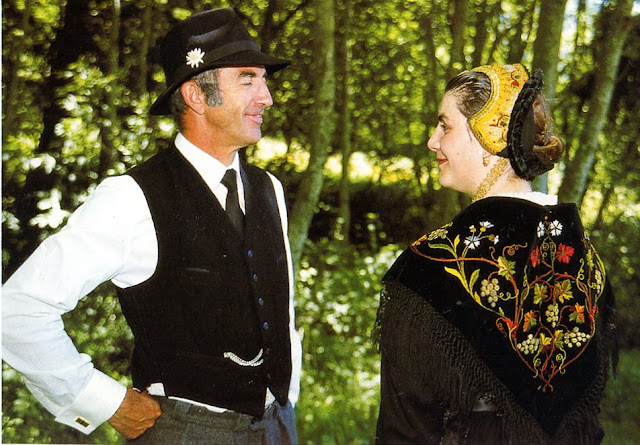 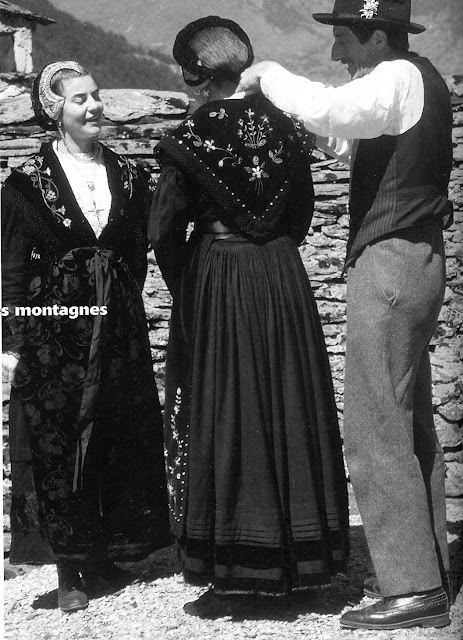 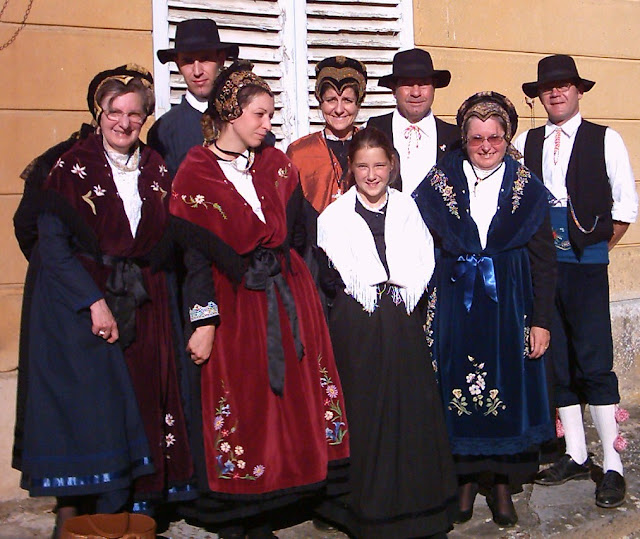 The headpiece is made of several parts, the first is the tricornered piece which frames the head, this is called 'bainda'. This is a piece of cardboard covered with cloth and sewn with galloons, gold or silver.

To form the rest of the 'couache', as the entire hairstyle is called, the hair is braided into two braids, which are pulled into velvet sleeves which are then pinned around the back of the frontpiece. 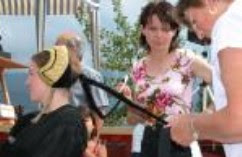 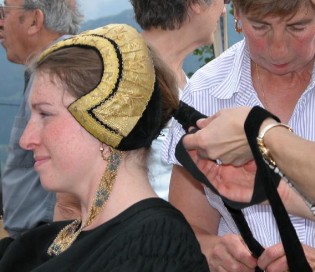 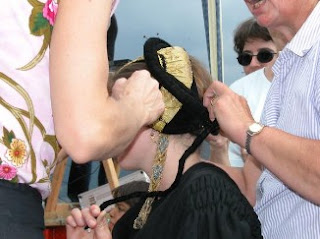 As you can see from the photos, there is a ribbon or a strap braided from beads which hangs under the chin. The headdress may be left like this, with decorative pins around the black velvet braids, or it may be finished off with a ribbon tied in a bow. This ribbon is called 'cordette'. 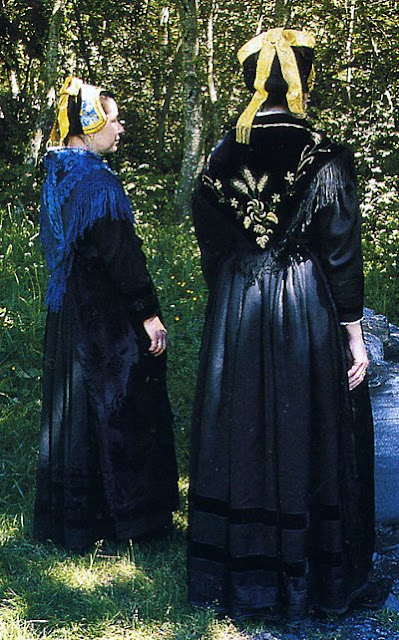 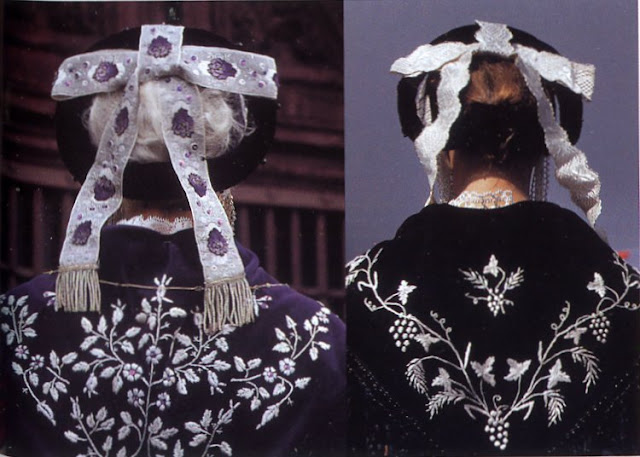 You may have noticed small brooches or pins attached to the plastron either above or below the cross. Another piece of jewelry is what appears to be a locket, the chain of which is draped over the fichu, and which is then apparently pinned low in front. 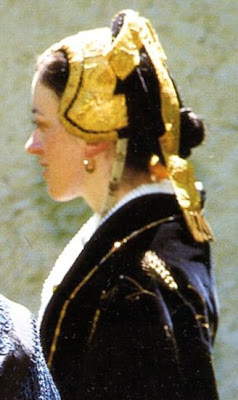 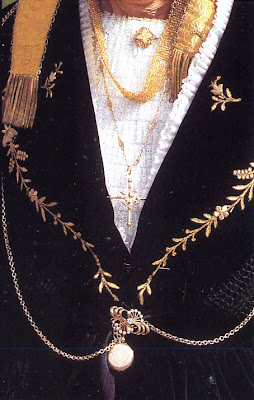 There is no doubt that this is one of the most striking and elegant folk costumes in all of France.
Here are just a few more images for you. 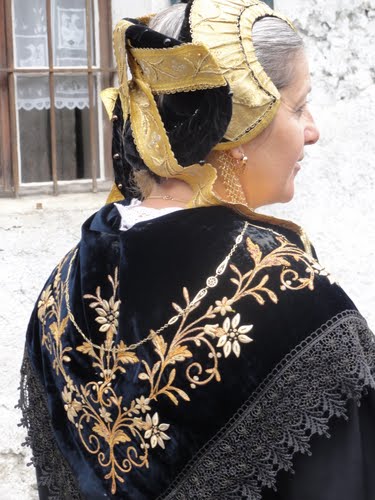 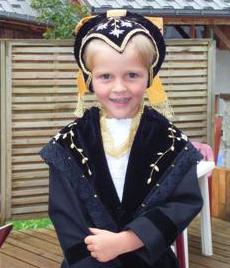 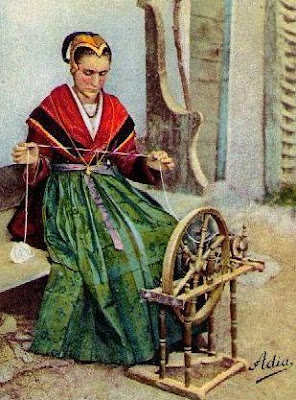 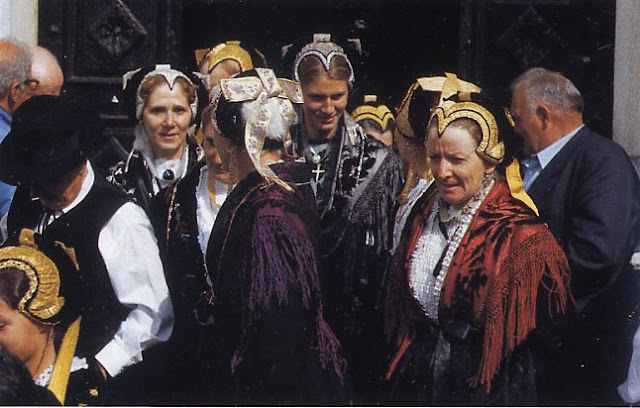 Thank you for reading. I will cover the costumes of Maurienne in another posting.  I hope you have found this interesting and inspiring.