Today i am going to stay in west central Halychyna, and talk about the very ancient and unique embroidery of county Horodok. Here again is our map, and you will see that Horodok county is just east of Rudky county, which we talked about in the last posting. Horodok has the standard Halychyna costume, which i talked about two postings ago, but is distinguished by its embroidery. Here are two old photographs of women in Horodok costume. The first one is a back view, showing the densely gathered maliovanka, the hand printed linen skirt, and matching embroidery on the shoulders and the kerchief. 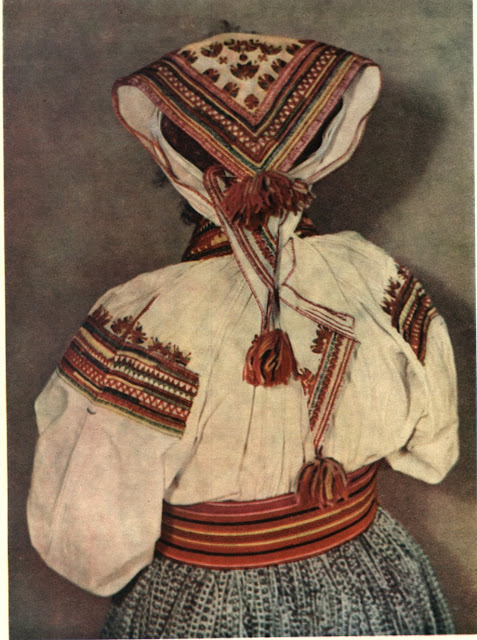 This embroidery is made up mostly of flat stitching, which is certainly found in Horodok, and also in Nesteriw and Javoriw, two neighboring counties, but Horodok is especially noted for its own particular embroidery technique, visible in the folowing photograph. 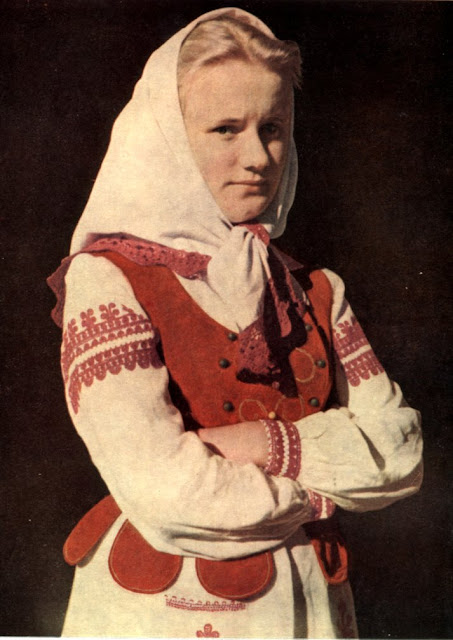 She is wearing a double breasted vest with lappets instead of a peplum and topstitching on the front, somewhat reminiscent of the Pidliashia costume. The embroidery is done either in a brick red or dark blue, with some addition of black, white and perhaps one other color. Here is a graph of a typical example. 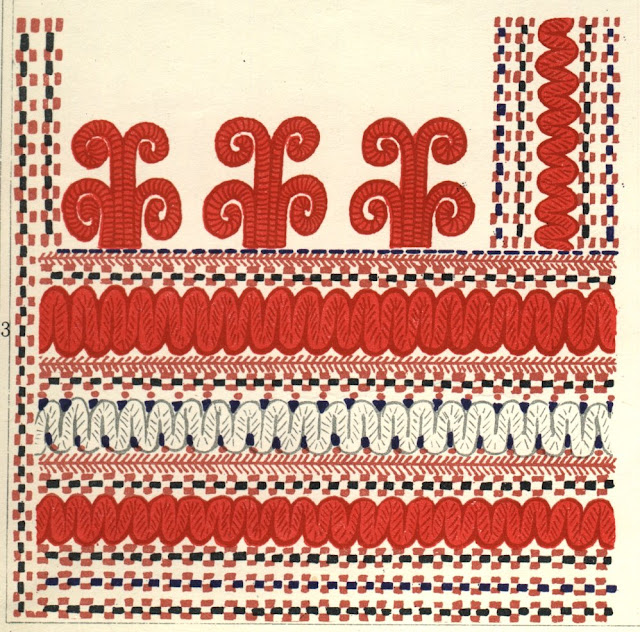 ﻿You can see three of the typical motifs in this graph. This is the shoulder inset of a woman's chemise, but only just over half of it is shown. The stripe on the left frames one side of the inset, and of course repeats on the other side, and the stripe on the right goes up the center. Thus you get six of the 'palm' designs all total. The dashes represent running stitches 'zavolikannia'  that go across the design, in pairs or threes. They are executed like this.

The 'palms' and the 'snakes' are made of wide chain stitch, and are two more basic features of this style of embroidery. This is sometimes called 'double blanket stitch'. They are executed like this.

﻿
Two more basic motifs of ths type of embroidery are called 'moons' and 'half moons'. Here is an example of a design which includes them. 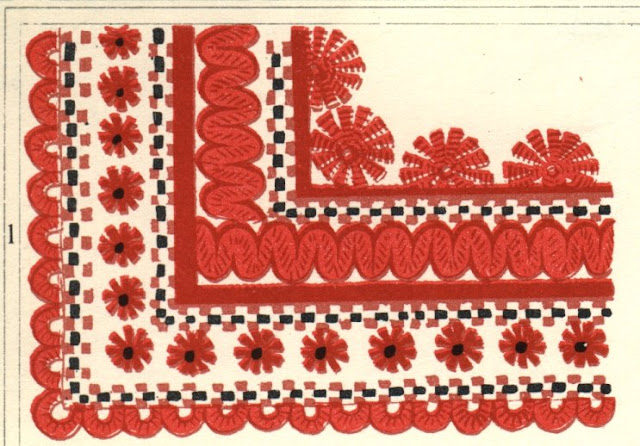 ﻿This is the design on the corner of a collar. You can see the moons, and half moons. The loops on the edge are made by sewing loops of several threads and then covering them with blanket stitch. Here is a photograph of a cuff done in this technique 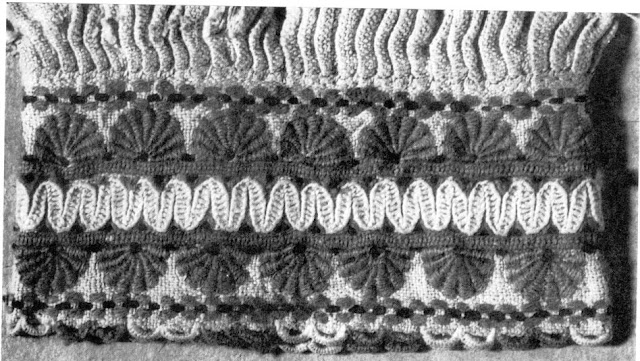 The moons and half moons are executed like this.

There are some stand alone and edge designs which go with this type of embroidery. Here are a couple examples. These remind me, in a very general sort of way, of the embroidery of the Kurpie, in Poland. 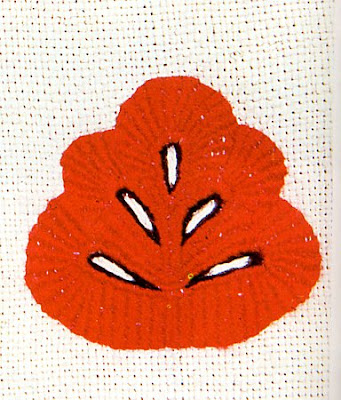 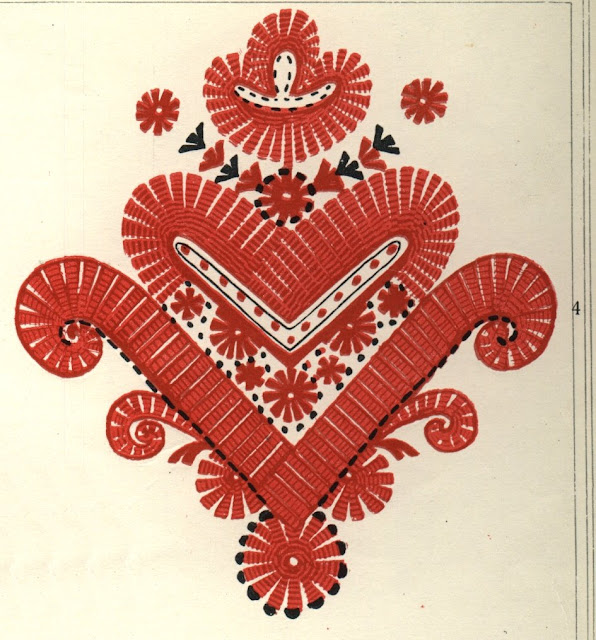 These are done with the same stitching as is used for the moons and half moons. Sometimes a thread is laid down underneath the line of satin stitching for additional texture. You can see the edge of a design of this type on the apron pocket of the second woman photographed above. Sometimes the half moons are sewn close to each other, but offset, so as to make a sort of zigzag, like these two examples. 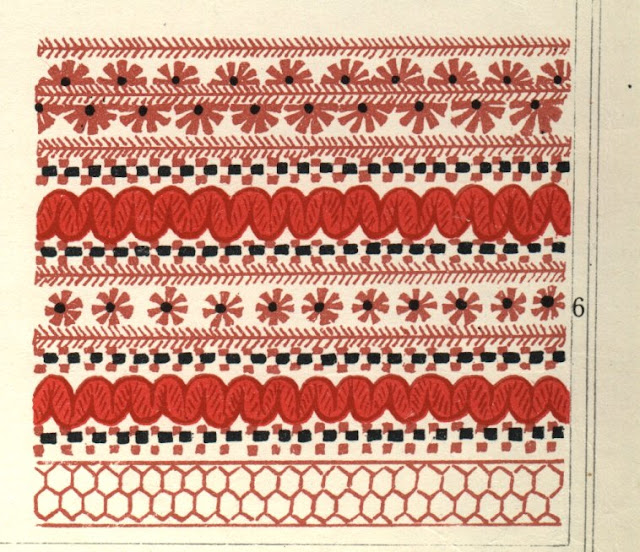 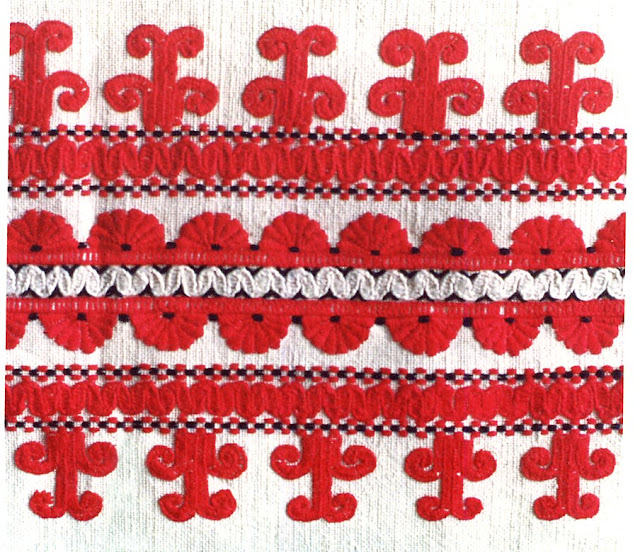 This is a modern piece, and is well done, except I think it would have worked better with a less bright red thread and a less bright white background. This is of course, not the only type of embroidery done in Horodok. The woman in the first photograph has embroidery made up of flat stitching done in different directions, reminiscent of Javoriw embroidery. Here is one example of such a design, including yet another varient of the 'moons'. 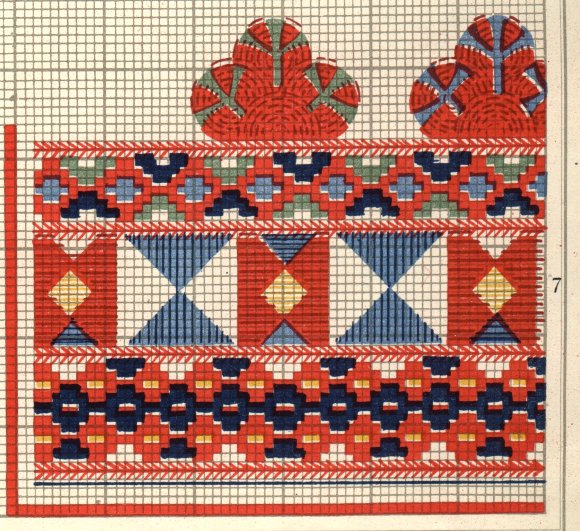 ﻿
﻿This is also from a shoulder piece of a woman's chemise. Notice the presence of herringbone, back stitch, and possibly cross stitch as well as the Horodok stitching. Of course, here as elsewhere, cross stitch has made inroads, and you sometimes see designs in which the running stitches [zavolikannia], the moons, the edge designs and the snakes are approximated in cross stitch, as in this design. [something i personally disapprove of, because it diminishes the richness of the embroidery repetoire]. 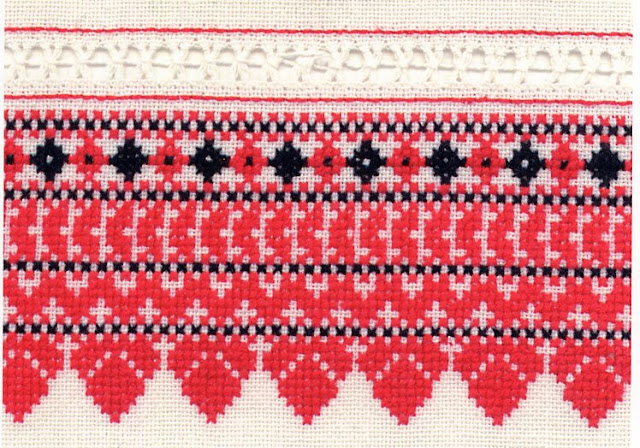 Of course, no place is in a vacuum, and here are two examples of old chemises which combine Horodok stitching with Rudky county style embroidery. [remember the two counties adjoin]. The one on the right has cross-stitch-ized snakes and edge designs, the one on the left has real Horodok snakes in white, but cross-stitch-ized edge designs and half moons. Rudky style red roses are found in between. 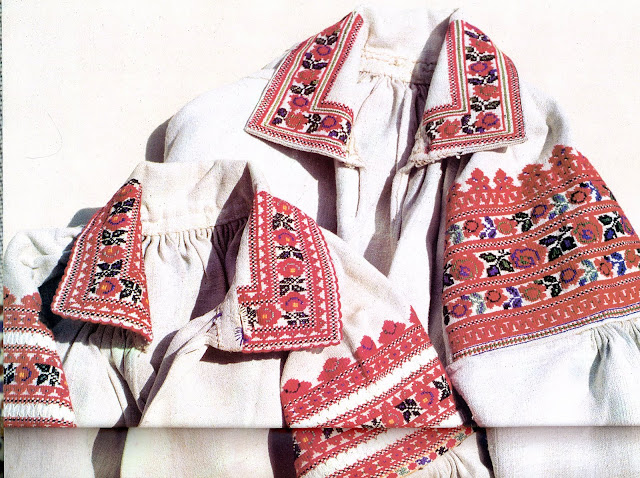 Occasionally, as i mentioned, you will find the Horodok designs done in dark blue and black, like this. This was possibly for older women, but i have no direct information that such was the case. The triangles were done in counted flat stitch, the dots probably in knots. 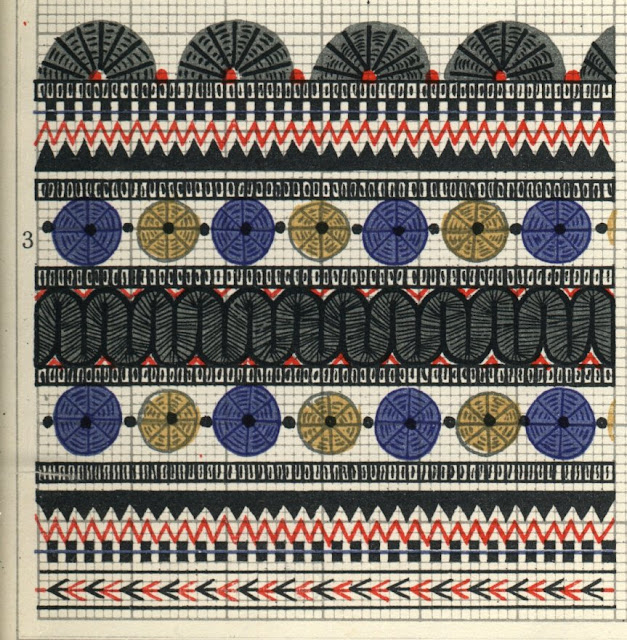 Here are two more examples of chemises done in traditional Horodok Stitching. You will notice that the bottom half of the chemise is made of a much coarser linen, because it doesnt show. This was very common. 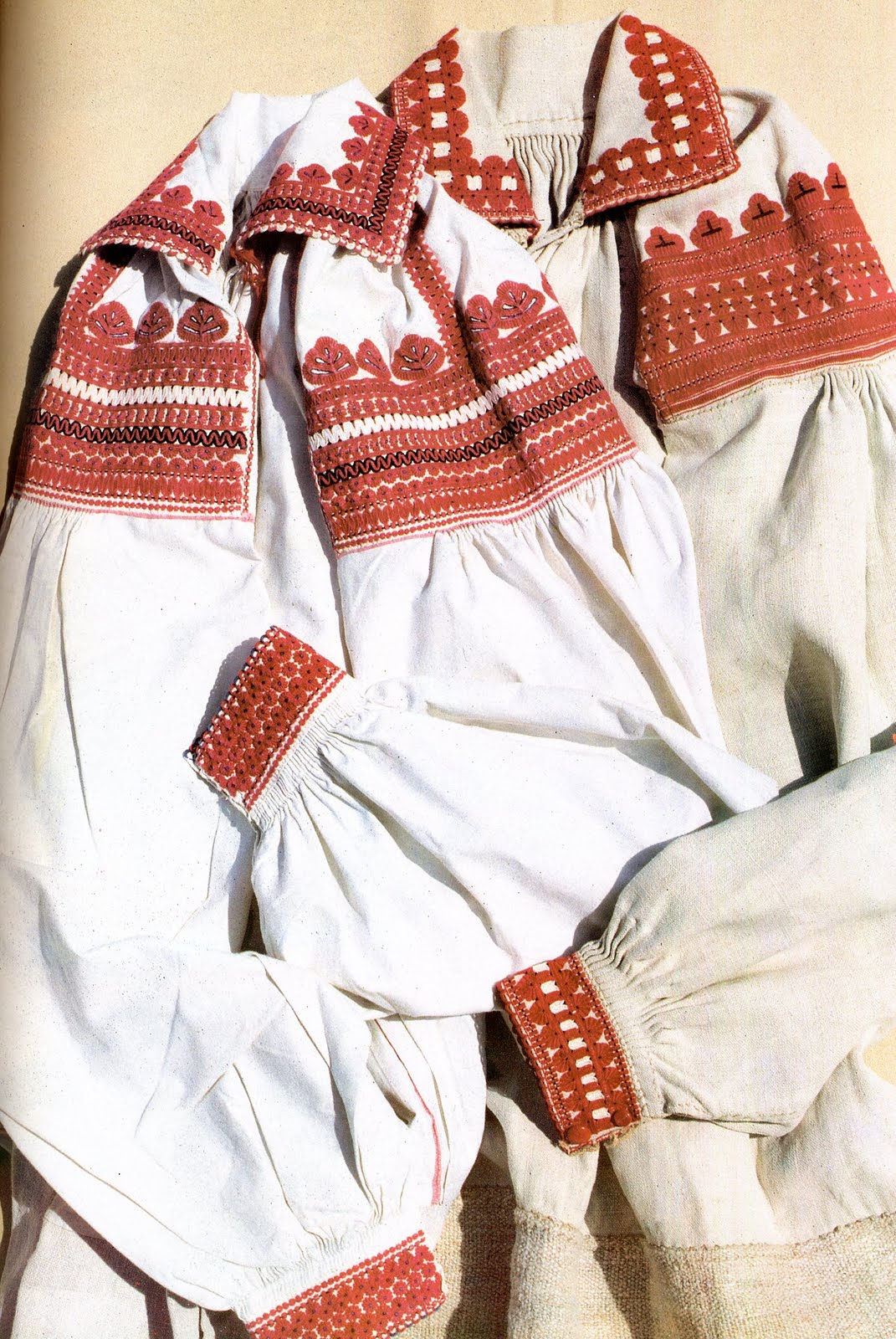 And just to make things even more confusing, here is a photo of chemise shoulder and collar embroidery done in Horodok style Haft [satin and stem stitch embroidery]. 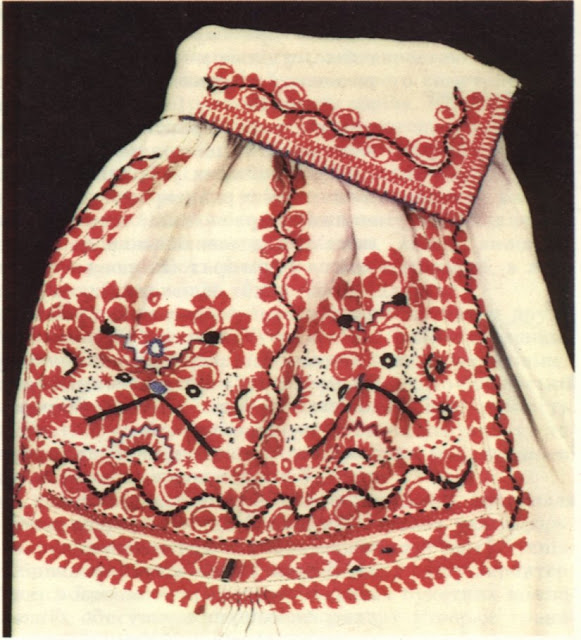 Thank you once again for reading. For those who are only moderately familiar with Ukrainian Embroidery and found this surprising, i am glad that i was able to show you something new. There are actually yet more styles of embroidery done in this area that i did not touch on today. I felt that this was sufficient new material for one posting.

I hope that this inspires someone to go and make something. I think that it is a great loss that we no longer surround ourselves with things of beauty that we or those we know have made. It is a tradition that bears revival.

Please feel free to contact me with requests for topics for research. I also accept commissions to research/design costumes for performing or other groups or individuals. I also sew and/or embroider on commission as well.