Today i will continue my series on costumes of Halychyna. Javoriw [Yavoriw] county has a costume which was used longer and is better known than many other parts of Halychyna. In many Ukrainian books about folk costume which cover the entire country, it is presented as THE costume of Halychyna, or at least of Lviw Oblast, mostly because of lack of space. Here again is our map, so you may orient yourselves. 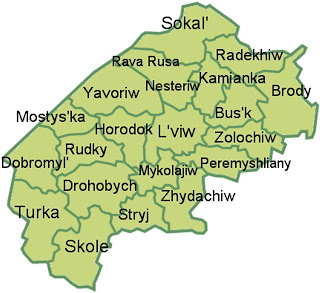 You will see that it is adjacent to Horodok county, and very close to Rudky county. Here are photos of a front and back view of a woman wearing the Javoriw costume. 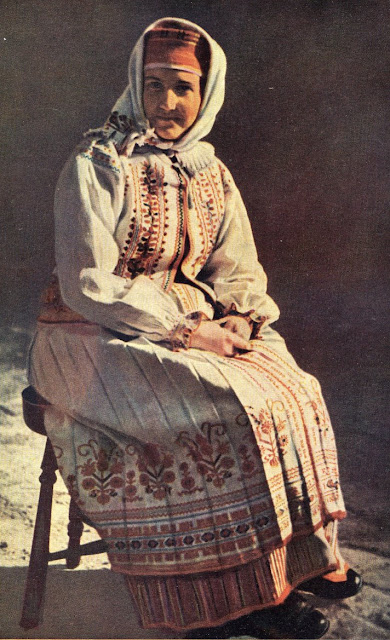 You can see that this is a variant of the Halychyna costume. It belongs to the fourth group of Ukrainian Costumes, those which include an actual skirt. In differnent regions the skirt may be refered to as spidnytsia, andarak, bunda, or litnyk. In this regions, the skirt is referred to either as Shorts or Maliovanka, depending on the type of skirt. The base of the costume is a chemise [sorochka] with folded down collar and embroidery on collar, cuffs, shoulder, and possibly upper sleeve. The apron is made of two widths of cloth, joined with a decorative stitch, and embroiderd along the seam and for several rows along the hem with hemstitching and simple cross stitch designs, mostly in red and black. They wear their own version of the kamizelka, or instead a similar garment with sleeves called the kabat, both of which are embroidered. On the head is worn an embroidered ring of cloth, the bavnytsia, and over that is tied a kerchief, either embroidered or store bought. And of course, the indispensable sash. There are three styles of embroidery used in Javoriw, the hemstitching and cross stitch used on the apron and sometimes on the chemise, haft [hapt], consisting of satin stitch and stem or chain stitch floral designs in a style unique to Javoriw, or the famous Javoriw style embroidery, which was originally used on the bavnytsia, the headband, later on the chemise, and is now popular on all sorts of items across Ukraine.  Here is the cut of the chemise. the lower sleeve is gathered a bit on the top, in the middle of the shoulder inset [ustawka], but this drawing is rather exaggerated. 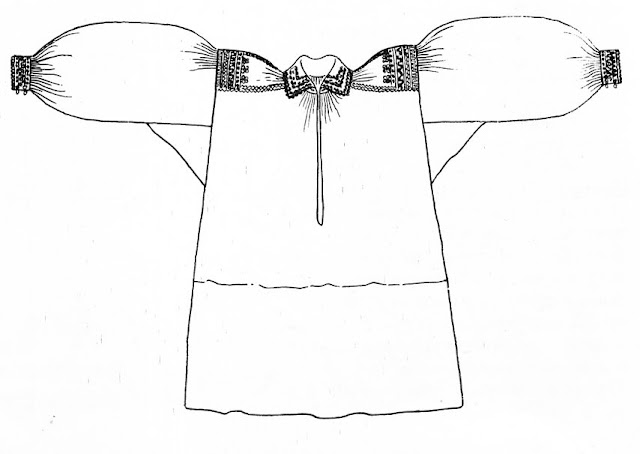 In more recent times, the chemise did not show below the hem of the skirt, because of the influence of western fasthion. You can see the distribution of the embroidery, except that additional embroidery was often introduced on the upper sleeve, with a break in the middle for the gatherings. As i mentioned, there are two types of skirts. The first one is called the Maliovanka, and was worn over all of Halychyna. It was made of linen, and hand block printed with designs in black. Here is an example. 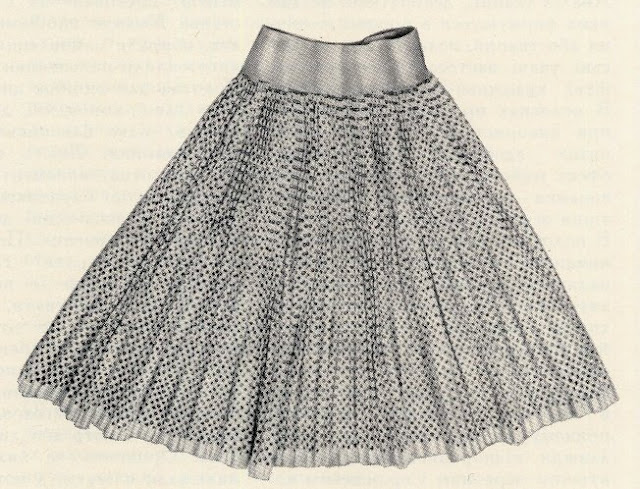 The maliovanka was made of four loom widths of linen, finely gathered into a wide linen waistband on three sides, but left smooth in front, under the apron. The hem was left unprinted. The opening is in front, and there were two cords attached to the front of the waistband, which wrapped around the waist and tied. The other type of skirt is being worn by the woman in the photo above, and is called shorts. It has a linen or hemp warp, and the weft is of wool, woven in colorful narrow stripes. Again, it was gathered and sometimes finely pleated on three sides. A braid was attached to the bottom hem, and made a decorative braid on the front, under the apron. Obviously this was a garment more suitable for colder weather. Here are three examples. 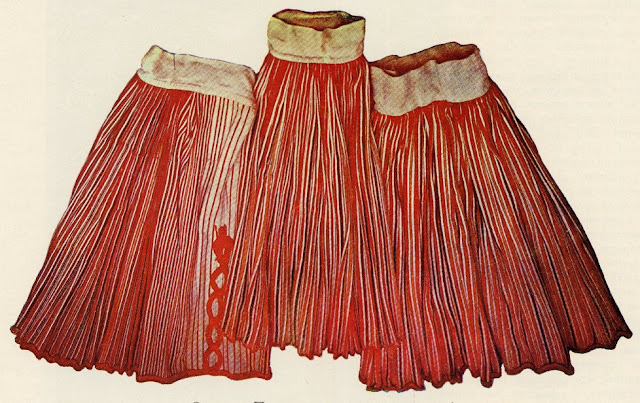 Here is a schematic of an apron. This is the most common layout. Sometimes there are fewer rows of embroidery and hemstitching. Sometimes, as in the photos above, a larger design is used for the top row. 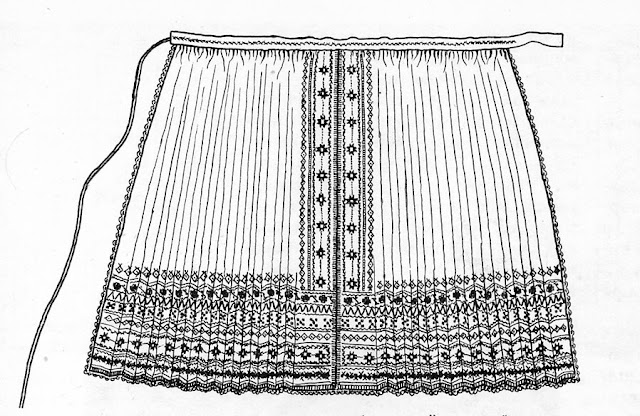 Here is yet another example of an apron. 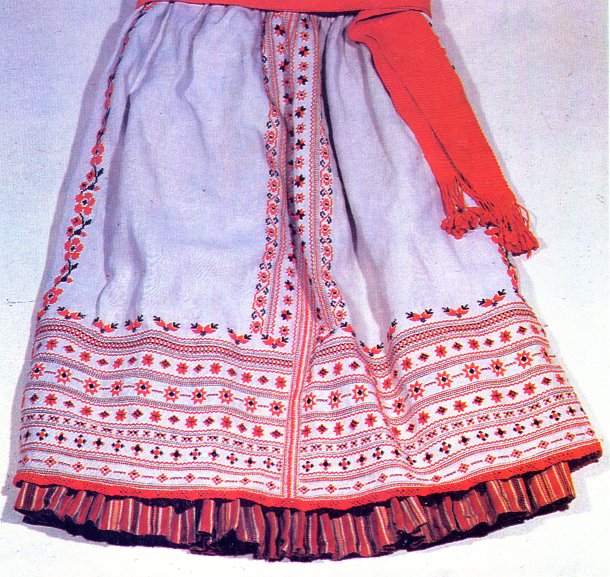 As you can see, the designs are typically very simple, but varied, and build a design in stripes.

The sash was either woven on an inkle loom, or finger braided. Here are a couple examples. 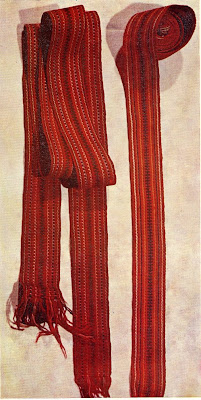 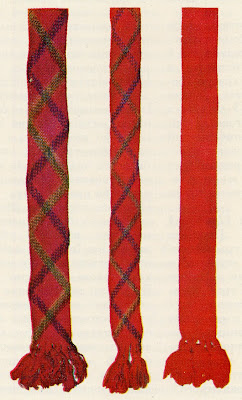 Of the Kabat and Kamizelka, the Kabat is the older garment. It was made of linen, cut straight on the sides, or with the upper sleeve cut out of the body piece, which was folded over the shoulder. A circle was cut for the neck and a slit made for the front opening. The mid and lower sleeves were added on. Typically of a twill weave, it was worn by both men and women. It was embroidered down the front, on the collar and cuffs, and around the hem. Here are a couple of men's kabats, which retain the original cut. You can see the embroidery typical of the linen kabat here, which is also often used on the kamizelka, it is identical to that used on the apron. The kabat on the left is embroidered mostly in waxed linen thread, which gives the yellowish color. The men's shirt is the same cut as the woman's chemise, and was only embroidered with topstitching in the same waxed thread, forming rectangles to hold the pieces in place along the edges, rarely was any design added. 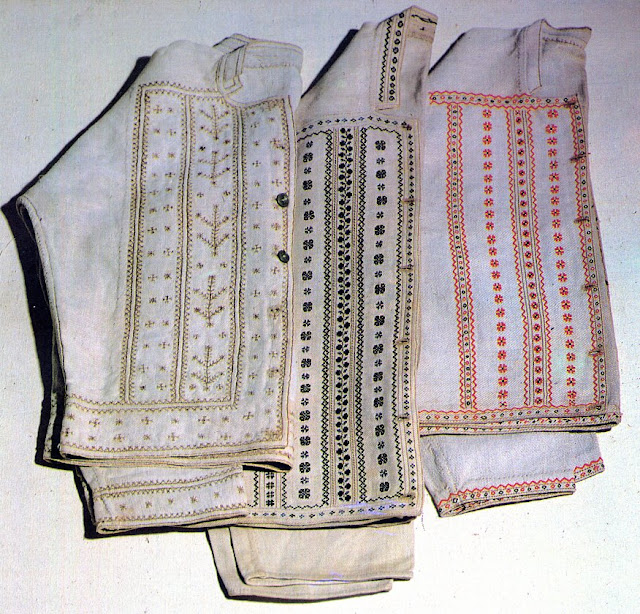 The woman's kabat later came to sometimes be made of wool or other store bought cloth. Here are a couple of examples. 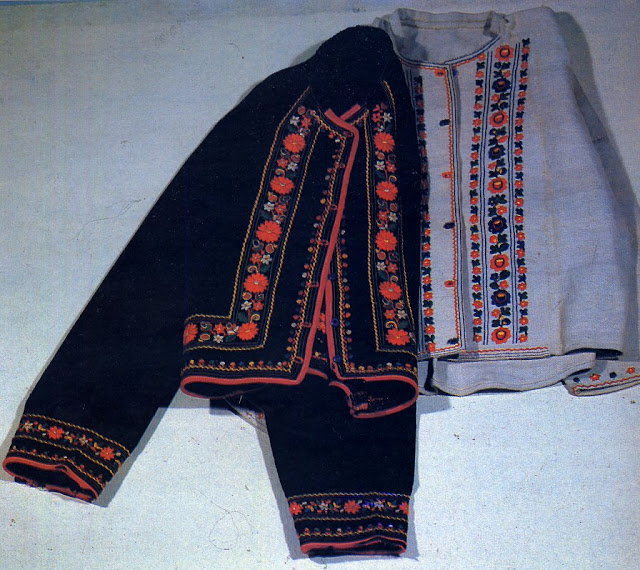 Both of these examples are embroidered in Jaworiw style haft. The kamizelka was derived from the kabat by the loss of sleeves, and then cut along more modern lines so as to be somewhat fitted. Here is a schematic of the cut of the kamizelka. 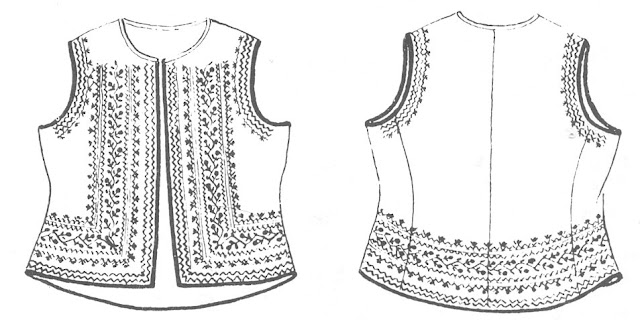 The headpiece, bavnytsia, is one of the singularites of this costume. Here is a sketch of the bavnytsia worn by itself by Kul'chytska. 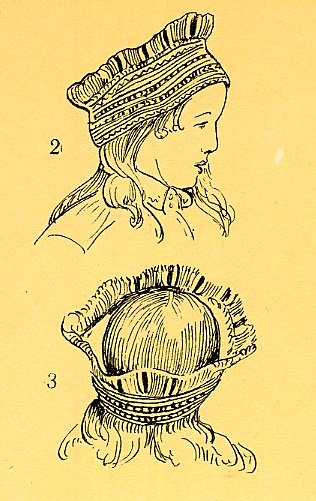 It is a ring of linen, folded over, with the special Javoriw stitching all the way around, and fringe added to the top edge. Over this was originally worn a namitka, which was later replaced by a kerchief. Here is an example of a kerchief embroidered in a similar manner to the apron and kabat, as is the one in the photograph above. The fringe was also made by hand and stitched directly onto the kerchief. 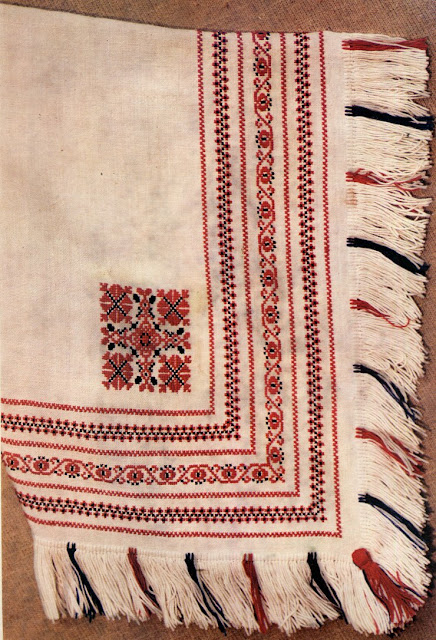 ﻿Later on, kerchiefs were also embroidered in the haft technique. Men's costume was finished with a sash similar to the women's, linen pants, boots or footcloths with lychaky [shoes woven of  birch or linden bark, although in Jaworiw it was more common to use dried reeds], and a straw hat. Both sexes wore a plain linen overcoat, as seen in the two following sketches, and of course, coats of wool or sheepskin in cold weather.

Thank you all for reading. I will continue in my next posting with an examination of the embroidery of this region. I think this one is long enough already.

Again, please feel free to contact me with requests for research, or commissions to design/research costumes for groups or individuals, or to sew or embroider.

Let us surround ourselves with handmade things of beauty.