Ukrainian Costume of Halychyna [Galicia] in the work of various Artists

Today i want to talk about the village costume of Halychyna [Galicia] in general. This is one of the areas that developed early, which is to say that the traditional costume gave way to western factory made fashions earlier than other areas which 'developed' later. This makes the local costume harder to trace. Some local regions, such as Javoriw, Sokal', Drohobych, Skoliw, have well attested costumes. Halychyna also includes part of the Hutsul lands and most of the Boiko lands, which are considered distinct from the costume of the lowlands. The areas most remote and difficult to reach retained their traditional costumes longer. In general, books which cover all of Ukraine, present the Javoriw costume as THE costume of Halychyna, because of lack of space.
Halychyna  is generally considered to include the oblasts of Lviw and Ivano-Frankiwsk [formerly Stanyslaviw], politically it included Ternopil' oblast as well as some territory which is now in Poland, up to the bank of the Sian [San] river. Halychyna was part of the Kieven state, more of a commonwealth of local rulers than an 'empire'. In 1199, Halych united with Volyn' to form the Pricipality of Halych-Volyn' [Galicia-Volhynia in Polish and in old documents]. This flourished as an independant state, especially under King Danylo Romanovych. The capitol was at first in the ancient town of Halych [Galich], which seems to indicate a Celtic presence in the area. I have found no more indication of such, just the bare name of the city. King Danylo founded the city of Lviw, which has been the capitol of Halychyna ever since. The area passed under the rule of Poland around 1400, when the area was considered to also include the Peremyshl, Sianik and Cholm [Chelm] districts. When the Polish Empire was partitioned, all of Halychyna came under Austria. The Austrians expanded the Province of Galicia with the addition of  Malopolska. Thus Austrian maps of that era show a large area named Galicia, the west half being Polish and the east half Ukrainian [Ruthenian]. After WWI, All of the Austrian Province of Galicia was included in the new Polish state, both the Ukrainian and the Polish sectors. The Soviets invaded the area on November 1, 1939, and after some
back and forth during the war, held most of Ukrainian Halychyna untill Ukrainian Independance in 1991.
And that is as much history as i am going to put in this article. Here is a map of the area which i will be speaking about. 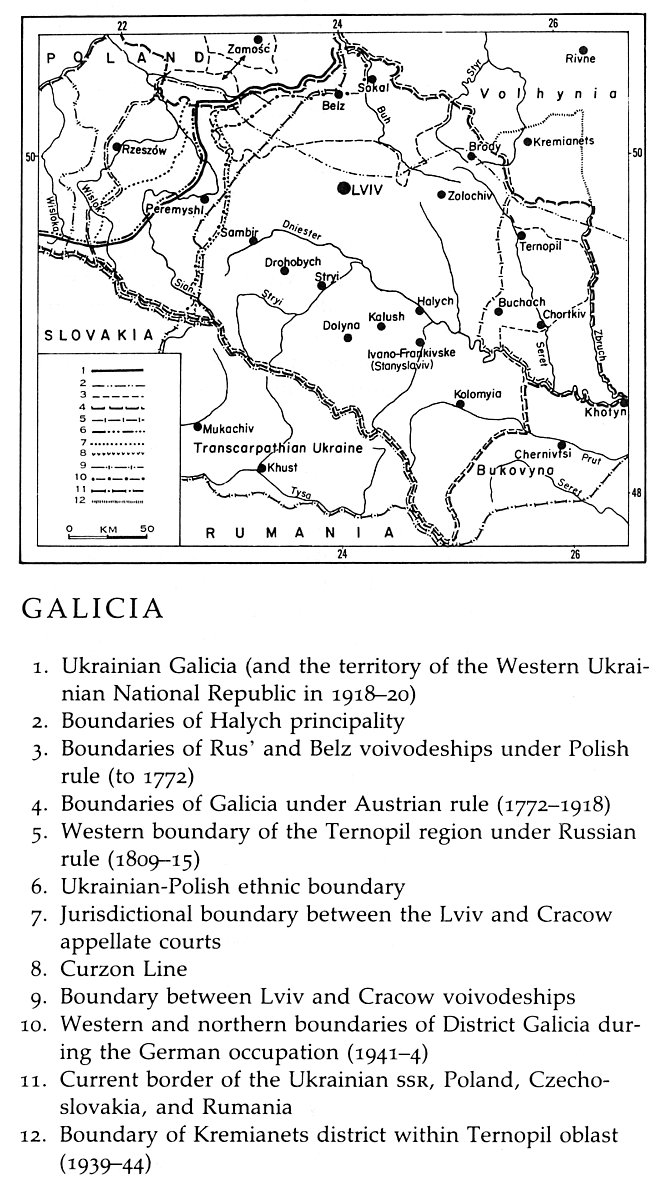 As you can see, the north and west borders are controverted. The southern parts of this area, consisting of western Podillia south of the town of Chortkiw, Pokuttia, being south of the Dnister, Hutsul and Boiko lands in the mountains will not be included in this posting. The rest of the area had more or less the same costume. I will not be covering the Sokal' or Javoriw costumes, they will be for future postings. I am also excluding the 'town costume'.
The Halychyna costume belongs to the fourth group of Ukrainian costumes, which include an actual skirt. There are many local variations, the most important one being the style of embroidery, which varied quite a bit from place to place, some local embroidery styles being very unique. Here is a painting by Kul'chytska showing a woman from the area around the town of Rudky, west and somewhat south of Lviw, specifically from the village of Vyshnia. 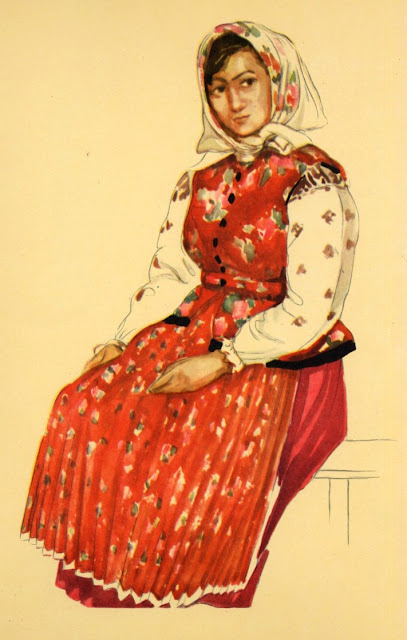 This basic costume is worn over this area, and is mosty attested to by artists. The chemise is the basic ustawka cut. 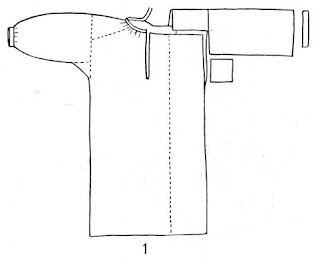 ﻿With embroidery on the shoulder insets, always across the bottom edge, next to the sleeve, but often outlining the two side edges as well, and sometimes a stripe up the middle. This varied from county to county. You will notice a stripe of dense embroidery on the inset in this painting, and then small motifs scattered across the sleeve. This was often done by individual embroiderers who wanted to do more.
The skirt was at first made of white linen with embroidered or woven ormament around the hem, or block printed by hand in black, often with fine designs or vertical stripes. The printed skirt is called 'maliovanka'. This was soon replaced by factory made cloth in most places, as in the above example. It was usually gathered on the sides and back, but left flat on the front, under the apron. Sometimes it was pleated.  The apron was made of linen, with embroidery across the bottom edge, sometimes of one width of linen, sometimes two were sewn side by side and gathered into the waistband, sometimes of bought cloth, as in the Kul'chytska painting above. Here is a painting by E. Kozak showing this costume. 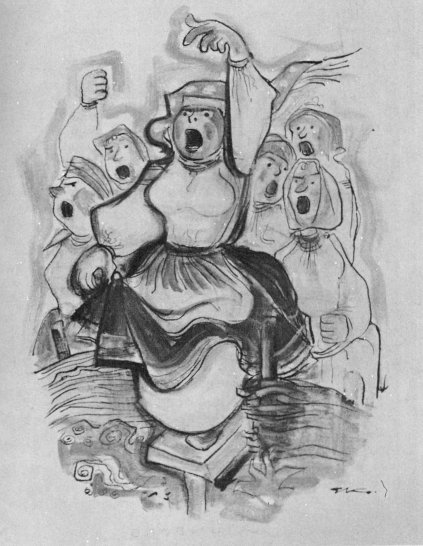 This work is called 'Soyuz Ukrainok' [Association of Ukrainian Women]. It clearly shows the chemise, the skirt, the apron and the kerchief tied over a cap [chepets] or ring of wood covered with cloth [kybalka]. Notice the ribbons on the lower part of the skirt, these were also put on the apron if it was of factory cloth.
Kul'chytska also shows a vest which buttons down the front, with a hip length peplum. This is called kamizelka. Here are two more paintings of E. Kozak showing the kamizelka as well, front and back. 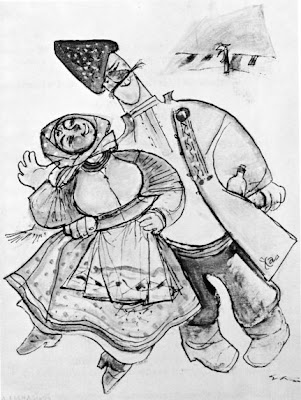 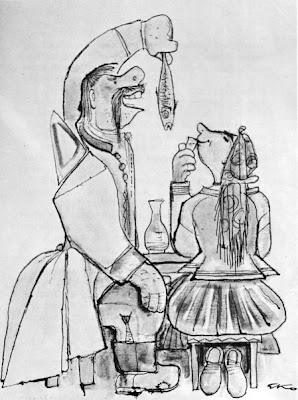 The top one is called 'happiness' [notice the tavern in the background, the Chassidic tavern keeper standing out front]. The bottom one is callled 'temptation' this guy evidently is very fond of smoked herring. Both are meant to be humerous, but also show a costume consistent with that painted by Kul'chytska. The men are shown in embroidered shirts, pants of linen or bought wool, boots, fur hat and decorated overcoat of heavy wool, the svyta, sometimes in summer made of linen, in which case it is called 'polotianka'.
Just to verify this costume from another direction, here are two paintings by a third artist, O. Kurylas. both were printed on postcards in Vienna in 1918, illustrating a popular humorous song about the WWI era attempt at Ukrainian Independence called 'Bo Vijna Vijnoju' [Because War is War]. 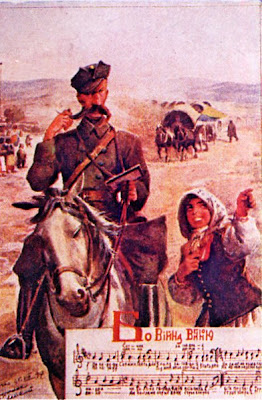 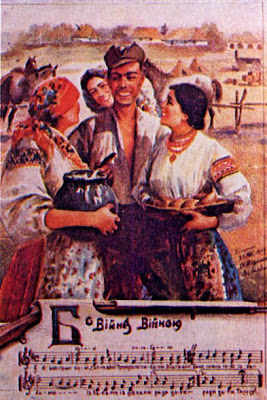 Both of the men are shown in the military uniform of the UsUsUsy,  the Ukrainian Riflemen. You can see substantial agreement in the costumes depicted on the women with the previous artists.

Here is another depiction by an unkown artist. It was printed on a postcard in Germany in 1918, under the title 'Solitude'. 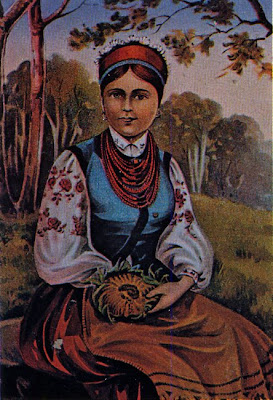 She is shown holding a sunflower head, a common symbol of Ukraine. She is wearing a blouse with cross-stitched roses in red and black, which is more common in Eastern Ukraine, a band on the lower ustawka [inset], and other on the upper sleeve. She is also wearing a 'wreath', open on the top, covered with cloth, and what appear to be flowers made of beadwork on the top edge. Her kamizelka is of blue cloth with black velvet edging, which from written sources, seems to have been very common. 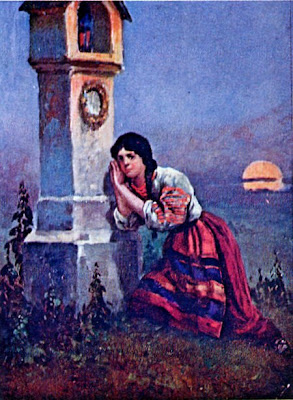 This is a painting by A. Sytkovych, entitled 'Hore' or 'Grief'. It was printed on a postcard in Lviw in 1919.
This is clearly of an unmarried girl because her head is uncovered. The bottom of the inset is embroidered, as well as the top of the sleeve. The bulk of the embroidery being in red, as well as the narrow apron with stripes over most of it, which are possibly woven in, tends to indicate that this may be a costume from Volyn' which is north of Halychyna. The costume does not differ substantially, except in details. And one last painting, this one by another unkown artist, printed on a postcard in Sweden in 1914. 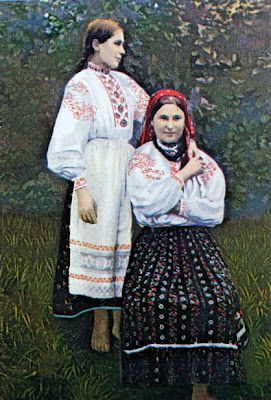 The girl standing on the left has a linen apron embroidered in red with white openwork. The seated woman has an apron in the same material as the skirt. edged with ribbon. There is an open design embroidered on the insets, which is repeated in a wider stripe on the upper sleeve. This indicates that this may be depicting a costume from further east. In Halychyna the embroidery designs are usually more dense. In the 20th century, many women in the areas which wore the plakhta or obhortka costume switched to regular skirts, which could be made from bought material, while both the plakhta and the obhortka had to be woven by hand.

Thank you for reading, as always. It did not occur to me until recently to put these paintings together in order to research a particular costume.

As always, feel free to contact me with requests for research, or commissions to research, design, sew or embroider costumes or other items for groups or individuals.