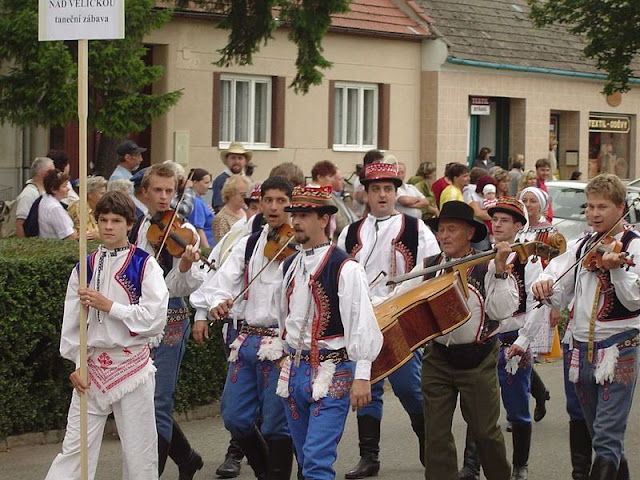 Hello all,
Today I wish to continue my last posting with a description of the mens' costume of Horňácko.

There is a white linen shirt with narrow band of embroidery around the neck and on one side of the overlapping front opening. It is held closed with 4 narrow white ribbons. Like the womens' costume, the color of the embroidery varies with the occasion. 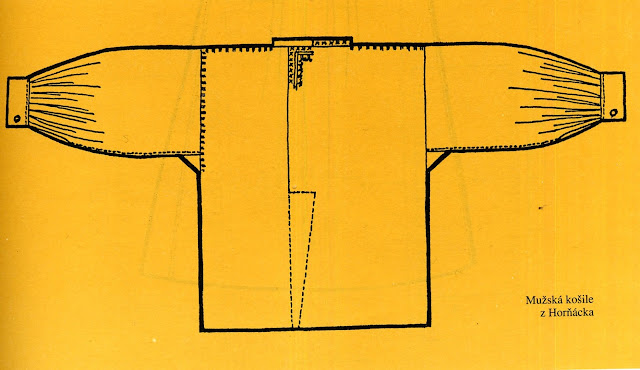 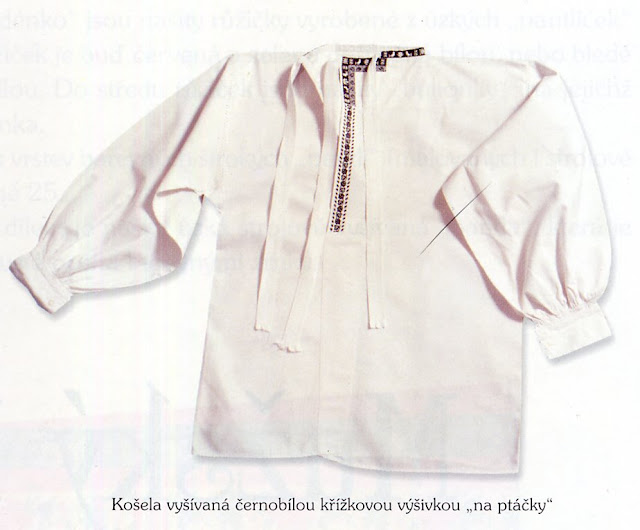 For boys and for work, simple linen trousers are worn, such as can be found throughout the Carpathian basin. 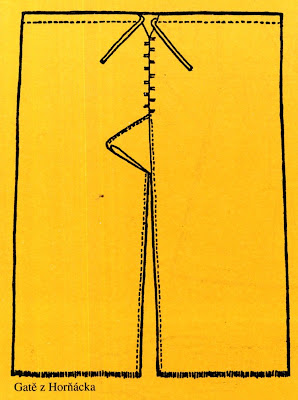 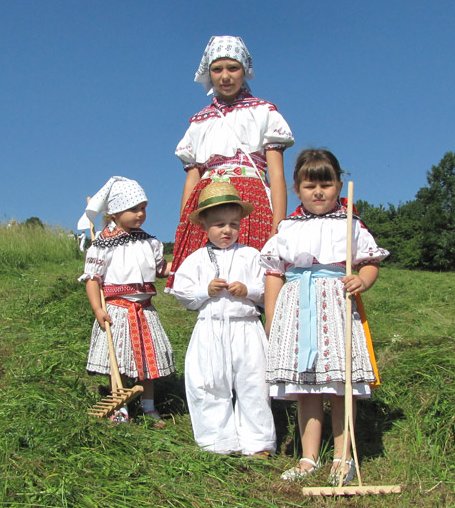 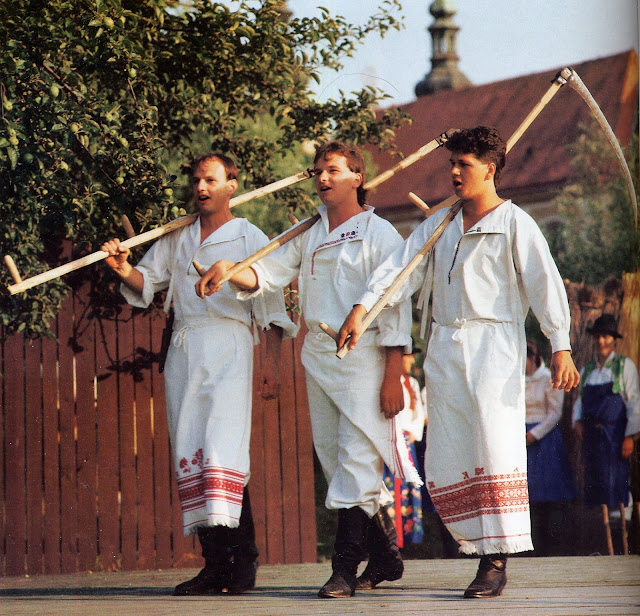 An apron with red woven and/or embroidered ornament is part of this outfit. This is a characteristic shared with Slovak and Hungarian mens' costumes. Here is a folklore group from this area posing with some Estonian women. 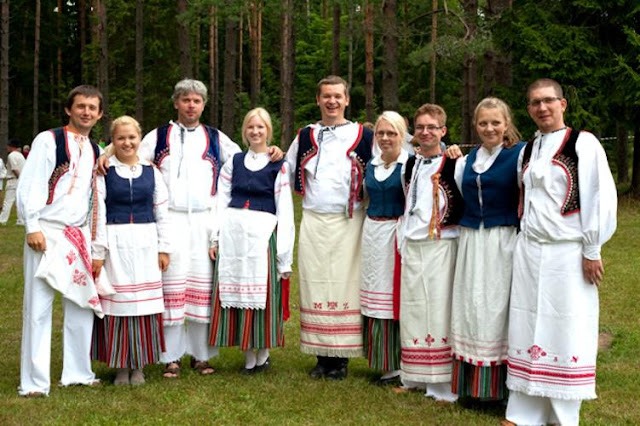 For festive and ceremonial dress, tighter-fitting blue pants are worn, which are embroidered on the front and around the pocket flap. The narrow belt which goes around the waist twice is also found in Slovakia. 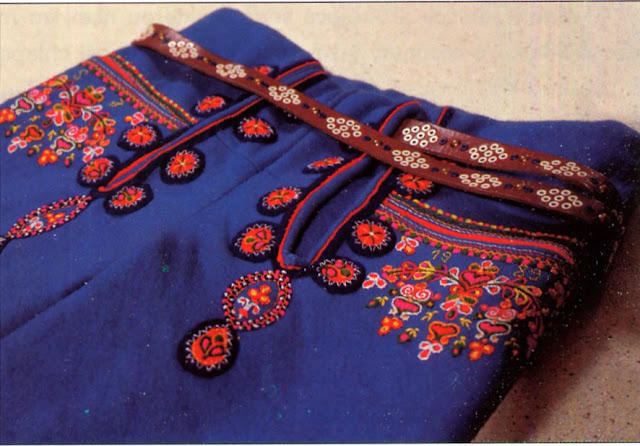 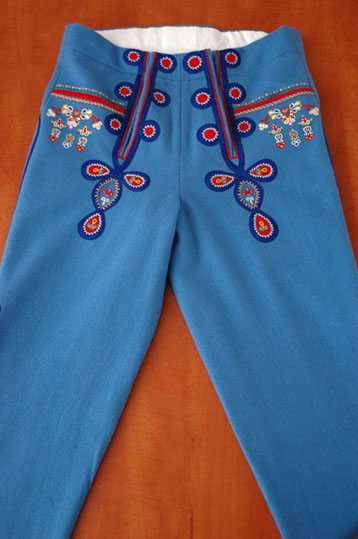 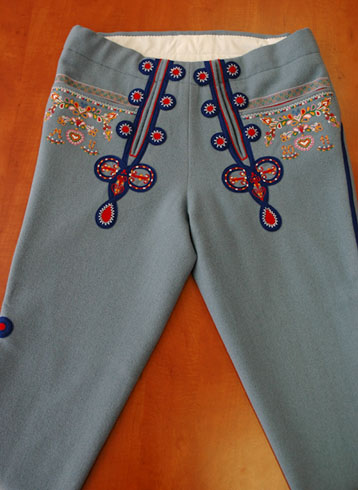 When dressing up, younger boys wear an embroidered kerchief tied around their waists. When they get bigger and start wearing the blue pants, the kerchief is folded and placed behind the front flap of the pants. 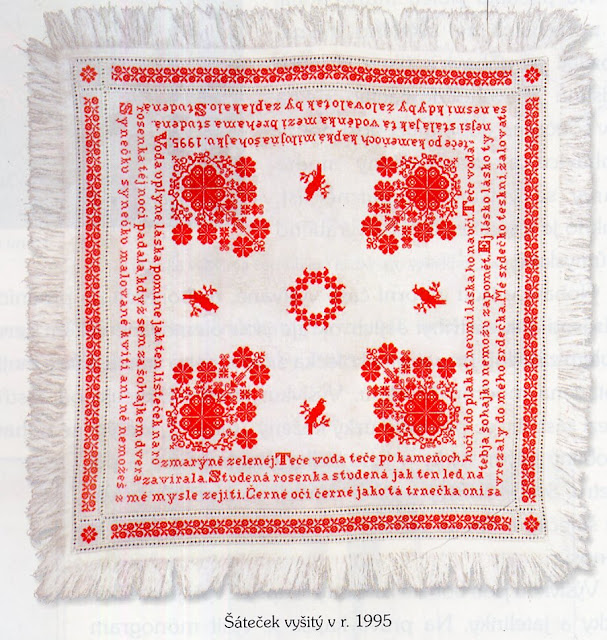 The kerchief is embroidered in red cross-stitch, typically including four corner designs, four birds, a wreath a border around the outside and the lyrics to a song. 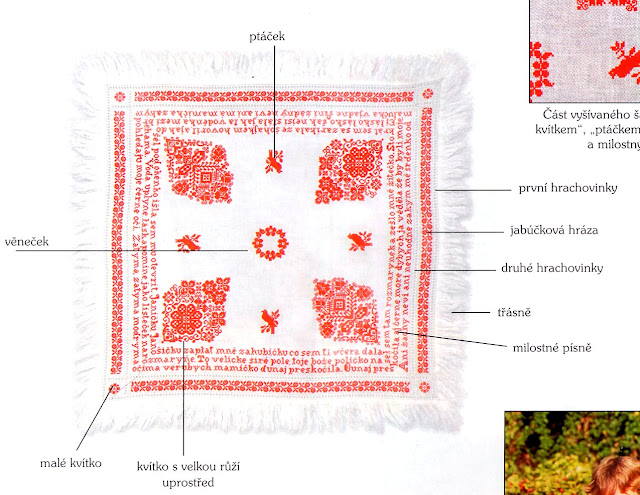 This is worn by single men. You will rarely see married or older men wearing it. Here is a baptismal photo showing the parents and godparents. 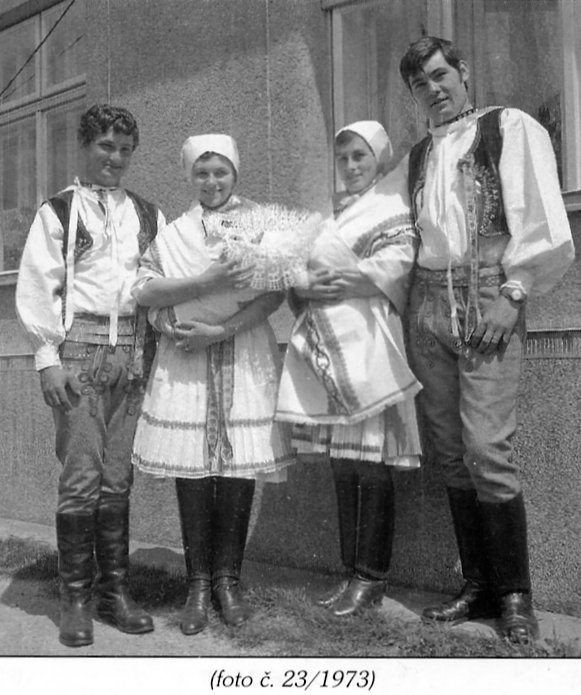 There are two types of vests worn by men. Younger men wear a vest with concave front edges in black or blue wool or damask with embroidered front edges and elaborately embroidered backs. 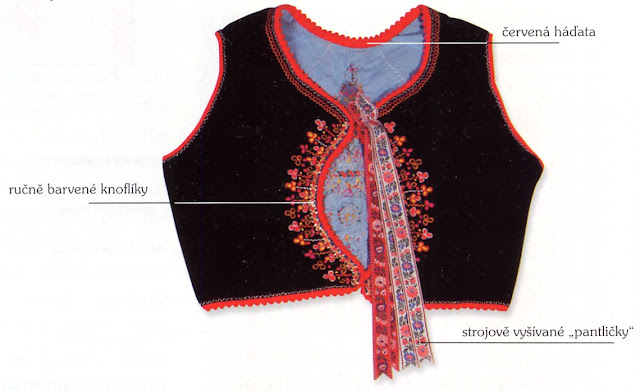 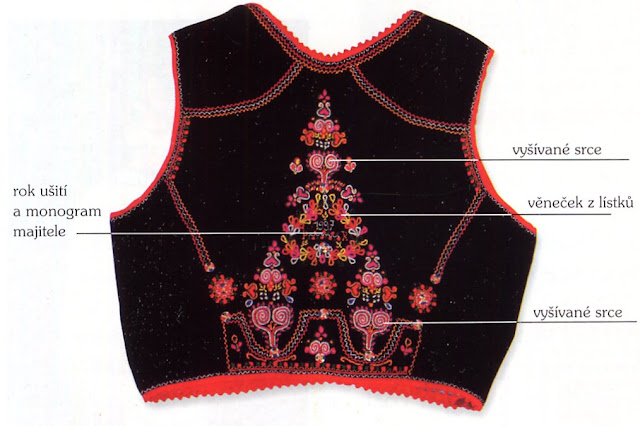 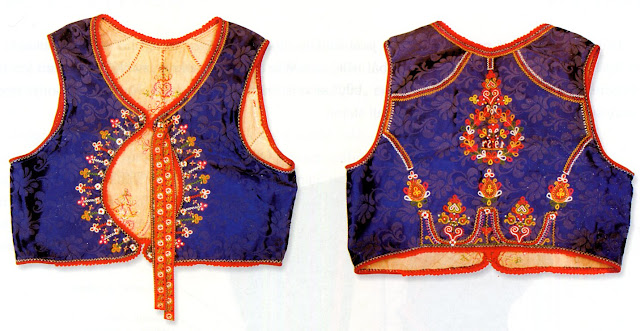 Sometimes the vests fit normally, but sometimes you see men wearing vests that are very small, as if they were made for them when 10 years old. This is relatively common in this general region for some reason. 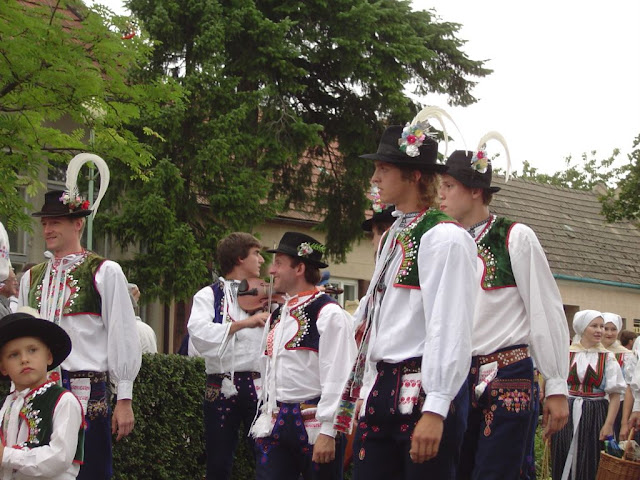 Older men wear a white wool vest with straight fronts which is also highly embroidered. Sometimes younger married will wear this as well, especially for important occasions. If you look closely, both the groom and the older gentleman are wearing this vest. 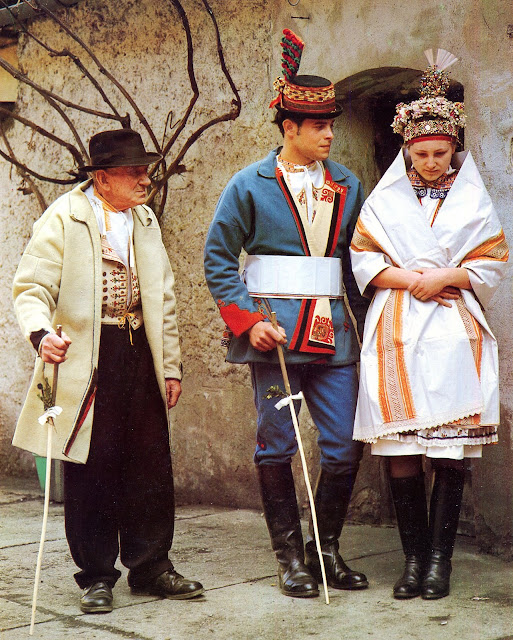 An open fronted jacket of either blue or white wool called Kabat is worn on festive occasions. 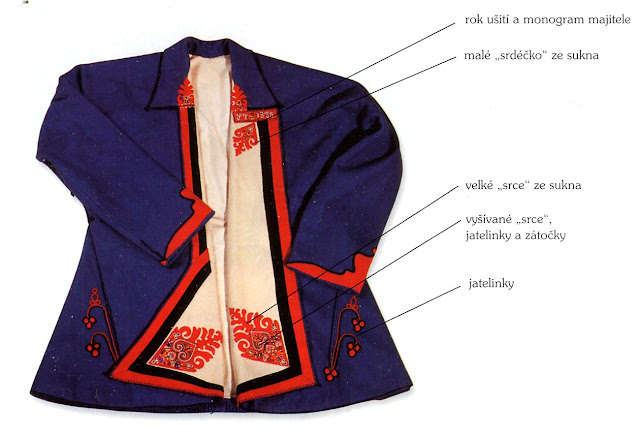 The outfit is completed by high boots and a hat with rows of ribbon and multicolored cord. This normally has white rooster tail feathers tucked into it. 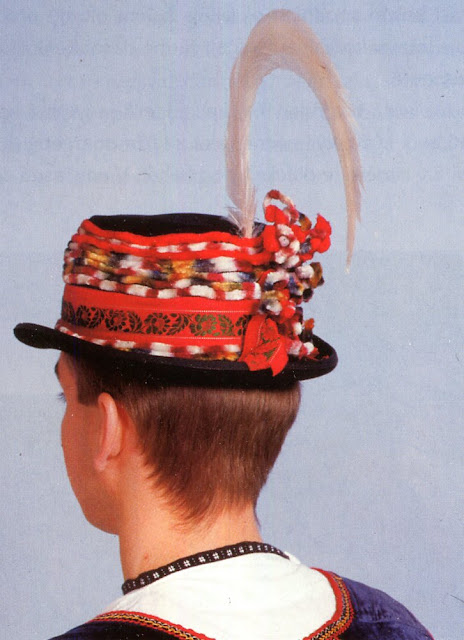 At his wedding the groom wears a special ornament attached to his hat. He also wears a woman's head cloth, the longer type worn 'with corners down' around his waist with the embroidered ends hanging in back over his jacket. 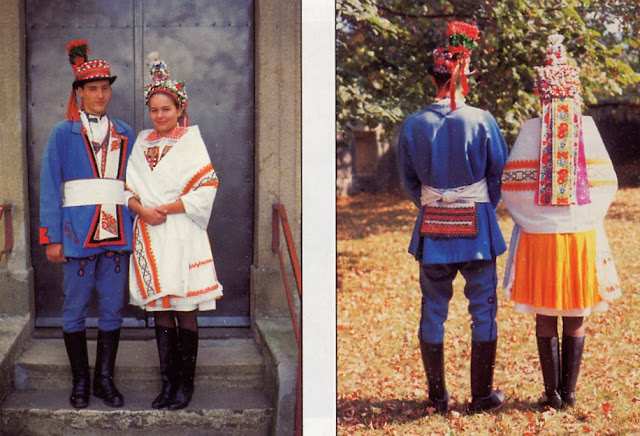 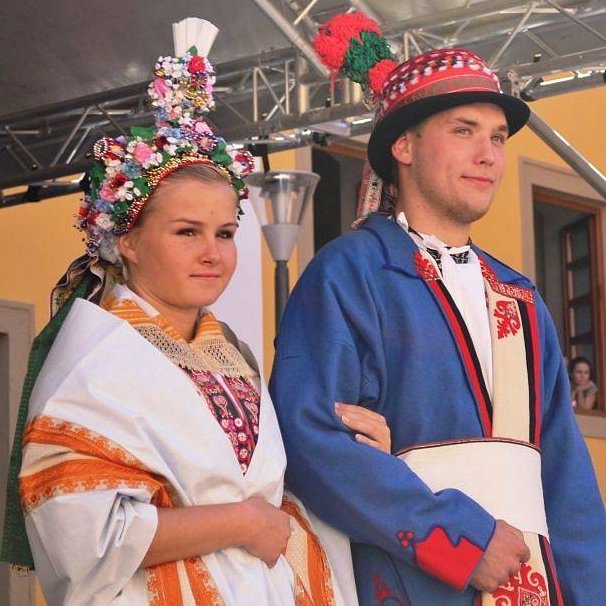 Sheepskin caps are worn in cold weather, as in most of Eastern Europe.
Various types of overcoats are worn at need. One of them resembles the Lemko Chuhania or Hungarian Szur. In this region it is called Halena. Unusually, sometimes the arms are inserted into the sleeves. 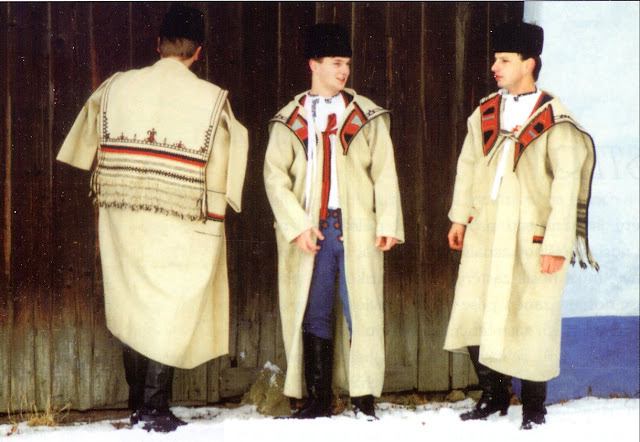 I will close with just a few more images. 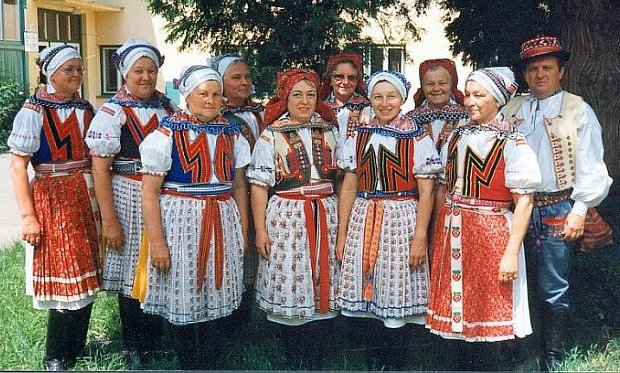 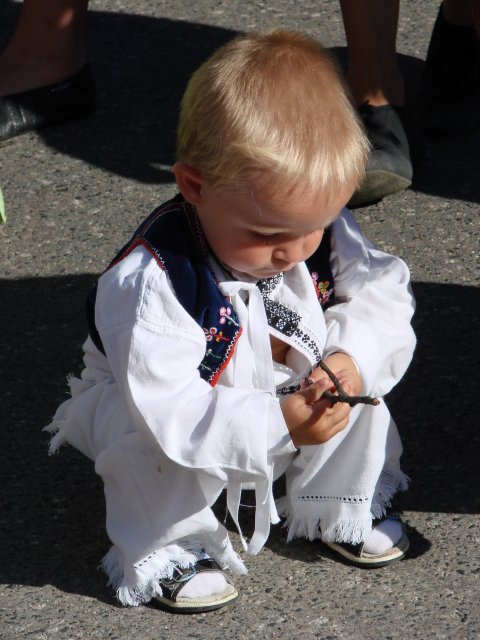 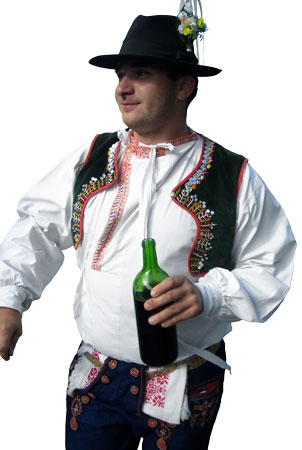 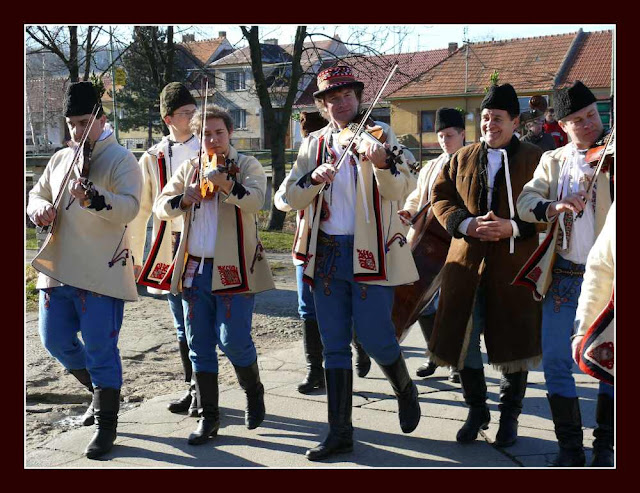 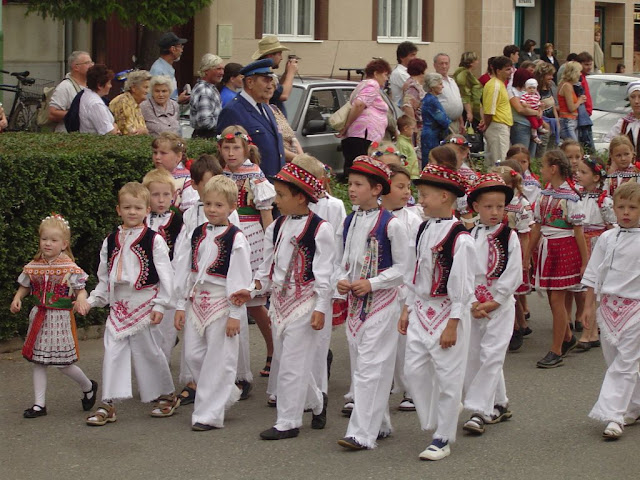 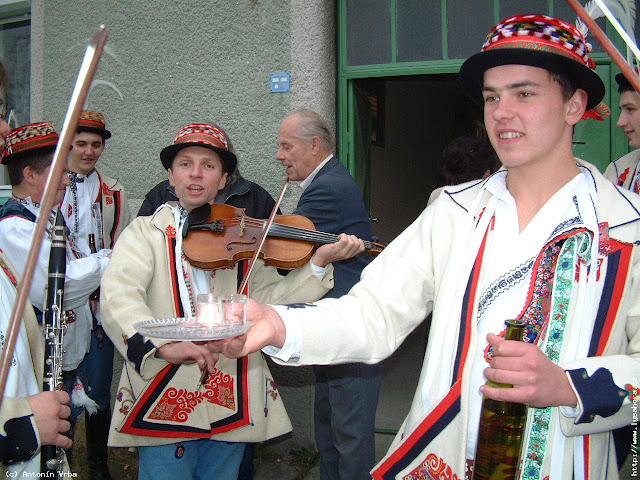 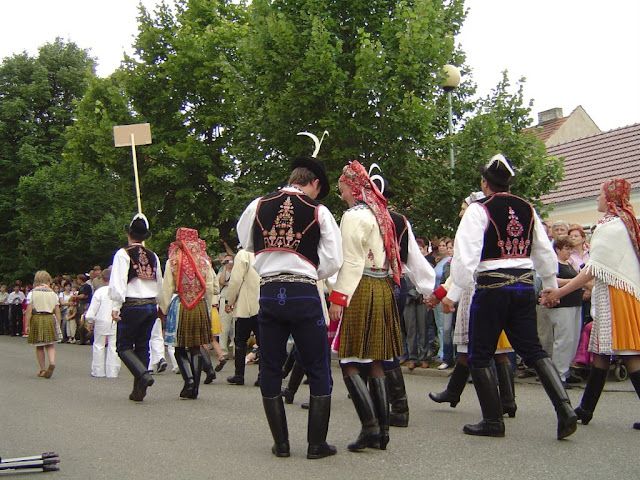 A couple dance from this region. This seems to be midway between Goral dance and Csardas.
https://www.youtube.com/watch?v=Oi-R--oSS8c&NR=1&feature=endscreen

Another couple dance by the same group. In this one the girls are all wearing the everyday version of the back apron. They are also wearing knee socks and kiepce [moccasins], instead of boots.
https://www.youtube.com/watch?v=CiX_6Ucs5ys