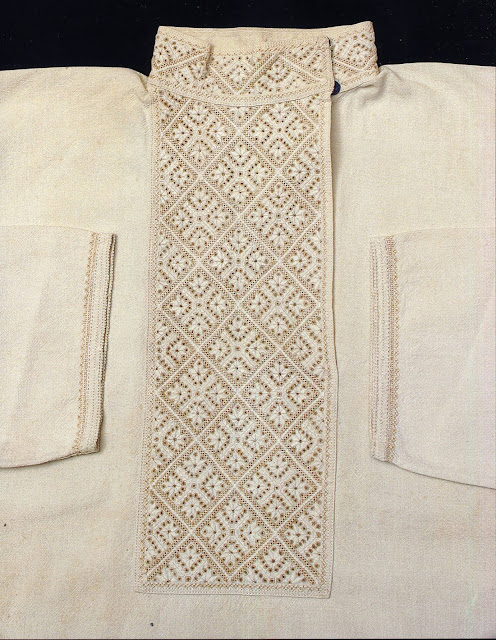 Hello all,
Today I will talk about another tradition of whitework in Ukraine, around Vinnytsia in Eastern Podillia. Here you can see a man's shirt embroidered in this technique.  As in Sniatyn, the main feature of this embroidery are the eyelets, 'nightingale eyes'. The distinction is that in this region the eyelets are always square, and even when they form groups, they never share stiches. This gives them a distinctive look, quite different from the work of Sniatyn. 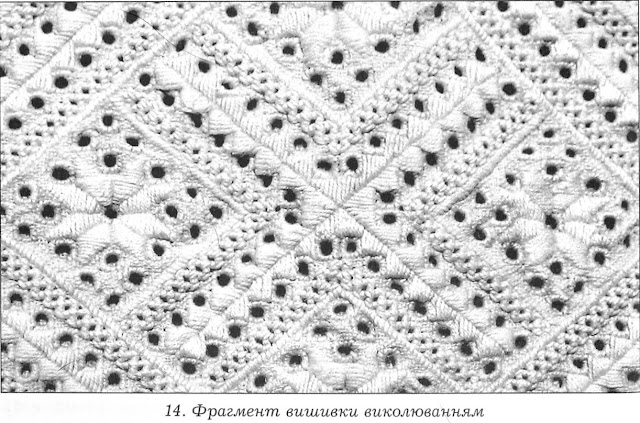 As in most whitework, a combination of stitches is used, faggot stitch, reverse faggot stitch, counted satin stitch, hemstitch and others. On men's shirts these were used on the front placket, cuffs and collars. 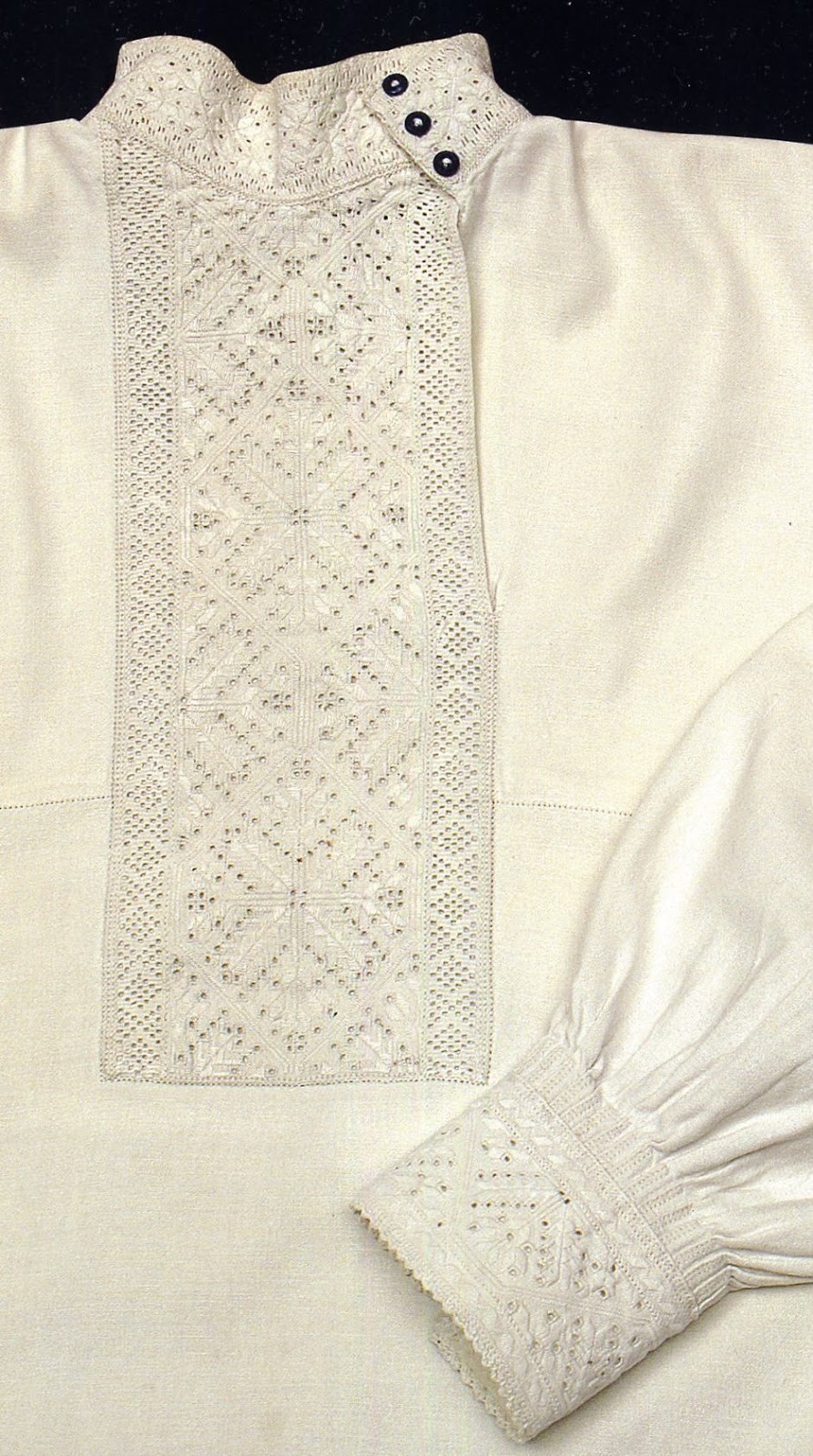 These make for very elegant designs. 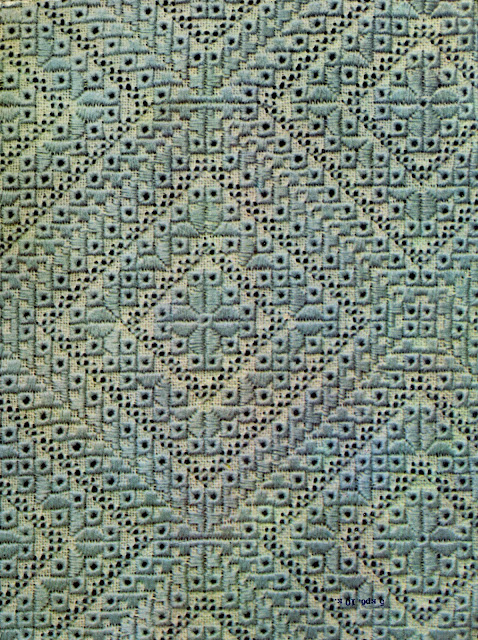 Here you can see the overall cut of the man's shirt. 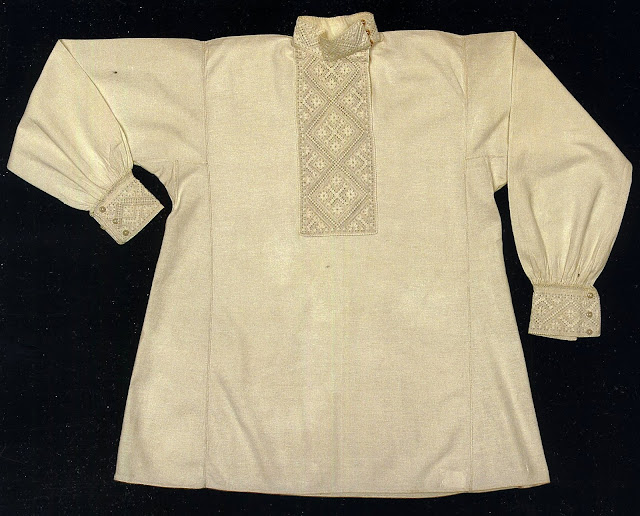 Usually the composition is based on diamonds, some larger, some smaller. As in Sniatyn, different subtle shades may be used. Yellow is often added. This collar and cuff feature a surface stitch which in Ukrainian is called Verkhoplut. 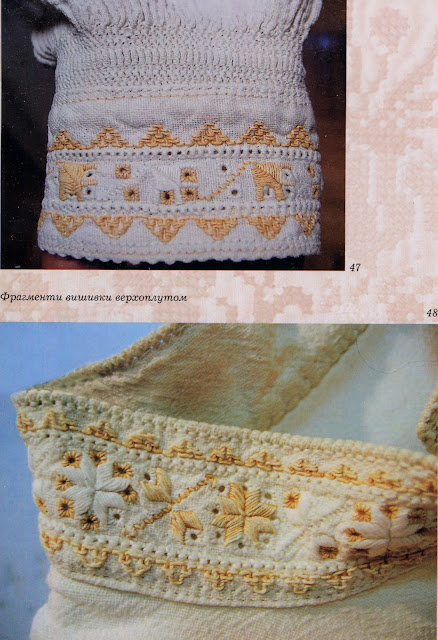 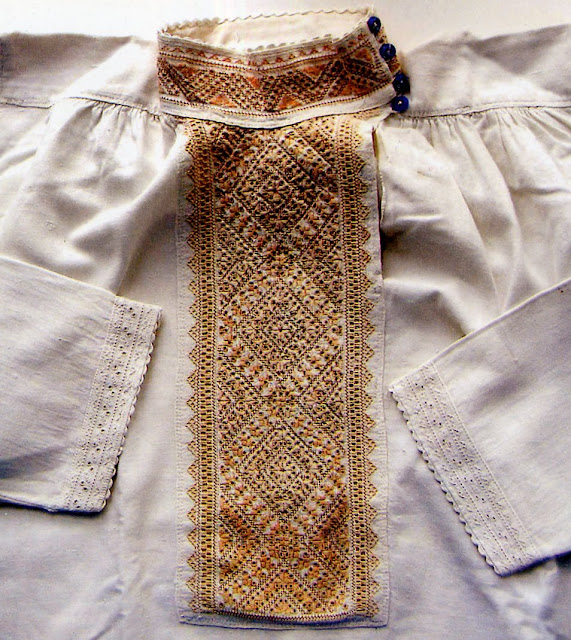 Women's chemises were also embroidered using this technique. Here is a shoulder inset from one such chemise. 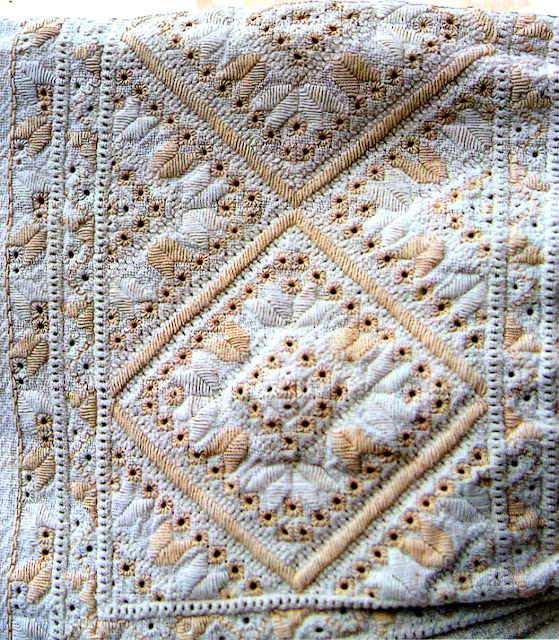 Here is an example of a chemise made with the sleeves and shoulder parts cut out of a single piece of cloth. 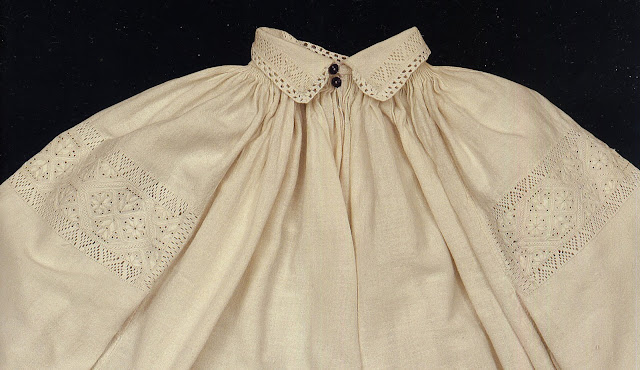 Another chemise with much yellow in the embroidery and scattered motifs down the sleeve. 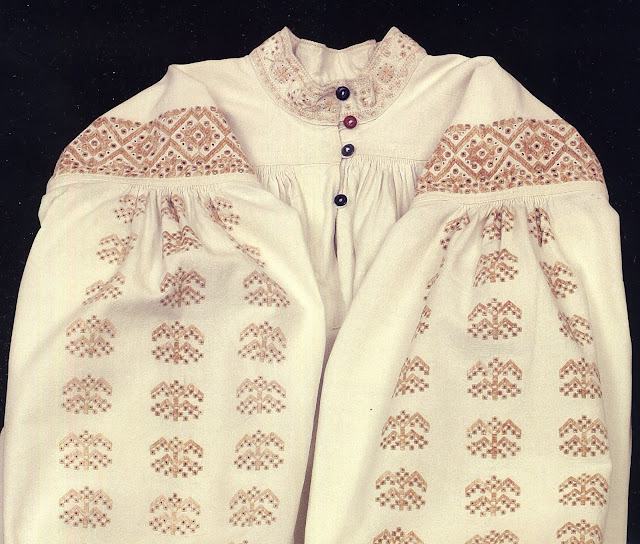 Some of these are made with an unusual cut, A rectangular yoke, called koketka forms the top of the chemise from shoulder to shoulder, with a circle cut out for the neck opening.

These not only have a wide band of embroidery across the end at the shoulder, but often a narrow band the length of the yoke from side to side. 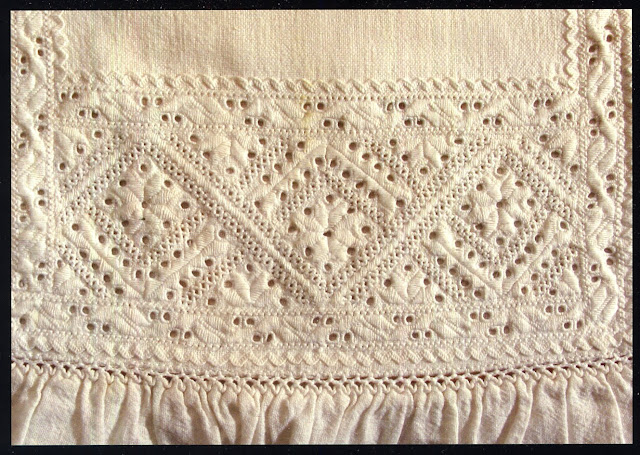 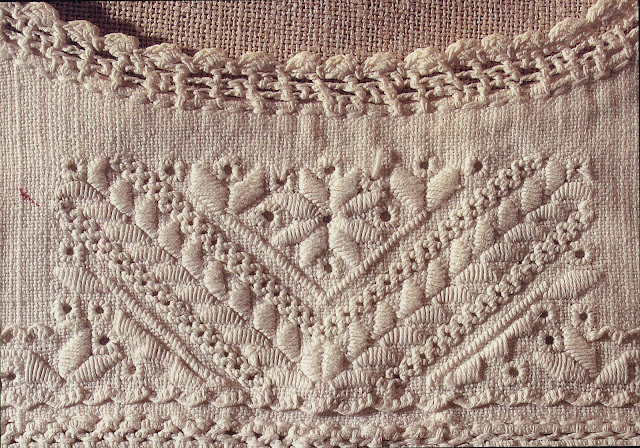 A darker color may be added, as in this man's shirt. 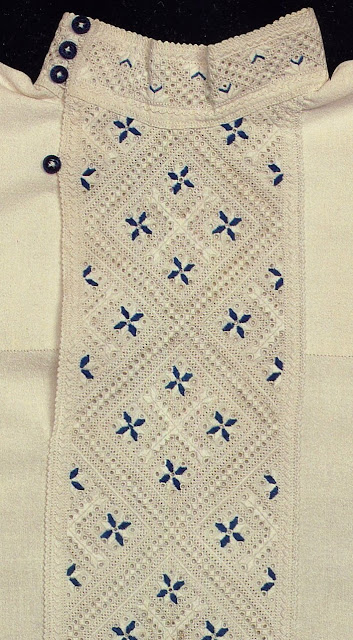 Or this yoke of a woman's chemise. 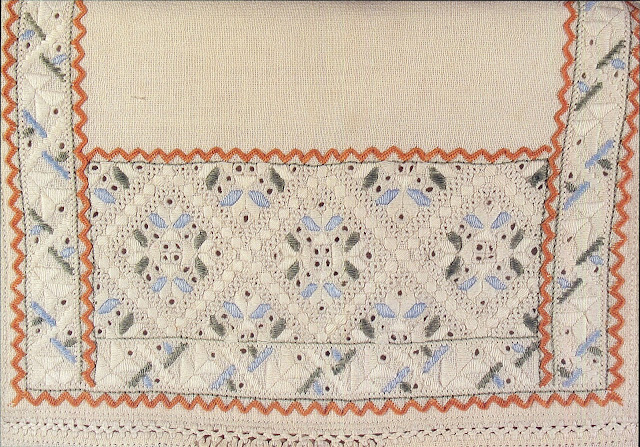 Perhaps the most unusual variant is adding beads of various colors as accents. 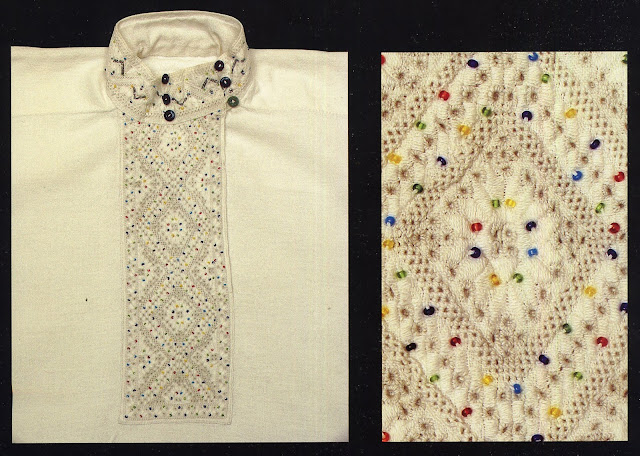 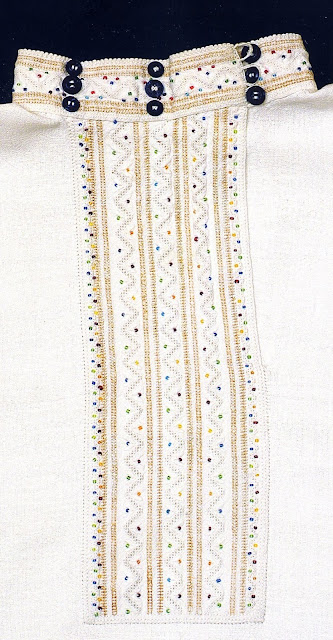 This is found on men's shirts as well as on women's chemises. 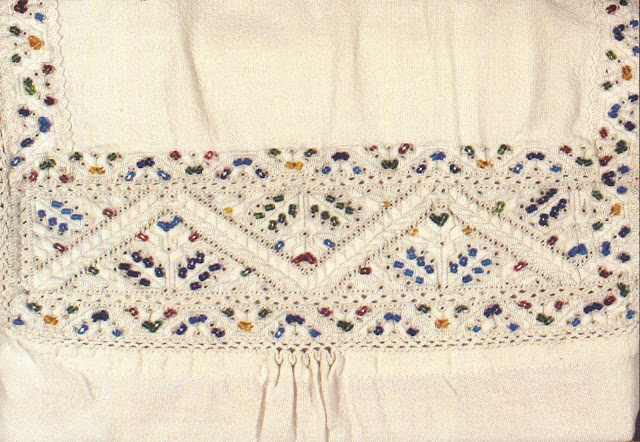 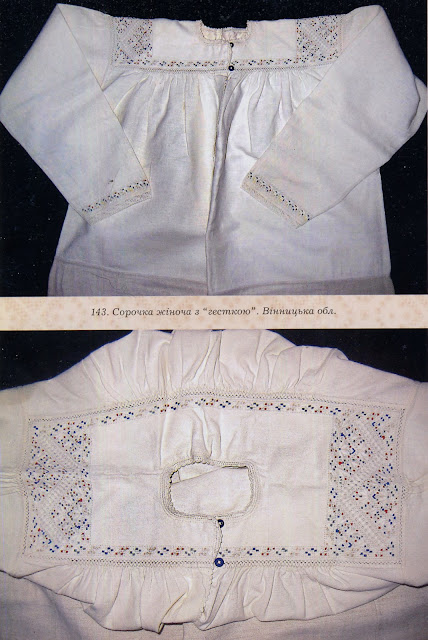 One of my readers in Ukraine wrote in to share a couple of photos which she took of this type of embroidery. She goes by the name of 'Mawka Lisova'. 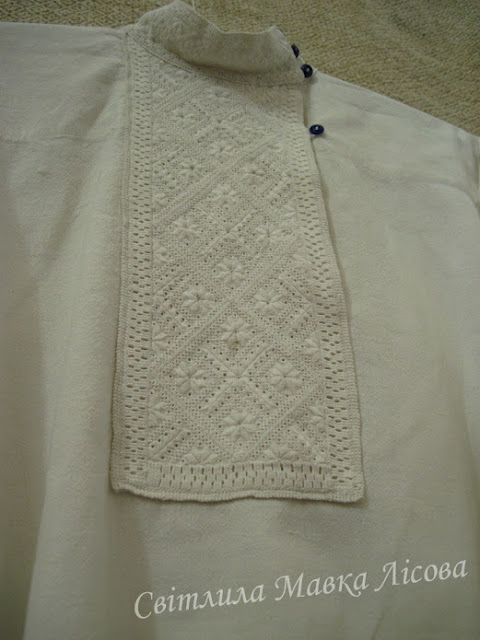 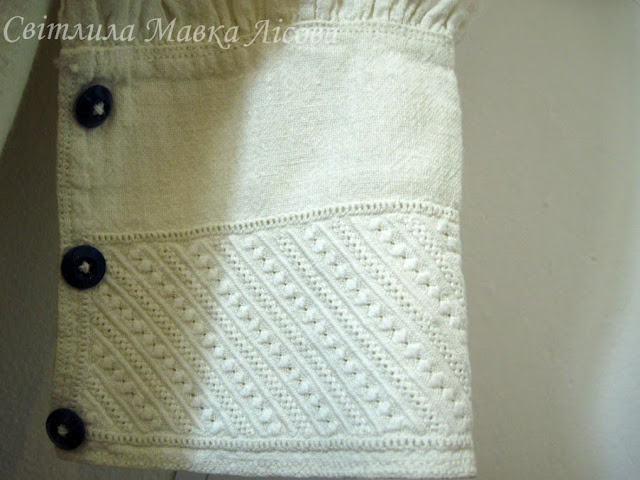 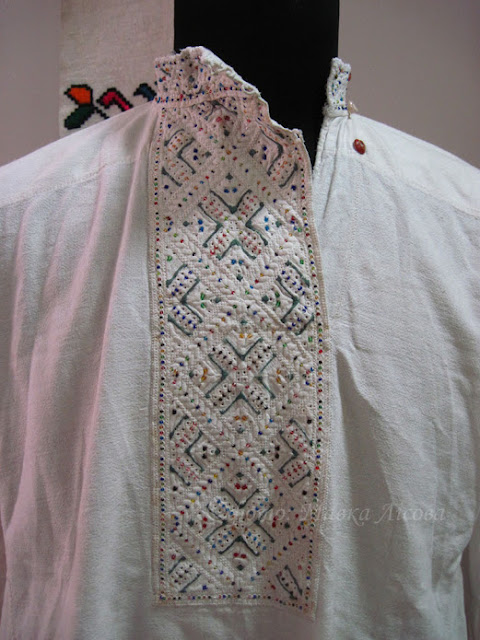 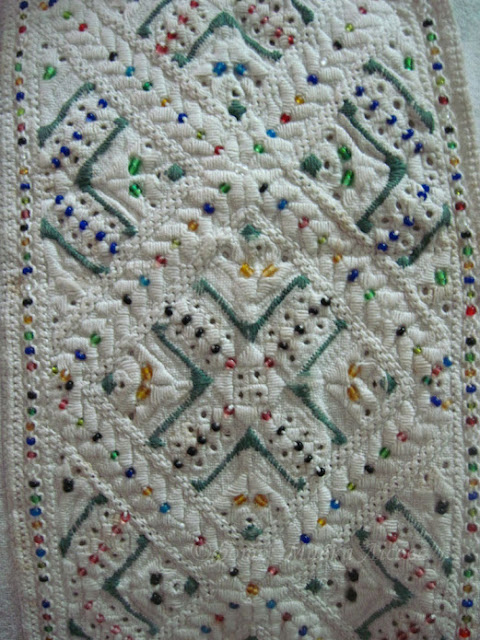 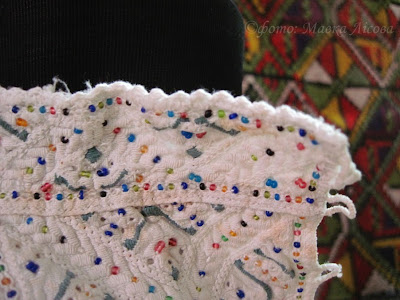 This is not the only kind of embroidery found in this area, and eyelet embroidery is also found in other parts of Ukraine as well.
Thank you for reading, I hope that you have found this interesting and inspiring. This kind of embroidery could be used for many different projects of your own. I will close with some closeups. 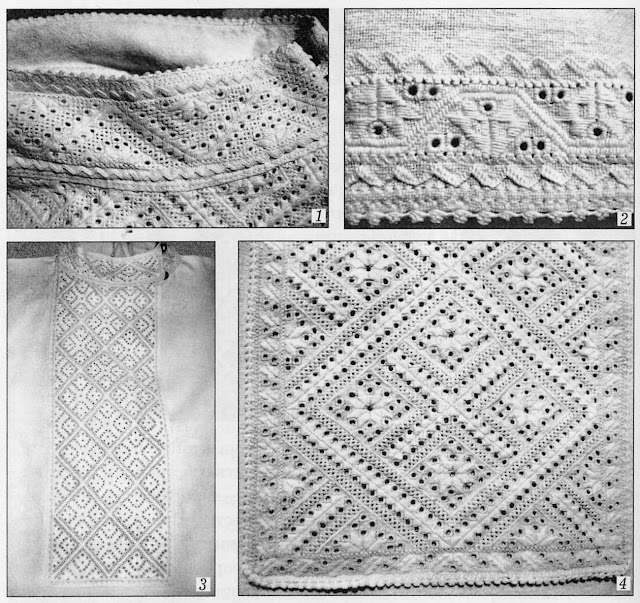