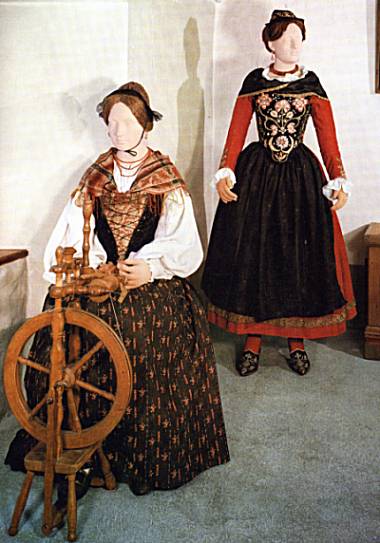 Hello all,
Continuing my series of articles on the minority peoples of Europe, today I am going to do an overview of the folk costumes of the Rhaetian Peoples. The Rhaetio-Romance languages were spoken throughout the southeastern Alps in the middle ages. Since then the various dialects have been in retreat from German in the north, and Italian [Venetian and Lombard] from the south. Today the extant dialects are generally grouped into three languages, Romansh in Switzerland, Ladin and Friuli in Northeastern Italy. Here is a map showing the current extent of these languages. I will do an article on each of these three. 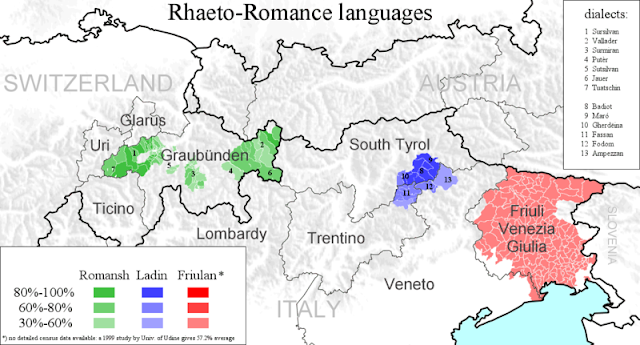 Throughout this region, places tend to have at least three names, in Italian, in German, and in the local dialect. I will try to provide all three, I hope it will not get tiresome.
The costumes of the three peoples do not have much in common. 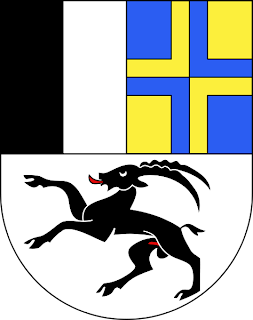 This is one of the four National Languages in Switzerland, but currently is only spoken in the canton of Graubünden [German], Grisons [French], Grigioni [Italian], or Grischun [Romansh].
It was formerly spoken over a much wider area, as far as Lake Constance in the north, and was spoken in Vinschgau in South Tyrol until the 17th cent.
As is the case with many minority languages, several distinct dialects are spoken, a Literary standard exists, but is not popular, the people who speak Romansh tend to be devoted the the speech of their particular area, again, as is typical for speakers of minority languages. Here is a map of the current distribution of native languages in Grischun.
For those who are interested, here is an article on the Romansh language in Romansh.
http://rm.wikipedia.org/wiki/Rumantsch_dal_Grischun 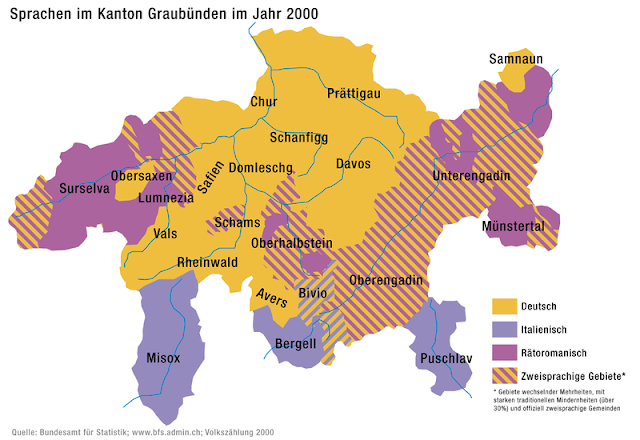 As you can see, the various dialects are no longer contiguous.
The costume of Grisons is quite similar over the entire area, with minor variations. The only exceptions are the costumes of the Italian speaking areas in the south. There is no sharp distinction between the costumes of the German [Allemanic] speaking areas and the Romansh speaking areas, as formerly the entire area spoke Romansh. Elaborate graceful embroidery is worked on the apron, shoulder shawl, and often the plastron over the entire region. Jackets are smock-gathered on the upper sleeve. These are known as Spencers and are common throughout the Alpine region.

Surselva is the region around the headwaters of the Rhine River and forms the largest remaining Romansh speaking community. 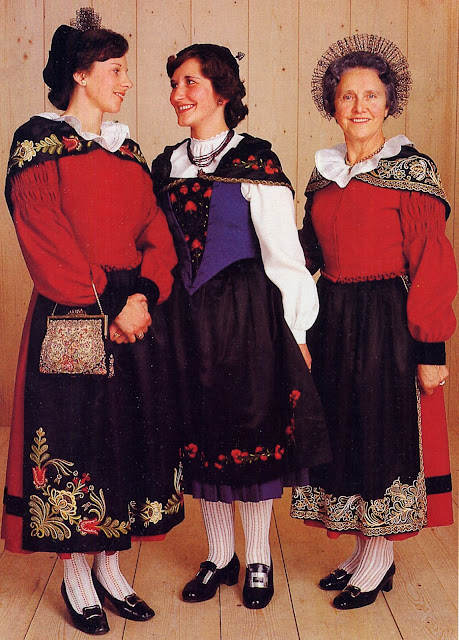 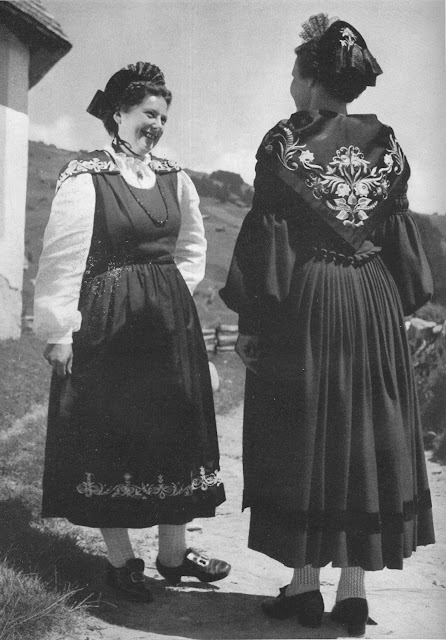 Schams / Val Schons is an island of Romansh surrounded mostly by Allemanic speakers. The tiny bridal crown is supplemented with myrtle leaves, and is also found in other parts of the Canton. 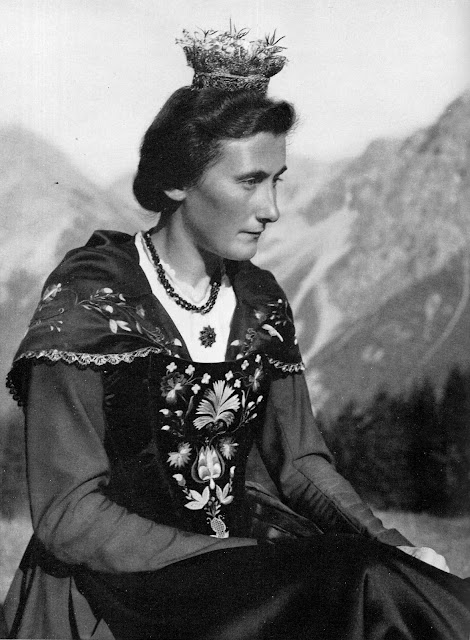 The costume of Herrshaft / Signuradi, on the lower reaches of the Rhine, downstream from Chur / Cuira. This and the following regions have only a small percentage of Romansh speakers. 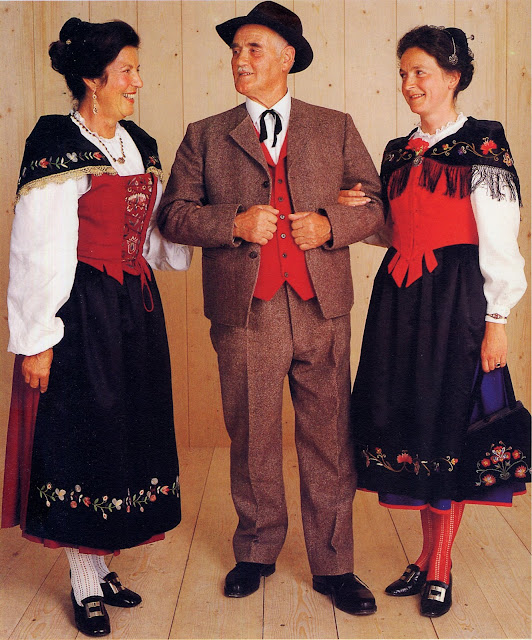 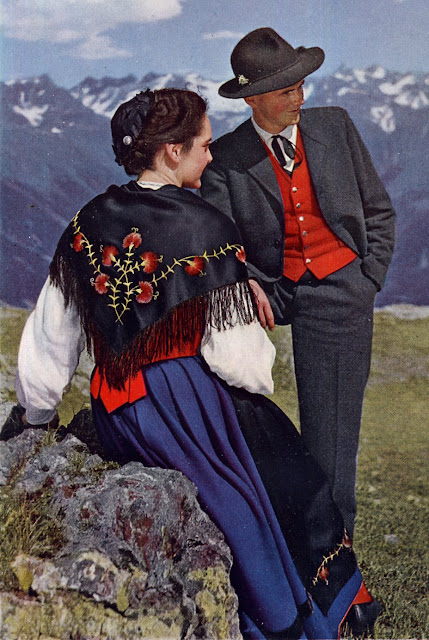 Albulatal /  Val d'Alvra costume on the seated woman. This is found between the Davos and Oberhalbstein regions on the map above. The standing figures are wearing the costume of the neighboring Oberhalbstein / Surses valley. This has a larger proportion of Romansh speakers. 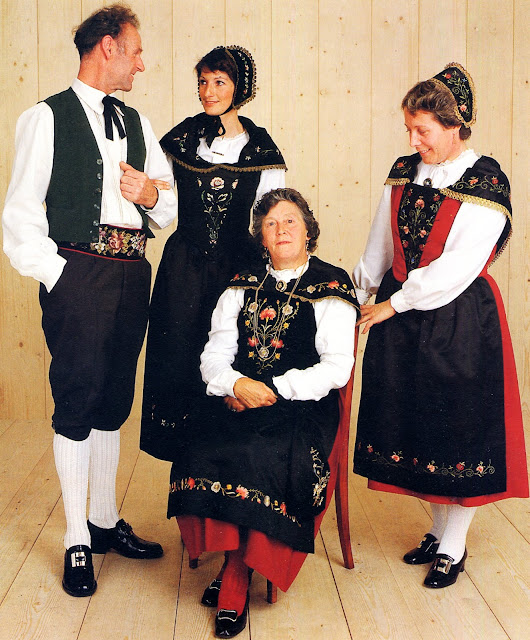 A couple closeups of the embroidered cap, [biretta] of Oberhalbstein / Surses. This is typical of the satin-stitch embroidery of the Canton. 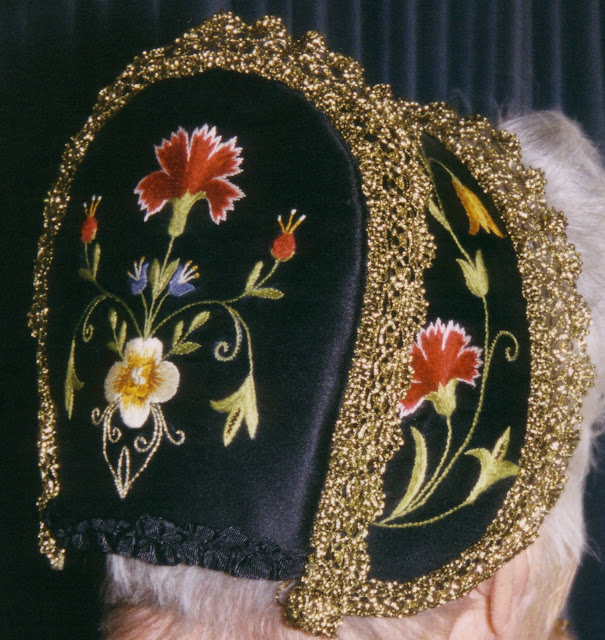 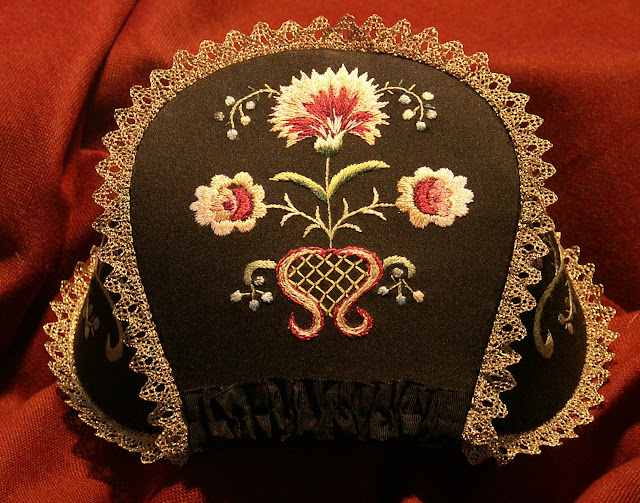 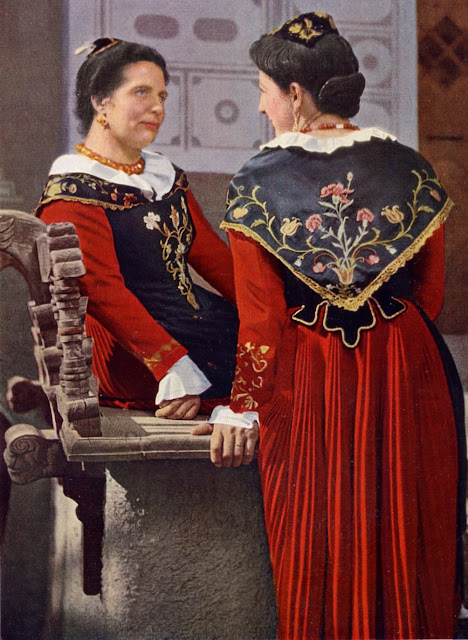 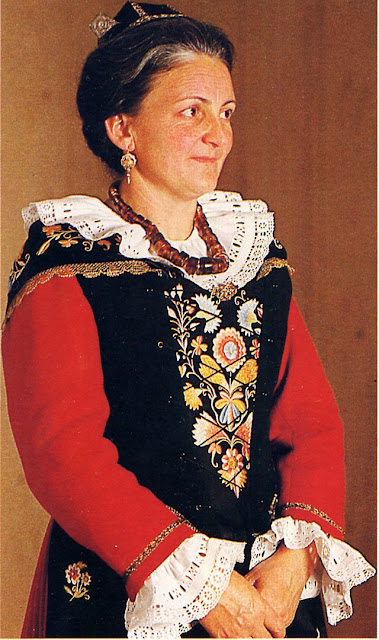 The Lower Engadine costume has more black than red. This is an older widow, who has completely done away with the embroidery.

Some examples of the shawl embroidery on the upper Engadin Costume. 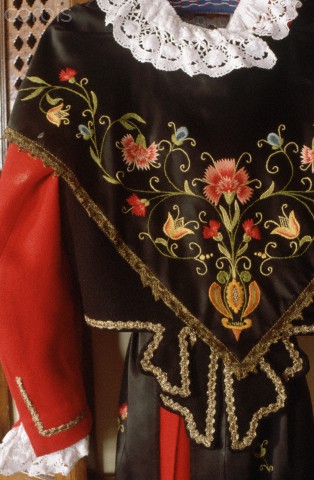 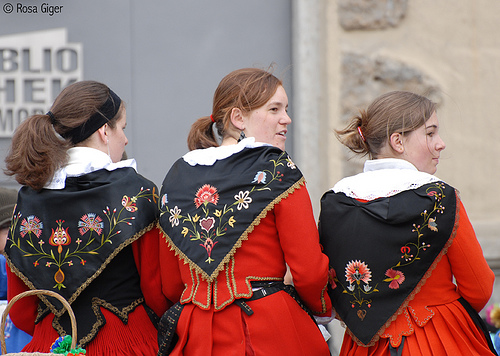 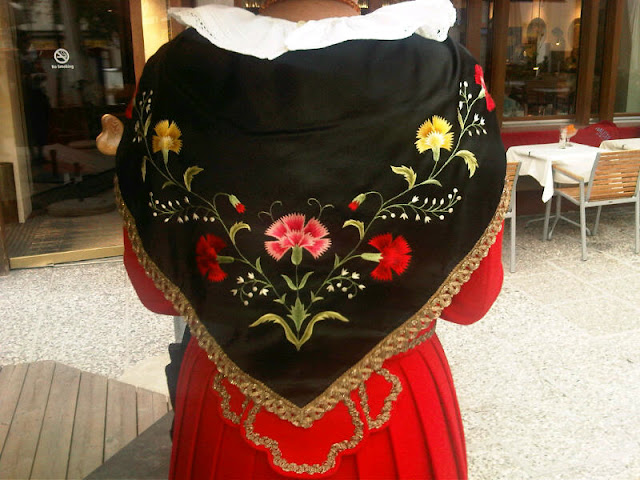 A dance group from  the upper Engadin. 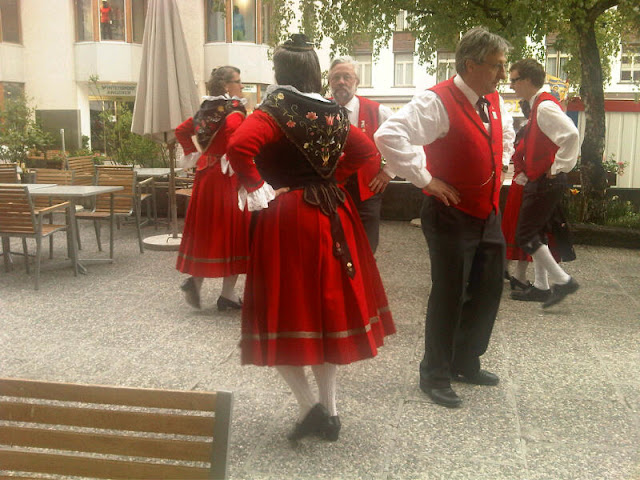 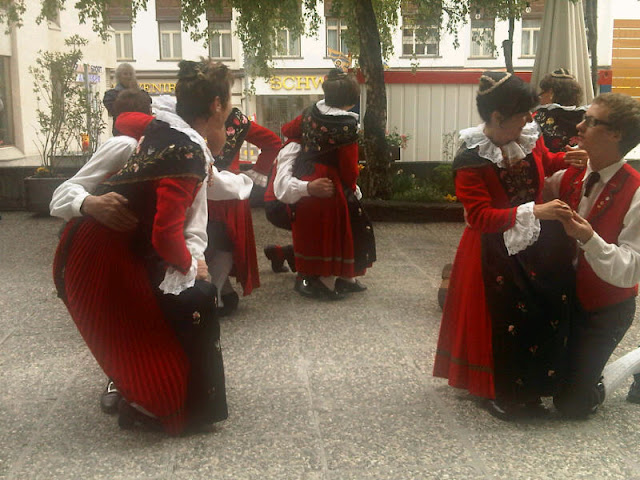 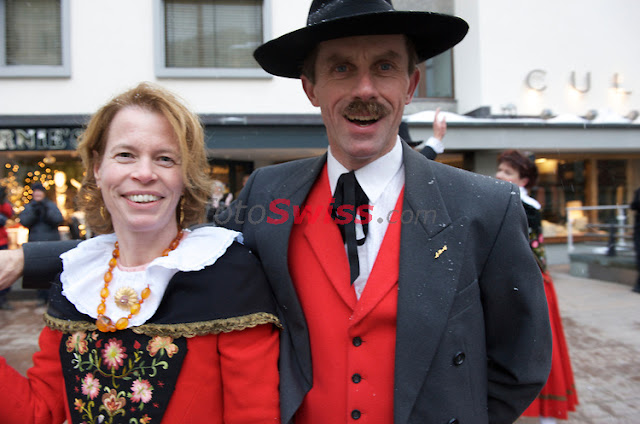 There is one more costume which is a fairly recent innovation, a simplified everyday going-out costume which is meant to represent the Canton as a whole. The linen version of the apron features the cross-stitch embroidery which is a strong tradition on household linens in this region. It may be done in black, blue, red, or a combination of red/blue or red/black. 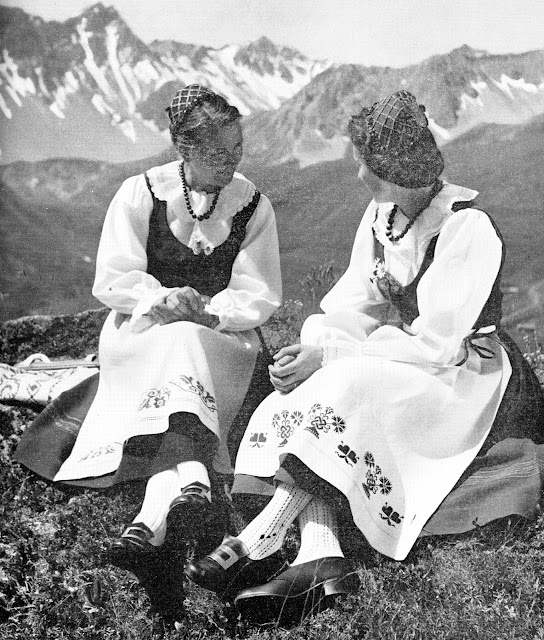 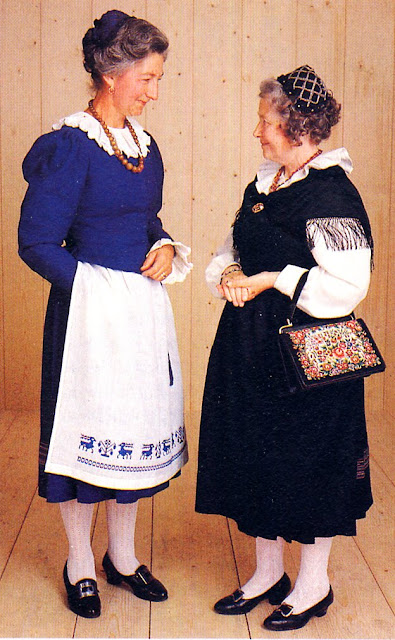 A couple of prints of Grischun Costumes. 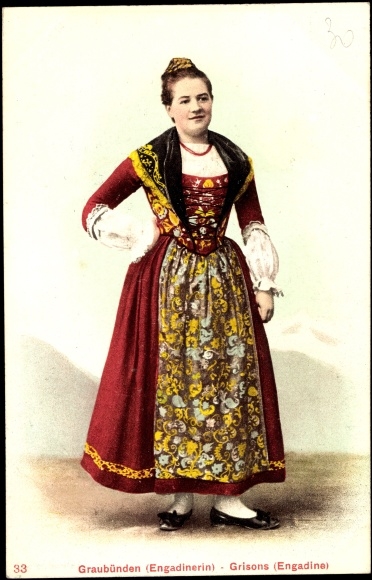 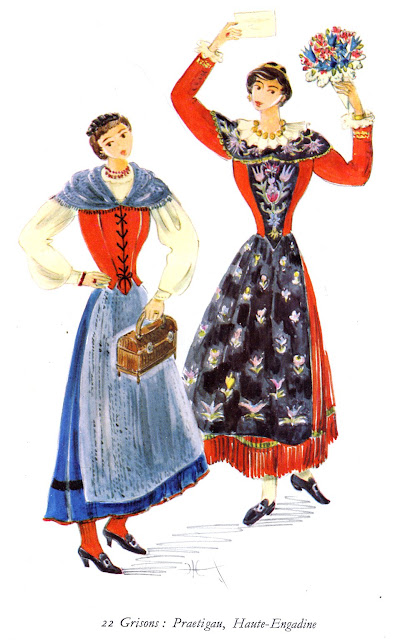 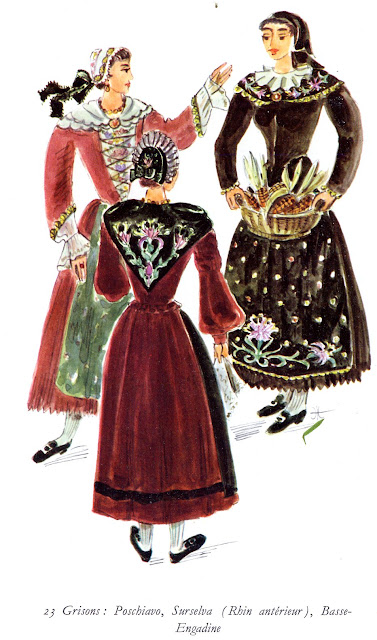 A video in Romansh explaining the Engadin Costume, The cameraman has the unfortunate habit of excessive closeups that hide more than they show, and I don't know why the opening sequence is so dark, but still worth watching.
https://www.youtube.com/watch?v=15LCsWGN_e0

Chalandamarz is a tradition in Graubunden, especially the Romansh speaking areas. Boys in blue smocks and red stocking caps process through the towns, each carrying the largest cowbell he can carry, to chase out winter. Here is a documentary about this in Romansh.
https://www.youtube.com/watch?v=oLbDpSCjWEI


Thank you for reading, I hope that you have found this interesting and inspiring. The embroidery of this costume could be adapted for any number of interesting projects of your own around the house.