Hello all,
today I will talk about another Ukrainian embroidery tradition, used on rushnyky of the southern part of East Podillia. A rushnyk is a ritual cloth used in the celebration of Baptisms, Funerals, and especially Weddings. They are also used to honor ikons in the house and often in Church as well. They are not unique to Ukraine, they are also used by Russians, Karelians, Bielorussians, Romanians, Moldovans, Bulgarians, Slovaks, Sorbs and other east European peoples under several names. They consist of one loom width of cloth 3 m long or so, highly decorated at both ends with woven or embroidered ornament. The length varies quite a bit, depending on the intended use. These are sometimes translated as 'towels', but to call them that loses the ritual importance which they have in Eastern Europe.
This particular method of embroidery is called in Ukrainian 'kachalochka' and consists of squares or rows of embroidery executed in counted satin stitch, accompanied by Holbein or outline stitch. It is executed in many colors. 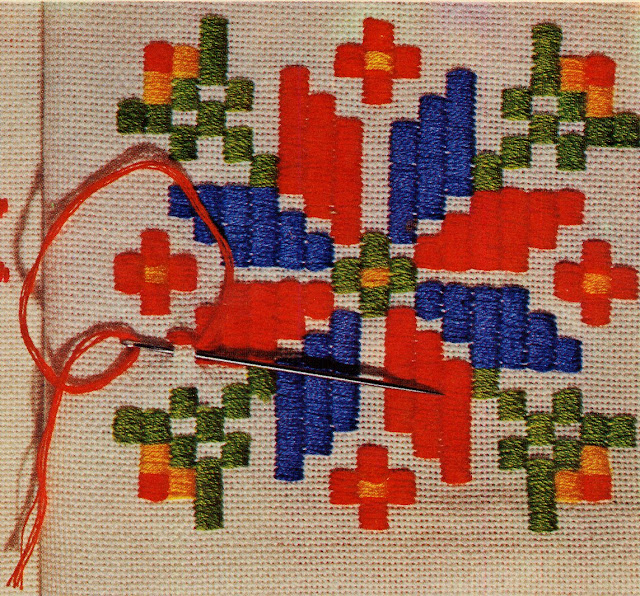 This technique results in motifs which form a large grid with square pixels, similar to cross stitch, but larger, and with a very different texture.
This type of embroidery was very popular in the middle ages, and examples of this stitch may be found as far away as Iceland.
In Ukraine it forms a distinct style of embroidery which was originally found only in a narrow strip perhaps 20 miles wide along the Dnister, in southern Vinnytsia and northern Odessa oblasts, the southeast edge of the region of Podillia. I suspect it may also be found on the other side of the river in Moldova. This embroidery is never used on clothing, only on rushnyky, handkerchiefs and house linens. This type of embroidery is now done over a wider region of Ukraine because of its beauty and uniqueness.

The example above shows all the stitches going in the same direction, but this is not always the case. Often the stitches run in both directions. 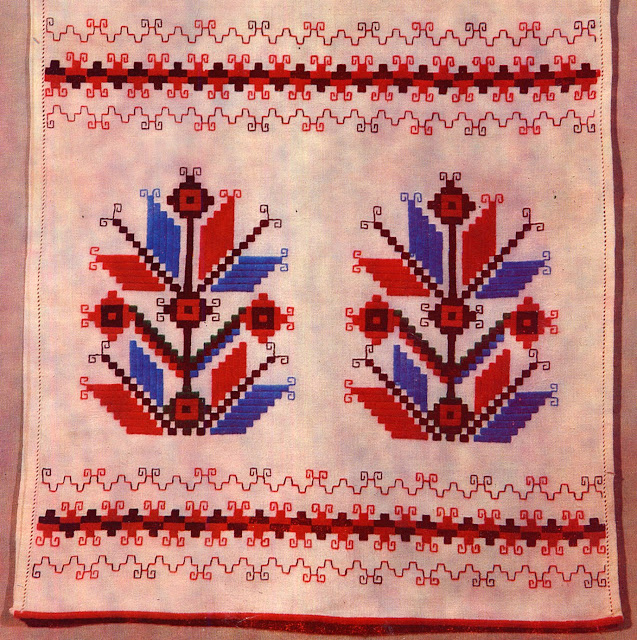 Usually the motifs are accompanied by an outline or secondary motifs in Holbein or outline stitch, often in two colors, black on the first journey and red on the return, for example.

The motifs are overwhelmingly geometric, but a small number feature human and/or animal figures. These examples are given disproportionate coverage in publications. One example is the woman with peacocks shown in the first image. Here is another. 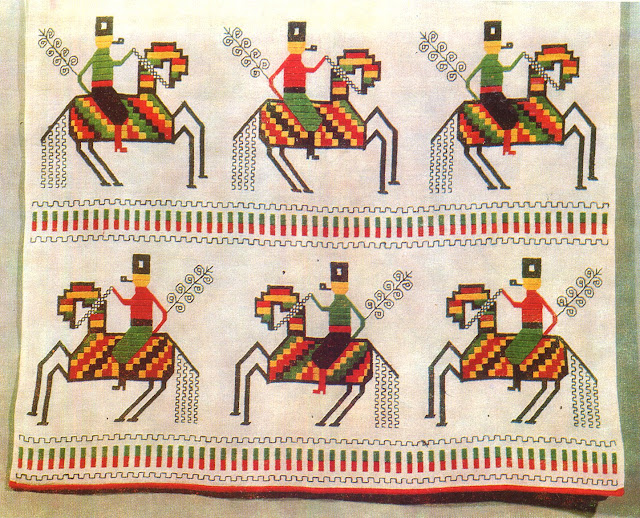 Sometimes motifs are made with angled edges, instead of just square ones. 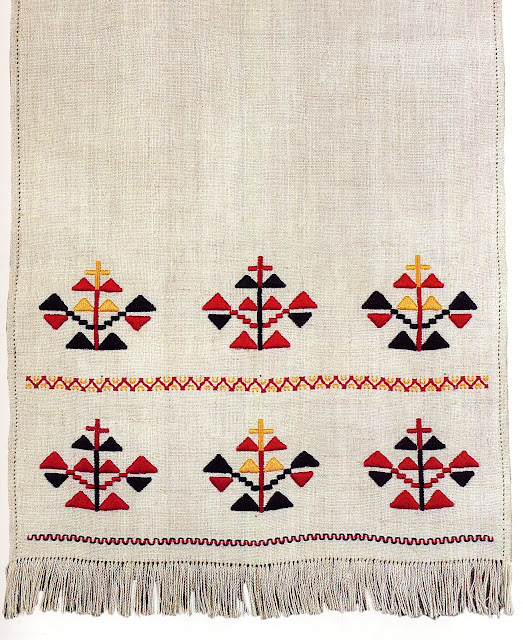 The Holbein or outline stitch may sometimes give up its secondary role to become a major part of the embroidery, like this example from around Balta in Odessa Oblast.

And occasionally the embroidery is made completely of outline stitch. This is found in many other places in Europe and Asia as well.


The number of colors used varies from two to a dozen or more.

The compositions used form an amazing and very imaginative variety. 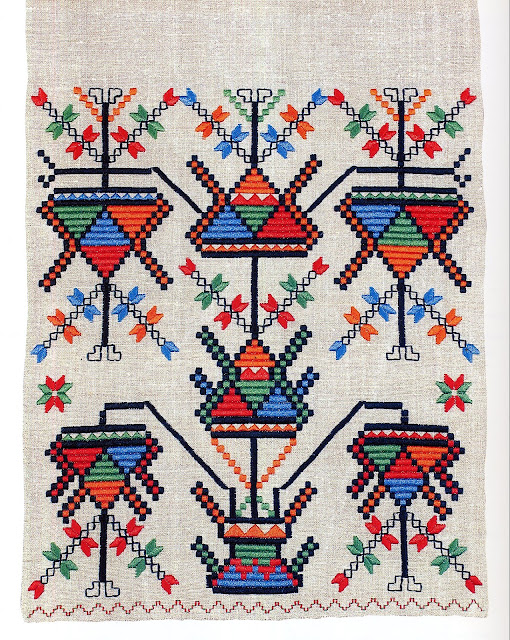 Some of the motifs are asymmetrical, and resemble those of the Balkans. 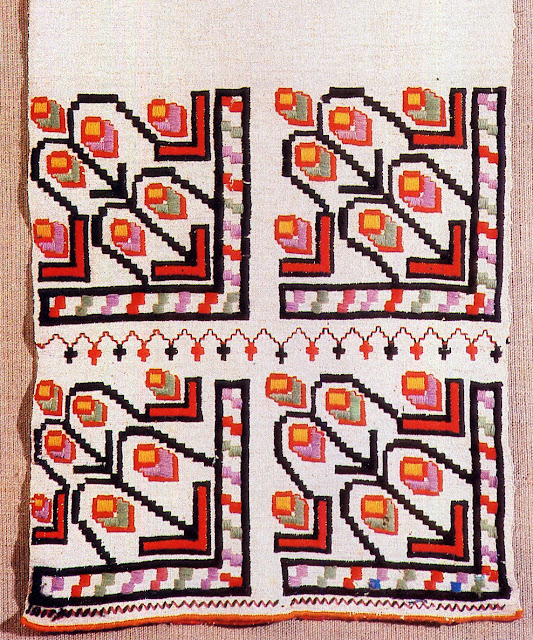 Motifs may be outlined to give greater clarity and emphasis. 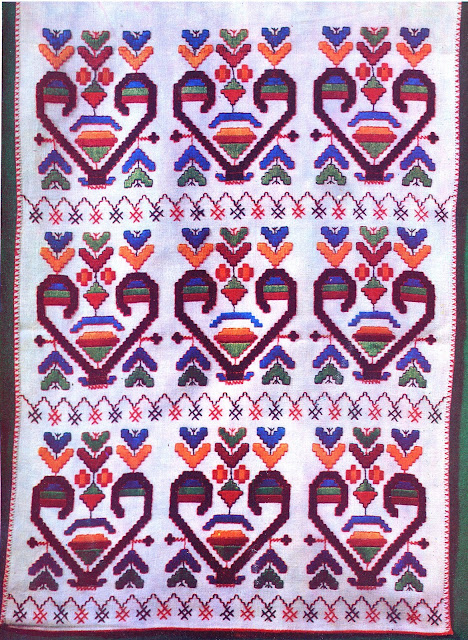 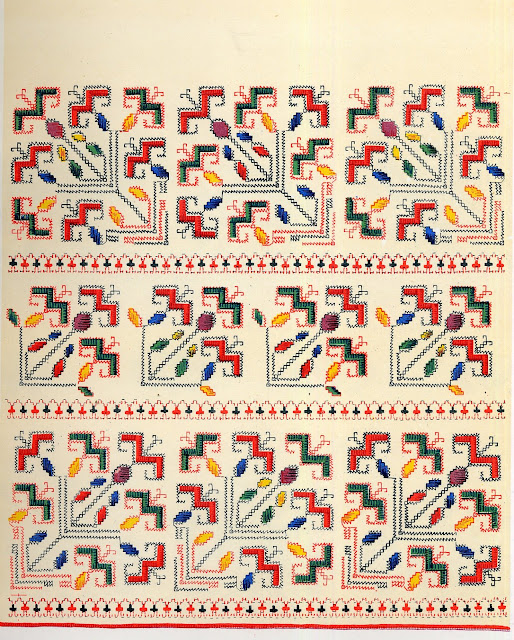 Remember to always plan your project and measure it before starting. 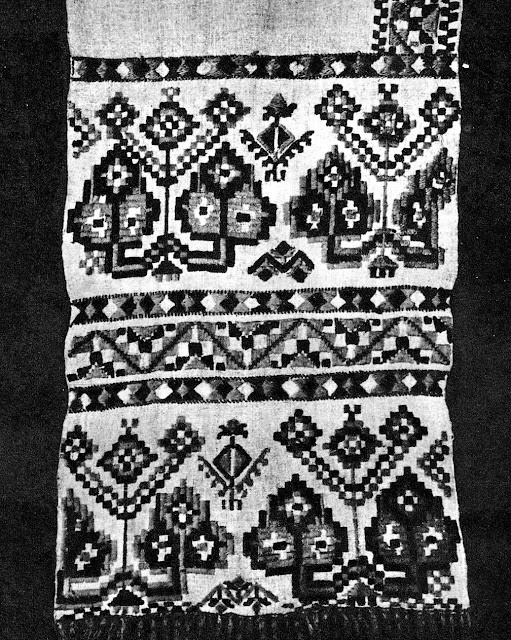 Often a variety of colors forms a harmonious whole. 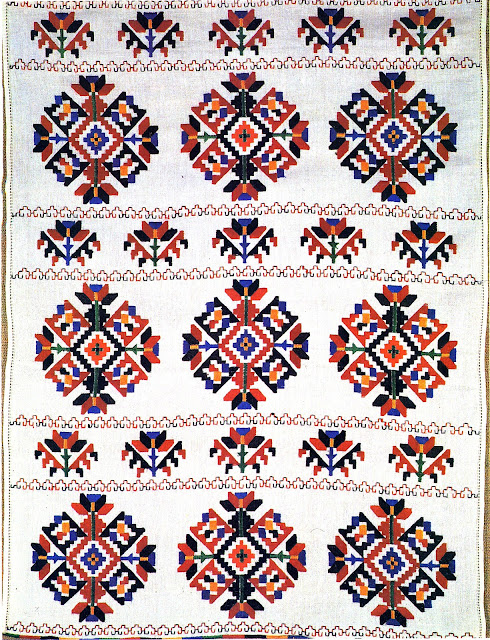 Occasionally the color combinations are quite unfortunate, including eye-searing shades of pink which should be illegal. Unfortunately, folk artists do not always display good taste. These examples tend to be of more recent production. 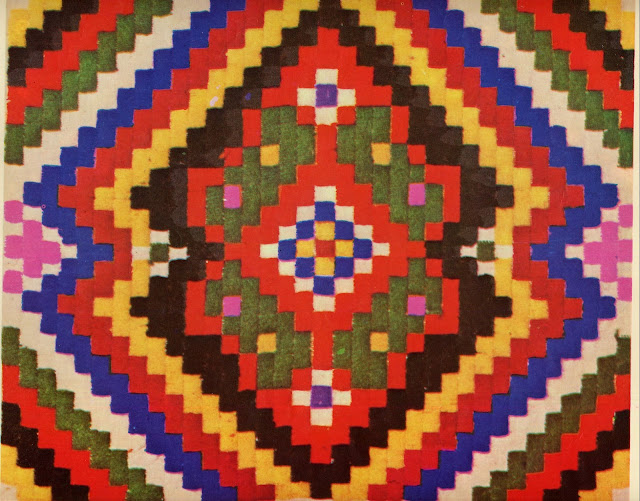 But subtle subdued colors are used as well, although I believe the blue in this example has washed out or faded. 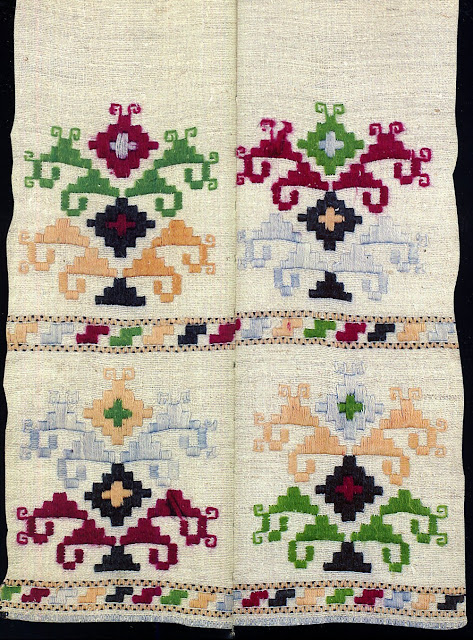 The possibilities of composition are almost endless. I will finish with a few more examples showing the range of different motifs. 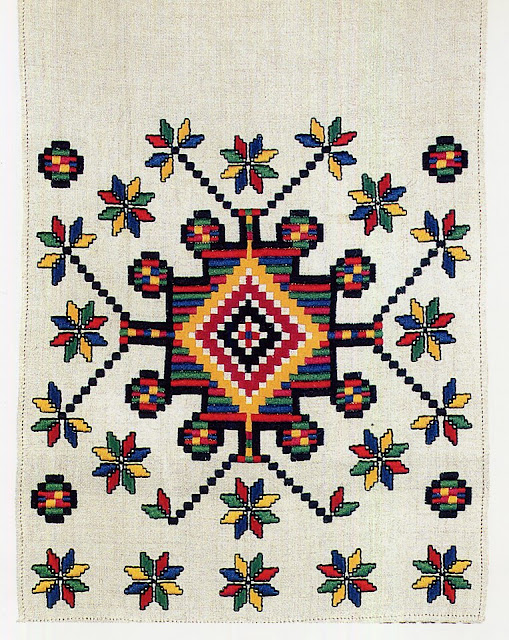 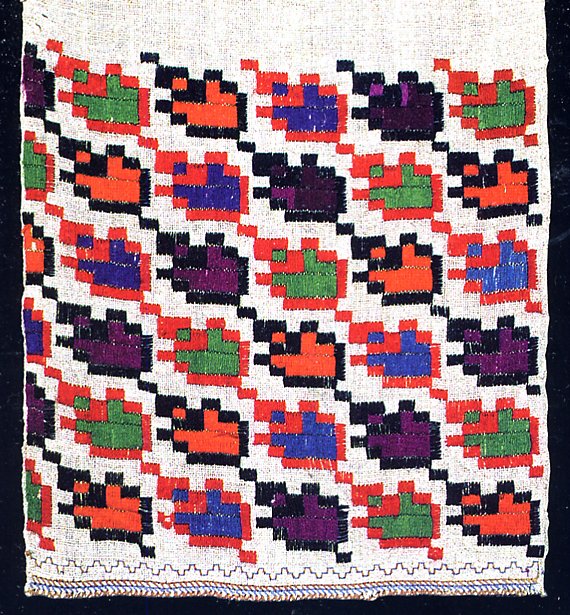 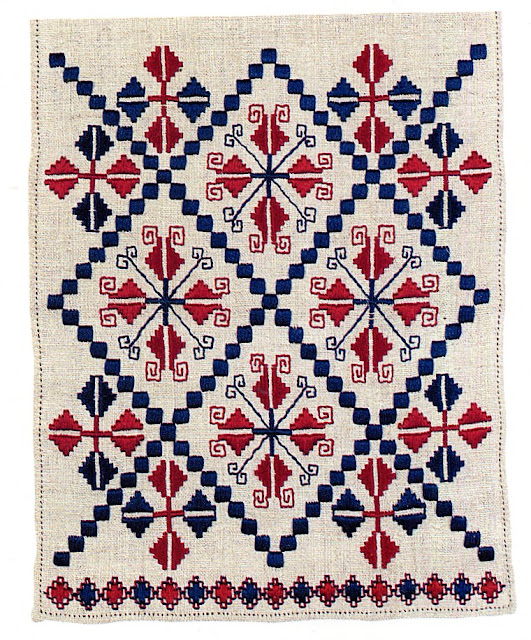 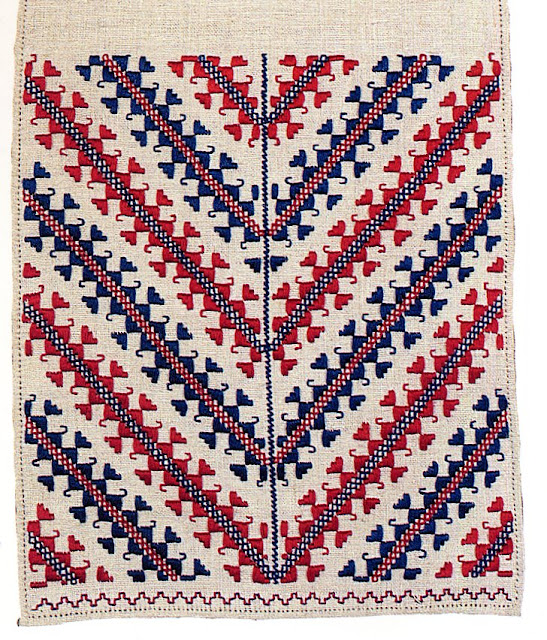 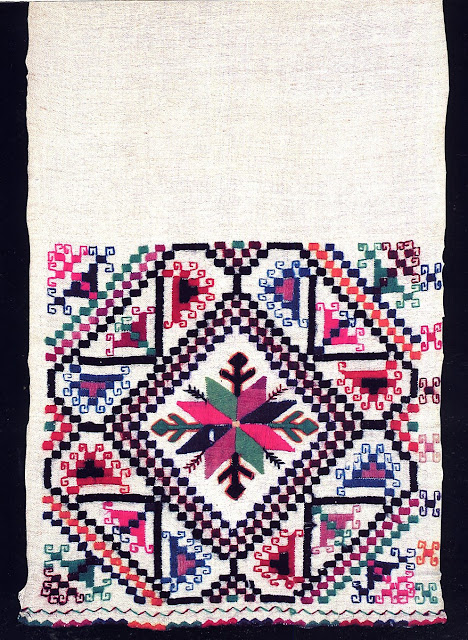 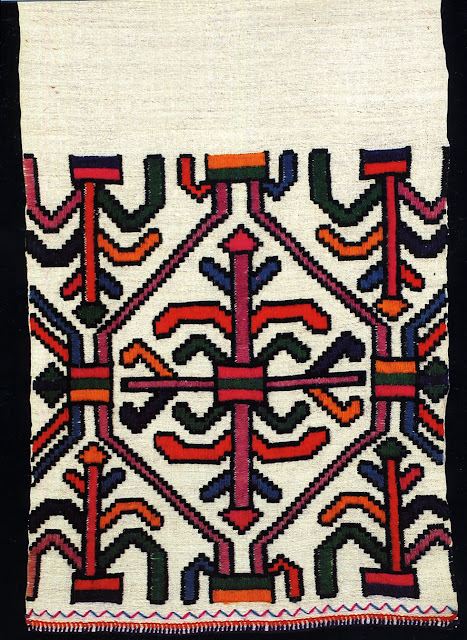 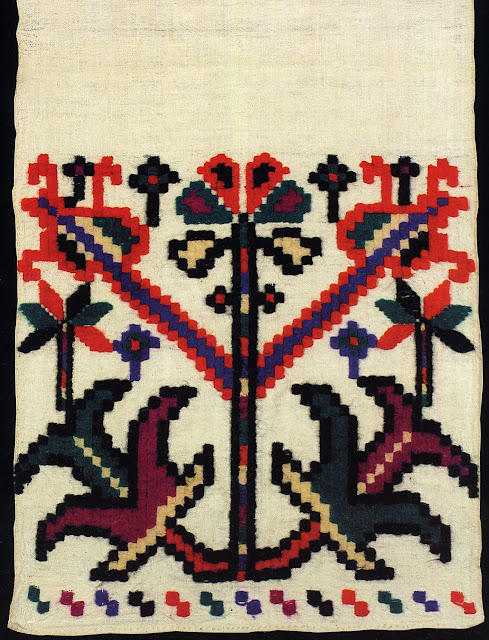 Thank you for reading, I hope you have found this interesting and inspiring.
These types of embroidery designs are perfect for any project in which bold bright designs would be helpful, such as a wall hanging or shopping bag, or even a rushnyk. Bring a little piece of old Podillia into your home or life.