Men's Costume of the Island of Krk, Dalmatia, Croatia

Today i will continue my last posting with a description of the men's costume of the island of Krk. See my previous posting for general information on this island.
This costume falls solidly into the Mediterranean type of Costume. It has more in common with the costume of the islands and coasts of the Meditterranean than it does with the costume found inland from the coast.


I had a request form one of my readers to make one of these for her son, because she is from the Croatian Islands. Here is a photo of the finished costume. 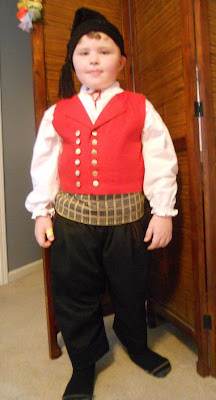 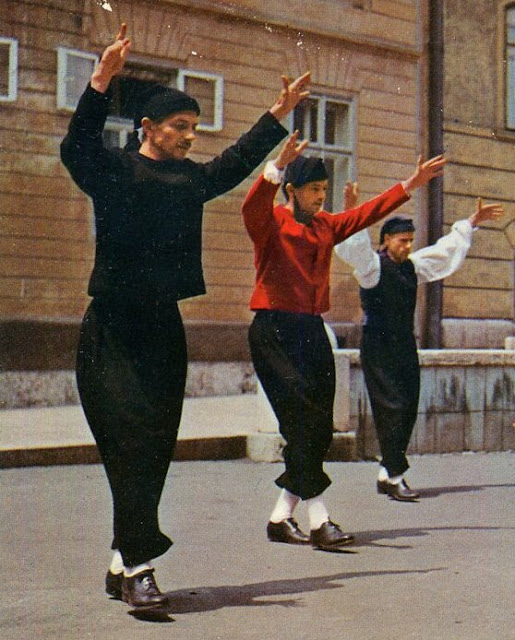 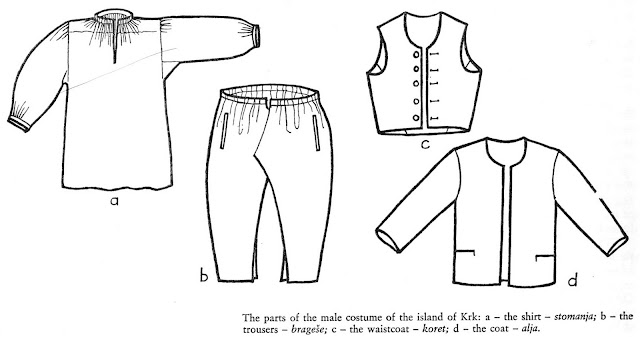 The shirt has a similar cut to the woman's, with shoulder pieces. This is similar to the type of shirt found among many of the northern Slav peoples. The sleeves and body are full, There are no cuffs or collar, but the sleeve ends and body top are hemmed and then smock gathered with a decorative design, similar to the women's shirt, except there is no lace added. 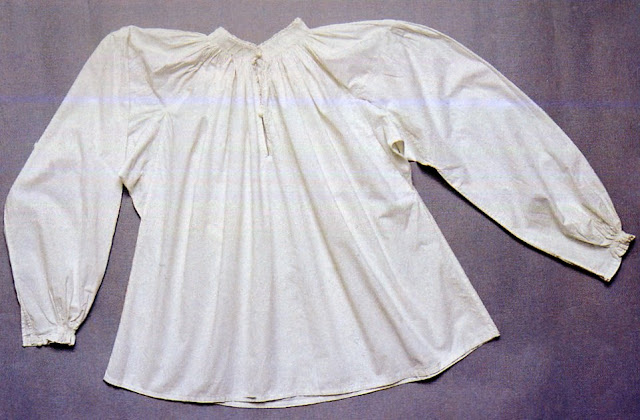 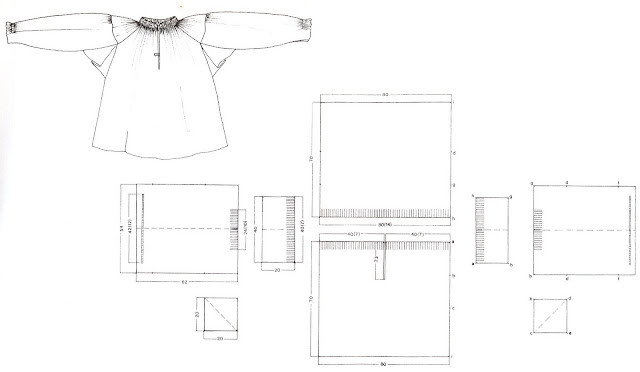 Most likely linen under pants are worn, but these do not show. Two kinds of pants may be worn, the older type are full in the seat, and have the lower leg seam unsewn for a few inches at the bottom. The newer type are called 'sailor pants', have narrow legs and a flap across the front which buttons closed. Both are made of heavy black wool. In some communities each kind may be tucked into the socks, but usually today they hang over the socks. My sources say that there is an inset in the older pants, but they do not show one in the cut. 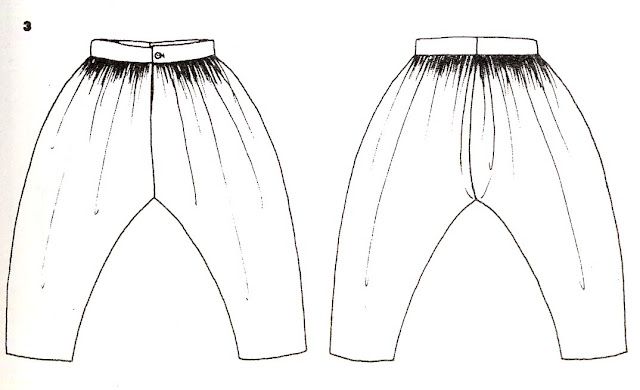 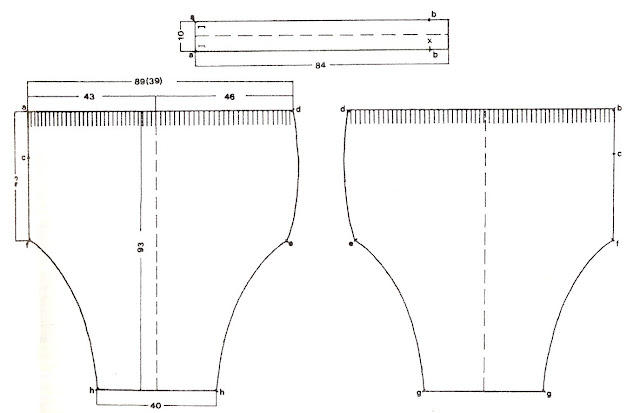 The 'sailor pants' have a completely modern cut except for the flap in front. 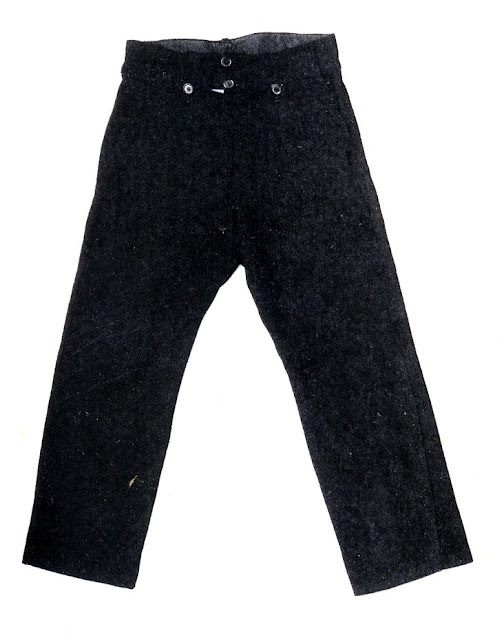 These do not have the character of the old style pants and are much more difficult to sew. 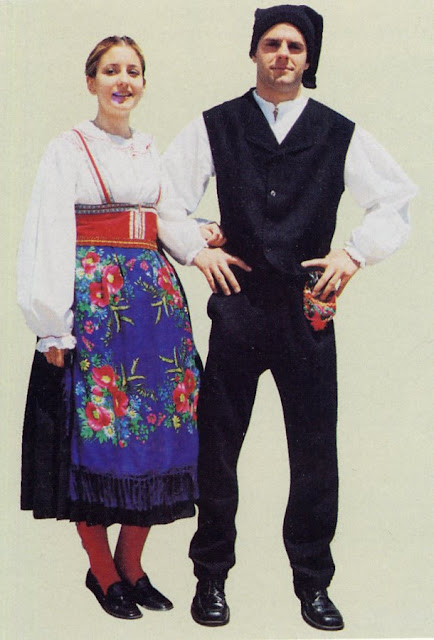 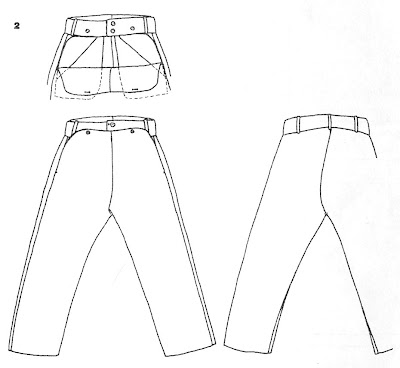 Traditionally a sash was wrapped two or more times around the waist, There is one particularly fine one preserved in a local museum, about 14cm wide and 2.7 m long. Many times the costume is worn without one, however. 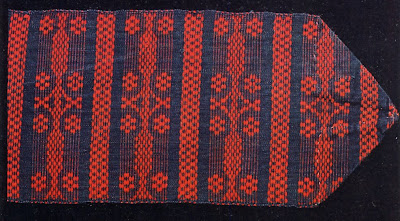 White wool knit socks are worn, with ribbed tops. There are records of postole being worn on the island, which I would take to be moccasin type footwear, but the only images i have seen are of regular black shoes. 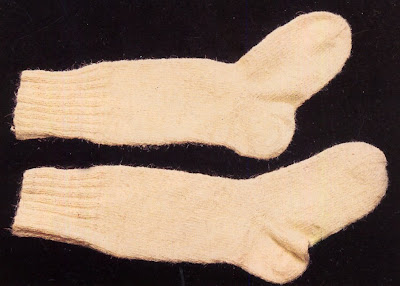 A vest is worn over the shirt. The cut varies somewhat, but the waist is always cut straight across. Some have v necks, some have lapels, some are cut with a high round neck opening with a small collar. See the various images in this posting and the last one. They are usually black, but Vladimir Kirin has painted some made from green plaid, attributed to the town of Omisalj. 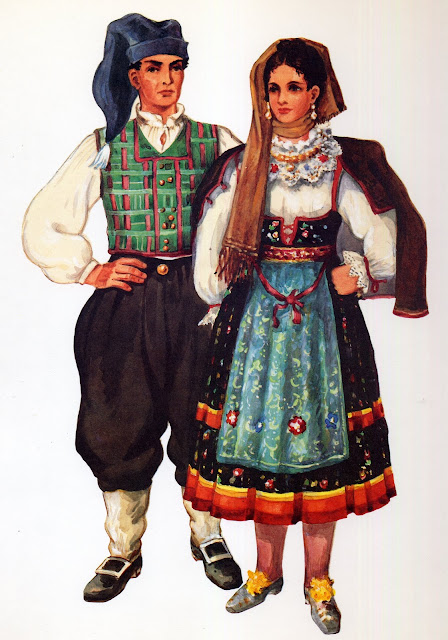 Here is a schematic and cut of the type of vest worn in the town of Kornic. 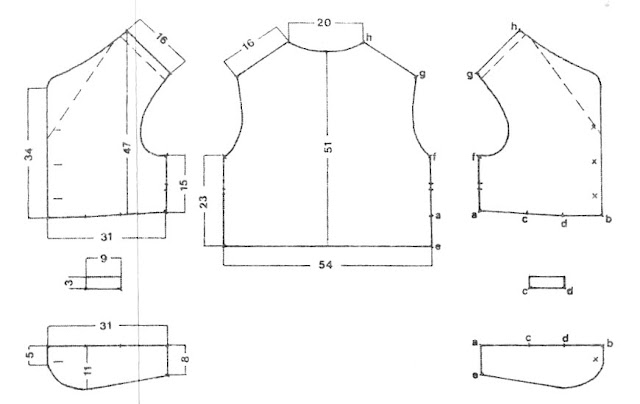 Instead of the vest, or over it, a jacket is sometimes worn. This is usually black, but may be red. Most likely it has a cut very similar to that of the woman's jacket, which may be seen in the previous posting. 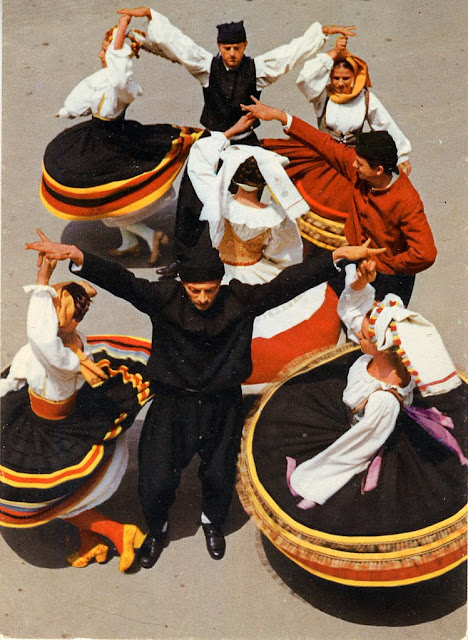 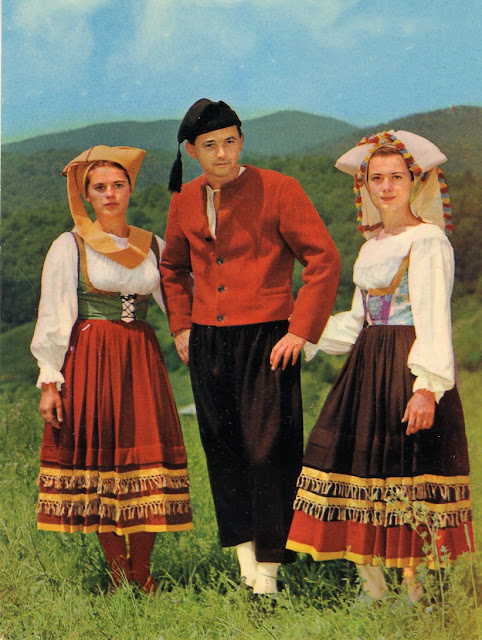 A black wool knit stocking cap with a tassel is worn, This resembles that worn in many places around the mediterranean, as far as Portugal. 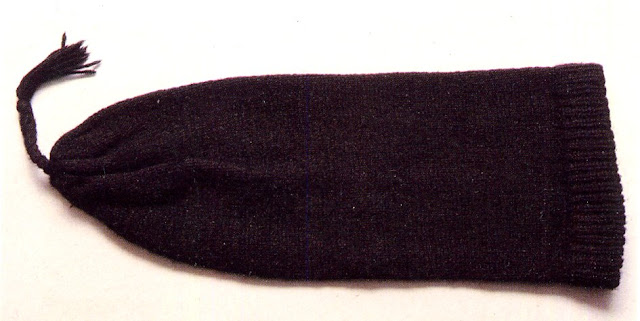 Small pouches called tabakerice were made by girls as gifts for their boyfriends. They are small pouches which had metal fixtures so that they could be closed and hung on belts. They consisted of two pieces which were cut out of old kerchiefs, sewn together and decorated with trim, rickrack, buttons and a tassel. They were used to hold tobacco and to show off the fact that they were a gift from a girl. Knives called kosirice were also worn tied to the sash. 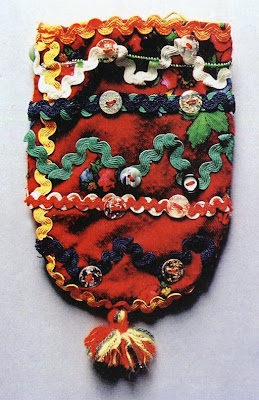 Thank you for reading. I hope that you have found this interesting.
I will close with some more images. 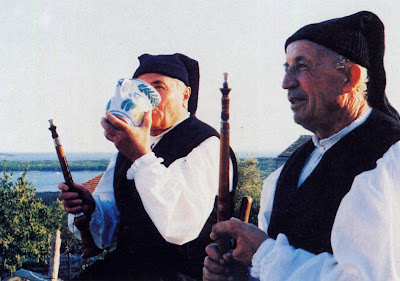 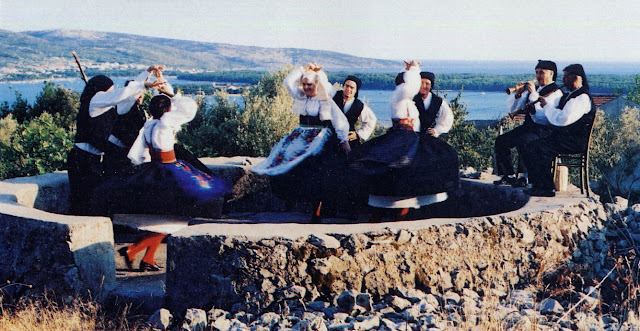 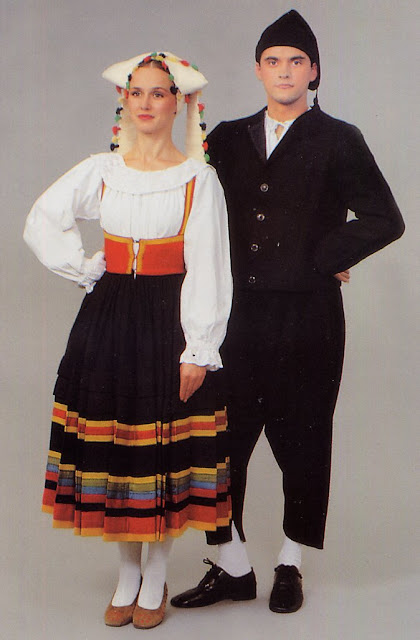 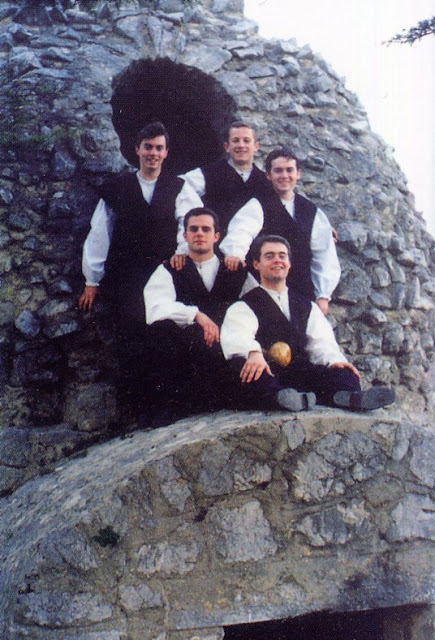 I will repeat here the links which i gave at the end of my last posting.
Here is a link to the Croatian National Ensemble doing the Tanac folk dance of this island. Unfortunately this is a 'professional' video. 'Professional' videos in general hide more of the dance than they show. In any case, this is a wonderful performance, even if the camera editor denies us the opportunity to see much of it. You get a good view of the costumes as well.
http://www.youtube.com/watch?v=TB8YxgIr9bw


Here is a very old archival video of the dance from this island, made in the 1930's, i believe. It suffers from some of the same problems as the first one, and the sound is not in synch with the video, as you do not hear the singing at the same time as you see it. But it is still a valuable piece of historical testimony.
http://www.youtube.com/watch?v=8hBa8FtoB1M&NR=1


Here is a video made by a local group from this island performing at the International Folk Festival in Zagreb, which takes place once every 4 years. I attended once in the 1980's, and enjoyed it immensely.
http://www.youtube.com/watch?v=_YqOYyAgFw8