Today i will talk about the costume of Lithuania Minor,Mažoji Lietuva in Lithuanian, the westenmost region of Lithuania, much of which remains outside the borders of the present state of Lithuania. The major city of this region in Lithuania is Klaipeda, and the region is sometimes named after this city. The history of this region is distinct from that of the rest of the territory inhabited by Lithuanians, in that it very early came under the control of the Teutonic Knights, and was an integral part of the Kingdom of Prussia for many centuries. The influence of Germanic culture and the Lutheran faith was very strong in this region. For more information about the history and development of this region, see this article.

Here is our map again, so you can orient yourself. 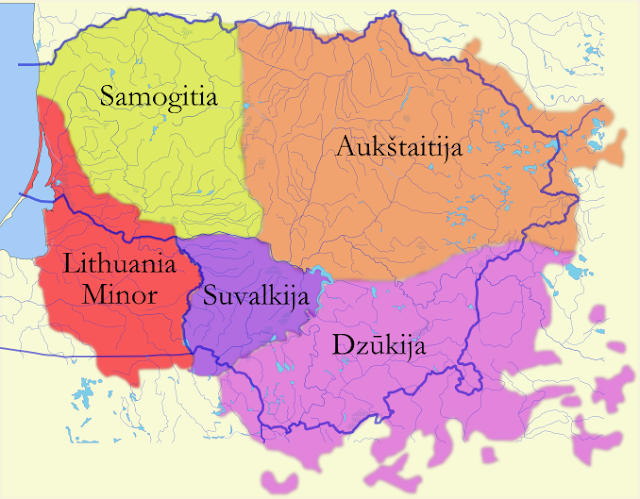 There is a lot of variety in the costume of this region. Sometimes the clothing is as colorful as in other parts of Lithuania, but sometimes the clothing is quite dark and soberly colored, in keeping with protestant sensibilities. Some features of the costume of this region, while not always present, are diagnostic. 1. The main part of the chemise embroidery being on the uppper  sleeve and shoulder inset. 2. pleated skirts, 3. aprons with vertical woven ornament completed with a piece with horizontal ornament attached to the lower edge. 4. a narrow sash supporting an ornamented seperate pocket, worn on the hip. 5. basket shaped headress braided from cord in netting. 6. rectangular white shoulder wrap with curvilinear floral embroidery in white or red down the center lengthwise.
I will start by presenting some images from various sources. Keep an eye open for the above costume characteristics. 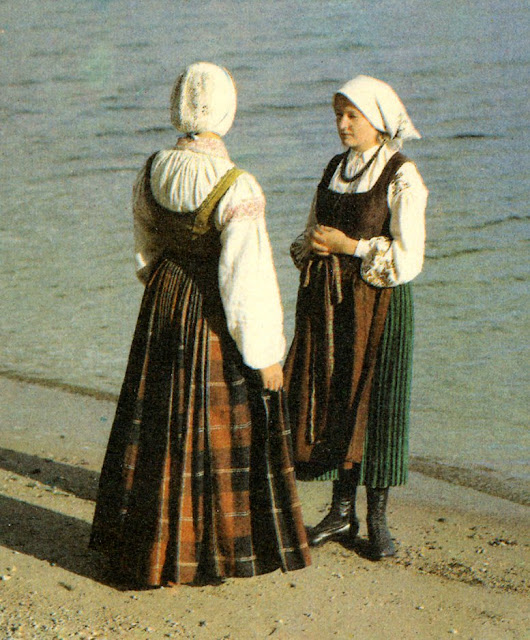 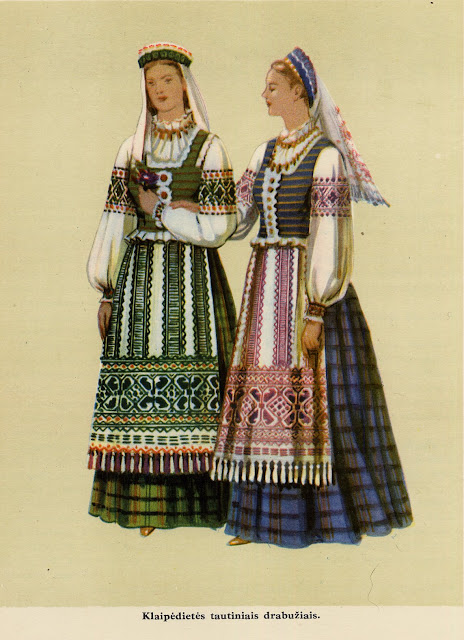 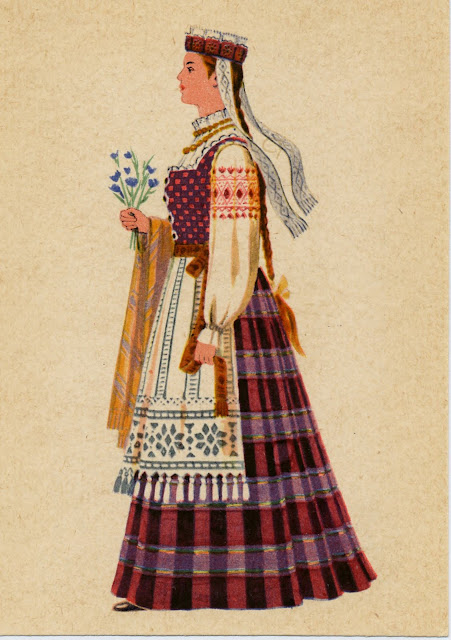 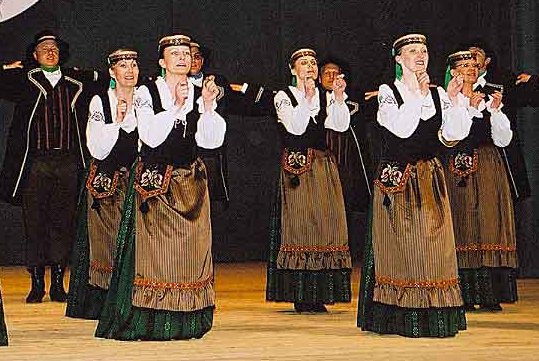 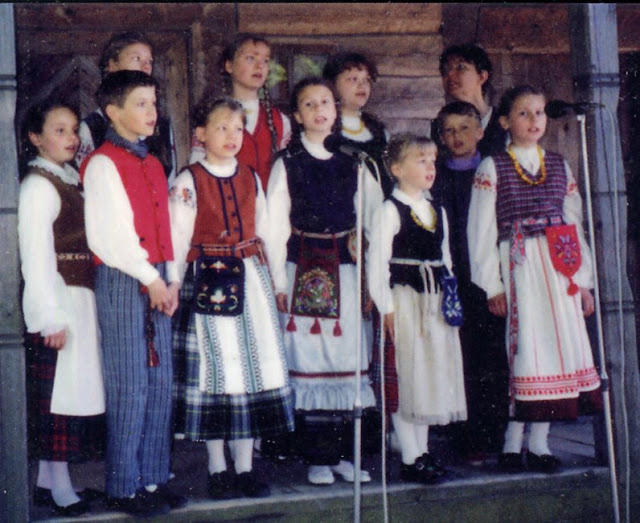 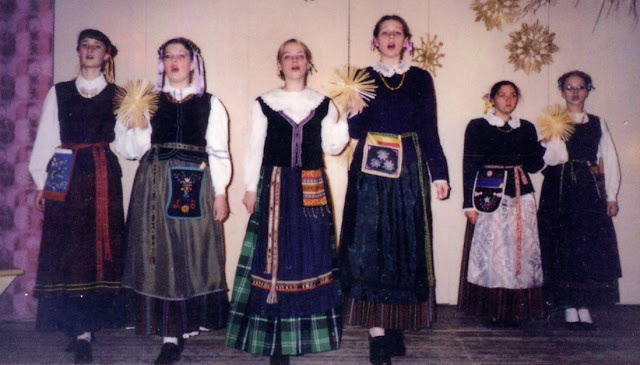 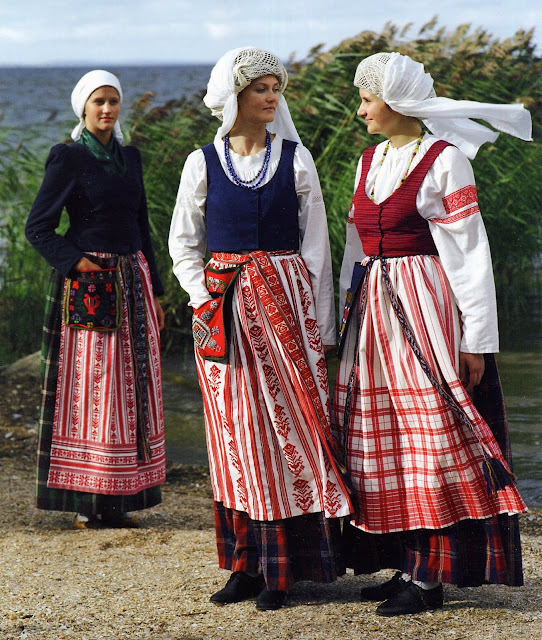 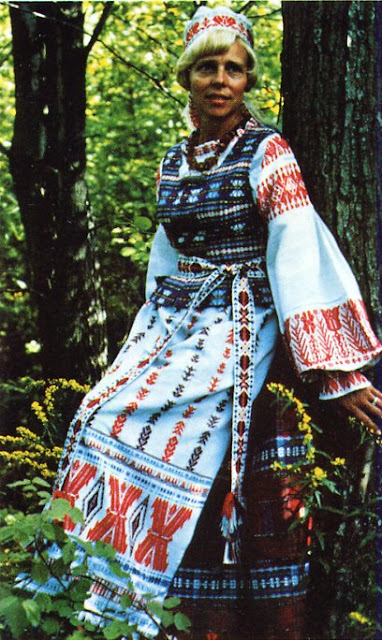 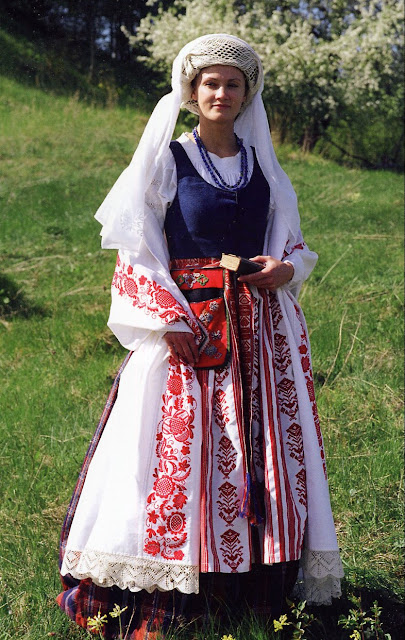 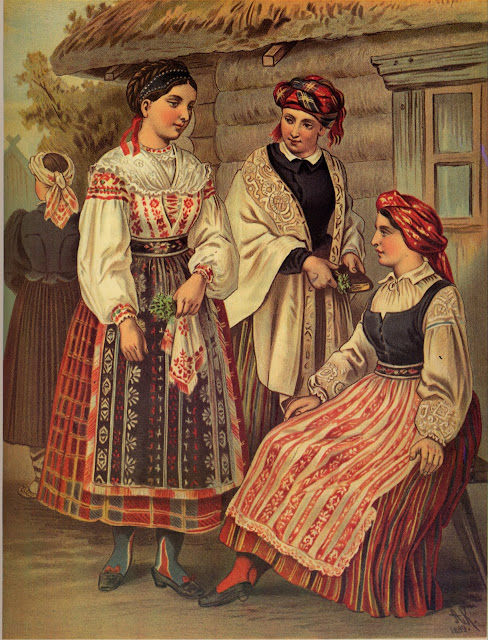 The chemise in this region is often sewn with a different cut than in the rest of Lithuania, with a shoulder inset sewn to the top or side of the main body pieces. The shoulder inset has woven ornament or is embroidered, the ornament being displayed on the uppper arm. Sometimes embroidery is also added at the top of the sleeve. This is very similar to what is found in slavic costume. It is interesting to speculate where this came from, as this part of Lithuanian is furthest from Russian/Bielorussian influence. Other cuts are also used. Here is a schematic of the cut. 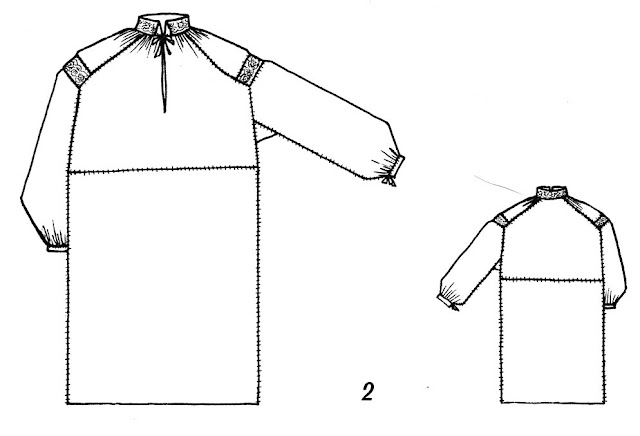 Here are some examples of the embroidery used on the chemises. 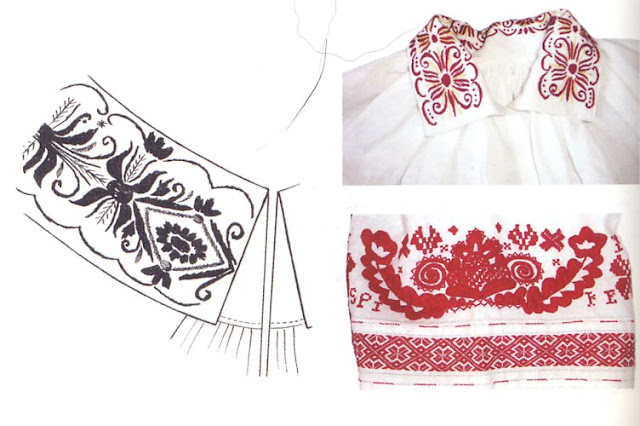 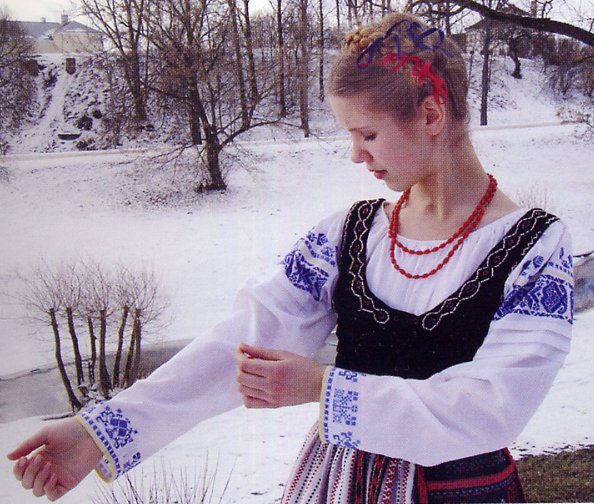 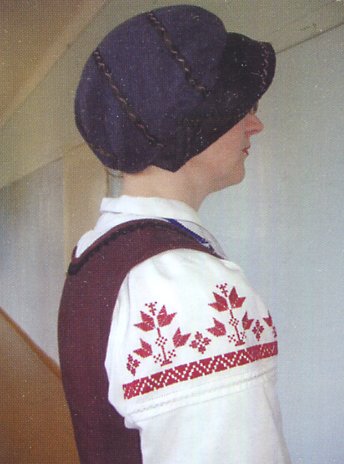 Here are some of the embroidery patterns used.

One unfortunate recent development is that the embroidery is sometimes placed lower on the sleeve through a misunderstanding of the cut  of the chemise, especially when the entire sleeve is made in one piece. This unfortunate tendency is also seen in modern Ukrainian blouses as well. Here is one example of embroidery hanging too low on the arm. 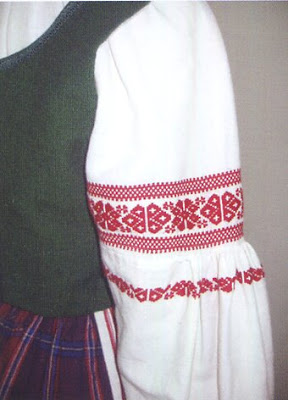 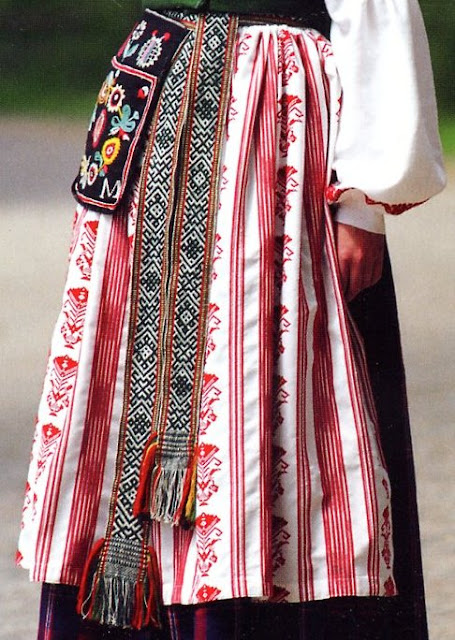 The type of apron usually considered to be the most unique to the region has vertical woven ornament in the body of the apron, with a piece attached to the hem which has horizontally sewn ornament. Here is an example. 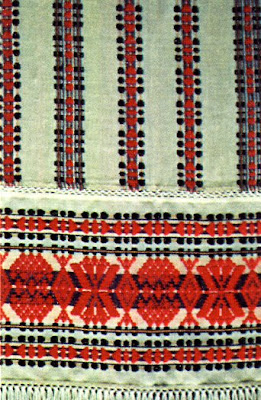 Bodices are short in this region, often not extending past the waist, but bodices with short peplums are also known.  Here is one cut given for a bodice from Lithuania minor. 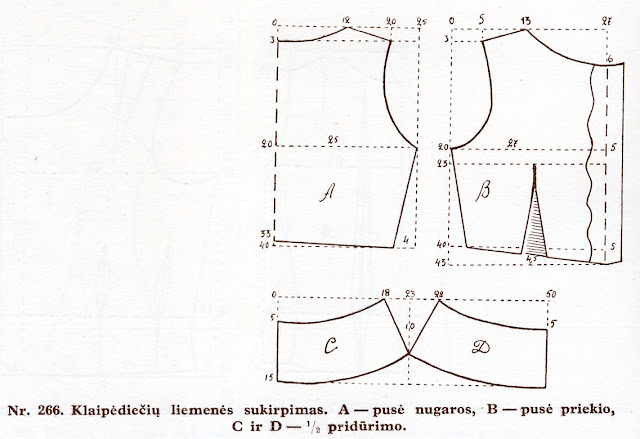 These bodices are sometimes ornamented with braid or ruched ribbon. The neckline can be cut more deeply than in other parts of Lithuania, showing moree of the chemise, and giving the effect of narrow straps over the shoulders. One type of bodice used in this region is cut straight across the top under the arms, and in fact does have straps, the result being a square 'neckline'. Here is an example. 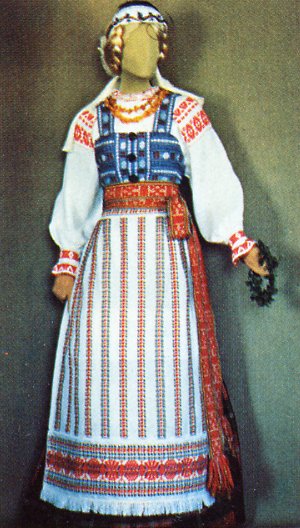 Sashes are worn here as in the other regions of Lithuania. Some are wide with showy patterns. But another kind of sash is also used here, which is narrow and has many different patterns woven into it, the so called 'hundred pattern sashes'. 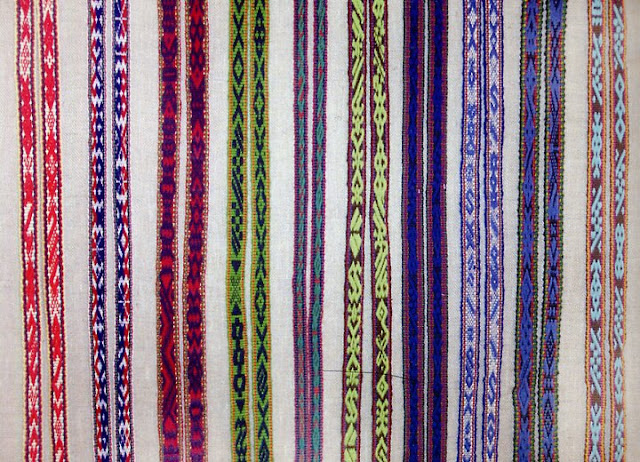 A pocket was often worn with the costume in Lithuania as in many other places. this was usually worn under the skirt or apron. In Lithuania Minor, there was also a very decorative pocket called delmonas, which was worn on the outside of the skirt. This garment, while very common in Scandinavia, is rare or unknown in the other parts of Lithuania. The most casual perusal of the images in this posting will show the incredible veriety of shapes and ornament used on these pockets. However they are usually flat with an open top, or a slit on the front, or a flap, and are threaded onto a length of the 'hundred pattern sashes'. Here are a few more examples. 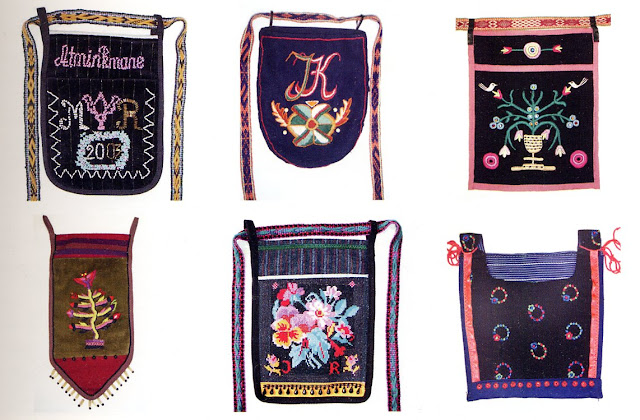 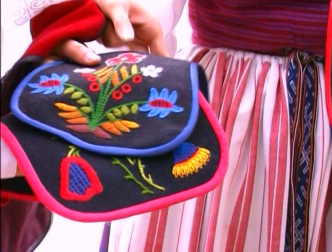 The festive attire was finished with a necklace of glass, coral, or especially amber, as this region lays on the shore of the Baltic Sea. Headgear is varied, consisting of a kerchief, karuna, cap, or bonnet. The most unique headgear consists of netted string placed over a frame, which was only worn by married women. This does not seem to have been worn in the city of Klaipeda. Unmarried girls did not cover their hair, but braided it into a crown, and sometimes added wreaths of flowers or leaves, especially of rue, which has a special significance for the Lithuanian people. See the following two photos. 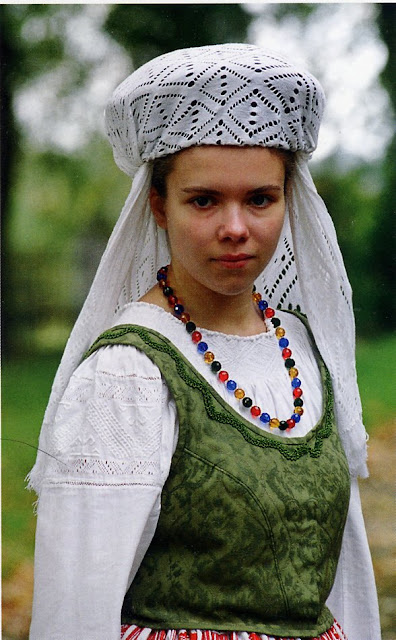 At the end of the 19th century, in some places, especially in the cities, short jackets were popular. Over these, and even over bodices were worn triangular folded shawls which were similar to those worn in central and western Europe. 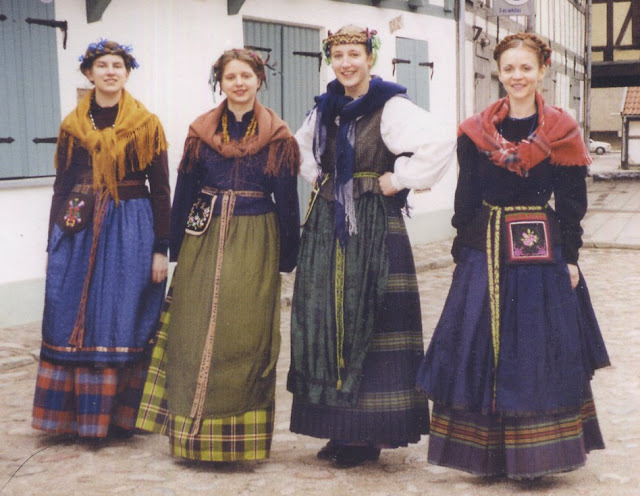 In other areas, the old rectangular shoulder wrap, the Drobule was retained. These were made of one panel of cloth, and often embroidered in a wide strip down the center. When they were worn, they were folded to be relatively narrow, and wrapped around the shoulders, perhaps in imitation of the empire style. The embroidery was either in white or in red. Here are two examples of the distinct embroidery done on the Drobules. Thank you for reading, i hope that you have found this to be interesting, informative, and perhaps inspiring. Let us continue to make beautiful things to fill our world. Here is one last image for this posting. 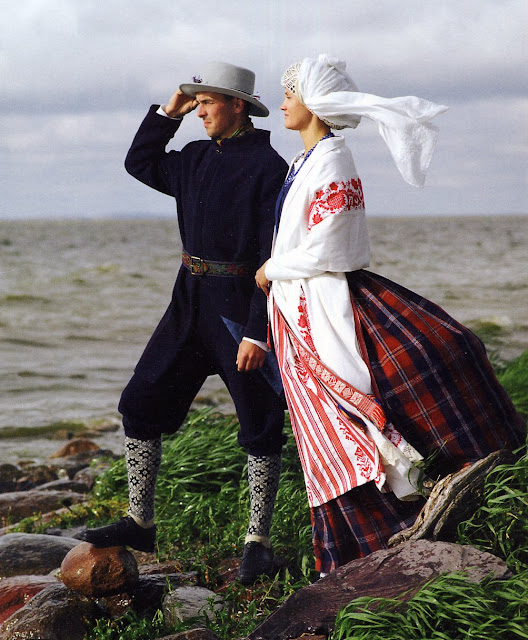 For more information on the Klaipeda costume see this article by Jurkuviene.
http://ausis.gf.vu.lt/eka/costume/cost_klaipedar.html
Feel free to contact me with requests for research. I hope to eventually cover all of Europe and the Former Russian Empire/Soviet Union. I also gratefully accept tips on source materials which i may not have. I also accept commissions to research/design, sew, and/or embroider costumes or other items for groups or individuals