Today i am going to talk a bit about the costume of Samogitia, or Žemaitija, which is basically the northwest quadrant of Lithuania. For a bit about the history and dialect of this province, see this article.
http://en.wikipedia.org/wiki/Samogitia

I mentioned in my first posting about Lithuanian costume that there is somewhat of a dichotomy in the source material. The material concerning this region is relatively uniform. I will start by presenting a map so you can orient yourselves. 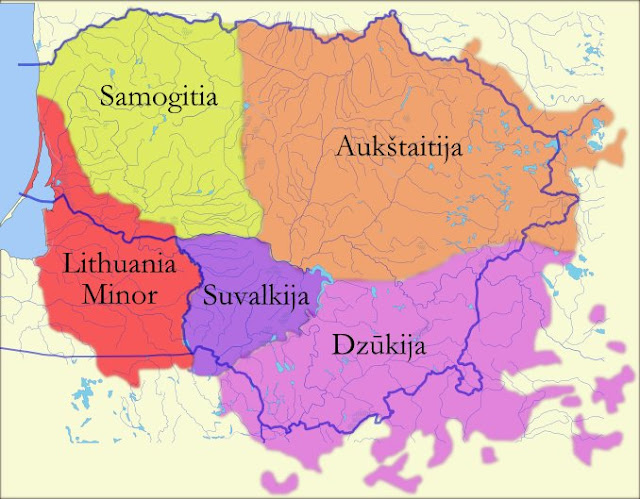 Let us start by presenting a few images from various sources. Firstly, a print by V. Palaima, representing the 20th cent school. 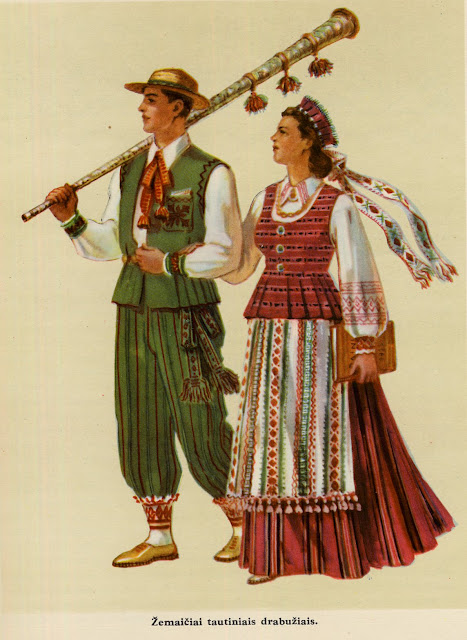 And an image from Glemzaite, equally from the  20th cent school. 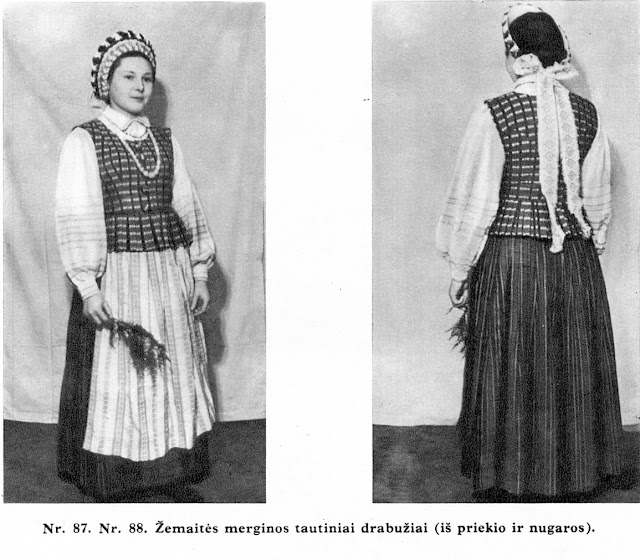 Here is a watercolor representing the 21st cent. school.

Here is an image from Bernotiene 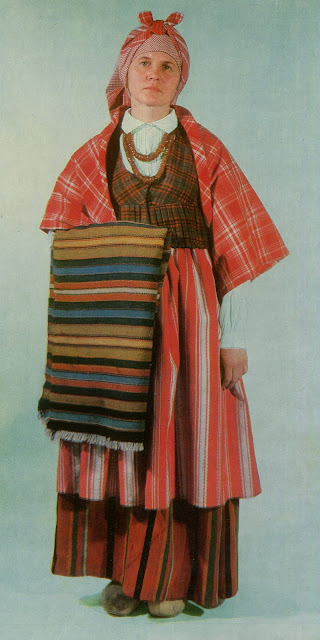 The chemise is of the type typical for Lithuania, with narrow shoulder tabs, often plain, but also at times with red woven ornament on the collar, cuffs, lower sleeves, shoulder tabs, and front. 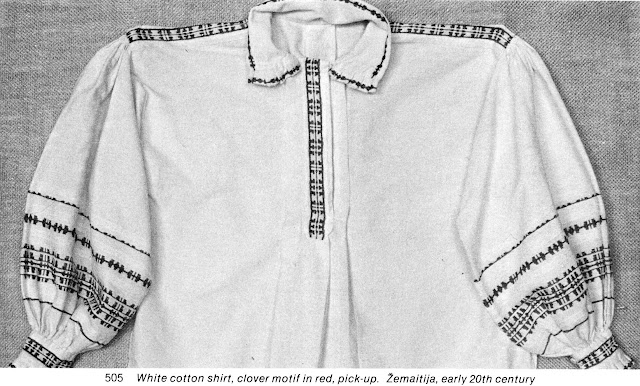 Here is a color schematic of one sleeve. 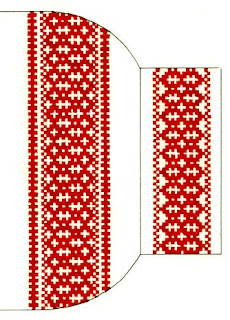 The bodice, which is made of a home woven plaid or patterned cloth, has a distinctive cut, with a round neck, center opening, and a pleated frill around the bottom. In some photos, the main body of the bodice is rather short, forming an empire waist, while in others it is longer, the frill forming a peplum at the waist . Compare the various images in the posting. Here is the cut. Notice that 1/4th of the frill/peplum is shown. 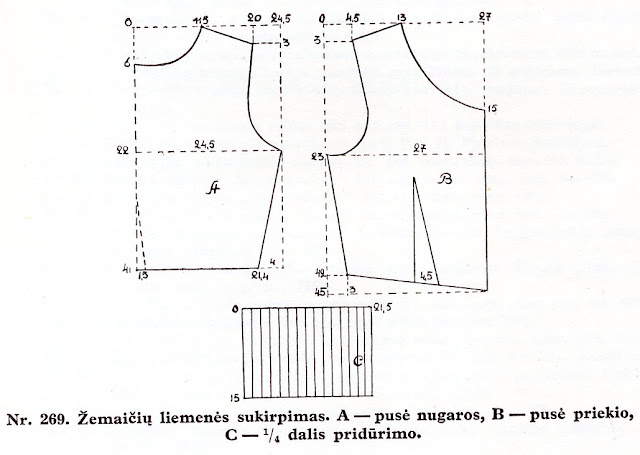 Here is a back view of the short version of the bodice, from Balcikonis. 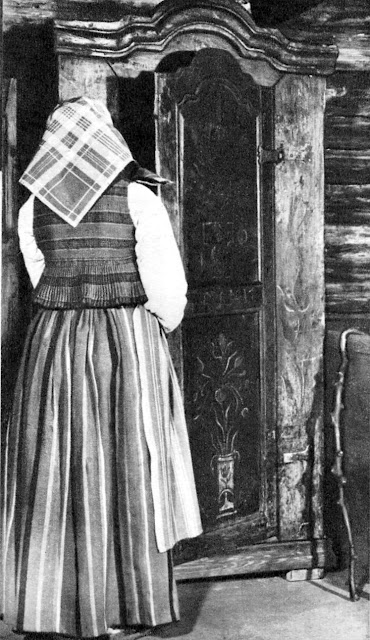 You will notice that in the aprons and skirts, the overwhelming tendency is towards vertical stripes, mostly dark for the skirts, based on red and other colors. The aprons show some variety, some being simple stripes, some being stripes of cat's paw, clover or other motifs. The aprons are often red stripes on a white background. Here are a few examples. 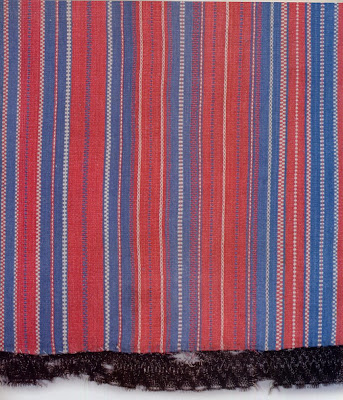 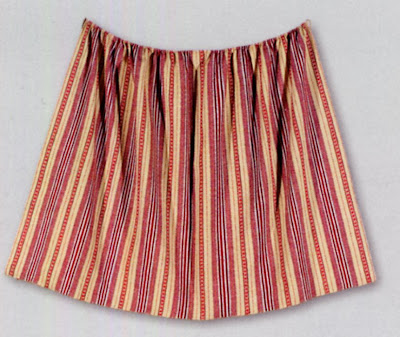 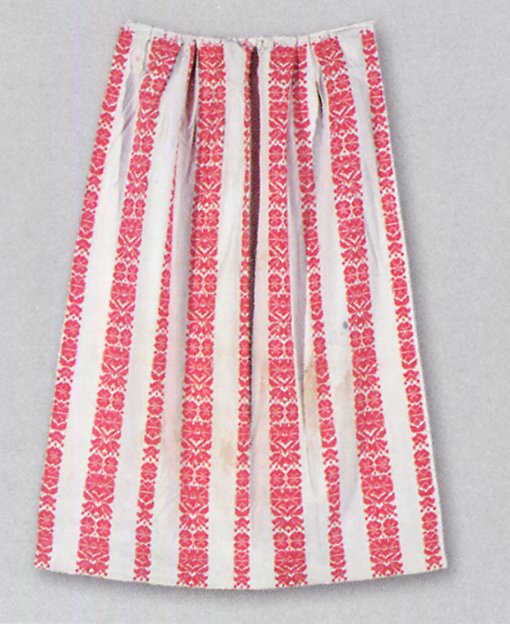 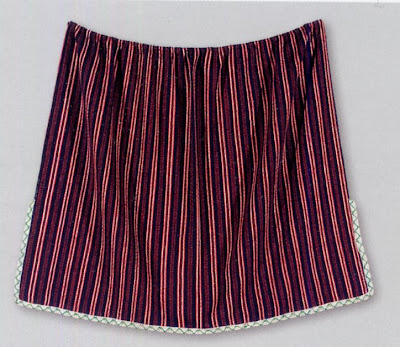 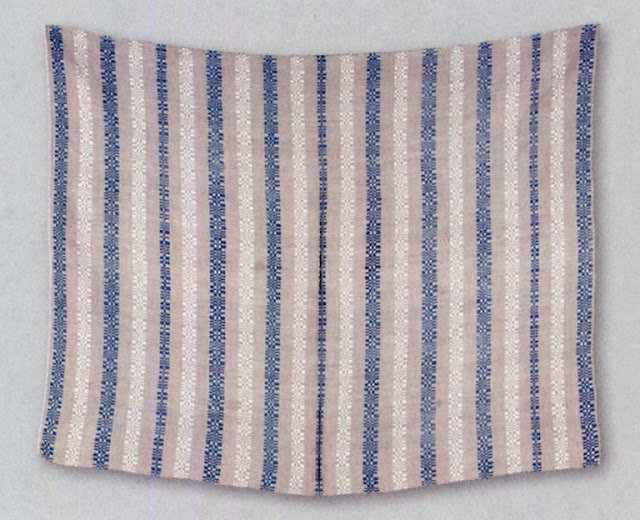 The skirts are sometimes plaid, but mostly vertically striped. they tend to be quite full, and are worn over the chemise, with a linen or wool petticoat or under skirt, or more than one. Sometimes the topskirt is kirtled up in order to show the skirt underneath, which contrasts with the upper skirt. 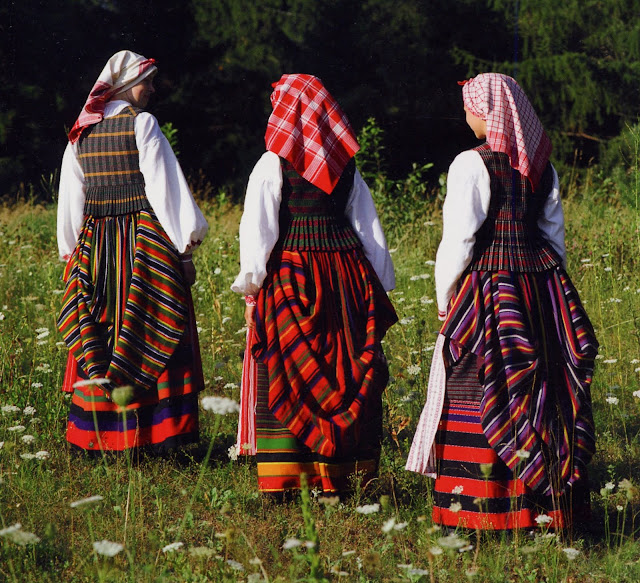 You will notice that in place of the nuometas, the wimple, the married women wear a kerchief, commonly plaid, which is sometimes tied under the chin, but very often wound around the head and tied on the forehead. Often these kerchiefs have short fringes around the edges. This gives a unique outline to the headdress. At times, more than one is worn. The karuna, the unmarried girl's crown in this area is often made of two ribbons twined around each other and then mounted on a base these are called rangai. See the second and third images above. 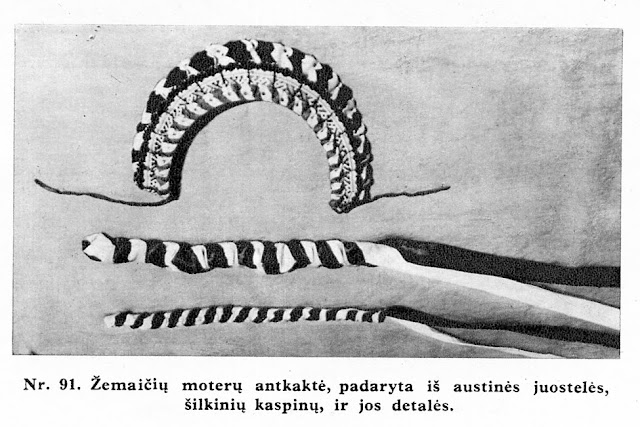 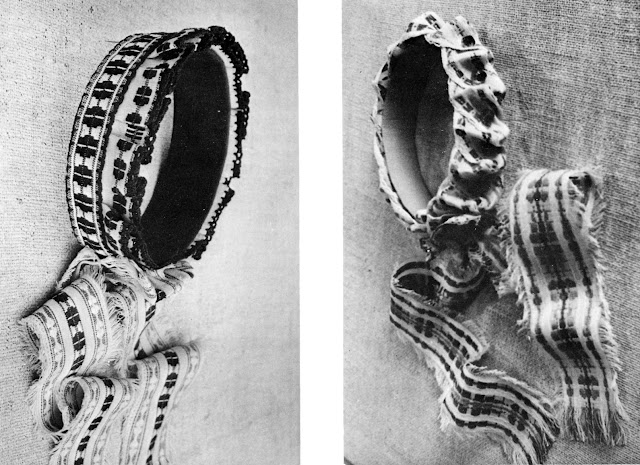 This region is close to the Baltic Sea, so amber is very commonly worn, take a look at the various images. The drobule, the rectangular linen wrap was worn in this region, with pattens woven into the linen and red ornament on the edges, woven in with the weft.

But it was more common to wear or carry square or rectangular linen or woolen wraps that are striped or plaid. Footwear include shoes, moccasins, nagines, shoes woven of birchbark, vyzos, or shoes carved from wood, klumpes. Thank you as always for reading, I hope you found this interesting. I will conclude with several more images. 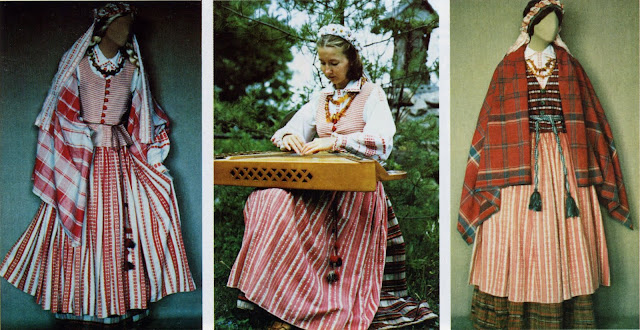 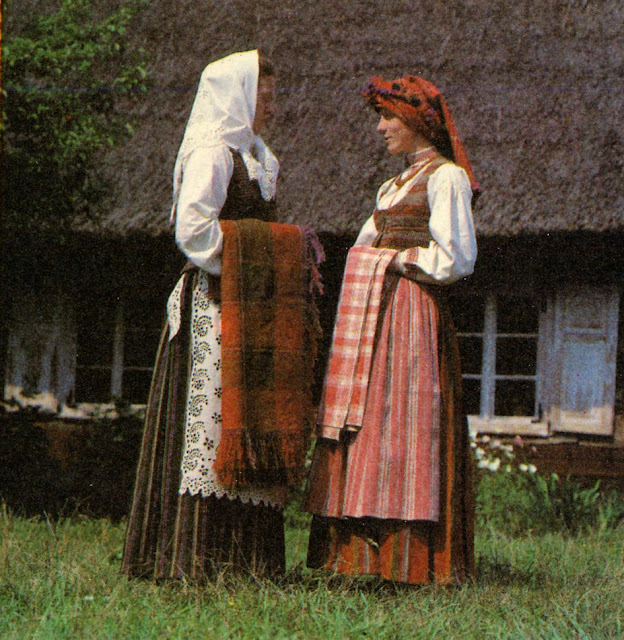 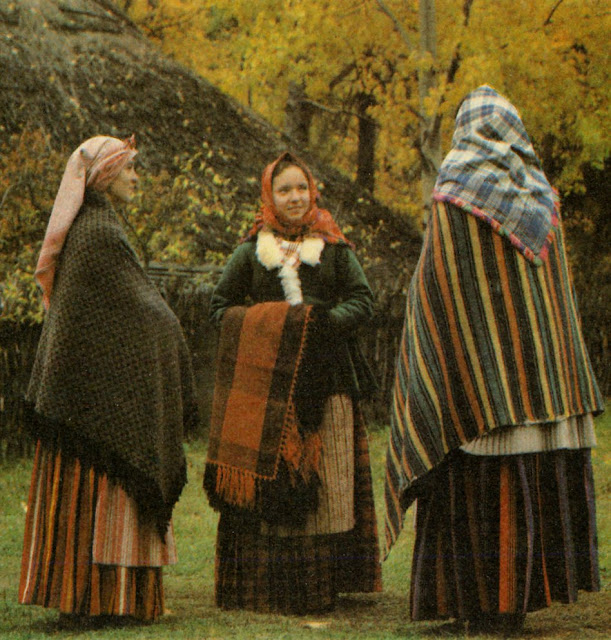 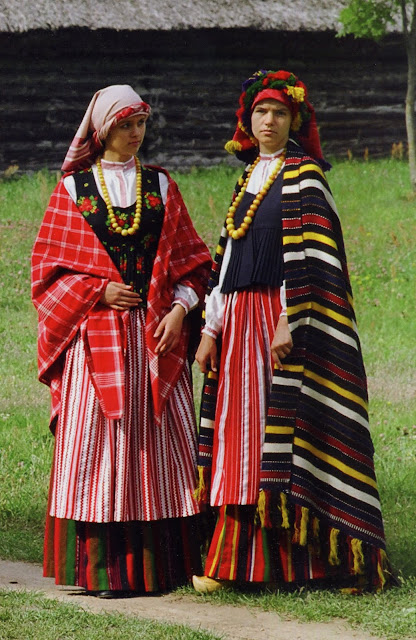 For more information, you may consult this excellent article by Jurkoviene.
http://ausis.gf.vu.lt/eka/costume/cost_zem.htm