Today  I am going to concentrate on a piece of clothing that might be surprising, mittens. Knitting has become a strong piece of the craft history of the northern peoples, in Scandinavia, the Baltic countries, and even among the Komi of North Russia. In many of these places, it is common to see people dressed up in the traditional costume with a pair of knitted mittens tucked into their sash or belt.Among the slavs one does not see this, typically mittens are sewn of sheepskin or heavy woven wool, and are considered completely utilitarian.
A good friend of mine, Aelita, who is from Latvia, tells me that women, especially young women, were expected to make many pairs of mittens [or gloves, the same word is used in Latvian, Cimdi, but usually mittens], and give them as gifts on special occasions to fathers, uncles, brothers, friends, and of course, those in whom they had a romantic interest. They in turn were expected to let them be seen. Thus the skill of knitting fine patterns was valued and shown off by displaying them even when not actually being worn. Thus, of course, they also formed an important item in a girl's trousseau. Here are some Nica mittens being displayed on a hope chest. 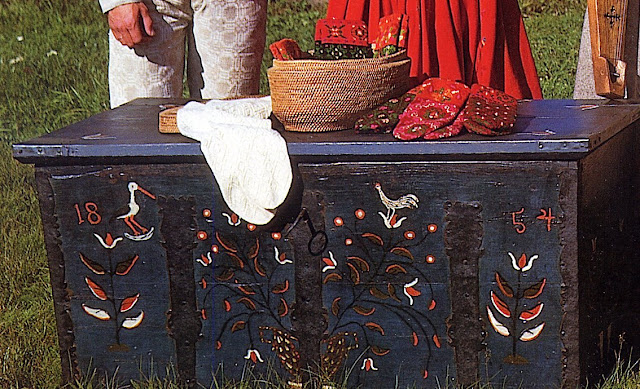 Latvian mittens all had basically the same shape and were a good field for displaying designs, being flat with a peak. Here is one example. 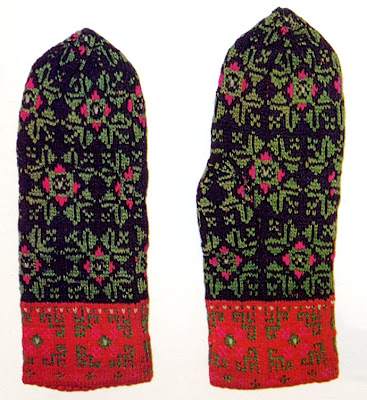 There are many many pattens known. Today I will present several from the town of Nica. I do not know how distinct the patterns of the different regions are. In Nica, there is a tendency to make the cuffs in a different contrasting color and design. They freely mixed colors which we might consider clashing, like pink with red. 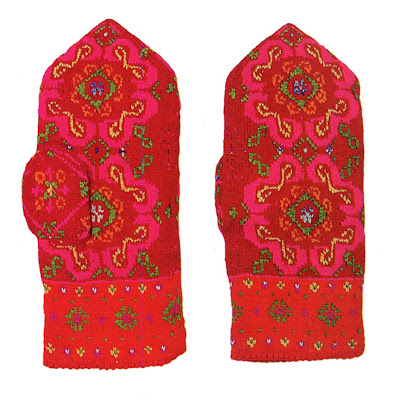 These added a spot of color to a costume that was otherwise mainly an array of restrained shades. I will present several more designs. Here is one more photo. 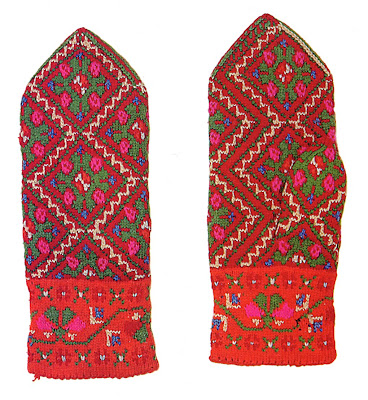 The rest of the designs are graphed. This is a graph of the pair shown immediately above. Note that the cuff is shown at the top of the graph. 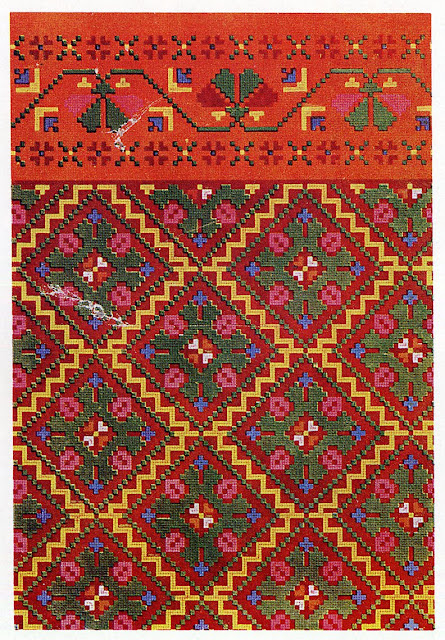 Not all of them have this gaudy coloring. 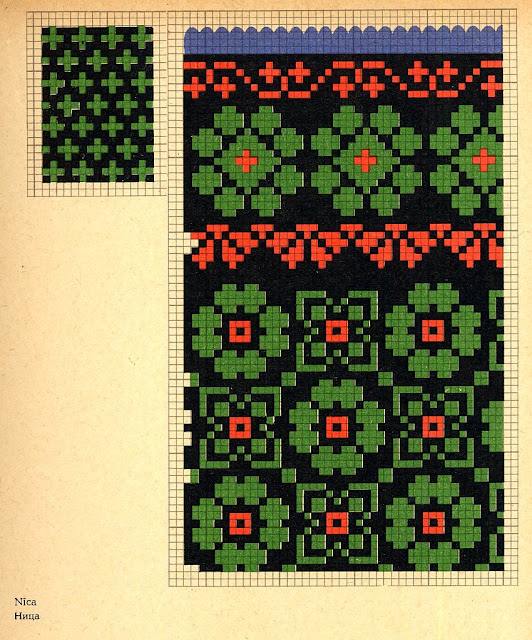 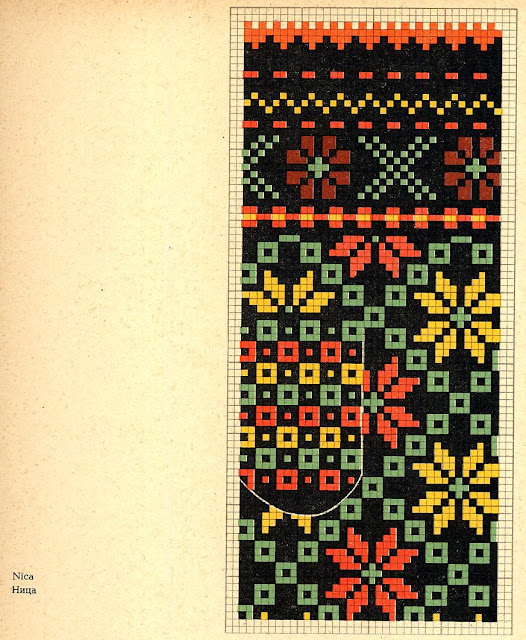 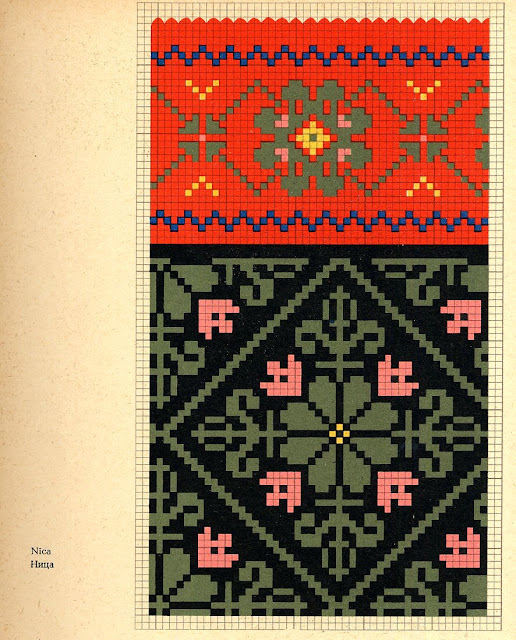 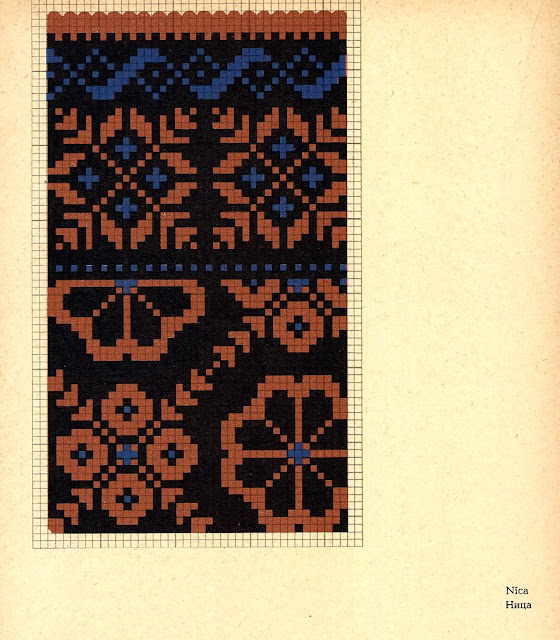 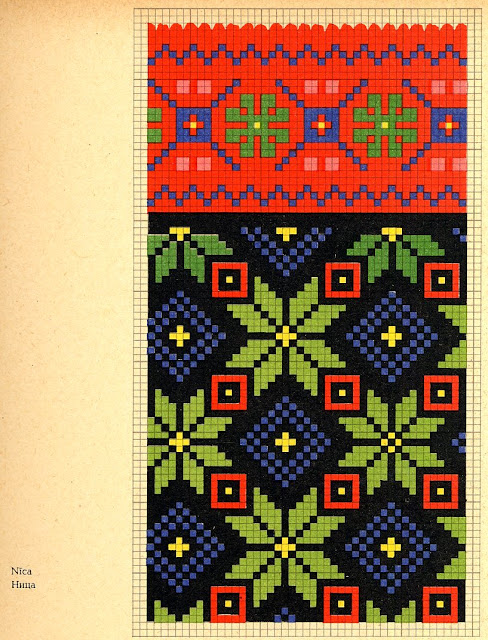 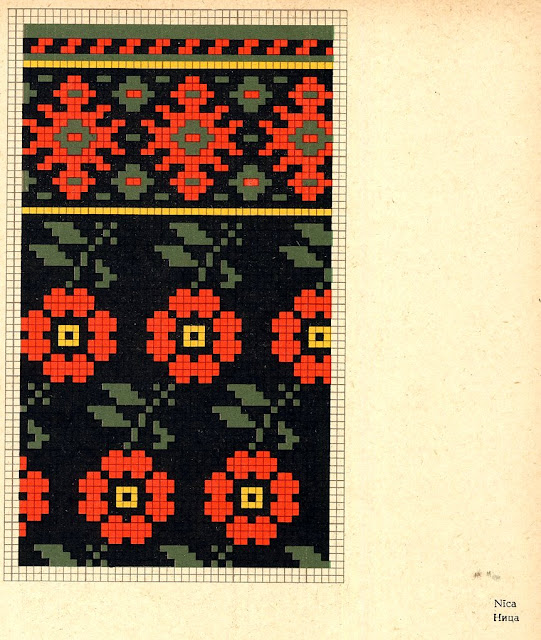 For thos of you who knit, i hope you find some of these intersting enough to use, or adapt them to cross stitch or needlepoint, or whatever you might do. These latest graphs are from an old book in which the inks available were limited, so feel free to adjust the shades of the colors so that they harmonise. Or, for that matter, change the colors entirely for your project.
Here is one last design which must have been executed in extremely tiny stitches. This was obviously meant for someone special. 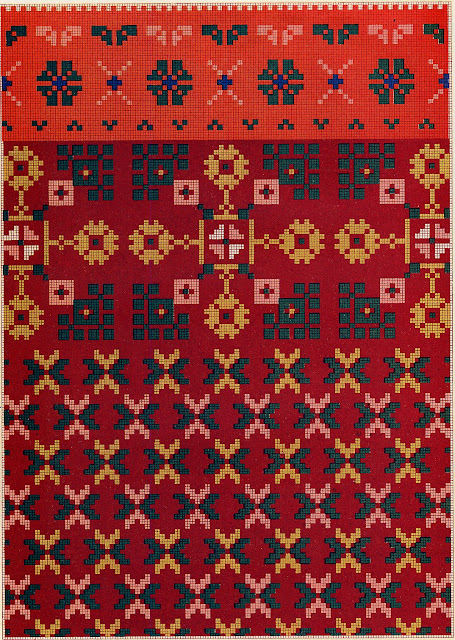 Thank you for reading. I hope that this has been interesting and inspiring. The advntage of making things oneself is that one can put ones personal stamp on ones environment. We should not have to settle for mass produced items that are the same as everyone else has.
Feel free to contact me with requests for research. I hope to eventually cover all of Europe and the Former Russian Empire/Soviet Union. I also gratefully accept tips on source materials which i may not have. I also accept commissions to research/design, sew, and/or embroider costumes or other items for groups or individuals