Hello all, I'm dedicating this posting and the following to my friends Karen M. and Ted Zed. Today i will be venturing into the world of Polish Costume. I will be talking about the costume from the region around the town of Krzczonow, marked in red in this map. 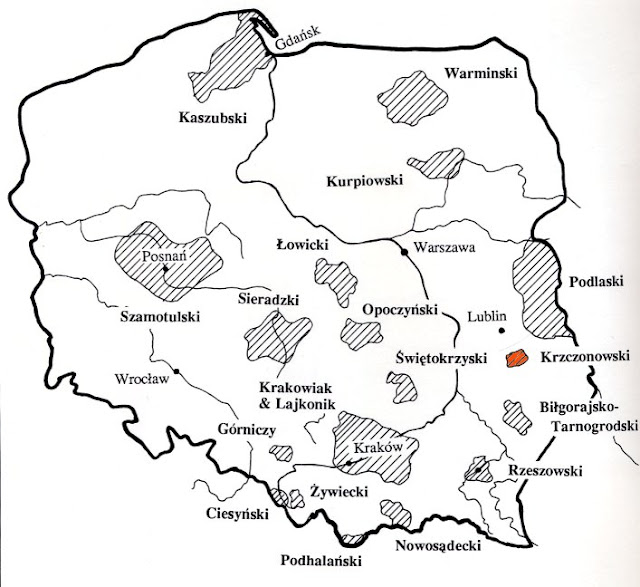 For the sake of those of you who may be unfamiliar with Polish orthography, Krz is pronounced 'ksh', like a bus door opening, czo is pronounced  'cho' as in chocolate, and ow is pronounced 'oof' like someone punched you in the stomach. So Krzczonow is pronounced 'Ksh-cho-noof', except that you only get one syllable for each vowel, so try to pronounce Kshcho as one syllable. This is often called the Lublin Costume as it is the best known costume from Lublin Province. It is not from the city of Lublin.
I have a couple of personal ties to this costume. In college I was a dancer with the Oakland University Slavic Folk Ensemble, and in my time we had a Polish Choreographer teach us a Polish Set. We made these costumes. This costume is a good one for an amateur group, as it is relatively well known, colorful, attractive, and easily made from materials that you can go out and buy, as opposed to say the Zakopane or Lowicz costumes which are beautiful, but require specific sorts of cloth that is not easy for people outside Poland to obtain. Also i have been long fascinated in figuring out how the particular embroidery is done, but that is a topic for the next posting.
Here are a couple of images to help you get acquainted with this costume. 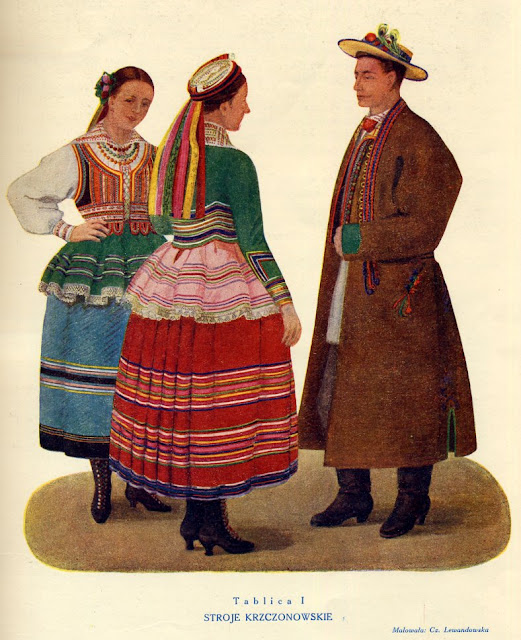 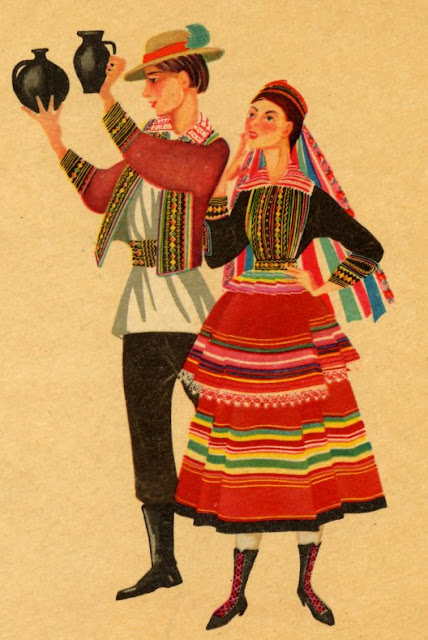 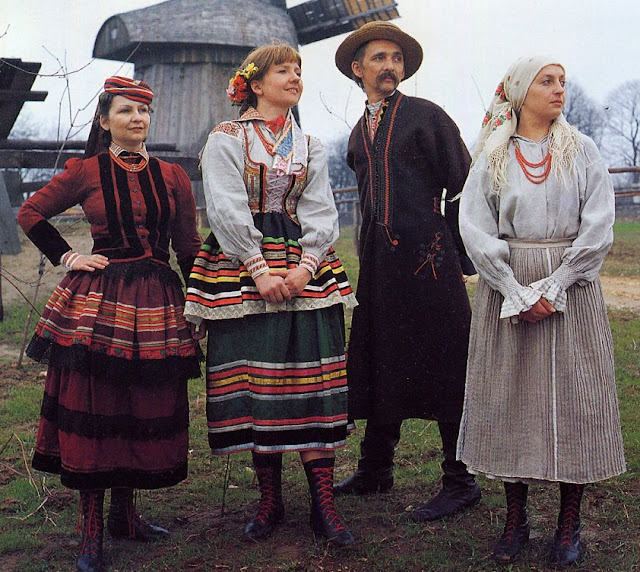 In this last photo, the woman on the right is wearing the 18th century costume which i will not be covering in this posting. The woman's costume is based on the chemise, although it is  not as prominent as it is in many eastern European costumes. The cut is identical to womens shirts in western Ukraine, with two separate body sections for front and back, an 'inset' przyramek in Polish, sewn on top of the body pieces, the opening then gathered into the collar, which in this case is a sort of wide 'sailor collar', and sleeves sewn perpendicularly. Here is the cut of the woman's chemise and other costume pieces.

The chemise is embroidered on the cuffs, collar, shoulder pieces, and sometimes around the front opening with particular Kzczonow embroidery, later replaced by cross stitch.
The Skirt is sewn of store bought wool, in 'quiet colors', a quick glance at the various images indicates a wide range of colors. There is usually a band of velvet or other dark cloth on the bottom hem, a short 'brush fringe' on the hem itself, it is very full and rather long, coming to the top of the low, typically Polish lace-up boots.
In the center of the skirt are sewn several different bands of ribbon of different colors, widths and designs,
usually forming a palindromic effect, with a particularly wide and patterned ribbon forming a center, and symmetrically placed ribbons of other colors above and below. There seems to be a minimum of three to five ribbons, although many more are often used.
The apron is unique, in that it is basically a short version of the skirt, gathered into a waistband and wrapping completely around the body. It is also sewn with several ribbons, and is usually edges with lace.
again, a couple of images to give you a good idea. 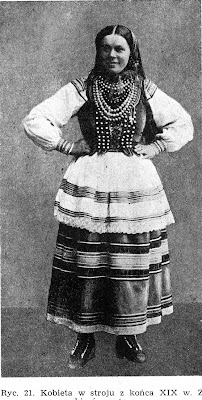 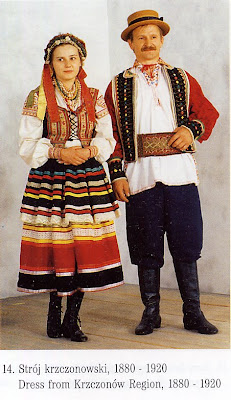 The bodice is the typical Polish lace up type, known as a gorsetka. The cut is shown on the bottom right of the diagram above that shows the cut of the chemise. It has lappets around the bottom, very typical for Malopolska, and it is decorated with rows of ribbons sewn on vertically to either side of the front, and around the bottom edge just above the lappets. The lappets are edged with ribbon. The gorsetka itself is made of a dark quiet color, like black or burgundy. Here are a couple of examples. 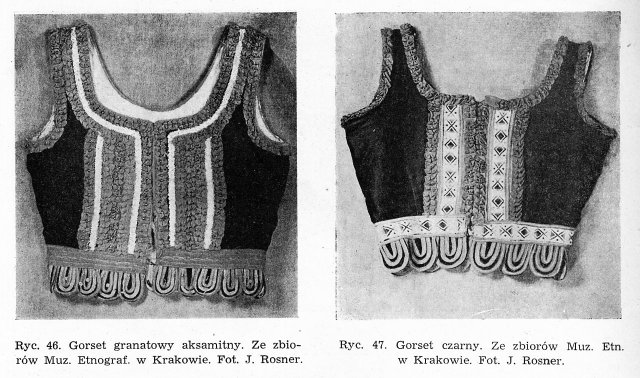 Of course, several necklaces would be worn to complet the costume. For unmarried girls, the hair was worn in braids which were wrapped around the back of the head. A headress in the shape of a horseshoe was worn on the back of the head, covered with artificial flowers, and with ribbons falling down behind. At her wedding, this would be replaced by a full cap of artificial flowers, with beads and ribbons around the edge, as seen in the colored photo above. Here is a photo showing the hair arrangement. 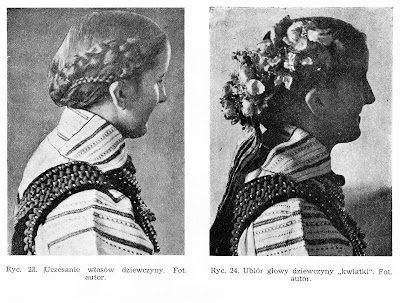 In cooler weather women would often wear a short jacket, the kaftanik instead. This was also considered to be appropriate for women 'of a certain age'. This custom was widespread in Poland and elsewhere. I am running long, so i will devote a separate posting to the mens and womens kaftan.

The Mens costume is based on a shirt which has a cut identical to the womens, except the collar is smaller, and the shirt itself is shorter. It is worn outside the pants. It has embroidery like the womens, but with no or less extensive embroidery on the shoulder. Here is a diagram of the cut. The pants were linen in summer, but for cooler weather or special occasions they were made of black or other dark material. 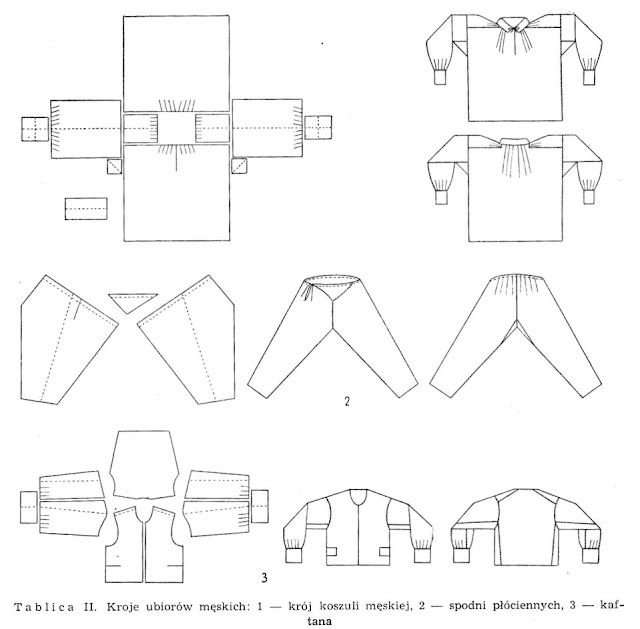 Often there was a vest worn with the costume, either black or white with buttons and pocket patches of the opposite color, as seen in this old photograph. 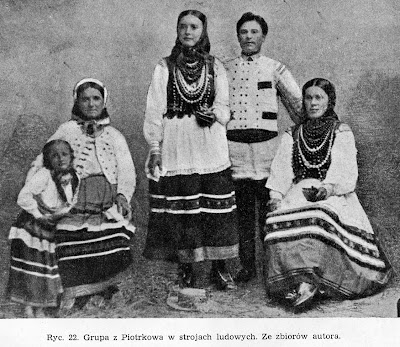 Over this was worn a long heavy overcoat, as seen in some of the images.  But what has come to be worn most often is a jacket, called the kaftan as it is the most unique to this costume. The cut is shown above, It was decorated with rows of ribbons down the front and around the waist, with bands of black cloth overstitched and with reverse applique.Again, I will have to take a seperate posting to talk about this. I will close with this photo of a wedding group. 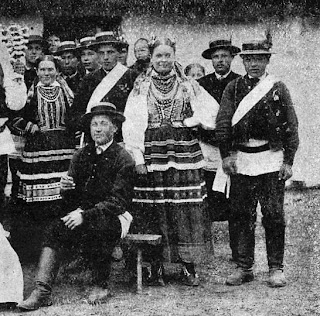 Thank you all for reading. If you have any requests for research, or comissons to make costumes or embroidery, please let me know.
Thank you,
Roman K.

Here are a couple of links to  sites showing more of this and other Polish costumes.

This is the famous Polish Song and Dance Ensemble Mazowsze, perfoming their Lublin Suite, featuring this costume.
http://www.youtube.com/watch?v=9Ypug6wCC1c

Here is a link to the Folk Dance Ensemble 'Slowianki', of the Jagiellonian University in Poland website, showing some very good photos of this costume and others. I would like very much to be able to see them perform, oh well. Click on the images to enlarge
http://www.slowianki.uj.edu.pl/galeria.php?send=1&gal=16&id=stala
Here is one of their photos, just to give you an idea. 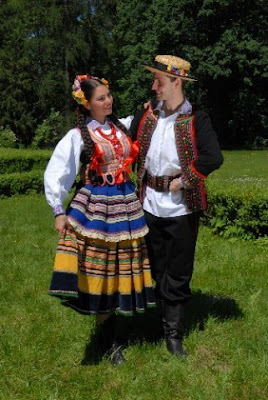 OK, i found a video of Slowianki doing dances from this region; they are pretty good.
http://www.youtube.com/watch?v=_LDsXsk30BI&feature=related

And here is a link to a company in Krakow called Perfekt, who make and sell Polish [and some other] Folk Costumes for stage groups and others. They are quite good for stage costumes, although not the equivalent of having one made in the village, which would be very difficult.
.http://www.perfekt.krakow.pl/stroje/lublin
﻿
Thank you very much again