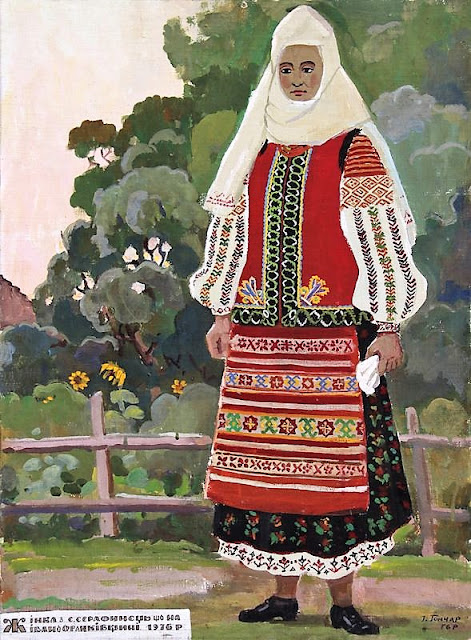 Hello all,
Today I will talk about a costume which seems to be restricted to one village; Serafyntsi in Horodenka district, Pokuttia, Ukraine. This village of a couple thousand people lies in the southeast of Horoden'ka district, in the easternmost part of Ivano-Frankiwsk Oblast, not far from the Dnister. Here is a map showing the location of Horodenka district. 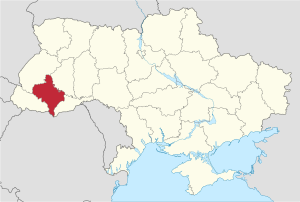 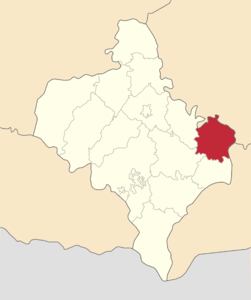 In some features, this costume is typical for Horodenka district, and in others it is unique.
The image at the head of this article is of a painting by Ivan Honchar, who did much work on Ukrainian folk costume and embroidery, especially in central and eastern Ukraine. Compare the painting with this photograph of Hanna Luchytska, taken in 1902. 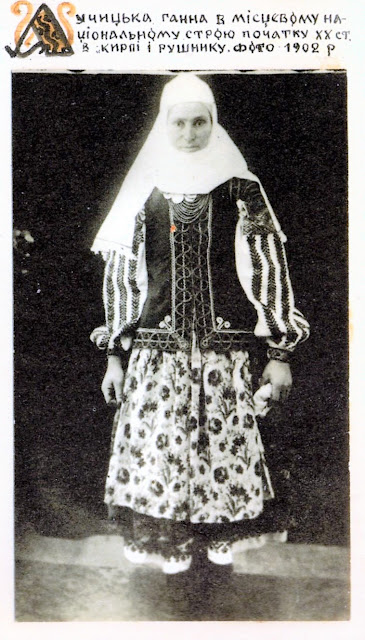 The basic garment, as everywhere in Ukraine, is an embroidered chemise. The ustawka, or shoulder piece, is set in parallel to the body, and is gathered together with the front and back fields into the neck. The sleeve embroidery follows the three part canon common to the region from Podillia down to Moldova. The shoulder piece has dense embroidery, often in horizontal stripes, the upper sleeve has a more monochromatic strip, usually done in brick stitch, and the lower sleeve has vertical stripes of embroidery. The collar, cuffs and hem are also embroidered. 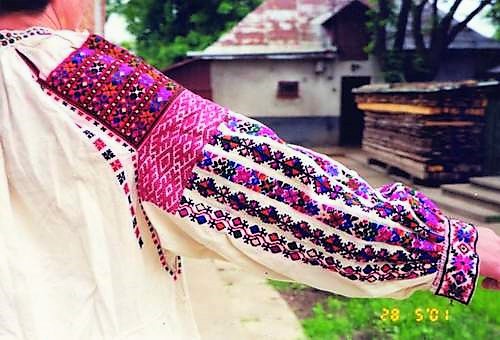 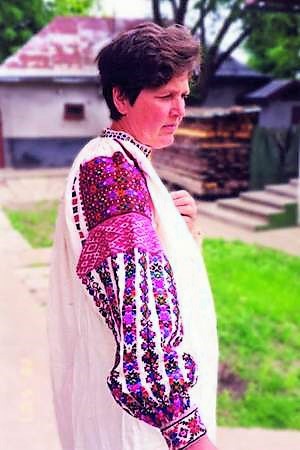 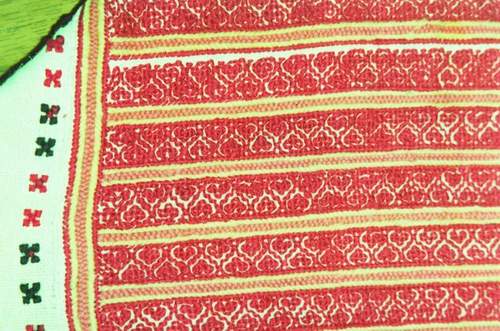 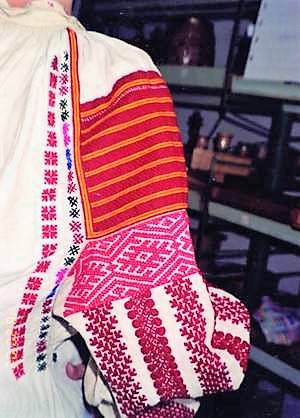 In this example the central monochrome band is a very pale yellow. Note that there are also stripes of embroidery edging the shoulder piece, on the edges of the body piece, and on the front to either side of the opening. 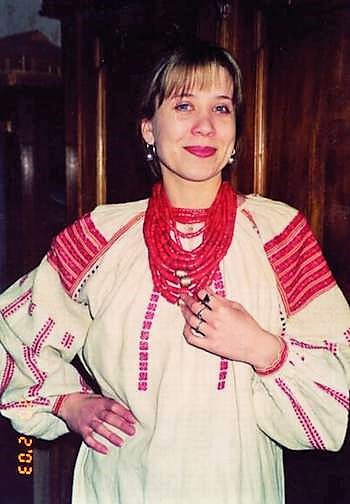 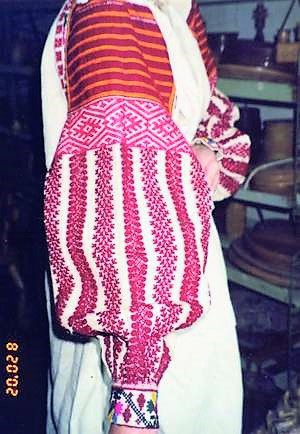 Here is a more colorful example. The range of colors used is increasing in recent years. 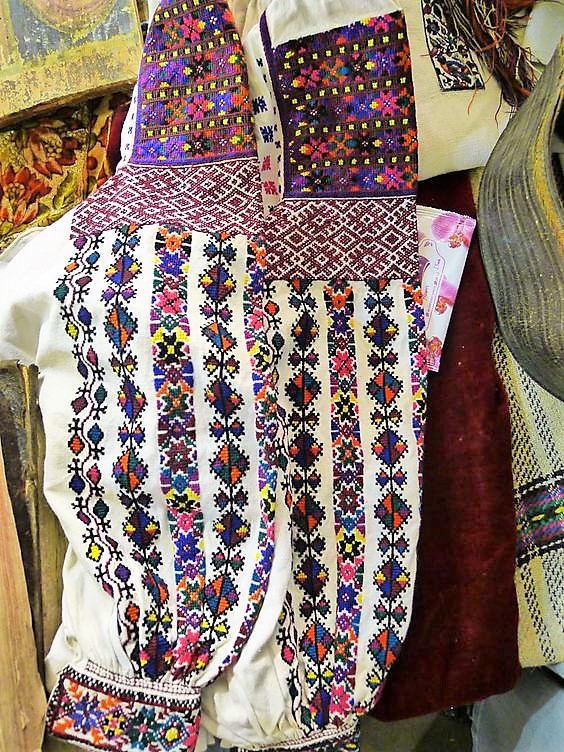 As you can see here. The birds were taken from graphed designs from western Europe. 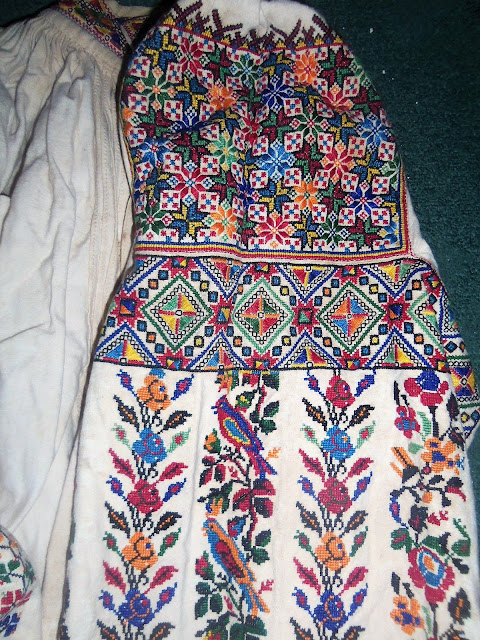 Some newer examples are very full of color. 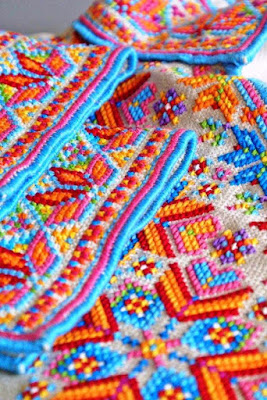 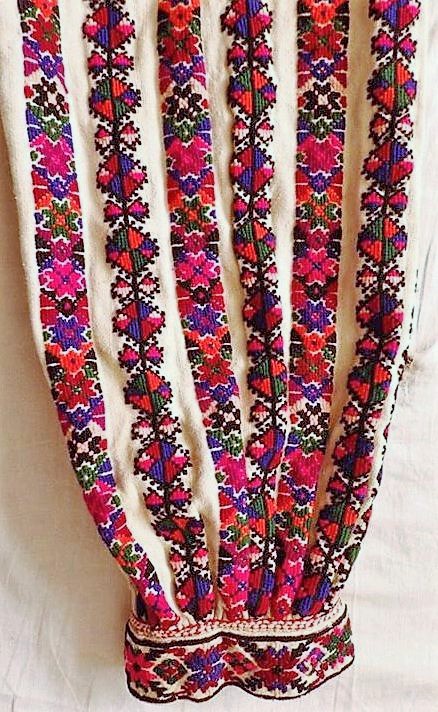 As in most places, older women tend to wear darker colors. 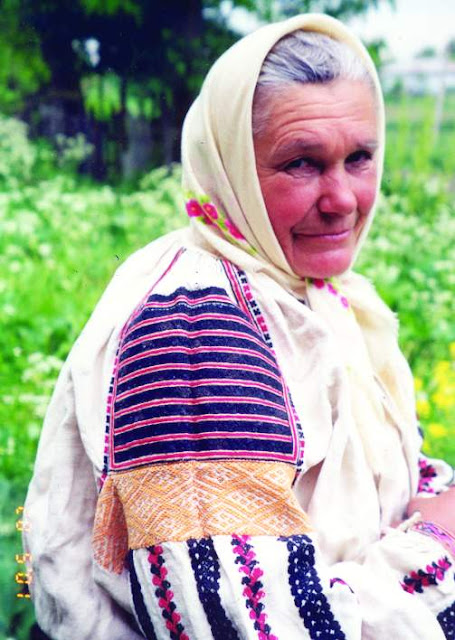 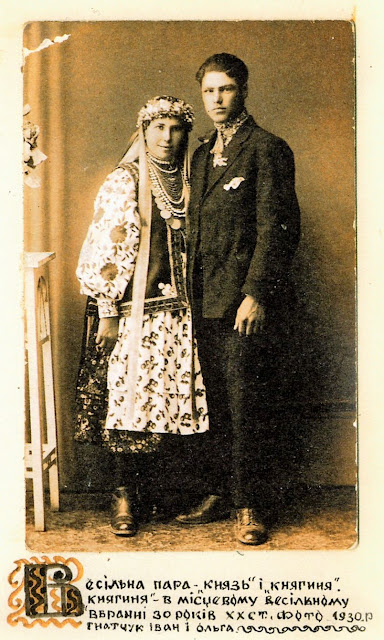 This village also has another garment which is called 'riklya'. This is a skirt with an attached bodice, which, while not unknown in Ukrainian costume, is rare. The riklya is generally made from solid colored cloth. These apparently were sometimes worn without aprons. 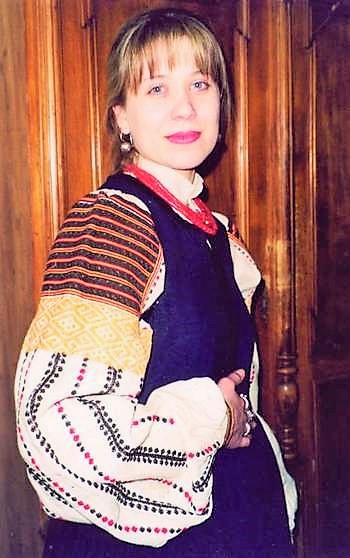 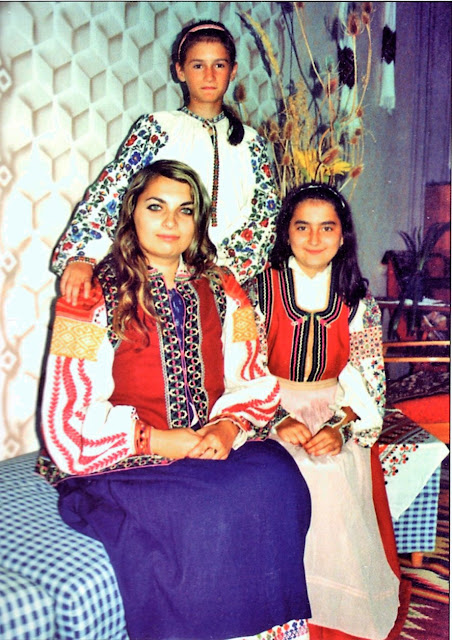 The vest is unique to this village. In general lines it is similar to the kersetka of central and eastern Ukraine, but here is called horsyk. Also the front opens in the center and does not overlap. It is, however, longer than vests that one usually sees in western Ukraine, and is very full in back. Here is Kul'chytska's drawing of this costume.

The horsyk has ornamented bands around the neck, the hem, and the armholes. They are usually decorated with interwoven bands of rickrack, and some embroidery. 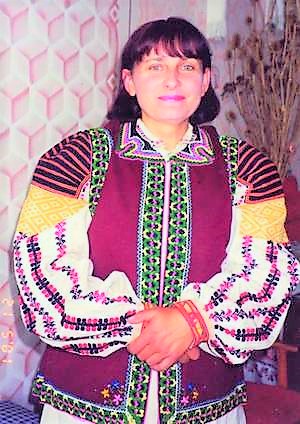 The back has a box pleat in the center, and then the skirt part is pleated to either side. 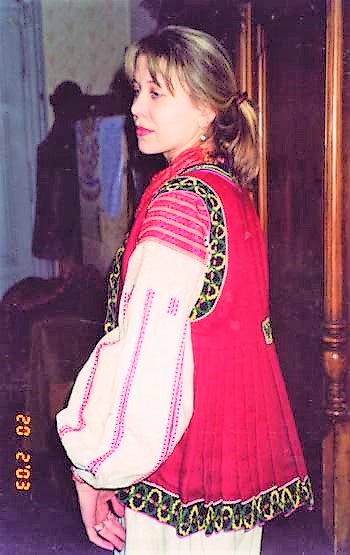 There is an embroidered ornament in the center back just above the seam. 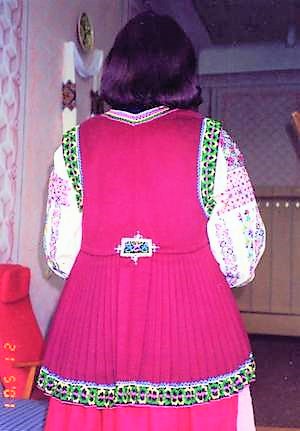 Necklaces were, of course worn here, as everywhere in Ukraine. 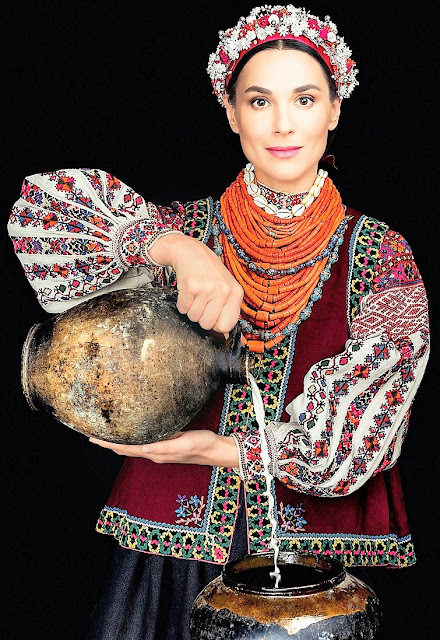 You can see multiple views of this garment at Krovets'
https://krovets.com.ua/uk/nagrudniy-odyag/kersetka 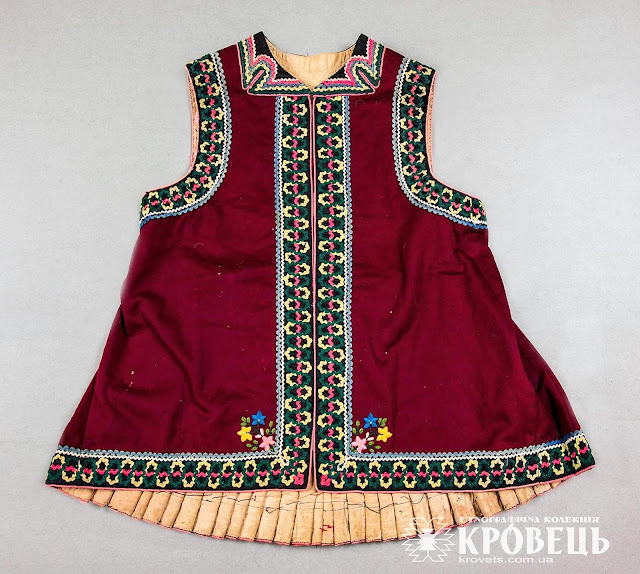 For cooler weather, or perhaps for older women, they wore a jacket that was made exactly the same way but had sleeves.
https://krovets.com.ua/uk/verhniy-odyag/kabat-zhinochiy 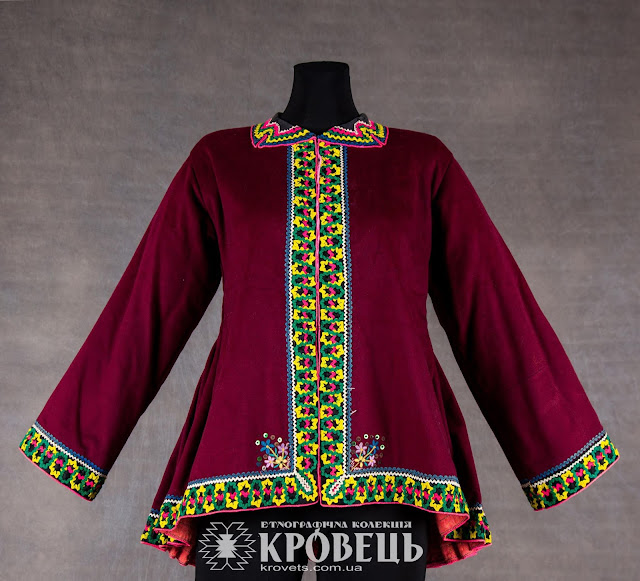 Today you see older women wearing kerchiefs, but traditionally married women put their hair up and wore a cap, over which a long cloth was wrapped. This cloth is usually called peremitka or namitka, but in this village was simply called rushnyk. It had woven ornament on both ends. 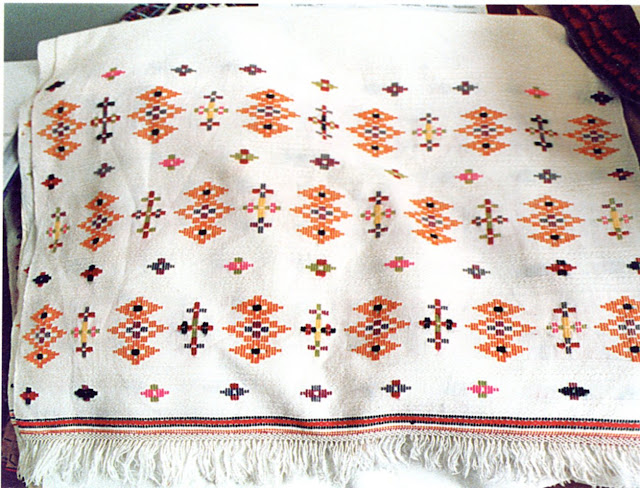 Just a few more images of this costume. 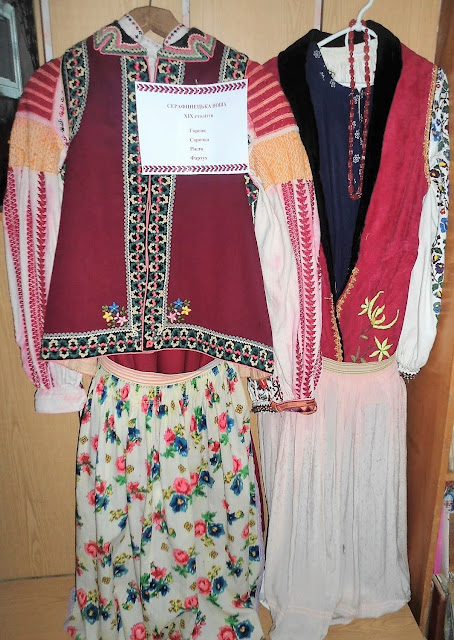 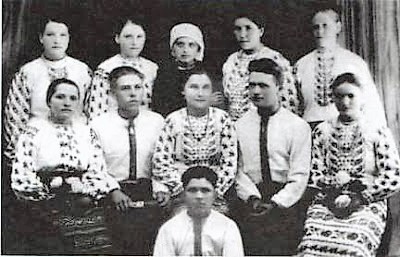 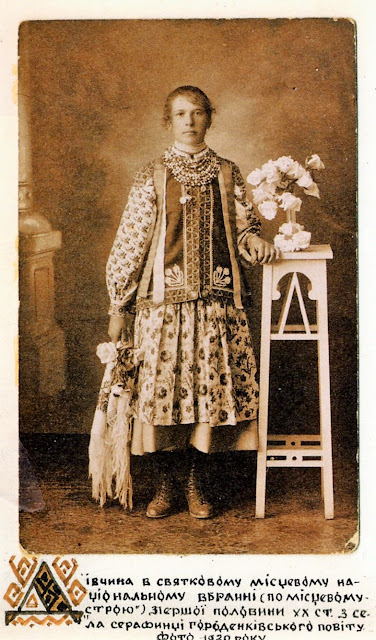 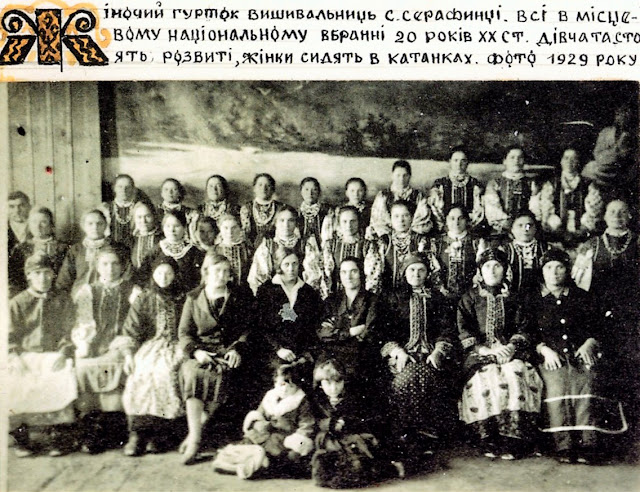