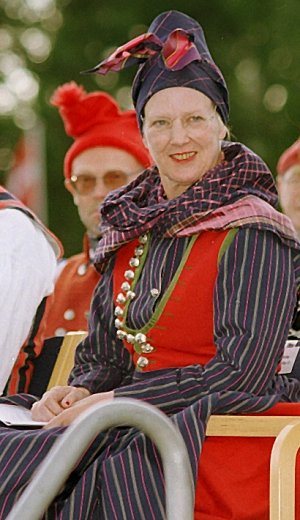 Hello all,
Above is Queen  Margrethe II of Denmark wearing the Rømø costume which was gifted to her by the National Folk Dance Association of Denmark. This is not the most impressive or colorful costume of Denmark, but it is the one she requested. It is quite representative of the costumes of Sønderjylland, [South Jutland], the southern part of the Danish peninsula. Rømø is an island off the southwest coast of Denmark. 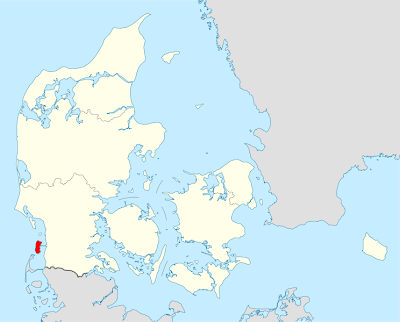 The foundation of the costume is a chemise and petticoat, which do not show when fully dressed.

The blouse and apron are made of dark cotton print with a fine design. They may match, as in the photo above, or they may be made of different prints, as in this photo. If they are different, the blouse is usually calico, while the apron is striped or plaid. 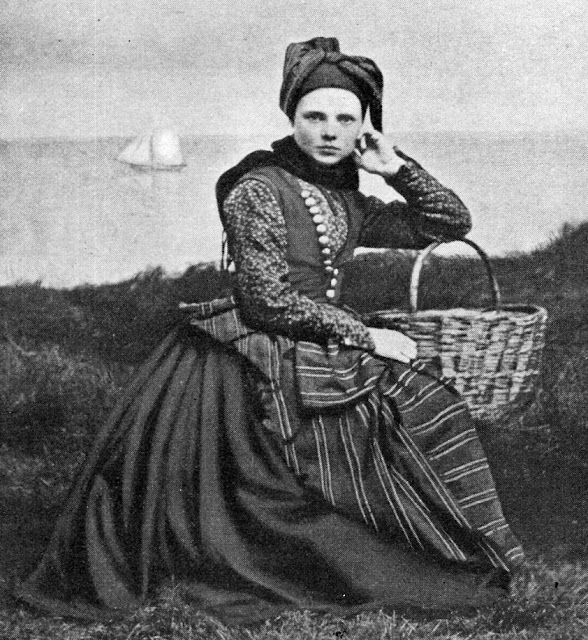 There are many options for these two costume pieces. The blouse has two small silver buttons on the front, implying that it is double breasted.
The bodice and attached skirt, called Pi, are of red homespun wool called vadmal with dull green edging on the bodice. The bodice has a curved neckline, and many round silver buttons. The skirt is quite full. The apron is very full and long, being barely shorter than the skirt, and the back of the apron is closed with a silver buckle, which is typical for Jutland. 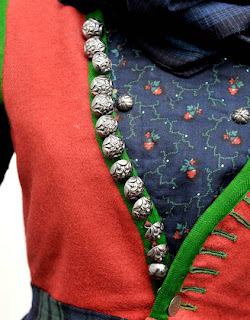 Some photos show the buttons on the left side. I do not know if there is any significance to this, or if indeed, some photos have simply been flipped. Publishers like to do that. Or perhaps whoever sewed this outfit thought that a woman's garment had to fold right over left. 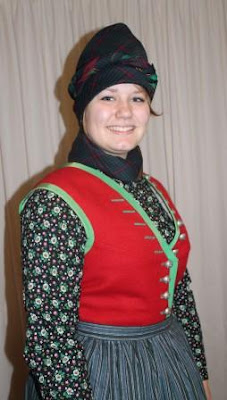 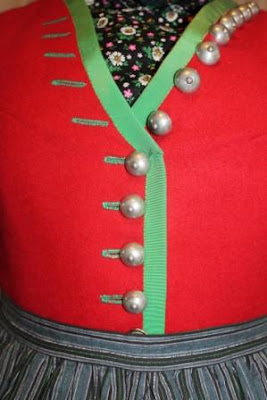 There is a kerchief worn over the shoulders which is not tucked in in the usual way, but worn more wrapped around the neck. A cap is worn on the head over the hair and then another kerchief is tied over that, the cap itself not showing at all. 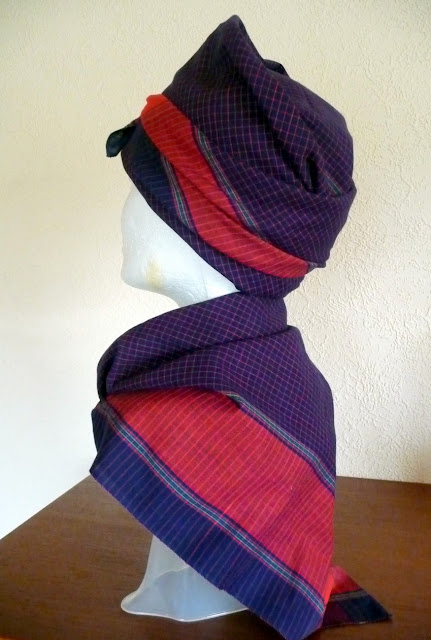 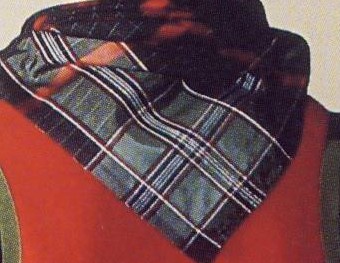 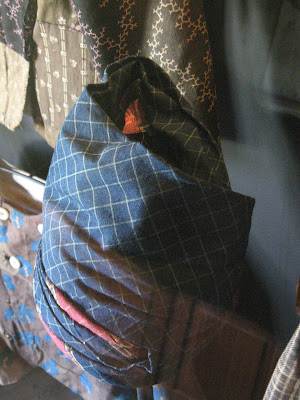 The combination of quiet colors with red accents is typical for this costume. 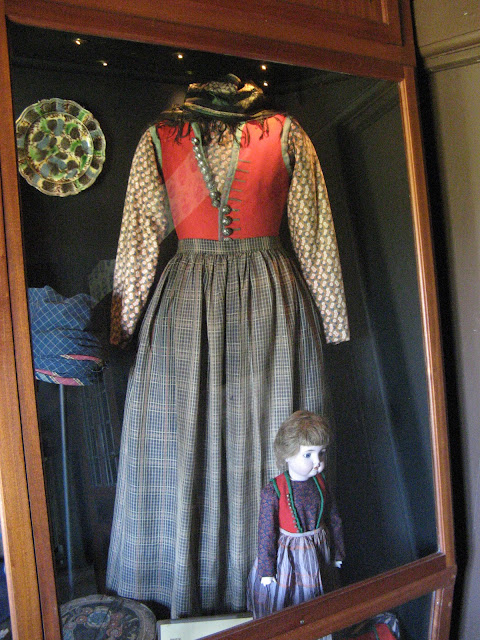 Notice that in this example the cap has embroidery on the top, and so the crown is left uncovered. This type of embroidered cap is more typical of the East Danish Islands.

The formal Church-going costume covers the red Pi and blouse with a jacket and skirt sewn of fine material. A more formal bonnet with white lace edging is worn with this version. A silk kerchief and apron may be worn with the dress costume. 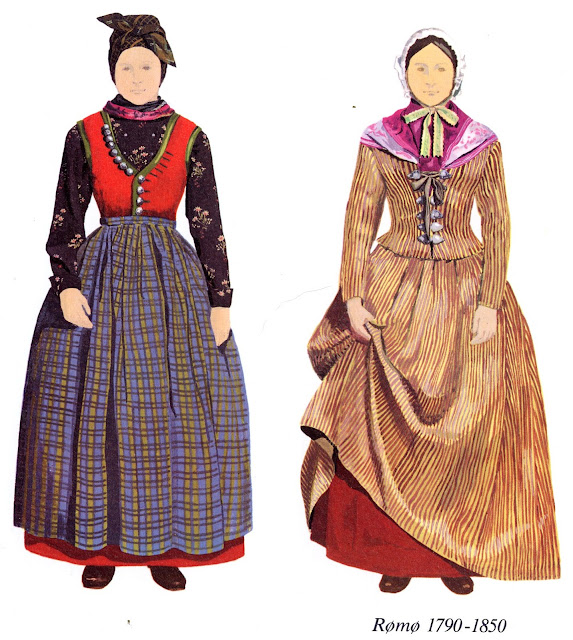 I wish I had more information about this costume, but this is what I have.
I hope that you have found this interesting and informative.
The Danish people have an emotional attachment to this costume. Just a few more images, ending with the Queen again. 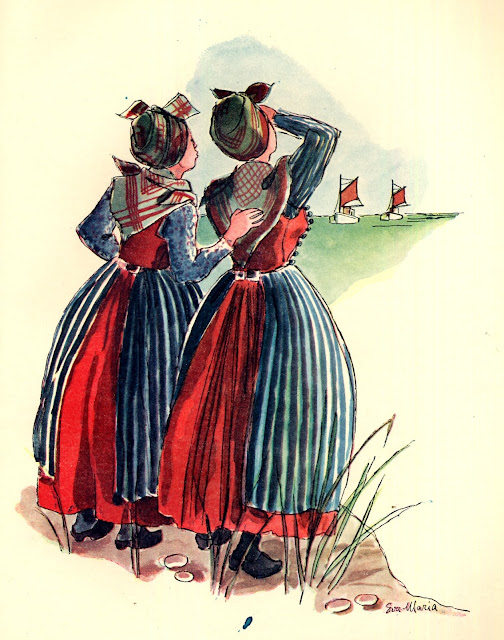 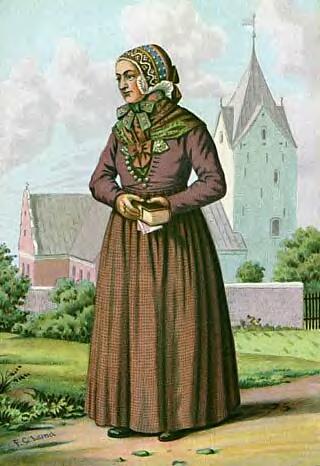 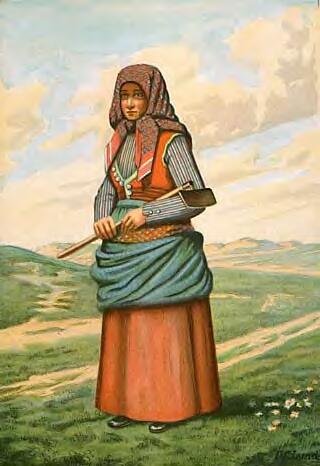 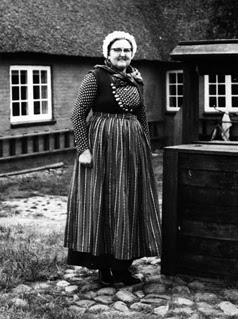 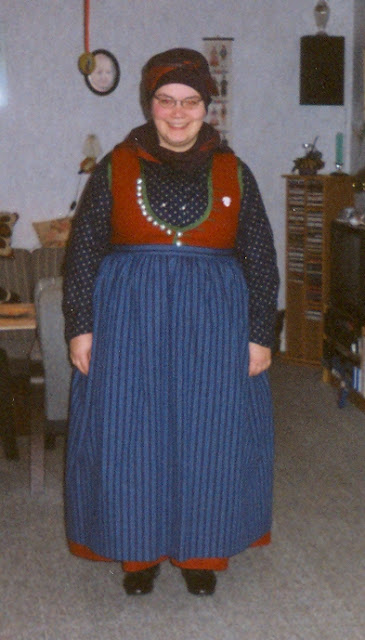 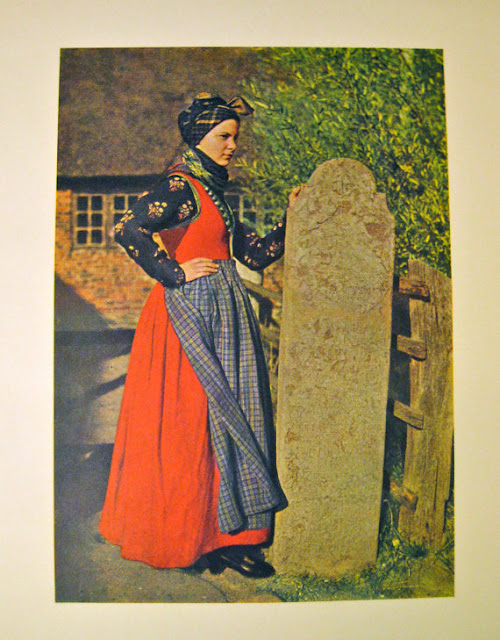 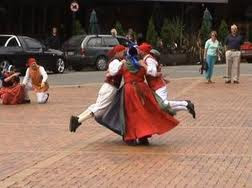 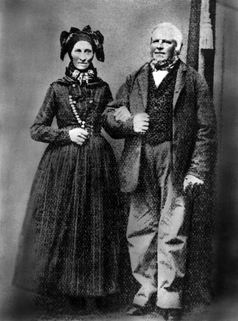 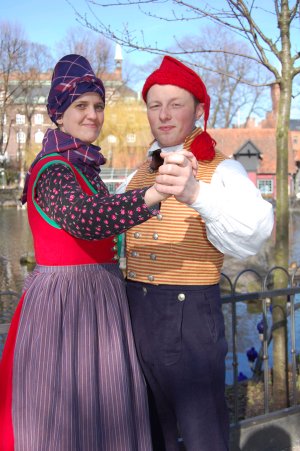