Hello All.
Today I am going to do a lazy posting. I have written a bit about Hutsul culture. Today I want to give some examples of the unique embroidery of the town of Kosmach. I gave some examples in some of my former postings of Hutsul embroidery. Kosmach is still a big center for the folk arts. I would recommend vistiting there for an arts festival or somesuch. It is in the north of Hutsulshchyna, not far from Kosiw. The overall impression of the Kosmach costume is a bright golden-orange. Here is a photo of a woman in Kosmach costume, embroidering [or more likely just posing with] a black vest, which is sometimes worn instead of the Kyptar, as they are easier to make. 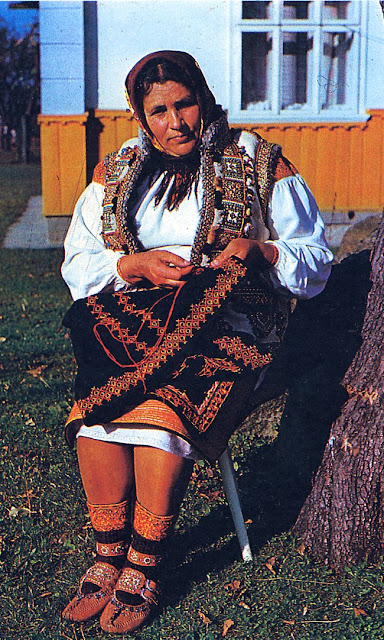 i covered the rest of the costume in a previous posting. Today i want to concentrate on the cross stitch embroidery. You can see it on the shoulder insets of her chemise. Sometimes there is a very clear design that stands out, as in this example. 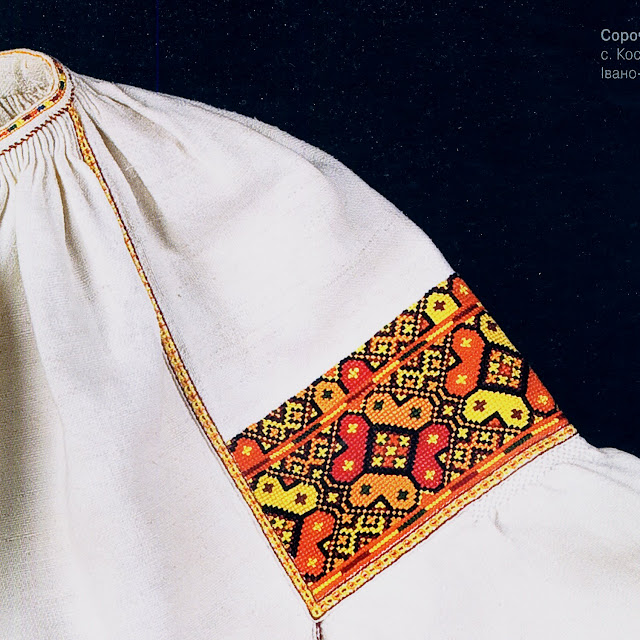 ﻿
You will notice the distinctive color combination iummediately, with golden yellow predominating, but including also black, burgundy, and bright yellow. Often, other colors are introduced as well, as accents, including green, violet and bright blue. This sounds like a very strange combination, but it works. They often use variations of typical Hutsul designs and add more colors to them. Sometimes the basic design is obscured, and yet the result is very pleasing. It always reminds me of an ear of Indian corn. Here is one example.

And another, in which the design is less clear. 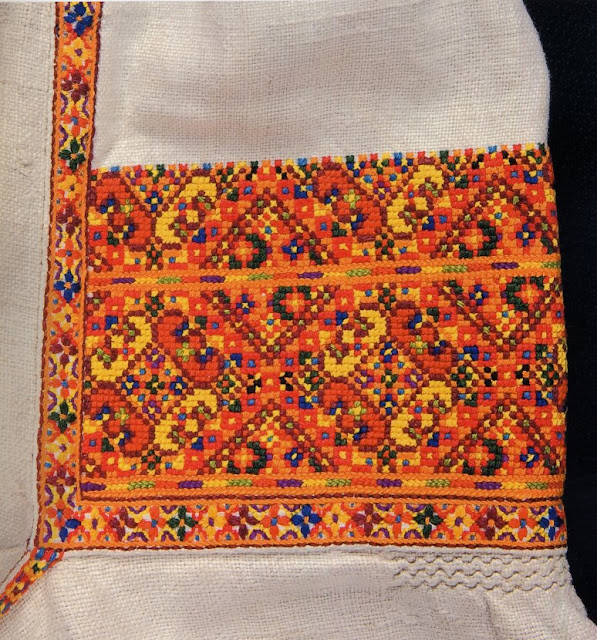 This is very hard to graph, and it points out the importance of getting just the right shades of color. Here is an example of an attempt to graph one of these designs. I always thought it was horrible, untill i realised that they printer simply did not have the correct shades available, and it was only graphed schematically. I will first give the graph, and then a photo of a very similar design. 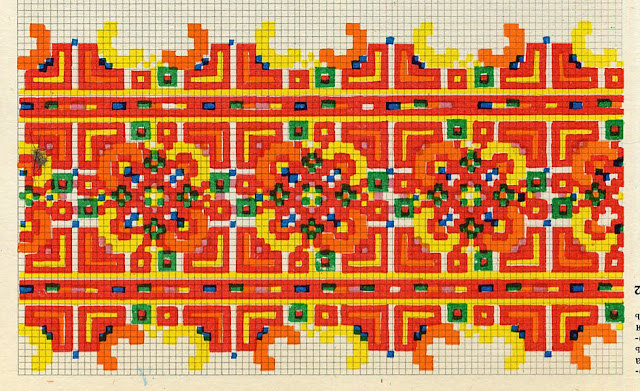 Although  the embroidery is mostly in cross stitch, they also use other stitches, especially on the collar and cuffs, and also in the edge seen above.
Here are some examples of the narrow designs. 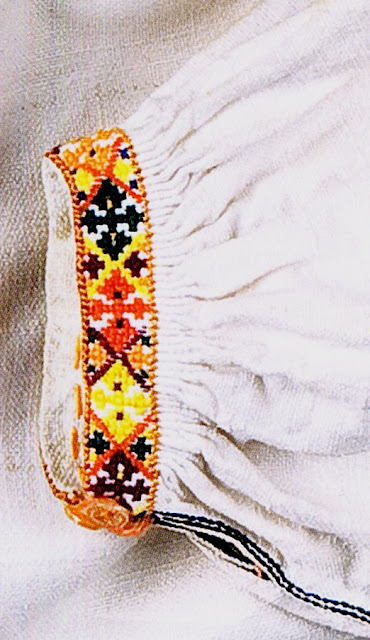 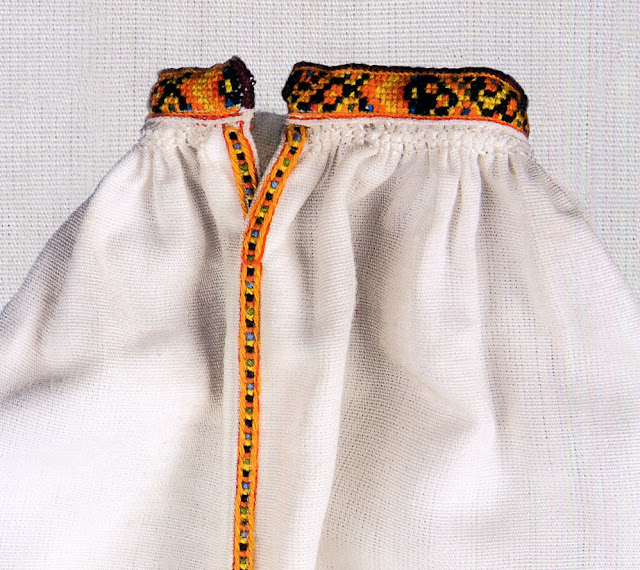 Here is one example that is very popular and copied often. 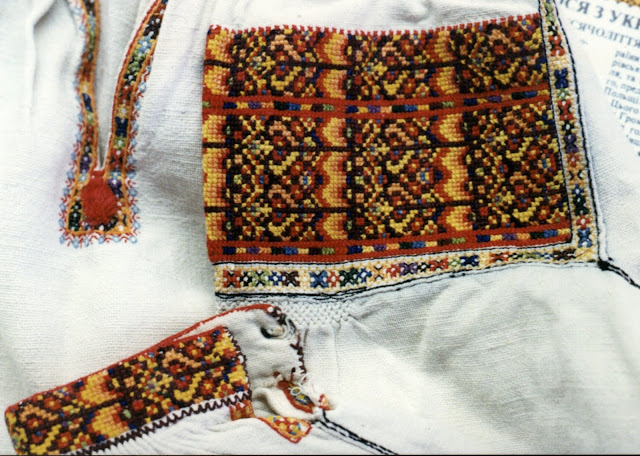 Yet another example of a variant of this design

\
And again the same design adapted to a modern piece of clothing. 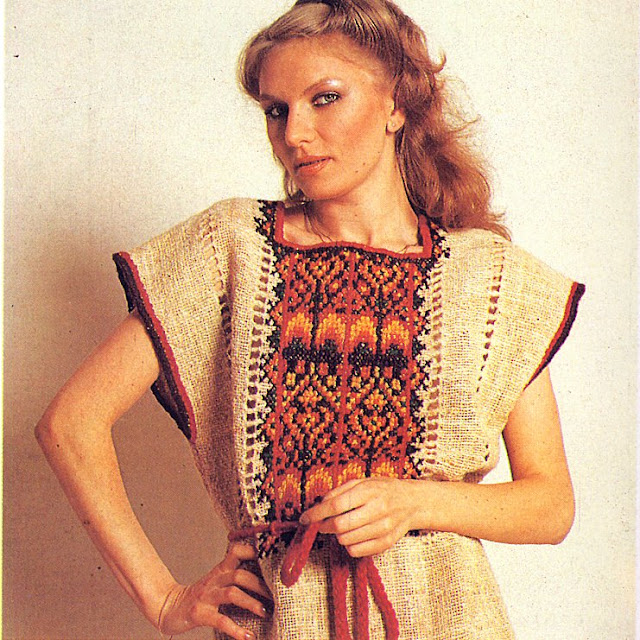 I dont know what more to say, except to give you more examples and tell you to enjoy.

﻿Thank you all for reading. A very visual post today. Sometimes words do not add a whole lot to the images.
This is a fine example of how one local tradition can develop variety within a very distinct style.

I love doing this, and would like to somehow turn it into my career. A pipe dream, most likely, but I am enjoying myself.

Roman K.
Feel free to contact me with requests for research. I hope to eventually cover all of Europe and the Former Russian Empire/Soviet Union. I also gratefully accept tips on source materials which i may not have. I also accept commissions to research/design, sew, and/or embroider costumes or other items for groups or individuals.