The 5 types of Russian folk Costume

Hello All,
I made some reference in my last posting to the 5 types of Russian folk costume, and I thought that I would do a quick summary to introduce them. I should do the same for the 5 types of Ukrainian Costume. That will be forthcoming.
These refer stictly to the women's costume. The men's costume does vary, but not a whole lot. Shirt, usually with opening on the side, usually on the left, pants, narrow sash, boots or footcloths with lapty, Overcoat.

Type 1 Sarafan.
I have seen this term translated as 'jumper', which works for Americans, but not for the British, also as 'sundress', which is rediculous, it is better to just use the Russian term Sarafan. This garment is basically a long skirt, worn just below the arms with straps over the shoulders. A Chemise is worn underneath, the collar area and sleeves showing. It may be belted or not. Here is a drawing by Max Tilke showing three ways to wear what might be called the 'aristocratic' version, although this was worn by peasants. 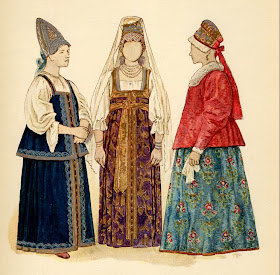 The woman in the middle is wearing the Sarafan by itself, with a Chemise, the one on the left is wearing it with a vest, cut basically the same as the Sarafan but shorter, and the woman on the right is wearing it with a jacket. This type of Sarafan is called 'kosoklyny', which means 'angle-cut', and was made from rich bought material, velvet, brocade, damask, etc. Often decorated with ribbons, galloons and metal lace.
Max also gives us the cut, the side seams are at a 45 degree angle.

As you can see, you basically end up with a cone shape. Sometimes there is an opening down the front, with buttons. There are other cuts used. One which is more typical for ordinary peasants is basically cylindrical,
narrowed into a top band with pleats or gathers, of locally produced or home woven cloth. There is quite a variety of detail in these outfits, and the accessories vary quite a bit. Here is one example from the village of Zhemkova, county Syzran, Province Symbirsk, made of hand printed calico. You can see the gathers at the top.

Here is a back view of another example from the ﻿Province of Vologda, Solvychegod county. This one is made of home woven cloth in a small plaid. You will see the pleats sewn down along the top edge. The chemise is made of cloth with woven in ornamentation.

Here is the cut and layout of this type of Sarafan. There are variations on both of these types of cut. 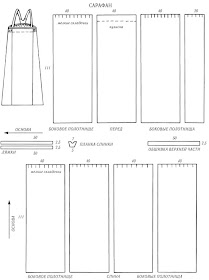 So the Sarafan can be very rich looking or very homemade looking. Each has its own beauty. This is the primary costume form to be found in North Russia, although it has also made inroads into the South. The dividing line between North and South is about the level of Moscow.

In Russian, this is spelled poneva but pronounced paniova. See my posting on Kaluga costume for more information. The Paniova is typical of South Russia, and is older than the Sarafan. It consists of three loom widths of a checked material sewn side by side and then rolled into a waistband, and tied around the waist over the chemise. Here is an example of one from Orlov Province. This is often considered to be the Russian equivalent of the Ukrainian Plakhta. 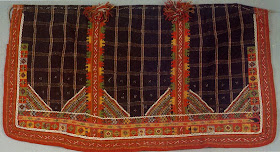 The Paniova is usually woven in black or dark blue, with white lines forming a checkerboard. As in this case, it is often ornamented with embroidery, ribbons, woven strips, galloons, etc. in a way distinctive to each region. Originally it was worn open in front, like in this postcard showing a costume from Orlov. 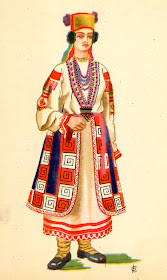 In some regions a fourth panel of a different material was added, to make the Paniova into a closed skirt.
Here is one example from Tambov Province, Spas County, village of Dubrava. 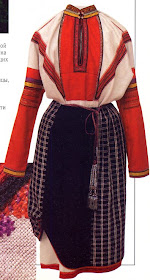 You will note that this Paniova is very lightly ornamented. The chemise shows the triangular yoke insets which are typical for some areas of South Russia, as opposed the the rectangular insets we see in most Slavic Nations. These two, the Paniova and the Sarafan are by far the most widespread types of Costume.

The Andarak is an actual skirt, usually of wool with woven stripes. This term is also found in northern Ukraine, to refer to similar types of skirts. This costume is uncommon, and is connected with the 'Odnodvortsi', a group of people who may be descended from colonists, merchants or mercenaries from the Lithuanian Empire, which at the time included Ukraine and Belarus. I admit to not being very clear on the identity of the Odnodvortsi. Here is a photograph of two women of the Odnodvortsi, taken in 1908 in Voronezh Province. You will notice the hem of thc chemise showing under the Andarak. 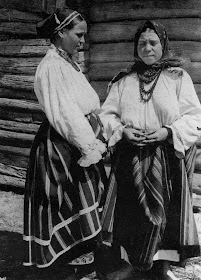 ﻿
Here is a festive costume from Tula Province.

In Tambov Province, the Andarak was often embroidered right over the stripes.Here are two examples. 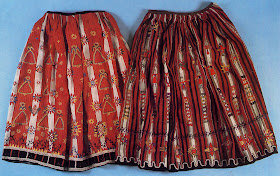 ﻿
This costume was only worn in scattered locations in parts of South Russia.

This is an actual dress, with sleeves integral to the construction of the garment. This is rarely found, only in the far south in the Don region. It is clearly derived from the Costumes of the Caucuses. Here are two of the very few images I have ever been able to find of this type of costume. 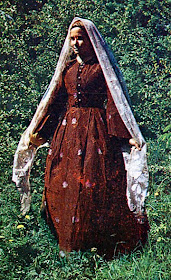 This type is from a much later period than the others, being basically an 19th century creation. It may be considered more a period costume than a folk costume, but it is widely used by performing groups, especially those from regions further east, in Siberia and other places which were colonized by Russians relatively recently. It consists of a skirt and jacket with a peplum sewn from factory made cloth, and to American eyes looks very much like Pioneer Costume. ﻿Here is a drawing of this type of costume. This one is quite a bit longer than usual. It is more common to see the hem at the level of the second flounce. 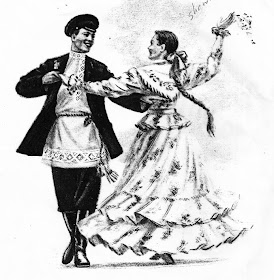 Here is a photograph of a version of this type of costume from Arkhangelsk Province.

Here is a photograph of a Quadrille being perfomed in Astrakhan Province. 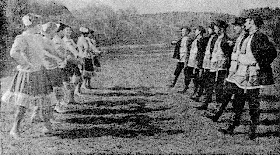 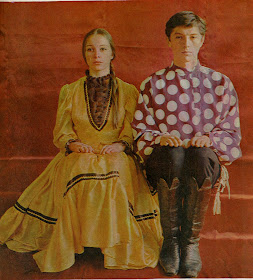 For those who might be interested, here is a schematic of the bodice/jacket, in Russian called Lif-baska. 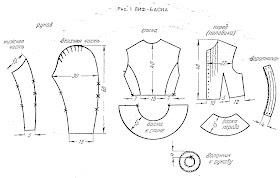 Thank you all for reading. This is only a very basic overview of Russian Folk Costume. I will be posting more detailed examinations of local costumes in the future. I hope that this was interesting and informative.

As always, please feel free to contact me with research requests, or commissions to design or make or embroider costumes or other items for a group or individual.